Jails and federal prisons in California and elsewhere are adopting new treatment guidelines for latent tuberculosis infection based on research showing that it can be treated effectively during a much shorter period.

A recent study led by local and state health officials compared the new and more traditional treatment protocols in the jail system of Santa Clara County. It found a 12-week two-drug regimen is as effective as the traditional nine-month single-drug approach to treating latent infection, which is not contagious but without treatment can progress to active disease. Plus the shorter regimen significantly boosted the percentage of inmates who completed treatment.

“Essentially what we found was a huge improvement in the completion rate for latent TB infection,” said Maria Juarez-Reyes, lead author of the clinical trial and an assistant clinical professor at Stanford University.

Santa Clara County has California’s fifth-largest jail system, with approximately 4,000 inmates, and the state as a whole has nearly double the national incidence rate of active TB, a highly contagious bacterial infection that can be fatal if not treated properly.

The Centers for Disease Control and Prevention reports that 4 to 6 percent of active TB cases are diagnosed in correctional facilities, where the population is considered at high-risk because of close living quarters, a history of inadequate medical care, underlying medical conditions such as elevated rates of HIV infection and higher levels of substance abuse.

Treating active TB is a high priority, but public health officials are also concerned about the incidence of latent TB infection, in which a patient tests positive for TB but is not yet sick. Over 6 percent of California’s population — 2.4 million people — is estimated to have latent TB, and the majority of those infected don’t know it.

Treating latent infection in jails is a cornerstone of the strategy to suppress TB, because it prevents the infection from progressing to active disease. Yet such treatment often falls short. The CDC found only about a third of inmates complete the traditional nine-month, twice-weekly treatment regimen with isoniazid, a widely used antibiotic. The completion rate was even lower — 18 percent — at the Santa Clara County Jail.

“To complete treatment is very difficult because it takes too long,” said Juarez-Reyes. “The average length of stay was three and a half months before they were transferred or released.” When they were released, inmates would receive information about county TB clinics where they could complete their treatment on the outside, but the follow-up rate was “very, very low.”

Juarez-Reyes and her fellow researchers reduced the doses of medication from 72 to 12 and shortened the duration of treatment by two-thirds.

In 2012, the jail switched from the nine-month drug protocol to a regimen of 12 weekly doses of a combination of isoniazid and a second antibiotic, rifapentine. To assess the outcome, the researchers directly observed 91 patients who received the 3-month drug cocktail and compared their results to a similar group of patients who in the past had undergone the 9-month treatment.

The scientists concluded that the shorter regimen was as effective as the longer one and that the completion rate soared — from 18 percent to 85 percent.

“This is really fantastic,” said co-author Neha Shah with the Tuberculosis Control Branch of the state public health department. “The implication is we can get more people through treatment, treat them effectively before they break down and get sick and can infect other people.”

Researchers were also reassured to see the 12-dose regimen was well tolerated — even by jail inmates who have a higher rate of substance abuse, which can harm the liver. “We were worried that this regimen might lead to more liver damage, because it is once a week at a higher dose,” said Shah. But that’s not what happened.

“We found side effects to be few and mild,” she said. Only two of the participants discontinued treatment because of adverse drug reactions. 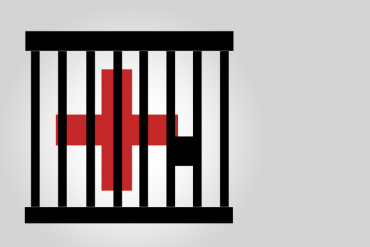 The Santa Clara trial is the latest in a series of studies that found positive results from a shortened regimen for latent TB. In December 2011, the New England Journal of Medicine published results of a large randomized control trial that found a 12-dose regimen of combination therapy, directly observed by health workers, was as effective as a 9-month regimen of daily self-administered isoniazid.

Two additional studies came up with a similar finding, according to the CDC.

Federal prisons have also recommended adoption of the shorter latent TB regimen. The Federal Bureau of Prisons’ October 2015 clinical practice guidelines for the management of TB state that the 12-week, once-weekly two drug protocol is now the standard treatment regimen. “It should be utilized to treat [latent TB infection] unless there are contraindications for its use,” according to the guidelines.

The traditional approach is described by the agency as “very effective,” and “the preferred regimen” for HIV-infected people taking antiretrovirals, as well as for children aged 2 to 11. According to the CDC, the 12-dose regimen “does not replace” other latent TB protocols.

The shorter treatment is not appropriate for every patient. According to the state, the 12-dose regimen is not recommended for children under the age of 2, HIV-infected people taking antiretrovirals (because of potential drug interactions with rifapentine), people presumed to be infected with a drug-resistant form of TB, pregnant women or women planning to become pregnant within the treatment period.

Studies also have found that the 12-dose therapy is more expensive than the traditional approach, primarily because of the addition of a second medication, rifapentine, and the cost of direct observation by health workers. The Santa Clara study noted that cost-effectiveness may be greater in a correctional setting, since the environment is more conducive to outbreaks, which bring higher “societal costs.”

The compelling results of the Santa Clara study, led by researchers at Santa Clara Valley Health and Human Services, as well as California Department of Public Health, have led to a change in treatment guidelines in the jail system. “The protocols mentioned in the study are now a standard in our jails,” said study co-author Alexander Chyorny, MD, with Adult Custody Health Services at the Santa Clara Valley Medical Center. Since the study was done, Chyorny said the therapy in the jail has been completed 65 percent to 75 percent of the time.

In California, each county jail has its own protocol for treating latent TB infection, but the state’s public health department has encouraged all correctional settings to use the three-month regimen of the two drugs, or a 4-month regimen of daily rifampin.

According to a fact sheet prepared by the department, “short course regimens are preferred whenever possible,” to increase the likelihood that treatment will be completed.

CORRECTION: An earlier version of this story incorrectly stated the research in the jail system was led by Stanford University. As the story now states, it was led by  researchers at Santa Clara Valley Health and Human Services, as well as California Department of Public Health.