Danny Thompson’s kidneys have failed and he needs a transplant but in some ways, he’s lucky: Both of his sons want to give him one of theirs, and his Medicare coverage will take care of most of his expenses.

Yet the 53-year-old Californian is facing another daunting obstacle: He doesn’t have the money for his share of the medical bills and follow-up drugs, and he can’t buy supplemental insurance to help cover his costs.

“It’s frustrating to be in the shape I’m in,” said Thompson, who depends on dialysis instead of his kidneys to cleanse his blood. “My plan is to get a transplant so I can go back to work.”

Almost one in four Medicare beneficiaries has such a policy, known as Medigap, which is sold by private insurance companies. It can help pay for costs Medicare doesn’t cover, including the 20 percent coinsurance required for medical expenses, including certain drugs, plus deductibles and co-payments. Those expenses have no out-of-pocket limit for beneficiaries.

Federal law requires companies to sell Medigap plans to any Medicare beneficiary aged 65 or older within six months of signing up for Part B, which covers doctor visits and other outpatient services. If they sign up during this guaranteed open enrollment, they cannot be charged higher premiums due to their medical conditions.

But Congress left it to states to determine whether Medigap plans are sold to the more than 9 million people younger than 65 years old who qualify for Medicare because of a disability.

In 20 states and the District of Columbia, home to more than 2 million disabled Medicare beneficiaries, insurers are not required to sell Medigap policies to customers under 65. In other states, insurers cannot reject applicants if they enroll when they first join Medicare. Companies in some states, including Virginia, can still charge higher premiums to younger beneficiaries or those with kidney disease, often making policies unaffordable.

In California, Massachusetts and Vermont. insurers are required to sell Medigap policies to anyone with Medicare, except to people like Thompson who are under 65 and have end stage renal disease.

“If it was the reverse — if you were discriminating against somebody because they were 65 or older as opposed to younger — people would be outraged,” said Bonnie Burns, policy specialist for the consumer group California Health Advocates and a member of the National Association of Insurance Commissioners’ Medigap committee.

The federal health law provides no relief for these younger Medicare beneficiaries. One of its most popular provisions prohibits discrimination by insurance companies in the non-Medicare market based on pre-existing conditions or age, but the law is silent on Medigap.

Thompson, who lives in Menlo Park, near San Francisco, said 12 Medigap insurers have turned him down. Buying a health plan through Covered California, the state’s health insurance exchange, is not an option since he has primary insurance through Medicare. “That is for people who don’t have insurance, and I have insurance,” he said. “But it is as if I don’t.”

The transplant costs are substantial, and Thompson said he does not have the resources to cover his share. Kidney transplant patients can expect the preparation, surgery, tests and treatment for the first year to run more than $262,000, according to the American Kidney Fund. The immunosuppressant drugs, which patients will need for the rest of lives to ensure their body does not reject the new kidney, cost another $2,000 to $4,000 a month.

Hospitals and doctors are not required to provide care for Medicare patients unless it’s a medical emergency, a Medicare official said.

Joe Baker, president of the Medicare Rights Center, said that they can turn away Medicare patients for any number of reasons, including inability to pay their share of the bills or because providers are not taking new patients.

“Medicare beneficiaries under 65 with end stage renal disease get an organ transplant if they agree to pay their share of the costs Medicare doesn’t cover,” said Lisa Kim, a spokeswoman for Stanford Hospital, where Thompson has sought treatment.

To help Thompson find financial assistance, a Stanford social worker referred him to Christina Dimas-Kahn, who heads the San Mateo County office of the California Department of Aging’s Health Insurance Counseling and Advocacy Program (HICAP). She said he is one of several clients with end stage renal disease that HICAP counselors have tried to help in the past few years, “But people with the disease don’t have whole lot of options if they are under 65,” she said. 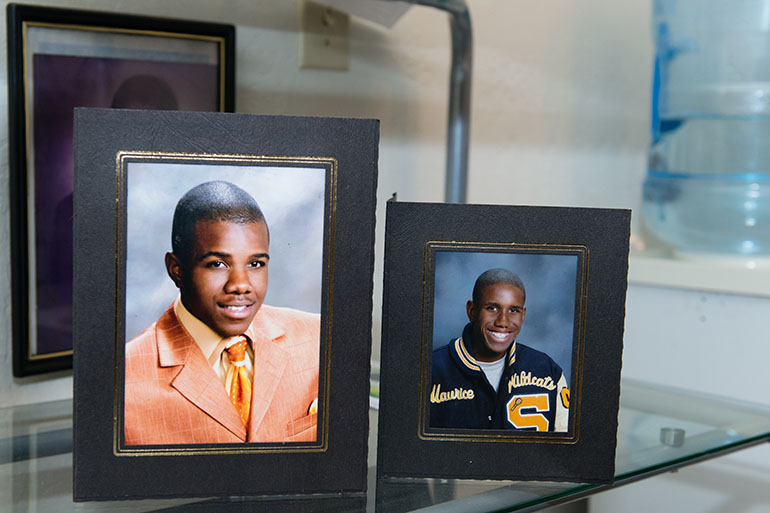 Thompson needs a kidney transplant and both of his sons want to give him one of theirs. (Heidi de Marco/KHN)

Thompson recently learned that he could qualify for Medi-Cal, California’s Medicaid program for low-income people, which Dimas-Kahn said would cover his transplant expenses. But Thompson said that coverage would kick in only after he paid a $2,500 deductible every month, which he cannot afford.

If Thompson divorced his wife of 30 years, her income wouldn’t be counted along with his Social Security disability benefits and it’s possible he wouldn’t have to pay the deductible. That’s not a good alternative, he said. “We made vows — rich or poor, in sickness or in health — you stay married.”

Another solution could be moving to another state, such as Delaware. That’s where Heather Block, a politically savvy project manager for federal and international organizations, took on her state legislature after she was diagnosed with advanced breast cancer.

“I considered myself lucky when I became eligible for Medicare but that 20 percent co-pay with no out-of-pocket maximum is exorbitant for anyone let alone someone with a serious illness,” she said.

Block could get Medicare before turning 65 because she qualified for disability benefits, but she couldn’t get Medigap coverage. Two years ago, she spearheaded a successful campaign to change state law, forcing insurers to sell Medigap policies to anyone when they first enroll in Medicare regardless of age, without basing rates on their health conditions.

“It is insane that we have to go through this crazy patchwork of state regulations,” said Block, whose monthly charges for cancer drugs alone range as high as $9,800. Without Medigap, medical bills would eventually deplete her savings.

Prospects for a nationwide solution are dim because expanding Medigap coverage could lead to these beneficiaries with disabilities receiving more care and raising costs for the Medicare program. Congress is looking for strategies to curb Medicare spending, not increase it, Burns said.

The health insurance industry’s trade association opposes expanding Medigap to include all Medicare beneficiaries younger than 65 with end stage renal kidney disease. Since treatment for those patients can be so expensive, adding them could increase Medigap premiums for everyone, said Cindy Goff, a vice president at America’s Health Insurance Plans. She pointed to Medicare statistics that show when the program covers patients over 65 with end-stage renal disease, their care averages nearly nine times more than other Medicare beneficiaries.

Older adults are “super price-sensitive” and raising premiums “would basically price them out of being able to get the Medigap protection they want,” said Goff.

“The insurance company knows that these patients coming through the door are going to use services,” said LaVarne Burton, president of the American Kidney Fund. “In most instances, if they don’t get treatment, they will die.”

Buying Supplemental Insurance Can Be Hard For Younger Medicare Beneficiaries