Ten years ago, a driver ran a stop sign as Jim McIlroy rode into the intersection on his motorcycle. Serious injuries left McIlroy paralyzed from the chest down. But, after spending some time in a nursing home, he returned to his home near Bethel, Maine.

McIlroy does most of his own cooking since Maine’s Medicaid program paid for a stovetop that he can roll his wheelchair underneath to reach the food-prep area. His new kitchen sink has the same feature. Wheelchair-friendly wood flooring has replaced McIlroy’s wall-to-wall carpeting.

The alterations plus a personal care aide — all paid for by Medicaid  — enable McIlroy to stay in his house that he and his wife, who has since died, “worked really hard to own,” he said. The arrangement also saves Medicaid roughly two-thirds of what it would cost if he lived in a nursing home. 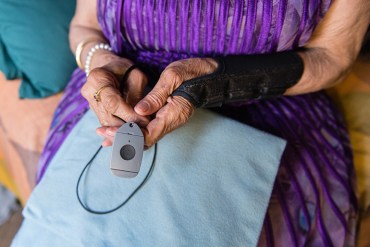 Esther Ellis holds an emergency call button she wears as a pendant around her neck provided by Partners in Care, a Medicaid-funded home-care service that helps her live at home and avoid nursing home care. “If it wasn’t for them, I don’t know what I would do,” she says. (Heidi de Marco/KHN)

McIlroy depends on the federal-state program’s growing support of home-based care services — along with 2 million elderly or disabled Americans who rely on them to live at home for as long as possible. However, that crucial help could face severe cuts if congressional Republicans eventually succeed in their push to sharply reduce federal Medicaid funds to states.

States can choose whether to offer Medicaid services at home, but nursing home coverage, which is more expensive, is a required benefit. Optional benefits like home services would likely be first to go if states face budget troubles, the Center on Budget and Policy Priorities (CBPP) warned in an analysis in May.

“That’s why I am deeply concerned with proposals that would significantly cut Medicaid, forcing governors and state legislators to confront difficult budget choices, including how to maintain these critical, but optional, services,” said Collins, one of three Republicans whose votes early Friday helped defeat the Senate’s “skinny repeal” measure that would have scuttled the Affordable Care Act. 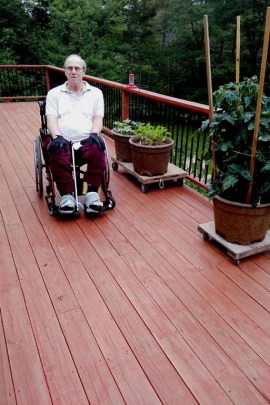 Jim McIlroy, 73, grows cucumbers, peppers and tomatoes on the deck of his house. Ten years ago, a driver hit him as he rode his motorcycle, leaving McIlroy paralyzed from the chest down. (Courtesy of Judy Gould)

While home services are not a required part of Medicaid, they represent a large share of Medicaid spending. Medicaid expenses for long-term care consumed a third of the Medicaid budget nationwide in 2015, and more than half of that amount went to optional home-based care, according to a government report. Nursing homes got the rest.

“Staying at home is so incredibly important,” said McIlroy, 73, who grows cucumbers, peppers and tomatoes on the deck of his house. “You can do what you want to do when you want to do it, and you don’t have to share a room with somebody else and have your meals brought to you.”

Yet demand for home-based services is outpacing supply. In Maryland, more than 20,000 people were on a registry awaiting openings for Medicaid home-based services last month. About 160,000 older or disabled people across the country were waiting for home services in 2015, according to a Kaiser Family Foundation report last year. (Kaiser Health News is an editorially independent program of the foundation.)

Esther Ellis, who lives outside Los Angeles, received a new mattress this year from Partners in Care, a nonprofit that runs four of the 38 sites in California’s Multipurpose Senior Service Program and provides Medicaid-funded home services.

The mattress helps relieve her back problems after surgery. Partners also provided a couch, a microwave and an emergency call button to summon help that she wears as a pendant around her neck.

Advocates argue that home-based services can make a big difference for health. “It’s all well and good to discharge people from the hospital with a list of medications to take,” said Camille Dobson, deputy executive director of the National Association of States United for Aging and Disabilities, which represents state departments of aging. “But if they go home to a refrigerator that doesn’t work so that they can’t store their medications or have no way to get to their appointments, all of that great medical intervention goes for naught.”

Medicaid home services usually include a visiting nurse or nurse practitioner, a home health aide or someone to help with dressing, eating and other daily activities, light housekeeping and transportation to doctor’s appointments. But that’s just the beginning.

The programs also pay for home modifications, which include minor renovations such as grab bars in the bathroom to prevent falls and wider door frames to accommodate wheelchairs. To overcome potentially treacherous stairs, states may provide wheelchair ramps and some — including California and Ohio — will install a stair glider or chairlift.

Carolyn Gilliland, 81, has lived in her home in central Ohio’s farm country since she was 4. She receives home-based services to help with chronic health problems through a Medicaid managed-care plan called MyCare Ohio. It provides two weekly visits from a nurse, a personal care aide and a chairlift to reach her second-floor bedroom. Until it was installed in April, she couldn’t go upstairs.

“It relieves the stress on my knees,” she said.

Home health services, plus any appliances, electronics and other items, must be medically necessary and part of an individual care plan. Recipients must receive Medicaid, and in most cases must be sick enough to qualify for nursing home care.

Among them is Cynthia Dutil, 60, who lives near Waterville, Maine. Because she has cerebral palsy, she depends on a personal care aide for help with dressing and other daily activities. Maine’s home-based services program also provided a small food processor to puree her foods, a large-print keyboard for her computer and a two-sided toothbrush.

Dutil said she’s living life on her terms. She began to explain why she prefers that to living in a nursing home, but stopped midsentence. “How much time do you have?”

For more information about Medicaid home-based services, go to www.eldercare.gov or call 1-800-677-1116.

Counting On Medicaid To Avoid Life In A Nursing Home? That’s Now Up To Congress.