FRESNO, Calif. — In 2012, when Jerry Goodwin showed up at a clinic with intense pain and swelling in his legs, doctors called for an ambulance even though the hospital was across the street. That generated a $900 bill — just the beginning of a nearly three-year ordeal for Goodwin, who was uninsured.

Diagnosed with cellulitis and an irregular heartbeat, Goodwin managed to get his emergency care costs covered through the hospital but then faced month after month of bills for follow-up care and medications.

Finally, in 2015, he was able to sign up for Medicaid coverage, which was expanded under the Affordable Care Act to cover many single adults without children. “That was a big relief,” said Goodwin, 64.

Now Goodwin and people like him are worried all over again.

Under Republican efforts to repeal, replace or reform the health law, many people on Medicaid — the nation’s single-largest insurer, with 72 million beneficiaries — could see their coverage slashed. The biggest chunk of them — 13.5 million — live in California. The state predicted Wednesday it could lose $24 billion in federal funding annually by 2027 under the current GOP proposal.

Among the hardest hit regions would be the Central Valley, the state’s agricultural heartland, stretching hundreds of miles from Redding to Bakersfield. Toward the south, in Fresno County, about half the population of 985,000 relies on Medi-Cal, as California’s Medicaid program is known. In adjacent Tulare County, 55 percent of the more than 466,000 residents were enrolled in Medi-Cal as of January 2016.

Much has been said about the plight of conservative voters in the Midwest who rely on Medicaid, a program the Trump administration and congressional Republicans are determined to shrink. But despite its reputation as a deep-blue state, California also has several red — or reddish — counties in its interior with millions of low-income people who depend heavily on Medicaid. Many live in congressional districts represented by Republicans who want to scrap or change the Affordable Care Act, also known as Obamacare. 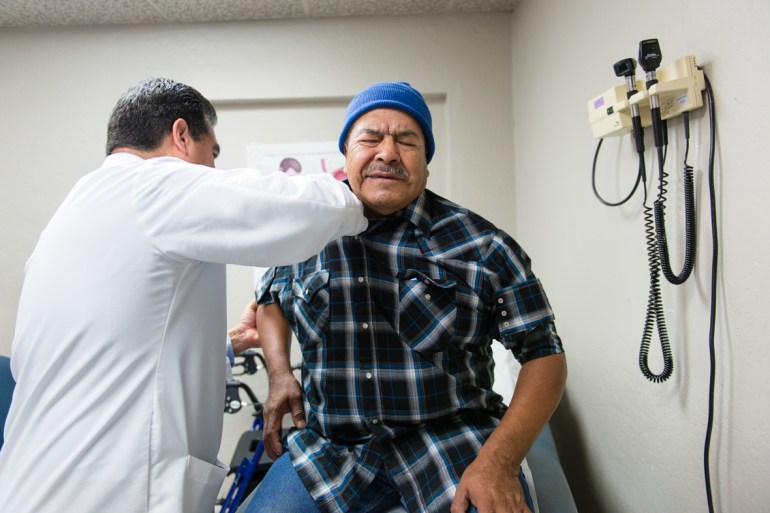 The current Republican bill, the American Health Care Act, would cut Medicaid funding by 25 percent by 2026, covering 24 million fewer people than today, according to the Congressional Budget Office.

“These are remarkable estimates,” said John Capitman, the executive director at the Central Valley Health Policy Institute and a professor at California State University, Fresno. “The level of cuts are devastating, and for California and the Central Valley, this represents a huge loss.”

The bill faces opposition from the left and right and is undergoing last-minute changes in the run-up to a House floor vote Thursday. Despite several protests in the valley and around the state, more than half of Republican House members in the state appear poised to support it; several others are noncommittal.

U.S. Rep. Devin Nunes, whose congressional district includes portions of Tulare and Fresno counties, likes the proposal, saying it will improve care for everyone, including current Medi-Cal participants.

“Medi-Cal is a broken healthcare system that’s been completely mismanaged by the State of California,” Nunes said in a recent statement.

Capitman said Medi-Cal is vital in the Central Valley because of its high poverty rate, uneven access to care and pockets with very poor health outcomes. Many of these communities also depend on the Prevention and Public Health Fund, which was established by the ACA to fight chronic diseases and also is in peril, he said.

The valley suffers high rates of diabetes, obesity and heart disease. The area has some of the country’s dirtiest air, triggering epidemic levels of asthma. Wage stagnation and high unemployment contribute to stress and poor mental health.

Some areas are far better off than others. Within 10 miles, Capitman said, you can find up to a 20-year difference in life expectancy. On average, life is much shorter for residents in Southwest Fresno, for instance, where heavy industry soils the air, homeless people camp on sidewalks, and fences cage in lots overgrown with grass and weeds.

Not far away, Petra Martinez, a former fieldworker, recently waited to see a doctor at a crowded downtown clinic. At 86, she receives coverage from both Medi-Cal and Medicare, the federal insurance program for the elderly. She needs medication for arthritis, epilepsy and diabetes, all of which is paid for her through her dual coverage.

Though the proposed House bill seemingly would not shrink spending on people with dual coverage, she is wary of what lies down the road.

“I’d like to think that we [seniors] will be OK, that maybe we won’t be affected by whatever changes are coming, but who knows?” Martinez said. “I don’t want to have to ask my children for money to go to the doctor.”

Dr. J. Luis Bautista, an internist at the clinic, estimates he’s seen a 20 percent increase in patient visits since the rollout of the ACA in 2014. The majority of his patients are on Medi-Cal.

“These are the people who usually wait until they’re very sick to come,” Bautista said. “We’ve seen people with high blood pressure who come in when they already have eye problems and heart problems. … They waited too long.”

But since the ACA rolled out, he said, preventive visits seem to have increased. 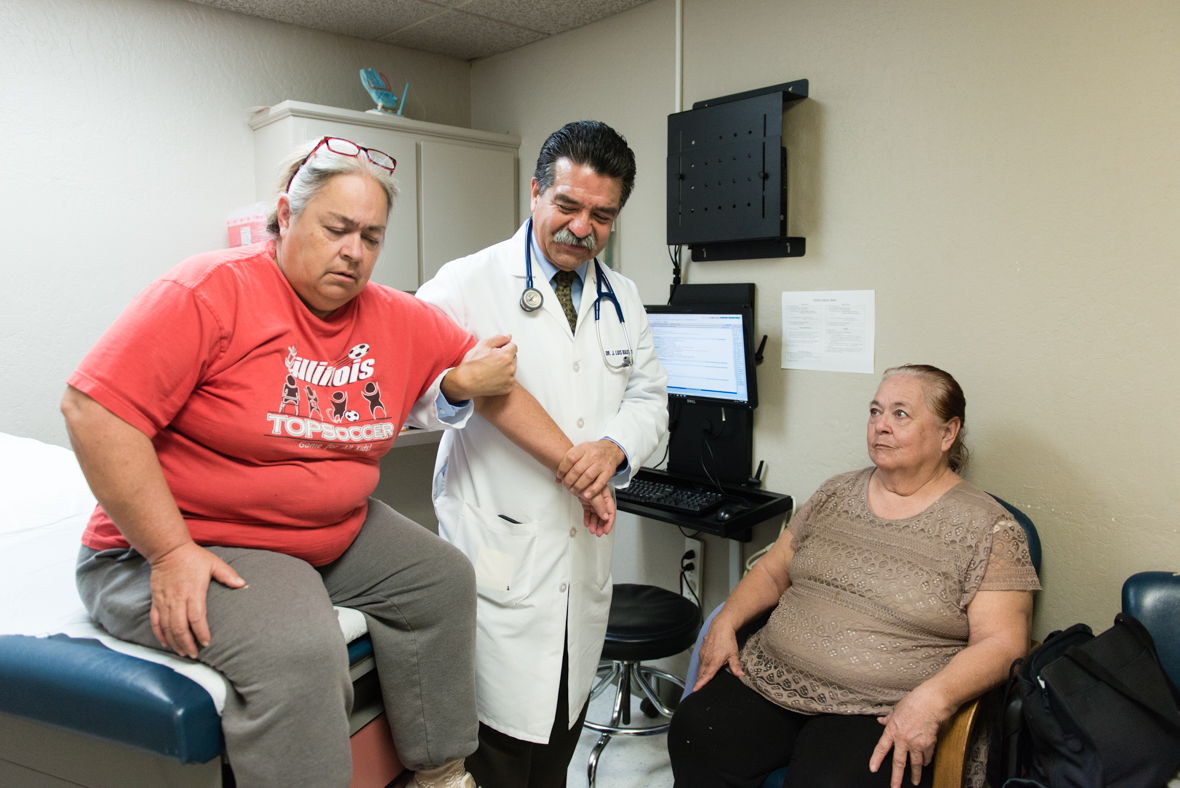 Luis Bautista, an internist at Bautista Medical Center in Fresno, examines Kathy Macias, 53, while her mother, Connie Hernandez, 72, waits to be seen last month. Bautista says the majority of his patients are afraid of losing the health insurance they received under the Affordable Care Act. (Heidi de Marco/California Healthline)

Fifteen miles outside the city of Fresno is Sanger, a largely Latino town of 25,000 where almost a quarter of residents live in poverty, according to the U.S. Census.

Here a neighborhood of newer houses with commuter residents isn’t far from another that lacks sidewalks and is strewn with aging or abandoned businesses and chain stores.

On a recent day, a hairstylist was tending to a client in a downtown salon nestled among boutiques, cafes and other small businesses. The stylist said she and her two teenagers are on Medi-Cal — and so are most of the people she knows. A single mother, she said she works six days a week but can’t afford to buy health coverage.

The salon’s owner interjected that she doesn’t oppose greater restrictions on who gets Medi-Cal — but plans on the state’s insurance exchange should be more affordable, so people will be drawn to buying coverage.

The women asked that they and the business not be identified.

Less than an hour southeast of Fresno, Iliana Troncoza lives in the city of Tulare, part of a heavily agricultural county of the same name. The county has one of the lowest incomes per capita in California.

Troncoza, a 47-year-old homemaker who takes care of her ailing husband, gets her health care at Altura Centers for Health, which runs seven clinics in the city. The thought of Medi-Cal cutbacks fills her with anxiety. Both she and her daughter, a college freshman, rely on the program for coverage. 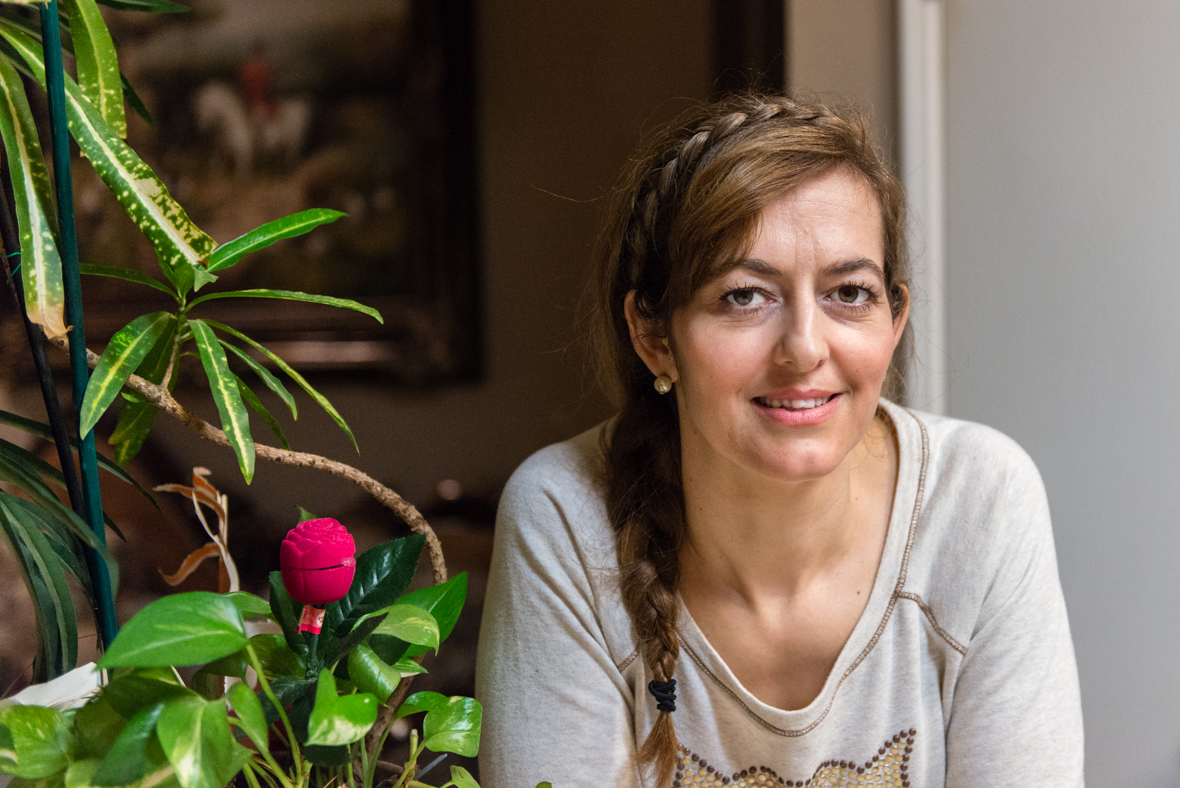 Iliana Troncoza, 47, of Tulare, said she had gone without health coverage for six years before qualifying for Medi-Cal under the expansion. Troncoza said that since qualifying for Medi-Cal, she has gone in for mammograms, ultrasounds and has been able to obtain medication for her depression and anxiety. “It’s horrible to think that our Medi-Cal depends on people who don’t understand our situation,” Troncoza said. (Heidi de Marco/California Healthline)

Troncoza had gone without coverage for six years before qualifying under the ACA expansion. She traveled to Jalisco, Mexico, to remove a breast cyst because couldn’t afford the procedure in the U.S. Now, in her city, she can receive mammograms and ultrasounds, and has been able to obtain medication for her depression and anxiety, she said.

“It’s horrible to think that our Medi-Cal depends on people who don’t understand our situation,” Troncoza said.

“The Medicaid expansion was wonderful for our patients,” Soto said.

Through the ACA, Soto said, many young women were able to access free or affordable birth control. That’s important, she said, because Tulare County has among the highest teen pregnancy rates in the state.

The region has a large population of migrant farm workers, many of whom don’t qualify for Medi-Cal. But a substantial portion of Latinos do qualify, as do non-Hispanic whites like Goodwin.

Among whites, the need for mental health and substance abuse services is growing, research suggests. Drug overdoses, alcohol abuse and suicide have significantly contributed to rising death rates, according to a study out of the Center on Society and Health at Virginia Commonwealth University. 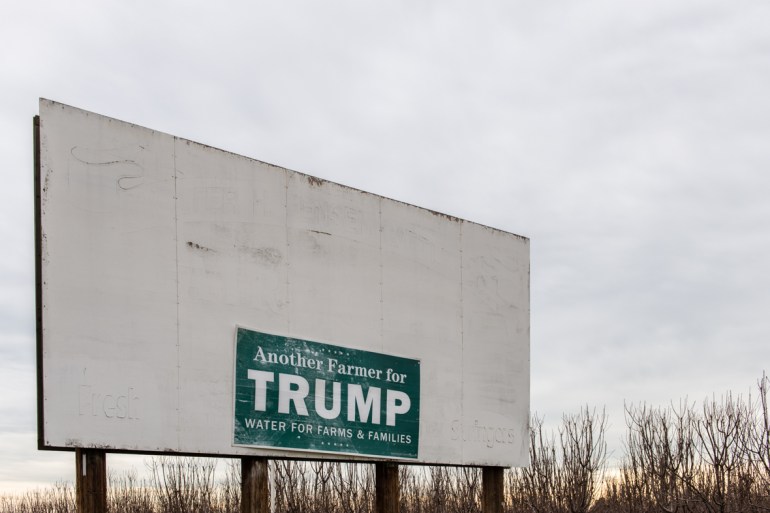 A Farmers for Trump sign is posted on a billboard in Tulare County. These rural areas are largely represented by Republicans in Congress who want to repeal the law, even though 55 percent of the more than 466,000 residents in Tulare were enrolled in Medi-Cal as of January 2016. (Heidi de Marco/California Healthline) 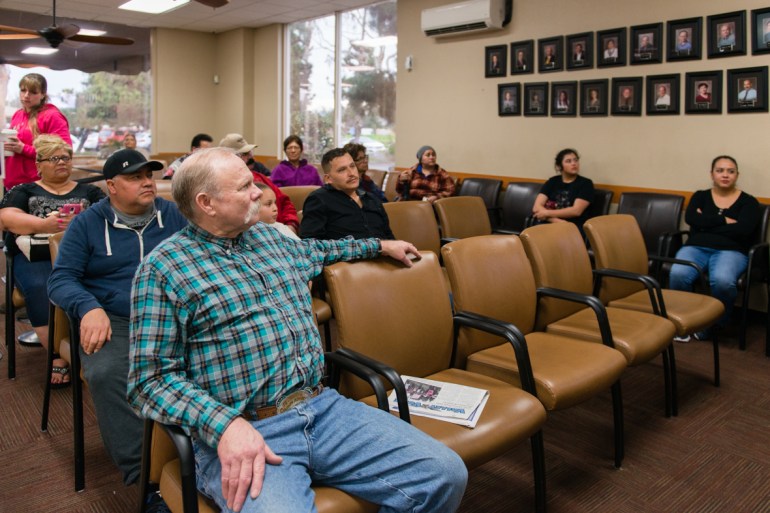 In Fresno County, for example, the rate at which middle-aged white adults are dying from accidental drug poisoning has tripled since 1990, according to the report.

Some residents have turned to activism in their efforts to preserve ACA coverage. In January, Greg Gomez, a councilman for the city of Farmersville in Tulare County, led a small-scale protest outside Nunes’ office in Visalia.

It wasn’t just about politics — it was personal. Three of Gomez’s children are covered by Medi-Cal.

“The monthly premium to get my whole family covered by my employer would be about $2,000,” said Gomez, a computer systems engineer for Tulare County and former president for the local chapter of the Service Employees International Union. “That is totally out of reach. That’s why we need Medi-Cal. And that’s the story of a lot of Tulare residents.”

CORRECTION: An earlier version of this story said incorrectly that California estimated it would lose $24 million in annual federal funding by 2027. The correct figure is $24 billion. The story has been updated.

In Deep-Blue State, Millions in Reddish Heartland Are Counting On Medicaid