“This bill is not a health care bill,” said Ed Hernandez, a Democrat and chair of the state Senate Health Committee. “This is a tax bill that will benefit the most wealthy individuals at the expense of those who need health care the most — the working poor and seniors.”

Democratic Gov. Jerry Brown said in a tweet that the bill had the same “stench” as the bill that passed the House last month. “Millions will lose health care coverage, while millionaires profit,” he wrote. “The American people deserve better.”

The 142-page Senate bill, released Thursday morning, would overhaul the Affordable Care Act and repeal the taxes that pay for many of the law’s benefits. The proposed legislation also would significantly reduce funding for Medicaid, the program for people with low incomes, and phase out the ACA’s massive expansion of it.

It would limit eligibility for tax subsidies to purchase insurance in the state and federal exchanges and allow insurers to charge elderly people up to five times more than younger consumers, compared with three times under the ACA.

The Senate bill is substantially similar to the one passed by the House last month, but it differs in some key respects. The Senate measure proposes a slower timeline for the phaseout of the Medicaid expansion and it completely eliminates the requirement that individuals be insured rather than just charging consumers for lapses in coverage, as the House bill does. It would also cut federal spending on Medicaid more deeply than the House bill over the long term.

The two bills also handle premium subsidies differently: The House version would base them solely on age while the Senate proposal factors in age, income and geography.

About one-third of California’s residents — 13.5 million people — are on Medicaid, known as Medi-Cal in the state. About 3.8 million of them have gained coverage since the Affordable Care Act, also known as Obamacare, took effect in 2014. Another 1.3 million have health coverage through Covered California, the insurance marketplace. 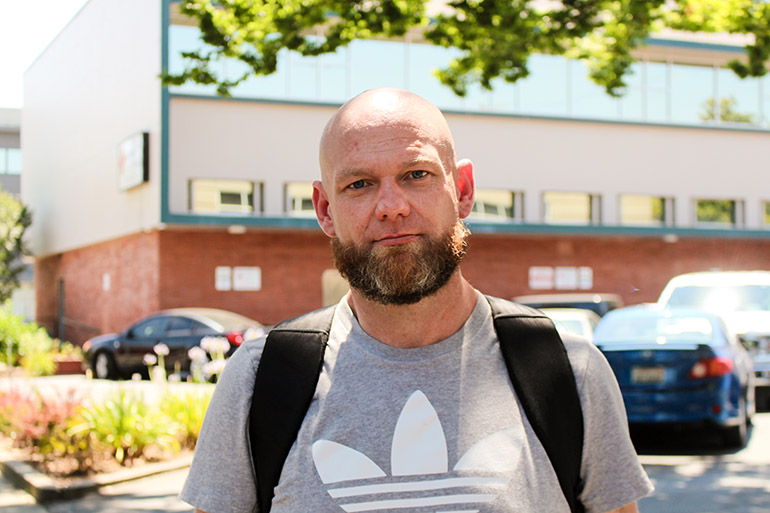 Cory Dobbs stands in front of the Cares Community Health clinic in Sacramento. He has HIV and cancer. “For some of us it’s life or death,” he said. (Kellen Browning/California Healthline)

Under the Senate bill, insurance companies would have to accept all people regardless of their preexisting conditions. However, the measure would allow states to do away with the minimum “essential benefits” that are required under Obamacare, such as hospital visits and mental health benefits. Some health experts believe insurers could use that as a back door for excluding people with histories of illness, simply by selling policies that don’t include coverage they need.

That worries people like Cory Dobbs, a checker at a Grocery Outlet supermarket, who has HIV and cancer.

“For some of us it’s life or death,” said Dobbs, 42, a Medi-Cal patient who goes to Cares Community Health clinic in Sacramento. “Some of us really will possibly pass because of this bill. It’s just the truth.”

Critics of the Affordable Care Act argue that the federal government needs to rein in costs and that states should take more responsibility for providing health care. For example, states could divert funding from other parts of their budgets if they wanted to continue with the Medicaid expansion, said Lanhee Chen, a health policy expert at the Hoover Institution.

“I tend to push back on the notion that the alternative of Obamacare will result in people dropping coverage,” he said of the Republican push to repeal the law. “This is not just a question of what the federal government does with Medicaid financing, but what the state can do if the financing changes become law.”

But Sarah de Guia, executive director of the advocacy group California Pan-Ethnic Health Network, said the Golden State has set the bar high in terms of providing coverage under the ACA and that the Republicans’ efforts threaten that coverage.

“California is obviously a leader,” she said. “But with the potential cuts … it is inevitable that the state would have to make some really tough decisions.”

In the Medi-Cal program, that could mean cutting benefits, shrinking eligibility or reducing reimbursements for providers, which are already among the lowest in the nation. That has caused anxiety among staff at community clinics, safety-net hospitals and nursing homes.

“Community clinics will continue and they will try to stay open, but it is like pulling the rug out from under us,” said Deena Lahn, vice president of policy and advocacy for the San Francisco Community Clinic Consortium. “Medicaid is now the financial underpinning for our work.”

Dr. Jay Lee, chief medical officer of the Los Angeles-based Venice Family Clinic, spent Thursday at a “white coat” rally of physicians in Washington, D.C., in opposition to the GOP’s efforts to “repeal and replace” Obamacare.

The Senate bill “basically guts Medicaid” and makes it harder for physicians to do their jobs, Lee said. “I might as well write my [prescription] scripts in invisible ink if patients can’t pay for the medications.”

In the individual insurance market, tens of thousands of people who receive federal subsidies would no longer qualify for the help because of a provision in the Senate bill that reduces the income thresholds for eligibility.

Officials with Covered California, the state’s marketplace, said the bill could have a wide-ranging impact on enrollees. “At first blush, it would not only provide far skimpier health coverage than what’s offered today, but millions of people would have no coverage at all,” the exchange’s executive director, Peter V. Lee, said in a written statement.

Some consumers support a rollback of the ACA. Sarah Foster, 83, opposes both the Senate and House health proposals, but for a different reason: She does not think either goes far enough toward a full repeal of Obamacare.

Foster, a Sacramento resident who is on Medicare and Medi-Cal, said she never had trouble finding a doctor before the ACA. She said that, after it passed, it seemed many physicians went into specialized care because of the “red tape” associated with the law.

Now, she said, she lacks a primary care physician. “So now I’m running around trying to find an internal [medicine] person.”

Safety-net hospitals, which also have benefited under the ACA, fear the impact of a Republican overhaul. California’s public hospitals could be out more than $2 billion a year if the Medicaid expansion is repealed, according to the California Association of Public Hospitals and Health Systems.

The bill is a “futile effort to save money,” the group’s president and CEO, Erica Murray, said in a statement. “Simply refusing to spend money on health care does not reduce the cost of it, or the need.”

Dr. Matthew Hickey, 30, a University of California-San Francisco medical resident who works at San Francisco General Hospital, that city’s safety-net hospital, said he was concerned the bill is going to “dramatically reduce both coverage and the quality of coverage.”

He added: “The Medicaid cuts in particular are quite concerning. Many of the patients I take care of and who got care through the Medicaid expansion won’t be able to see me.”

Lots Of Boos In California For Senate Health Bill