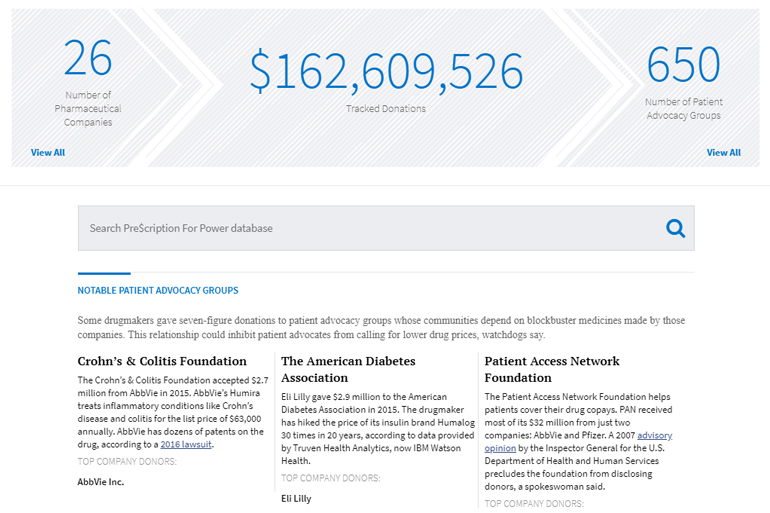 Investigating the relationships between patient advocacy groups and Big Pharma

Pfizer will pay the government nearly $24 million as part of a settlement to resolve allegations that it funneled money through a foundation resulting in illegal kickbacks.

The company is not admitting wrongdoing or liability as part of its agreement with the Department of Justice.

According to the settlement, from 2012 through 2016, Pfizer made donations to the Patient Access Network (PAN) Foundation, a copay assistance nonprofit organization, and then used a specialty pharmacy to steer Medicare patients taking its drugs toward the foundation to cover their copays.

“Pfizer knew that the third-party foundation was using Pfizer’s money to cover the copays of patients taking Pfizer drugs, thus generating more revenue for Pfizer and masking the effect of Pfizer’s price increases,” said U.S. Attorney Andrew Lelling, citing the settlement. “The Anti-Kickback Statute exists to protect Medicare, and the taxpayers who fund it, from schemes like these.”

Drugmakers can’t directly offer copay assistance to Medicare or Medicaid beneficiaries under federal law. The concern is that covering such out-of-pocket costs for expensive drugs still leaves taxpayers with the bill for the remainder of the costs. Congress didn’t want beneficiaries to be shielded from price increases, allowing drugmakers to increase prices without risking that patients will switch to cheaper alternatives.

“The Company believes all individuals deserve access to medicines prescribed by their physicians,” she said in a statement provided to Kaiser Health News. “Pfizer continues to believe these programs help patients lead healthier lives.”

Joel Hay, a health policy and economics professor at the University of Southern California, disagrees. “In essence, [copay programs give] the drug companies free rein to jack the price up to whatever they want,” he said. “You totally dilute any effort on the part of the doctor or consumer to think carefully about whether these drugs are worth their cost.”

Pfizer gave the PAN Foundation $16.9 million in 2015, according to Kaiser Health News’ Pre$cription for Power database, which covers contributions from drugmakers to patient groups in 2015 but will expand over time. Asked why the settlement was only $7 million more than what Pfizer gave the PAN Foundation in 2015, the Department of Justice said its policy was not to comment on settlement amounts.

Tikosyn, a Pfizer drug to treat an irregular heartbeat, was also part of the alleged scheme, according to the settlement. The drugmaker raised the list price of 40 Tikosyn capsules from $220 to $317 in the final three months of 2015. It cost Medicare $107 million in 2016 before rebates.

Planning a price increase, Pfizer worked with the PAN Foundation to “create and finance a fund” for Medicare patients with a specific irregular heartbeat, the settlement says. “For the next nine months, Tikosyn patients accounted for virtually all of the beneficiaries of PAN’s fund.”

Hay said the DOJ action is “long overdue.” Pfizer is one of many drug companies engaging in such behavior with various copay assistance nonprofits, he said, and the DOJ should have been aggressive about it “years if not decades earlier.”

“The basic fact is it’s illegal under the False Claims Act,” he said.

“While PAN has received contributions from Pfizer, we endeavor to operate our patient assistance programs independent of any influence by donors,” he said. “Without the assistance PAN provides, many thousands of underinsured patients would be unable to afford their critical medications.”