For years, leading health experts have said the way to improve healthcare quality and lower its cost is to emphasize prevention over treatment and encourage closer coordination among medical providers caring for a patient.

Those goals are at the core of the Affordable Care Act, which aims to push medical delivery in that direction.

But there’s a counter trend threatening to undermine that vision, according to an article published March 9 in the New England Journal of Medicine: A rapid move toward health plans that impose a larger share of the cost on enrollees, most notably through high deductibles and copayments.

“The conflict between these two approaches is clear,” wrote the article’s co-authors, Peter Lee, the executive director of Covered California, and Dr. Elliott Fisher, director of the Dartmouth Institute for Health Policy and Clinical Practice. Boosting quality and cutting costs, they said, “depends directly on having patients engaged with their care team — usually a primary care practice.”

The two authors still see an important role for “carefully designed” consumer cost sharing, which can induce patients to “make wise decisions about what discretionary care they truly need and want.”

But the high out-of-pocket costs embedded in a growing number of health plans can deter people from getting the preventive primary care they need to stay healthy, Lee and Fisher warned. They urged state-based insurance exchanges and employers who sponsor coverage for their workers to offer health plans that make it easier for people to get medical care. 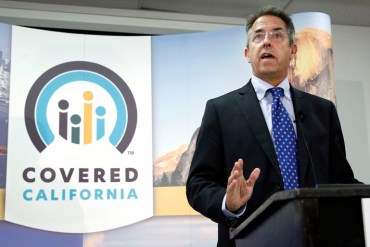 “We need to change the culture of medicine to be about primary care and care coordination,” Lee said in an interview last week. “Employers and health plans in the public sector have benefit designs that directly conflict with the goal of the ACA.”

So much of the health reform law, Lee added, is about ensuring access to care. Yet, high out-of-pocket costs in many plans can block that objective he said.

That is particularly true among those who get health coverage through an employer. And that’s a large number: 147 million people, or 54.6 percent of the non-elderly U.S. population, according to a 2015 survey on employer-sponsored insurance by the Kaiser Family Foundation and Health Research & Educational Trust. [Kaiser Health News, which publishes California Healthline, is an editorially independent program of the foundation.]

Lee and Fisher noted that the proportion of Americans who have employer-sponsored coverage with deductibles of more than $1,000 has increased from 10 to 46 percent in the past decade.

They cited a 2015 study by the National Bureau of Economic Research showing that plans with high deductibles in a population with relatively high income led to a 10 percent decline in the use of preventive care and an 18 percent drop in physician visits. The biggest reduction in care was among the sickest patients.

“We want consumers to be able to see their doctor when necessary, so their health care needs can be met in the most effective and efficient way possible,” Fisher said in a news release.

Fisher and Lee noted that Covered California has taken a different approach — an example they said can help avoid a collision between insurance plans with high deductibles and the ongoing effort to improve the quality and reduce the cost of care. (By cost, Lee and Fisher mean health care costs overall; with high deductible plans, the cost to employers goes down.)

Among 1.3 million Covered California enrollees as of June 2015, they noted, 75 percent could obtain primary care without being subject to a deductible and with “modest co-payments” that varied depending on whether they qualified for federal subsidies.

Yet the other 25 percent of Covered California enrollees — 316,000 people — had chosen the lowest-tier “bronze” option as of mid-2015. Patients in the bronze plan receive one free primary care visit and three visits not subject to the annual deductible. After that they face a $5,000 deductible for primary care visits and other care.

Erin Trish, an assistant research professor at the University of Southern California’s Leonard D. Schaeffer Center for Health Policy and Economics, said the reason why many people chose bronze is simple: despite the high deductibles, people are pulled toward the cheaper premiums.

“They might be able to get these three primary care visits [not subject to the deductible], but if they need other services, it will be at a considerable cost, and that adds to financial hardship,” Trish said.

It’s not just about the cost. Plans catering to patients’ best interests should be easier to navigate, many agree. Too many plan benefit designs, they say, are confusing and convoluted for the average consumer.

Fisher and Lee noted that Covered California — joined by a handful of other states — has standardized deductibles, copayments and other shared costs for its contracted health plans at each of the four levels of coverage: bronze, silver, gold and platinum. That means shoppers can compare plans at each tier of coverage based only on the premium and which doctors and hospitals are in the network.

Not all state exchanges are designed this way, they observed. Consumers in many states are left to choose among a multitude of insurance policies from a wide range of carriers, with differing deductibles and co-payments. Many of the health plans in this “confusing array of products” will undermine initiatives in delivery-system reform,” the authors wrote.

Two weeks ago, the Centers for Medicare and Medicaid Services announced it would allow health insurance companies to standardize benefit designs on the federal exchange next year.

Shana Alex Charles, an associate professor at California State University, Fullerton’s Department of Health Science, said the fact that the federal government is looking to carry out a benefit design similar to Covered California’s is good news for consumers.

“People don’t always want to have a lot of choices; it is difficult and overwhelming,” Charles said. “They want a good product within a limited range of options.”

She said Covered California’s model is probably the most consumer-friendly currently available. “It’s surprising other states aren’t doing the same,” she added.

According to Lee, more people are paying attention to what California is doing. “We’re raising the warning flags,” the exchange director said. “If we don’t improve the pathway for people to see their primary care doctor, we all lose.”

California exchange officials plan to continue pounding the drum. In April, Covered California’s Board of Directors will consider a new rule that would ensure every single patient covered through the exchange has a doctor within 30 days of signing up.