It’s not the CVS, Rite Aid or Walgreens of home. Die Apotheke, as a pharmacy is known here, sells medications. German drugstores might have some high-end makeup (hypoallergenic, and for sensitive skin!), lotions or baby bottles. You’ll also definitely find magnesium supplements and vitamins.

But they aren’t convenience stores stocking hair dryers, cellphone chargers, toys or groceries. This is the place you go for health, and for medicine.

Germany’s health care system, with its negotiated low drug prices and robust universal insurance program, is hailed as a forward-looking model for the United States, which is hamstrung by ever-growing health care costs and leaves millions of people uninsured. Could we learn something from the pharmacies here, too?

Carrying that question in mind, I wandered into three north Hamburg pharmacies, all within a five- to 15-minute walk.

It turns out this is where the health landscape gets a little fuzzy. The pharmacies here offer a glimpse into how Germany’s drug pricing system, for the most part, keeps drugs relatively affordable for consumers. But while Apothekes present themselves as health-oriented hubs, they, like so much else in health care, are first and foremost businesses. 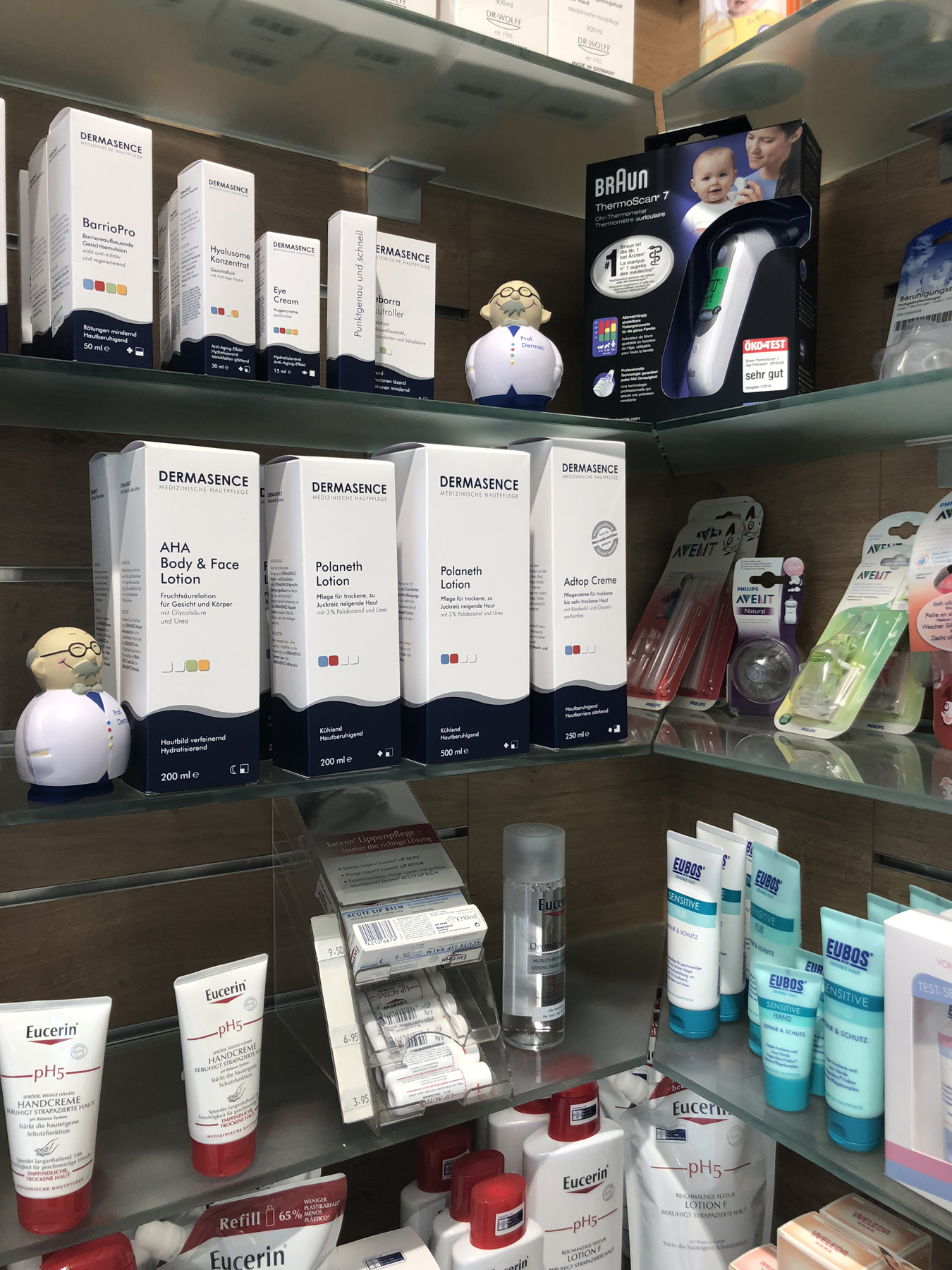 German pharmacies might sell some high-end makeup, lotions or baby bottles, but they aren’t stocked with the wide range of items found in American stores. (Shefali Luthra/KHN) 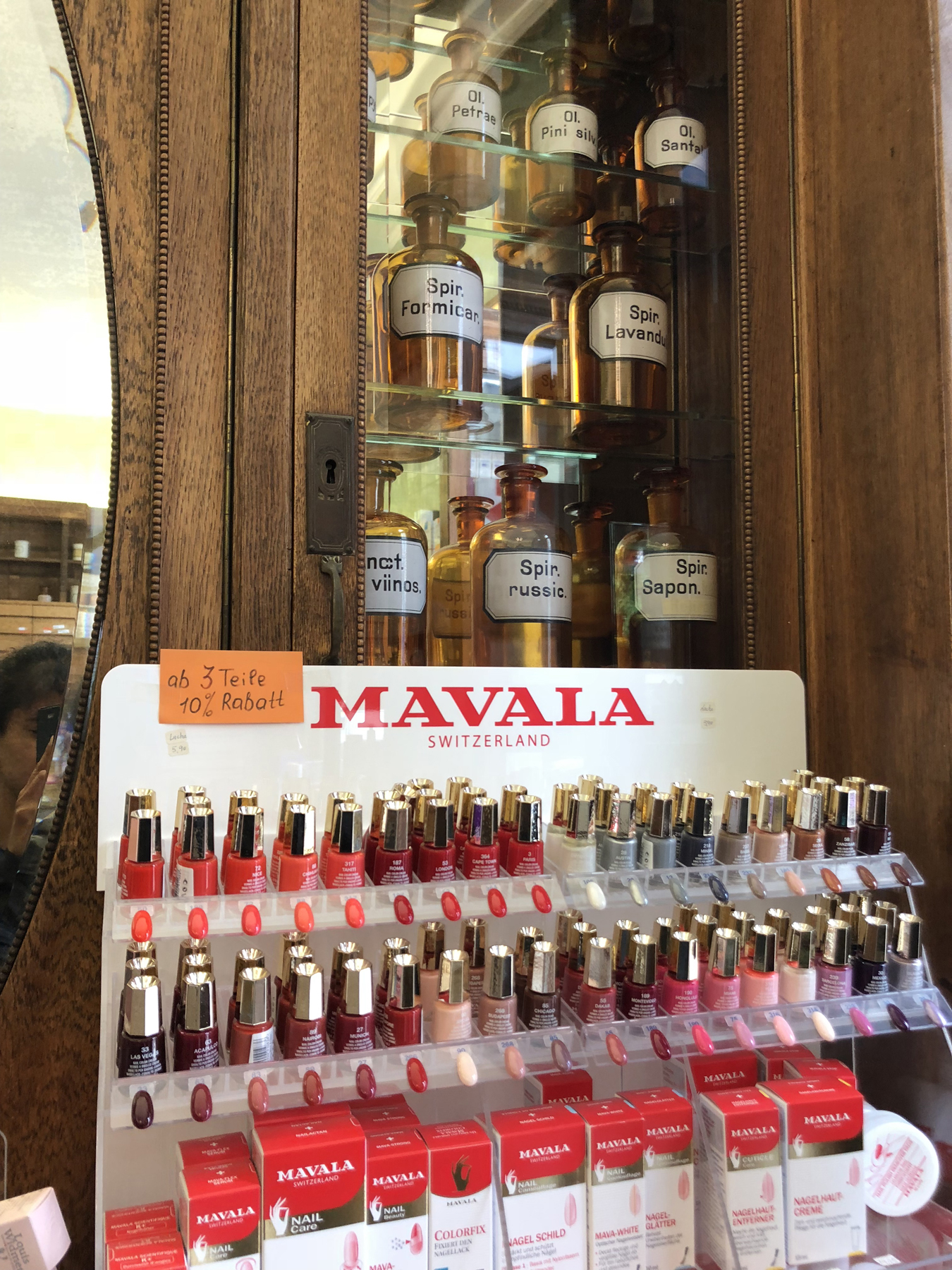 At Lillen Apotheke, in Hamburg’s upscale Eppendorf neighborhood, a pharmacist acknowledged that stores like hers sell skin lotion, high-end nail polish (allegedly better for your fingers) or pharmacy-exclusive mascara (also hypoallergenic) not primarily for health reasons but to make money. (Shefali Luthra/KHN)

Unlike in the United States, or even other European countries, German pharmacies must be owned by pharmacists. Most medications are prescription-based. And every medication someone purchases — even something Americans consider “over-the-counter” like ibuprofen or cold medicine — requires a conversation with the pharmacist first, to make sure patients understand its effects.

Economists here aren’t sure the German way is better.

For starters, there’s no evidence that this specific requirement of a “talk” is somehow more efficient or leads to better health outcomes. While expert opinion is in some cases helpful, it can be superfluous, too. For instance, does someone with menstrual cramps or a muscle sprain need the pharmacist’s advice before getting ibuprofen?

“The benefits are meant to be safety,” said Tom Stargardt, a professor at the University of Hamburg who studies pharmaceutical economics. “The question is, ‘How much do you trust the consumer to be informed, to be able to judge the benefits of the drug?’” 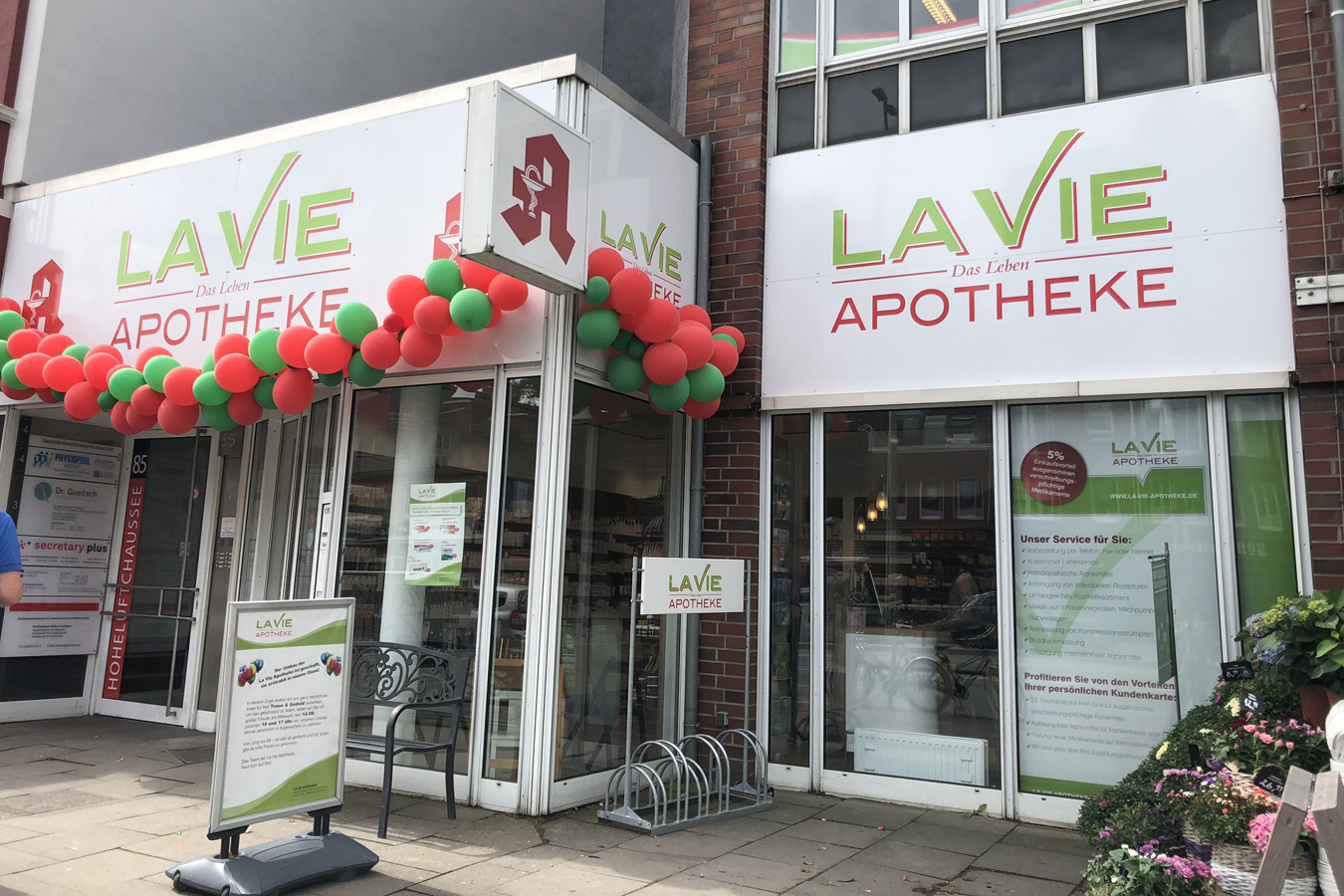 Unlike in the United States or other European countries, German pharmacies must be owned by pharmacists. And every medication someone purchases at a German pharmacy requires a conversation with the pharmacist first, to make sure patients understand its effects. (Shefali Luthra/KHN)

Often, those conversations are quick and cursory. At La Vie Apotheke, on a crisp Friday morning, a pharmacy consultation for aspirin took about half a minute.

German pharmacists have a strict monopoly on dispensing medicine, and that undermines the potential for price competition, economists said.

Also, drugs here have a set price. A government-backed panel defines what public insurance plans will pay. Then, wholesalers can add a markup, defined by statute. Pharmacists can add one more, also legally prescribed. That’s it.

It’s a window into the ethos of the national health care system. “Every prescription drug costs the same in every pharmacy,” Stargardt said. “The reason is that every person should have the same access. Whether they live in a rural area [or a city], they shouldn’t be punished in terms of prices.”

Drugs here already cost less than in the United States. For instance, Humalog, a brand of insulin, lists a $55 price per vial, compared with an average of hundreds of dollars back home.

And German patients typically don’t even see that expense. If a doctor prescribed the drug, insurance typically must cover it, meaning patients pay virtually nothing. (When a cheaper generic is available here, pharmacists are legally required to provide that version, unless the physician explicitly says otherwise.) For insured Germans with chronic illnesses, the state caps health cost sharing at 2% of their household income. 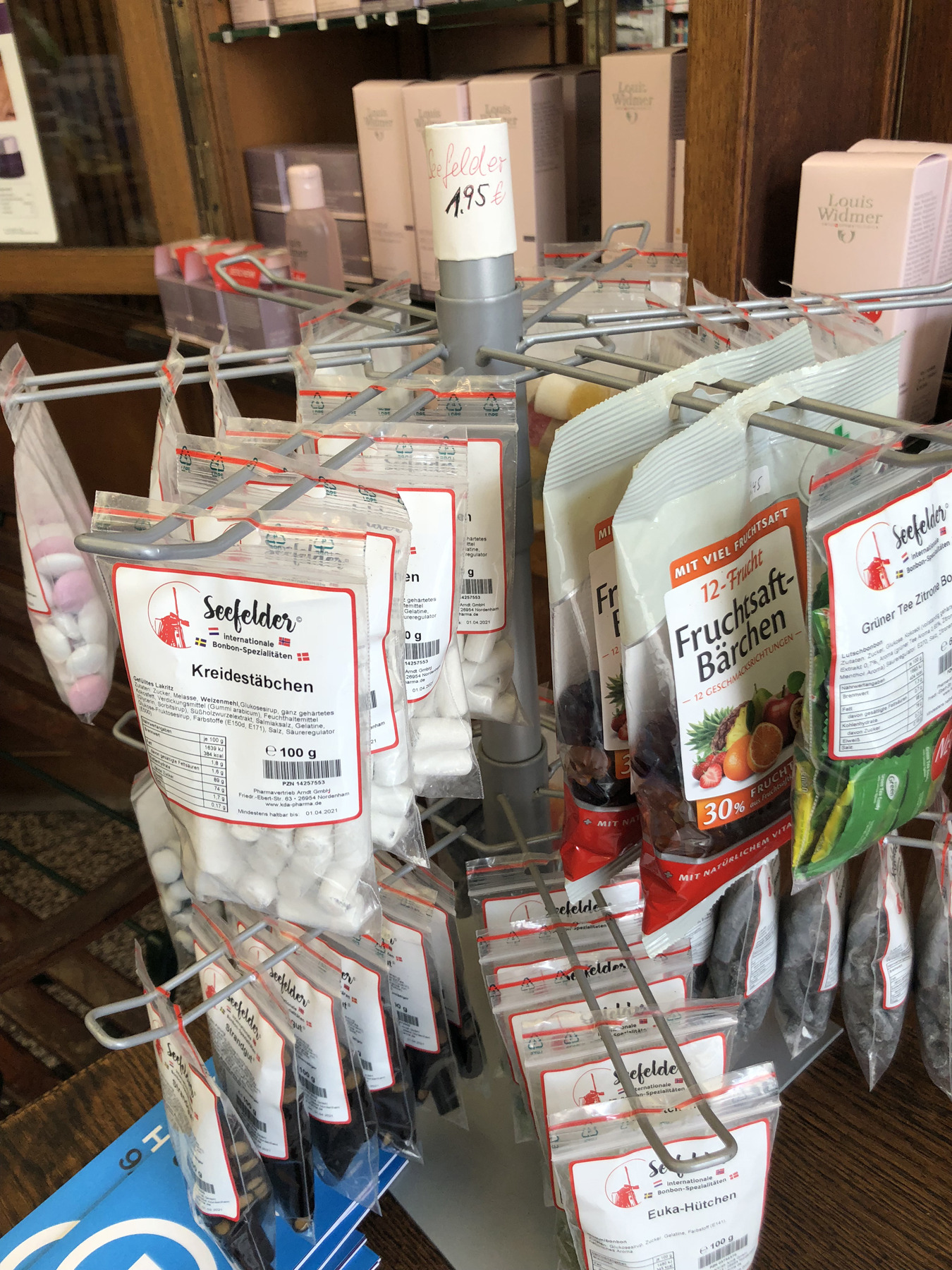 The lozenges for sale at Lillen Apotheke in Hamburg’s upscale Eppendorf neighborhood are sandwiched between licorice candies and fruit gummies. (Shefali Luthra/KHN)

There are exceptions. One that’s in striking contrast to American health policy: Insurers aren’t required to cover birth control pills for women older than 22. Pharmacists said that expense can run up to 60 euros per month — about $67 U.S. dollars — depending on the brand a woman gets. Under the Affordable Care Act, American insurance plans must cover contraception as a form of preventive medicine, with no cost sharing.

And, pharmacists and economists alike will acknowledge, even with the health halo effect German pharmacies enjoy, die Apotheke and the Walgreens have a common motivation.

At Lillen Apotheke, in Hamburg’s upscale Eppendorf neighborhood, a pharmacist acknowledged that stores like hers sell skin lotion, high-end nail polish (allegedly better for your fingers) or pharmacy-exclusive mascara (also hypoallergenic) not primarily for health reasons — but rather, to drive profits.

Take the lozenges for sale. They’re sandwiched between licorice candies (of which sugar is the first ingredient) and fruit gummies made specially for pharmacies, which claim to have natural vitamins, too. And, of course, these are positioned next to the chocolate.

What’s the health value there?

Shopping At The Apotheke: Compare German Pharmacies With Your Corner Drugstore