States are piling on.

Michigan took the first statewide shot at vaping early this month when it announced a ban on the sale of flavored e-cigarette products. It was soon joined by New York, and Rhode Island jumped in Wednesday. Massachusetts went further, announcing Tuesday that it would prohibit the sale of all vaping flavors and devices for four months.

But in California — which prides itself on progressive policies — lawmakers this year punted on a proposal for a statewide ban on flavored tobacco products.

California Gov. Gavin Newsom this month added that he didn’t have the authority to enact a flavor ban, as others states have, and instead announced funding for a new public awareness campaign and increased enforcement of the sale of e-cigarettes.

In the absence of a statewide ban — and as the number of people getting sick or dying from vaping mounts — California cities and counties are stepping in, including major population centers such as San Francisco and Los Angeles.

Local governments are taking the lead because they have to, said Tom Butt, the mayor of Richmond, Calif., which recently adopted a sweeping ordinance that bans the sale of all vaping products starting Jan. 1. The ban was modeled after the one San Francisco adopted in June.

“That’s where change happens first, in the cities,” Butt said. “Some states and particularly Congress are really slow to act on things like this.”

Livermore’s City Council approved a similar ban, and the San Joaquin County District Attorney’s Office expects to present one to county officials for consideration within the next few months.

Nearly 50 California jurisdictions prohibit or restrict the sale of flavored tobacco products or are considering ordinances. E-liquids, which are heated in vaping devices and can contain nicotine or marijuana, come in flavors like strawberry-pineapple and sweet desserts. Health officials are concerned that the flavors appeal to teens and preteens.

On Tuesday, the Los Angeles County Board of Supervisors is expected to hold a final vote on a proposal to ban the retail sale of all flavored tobacco products in the county’s unincorporated communities, home to about 1 million people.

In the city of Los Angeles — with a population of about 4 million people — City Attorney Mike Feuer is also calling for action.

“Enacting a citywide ban on the sale of all flavored tobacco products is the best way to safeguard our youth and protect the general public from significant health risks,” Feuer said.

Ana Ibarra discussed the ongoing outbreak of vaping-related respiratory illnesses, and the state and local response to it, with KPCC’s Take Two on Sept. 26.

Dr. Tony Kuo, director of the division of chronic disease and injury prevention at Los Angeles County’s Department of Public Health, said the ban on flavored tobacco products is needed in response to the growing outbreak of vaping-related respiratory illnesses.

The Centers for Disease Control and Prevention is investigating 805 cases of vaping-related lung illnesses in 46 states, including at least 12 deaths, that have been linked to both nicotine and cannabis vaping products. California officials are investigating nearly 100 cases. They have not yet been able to connect the illnesses to a particular flavor or chemical.

Of the two deaths related to the illnesses in California, one occurred in Los Angeles County.

“Even before that, we were monitoring the expansion of the e-cigarette epidemic among youth,” Kuo said.

Recent federal data funded by the National Institute on Drug Abuse show that 25% of this year’s high school seniors and 20% of 10th graders reported vaping nicotine in the past month. That’s more than double the use reported in 2017.

In addition to cities and counties that already adopted ordinances, a handful of California communities are considering flavor bans, while a few others are looking to follow San Francisco with an outright ban on all vapes.

A supervisor in San Mateo County — which already has a ban in place for the sale of flavored tobacco in unincorporated areas — now wants to ban all e-cigarettes. A San Jose City Council member has proposed a similar measure.

But these communities must brace themselves for an inevitable fight with Big Tobacco and the vaping industry. 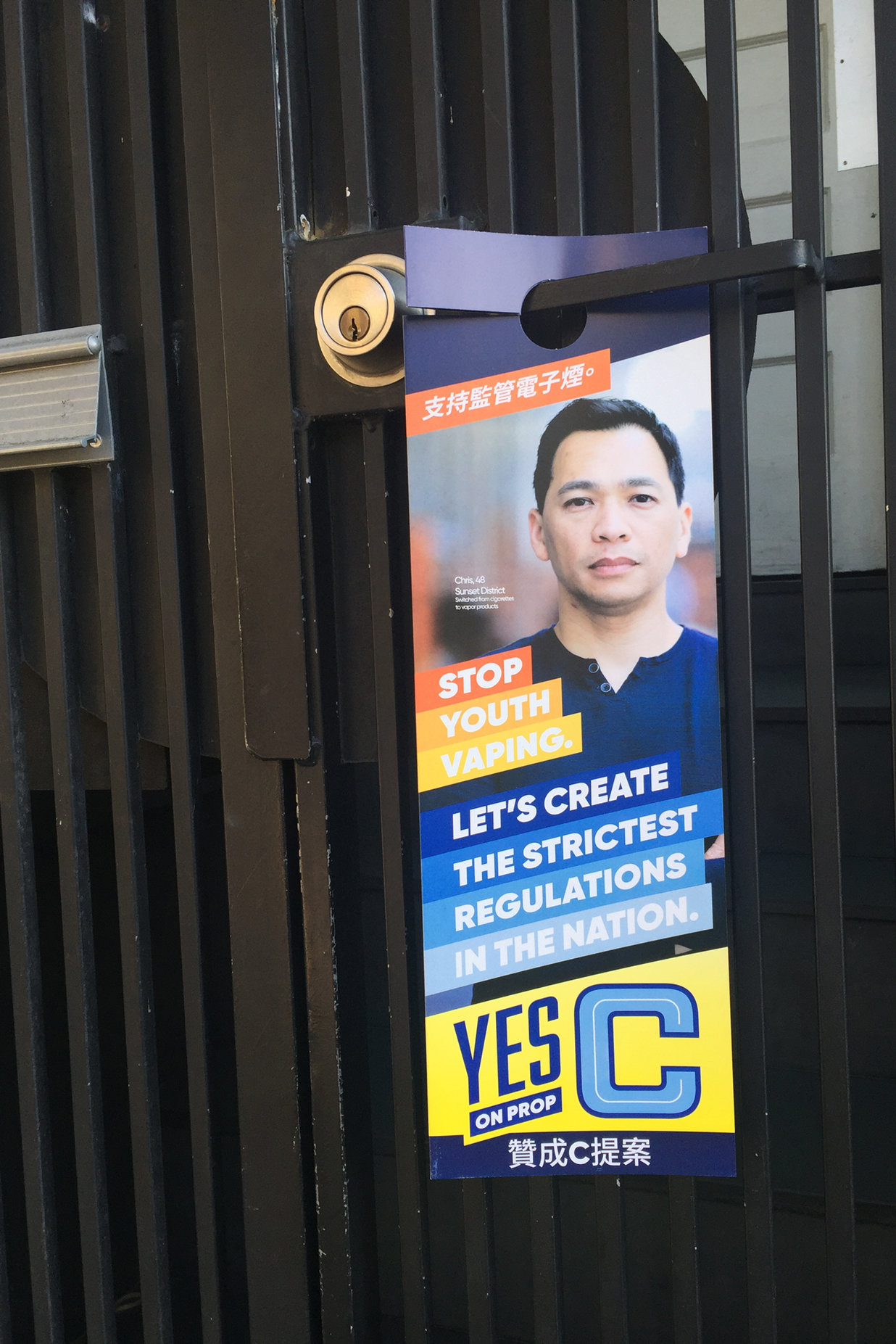 San Francisco-based Juul Labs, the manufacturer of the most popular e-cigarette, has already spent millions to promote Proposition C, a measure on the November ballot that would overturn the city’s e-cigarette ban. San Francisco’s Board of Supervisors approved the ban in June but it doesn’t take effect until early next year.

Meanwhile, Livermore has to place its ban on e-cigarette sales before voters after Juul successfully pushed a referendum to keep the ban from taking effect. Residents will vote in March.

The Vapor Technology Association, a Washington, D.C.-based lobbying group, said it advocates for sensible regulation in local governments, but wants to keep flavors as an option for adult consumers.

“We stand ready to work with individual cities and counties on thoughtful and effective regulations that restrict youth access, preserve flavored alternatives for adult smokers seeking to quit, and allow legal and responsible vape small business owners the ability to continue to operate in a regulated market,” Tony Abboud, executive director of the Vapor Technology Association, said in a statement.

Joseph Ditre, an associate professor of psychology at Syracuse University, said it makes sense that local governments and states are seeking solutions, but added that they should consider potential consequences.

“One concern would be a rise in the underground market and bootleg products,” he said. “It doesn’t take long to search the internet and find recipes to making nicotine juices that can be used in almost any vaping device,” Ditre said.

Butt, the mayor of Richmond, acknowledged the possibility of a rise in black-market products, but “the alternative is to do nothing,” he said.

“What we’re doing is not perfect, it’s not going to solve all the problems, but it’s better than doing nothing.”

State Sen. Jerry Hill (D-San Mateo) said statewide action would be more effective and harder for the industry to battle than local efforts. In the state legislative session that just ended, Hill introduced a bill that would have prohibited the sale of flavored tobacco products across California.

Strong opposition from the vaping and tobacco industries resulted in amendments that watered down the bill to exclude menthol-flavored tobacco, flavors for hookahs and any other flavored products that existed before 2000. Disappointed with the changes, Hill decided to pull his bill from consideration this year.

Even a moderate proposal by state Assemblyman Adam Gray (D-Merced), which would have added restrictions on the sale and advertisement of vaping products, could not make it out of the legislature this year.

Hill plans to come back with a stronger version, one that will include all flavors —with no exceptions.

“The crisis is becoming more evident,” he said. “Addiction is more real and the deaths are becoming almost a daily event, so we have to take some action or we’re not responsible legislators.”

States Target Vaping With Bans. In California, The Action Is Local.