UC President Janet Napolitano said the center will be led by Dr. Garen Wintemute, an internationally known epidemiologist and emergency room physician who gathers and analyzes gun violence data with an eye toward prevention. The new California Firearm Violence Research Center will be funded by $5 million in taxpayer funds allocated over five years, and will build on Wintemute’s existing efforts.

For 29 years, Wintemute directed the violence prevention research project, a pilot program he founded as a research arm of the UC Davis Medical Center. In tight budget years, Wintemute kept the project going with $1.3 million of his own money.

The $5 million for the new center was included in a package of 11 gun-control measures the state legislature approved in late June after high-profile mass shootings by a terrorist couple in San Bernardino and by a gunman at an Orlando, Fla., nightclub.

Even before that, however, Gov. Jerry Brown, had fast-tracked the funding by inserting it into a state budget trailer bill that was approved by the Legislature ahead of the gun control laws.

Wintemute said the funding was needed to fill a gap created 20 years ago when Congress halted Centers for Disease Control and Prevention grants for “any research engaging in any activities to advocate or promote gun control.”

Dr. Timothy W. Wheeler, director of Doctors for Responsible Gun Ownership, expressed opposition to the $5-million allocation in a March letter to state Sen. Lois Wolk, D-Davis, who had proposed the funds. “Now supporters of gun control in California wish to fund the same flawed and politically motivated advocacy research” that Congress nixed at the federal level, Wheeler wrote.

Napolitano said the center will be the first fully publicly funded institution of its kind and will provide unbiased data and recommendations for policymakers attempting to reduce gun violence.

On the East Coast, Johns Hopkins University and Harvard University operate such centers, both funded partially by private donations.

Napolitano could have put the firearm violence center on any of the UC campuses, but said she selected the UC Davis program because of its established resources.

UC Davis will take the lead in designing a plan for other UC campuses to participate in the research. “It is important that we draw upon the power of all the campuses to help tackle this issue,” she said. 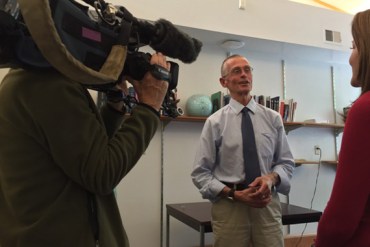 Wintemute said the boost in funding was long overdue.  “Funding for violence prevention research is crucial now, as we have a lot of catching up to do. For more than 20 years, there has been a moratorium on funding firearm research,” he said.

“Lack of a federal funding stream has prevented a full understanding of the root causes of violence and effective approaches to contain it.”

Napolitiano said UC Davis would accept applications for small grants from other UC campuses and encourage philanthropic support to sustain the research.

An advisory board for the center will include scholars, law enforcement officials, elected officials and other experts to provide research input, according to a university press release.

Establishing the center “demonstrates great leadership by the state and presents a unique opportunity for the University of California to be at the forefront of researching a growing public health issue,” Napolitano was quoted as saying in the release.