Asian Health Services, a community health center in Oakland’s buzzing Chinatown, sees about 6,000 dental patients a year. Hundreds of others are on a waiting list.

But now that voters have passed soda taxes in Oakland, Albany and San Francisco, Le and other Bay Area health providers are eyeing millions of dollars in revenue that could help more patients prevent obesity and dental decay.

The San Francisco Bay Area is trying to lead the way in putting soda tax revenues to good use, and cities around the country are watching closely. Some are considering soda taxes of their own. 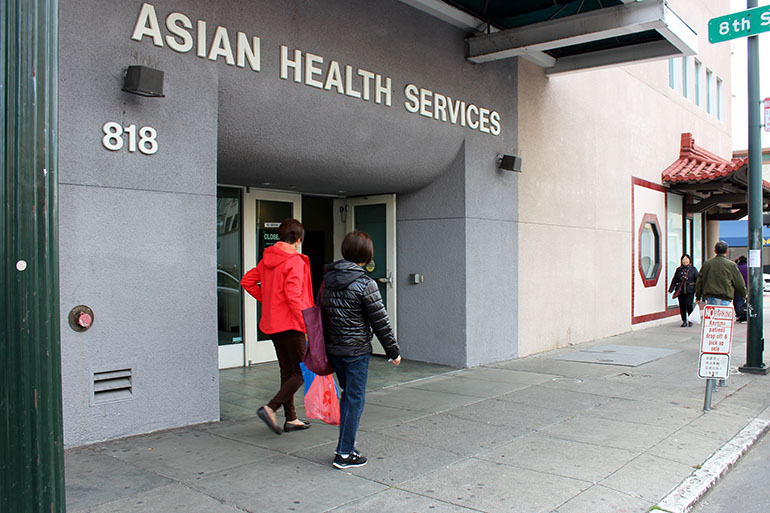 Asian Health Services, a community health center, supports the city’s tax on sugary beverages in hopes that revenue collected from the tax will go towards combating tooth decay. (Ana B. Ibarra/California Healthline)

The city of Berkeley, also in Alameda County, passed the nation’s first such tax in 2014.

In San Francisco, the tax, which takes effect Jan. 1, 2018, is expected to raise up to $15 million annually. Meanwhile in the smaller city of Albany, the tax took effect immediately and is projected to garner $223,000 each year. In Oakland, the penny-per-ounce tax on the distribution of sugar-sweetened beverages is projected to bring in up to $8 million each year, some of which will be used for health education and prevention programs in schools and the community. It takes effect in July.

“We felt this was very important because of the dental needs we see within our patient population,” Le said. “We know there’s a strong link between tooth decay and sugary beverages.”

The link between sugary beverages and obesity, diabetes and tooth decay is well-established. People who drink one or two cans of sugary drinks per day have a 26 percent greater risk of developing type 2 diabetes, according to one study by the Harvard School of Public Health.

A separate study found that for every 12-ounce soda consumed by a child each day, their odds of becoming obese increased by 60 percent. Soda also has been tied to dental erosion which can lead to cavities, according a 2009 study. The most frequent sources of erosive acids are soft drinks like cola, the study found.

In a report earlier this this year, an oversight commission criticized the state’s dental program for the poor, finding that California is seeing an “epidemic of tooth disease in which toddlers by the thousands have mouthfuls of cavities, children and adults are plagued with toothaches.” This is made worse when families struggle to get an appointment with a dentist, the report said.

In Oakland and the rest of Alameda County, one third of children consume one or more sugary drinks a day.

Oakland’s city council will establish a community advisory board to oversee the distribution of soda tax money, and local health advocates want to make sure they’re well-represented, Le said.

Goldstein said the fact that measures recently passed in all three Bay Area cities by a notable margin — in Oakland the tax was approved with 61 percent of the vote — shows that Californians grasp the harmful effects of sugary drinks.

Soda taxes, he said, are significant because they raise money to be used in the fight against obesity and other chronic conditions, and they reduce the consumption of sugary drinks.

In Berkeley’s low-income neighborhoods, the consumption of soda and other sweetened beverages decreased by 21 percent in the months after the 2014 tax began, according to a UC Berkeley study.

The study also showed a 63 percent increase in the consumption of bottled or tap water. It is not clear whether these results are due to the higher retail prices of sugary drinks or to the increased awareness on the health effects associated with the beverages, the study notes.

Goldstein said similar outcomes can be expected in Oakland, San Francisco and Albany, as well as in Boulder, Colo., where voters also passed a similar tax in November. This drives up the total number of cities with soda taxes to six — Philadelphia passed a 1.5 cents-per-ounce tax in June.

The American Beverage Association, which has lobbied heavily against soda taxes nationwide, doesn’t see a movement. Spokeswoman Lauren Kane said that 43 soda tax proposals have been rejected since 2008.

The association will continue to focus on reducing calories and sugar in beverages, Kane said. These taxes, Kane said, are only a Band-Aid solution to the larger national obesity problem.

But they are a start, said Elizabeth Bautista, a health educator at La Clinica, a health center in Oakland’s Fruitvale neighborhood, home to the city’ largest Latino population.

Bautista and 15 volunteer health educators known as promotoras engaged their community in the soda tax discussion by going door-to-door and making hundreds of calls to registered voters.

The challenge now, Bautista said, is to continue to motivate people to choose alternatives to sugary drinks.

The promotoras often share stories of what they see in the field: toddlers with soda in their bottles, and families walking out of dollar stores with grocery bags full of juices and sports drinks.

“It’s a serious problem in our community, and there is so much misinformation floating around,” Bautista said. She often hears from families that fruit-flavored sodas are not as harmful as dark sodas. “That of course is not true; that’s a myth we have to eliminate,” she said.

Maria Reyes, one of the promotoras, said the clinic is starting additional nutrition and physical activity classes — a healthy cooking class, for example, is expected to be of great interest. These are the type of activities that could be expanded by funds from the soda tax, Reyes said.

Reyes believes soda tax advocates in Oakland learned a lot from battles lost in other California cities, such as Richmond and El Monte, where voters rejected soda taxes in 2012.

The promotoras say they are now hearing from community groups in Contra Costa cities interested in following in their footsteps.

“This is a big win,” Reyes said. “Once we start seeing results, I think more cities will join us.”