This story is part of a partnership that includes WABE, NPR and Kaiser Health News.

Herman Ware got his seasonal flu shot while sitting at a small, wobbly table inside a mobile health clinic. The clinic-on-wheels is a large converted van, and on this day it was parked on a trash-strewn, dead-end street in downtown Atlanta where homeless residents congregate.

The van and Ware’s flu shot are part of a “street medicine” program designed to bring health care to people who haven’t been able to pay much attention to their medical needs. For those who struggle to find a hot meal or a place to sleep, health care can take a back seat.

As he anticipated the needle, Ware recalled previous shots and said, “It might sting.” He grimaced slightly as the nurse injected his upper arm.

After filling out paperwork, he climbed down the van’s steps and walked back to a small cluster of tents. Ware lives in the nearby homeless encampment tucked below an interstate overpass, next to a busy rail line.

It’s a public health strategy that can be found in dozens of cities in the United States and around the world, according to the Street Medicine Institute, which works to spread the practice. 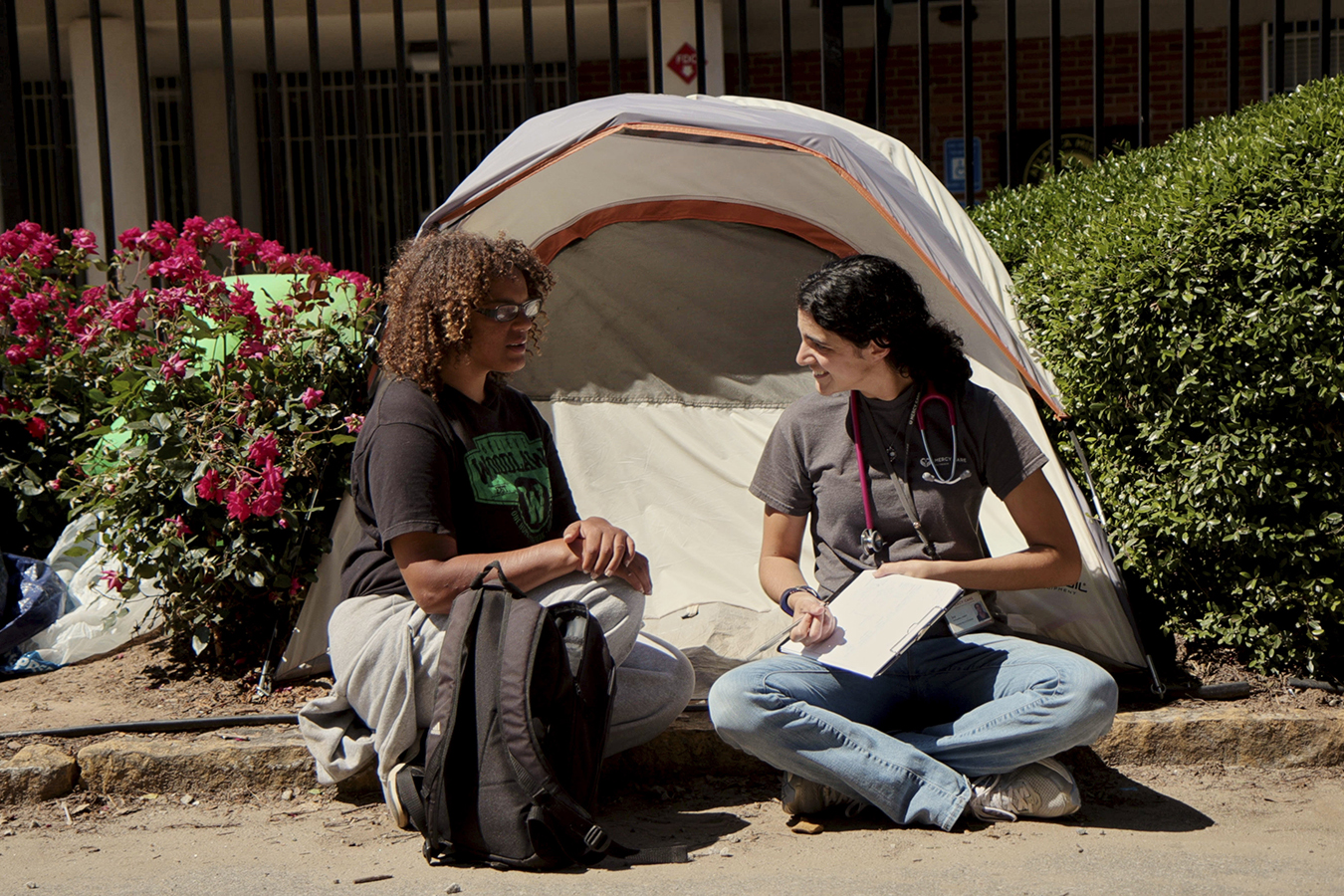 Joy Fernandez de Narayan, who runs Mercy Care’s Street Medicine and Community Health Outreach programs, talks with Danielle Storms about her health and treatment outside the Atlanta Day Shelter for Women and Children. (Chris Ryan at Once Films courtesy of the Catholic Health Association)

Getting homeless patients to accept help, whether it’s a vaccination or something simpler — like a bottle of water — can be challenging. And giving shots and conducting exams outside the walls of a health clinic often requires a different approach to health care.

“We’ll sit down next to someone, like, ‘Hey, how’s the weather treating you?'” she said.

“And then kind of work our way into, like, ‘Oh, you mentioned you had a history of high blood pressure. Do you mind if we check your blood pressure?'”

It can take several encounters to gain someone’s trust and get them to accept medical care, so the outreach workers spend a lot of time forging relationships with homeless clients.

Their persistent encouragement was helpful for Sopain Lawson, who caught a debilitating foot fungus while living in the encampment.

“I couldn’t walk,” Lawson said. “I had to stay off my feet. And the crew, they took good care of my foot. They got me back.” 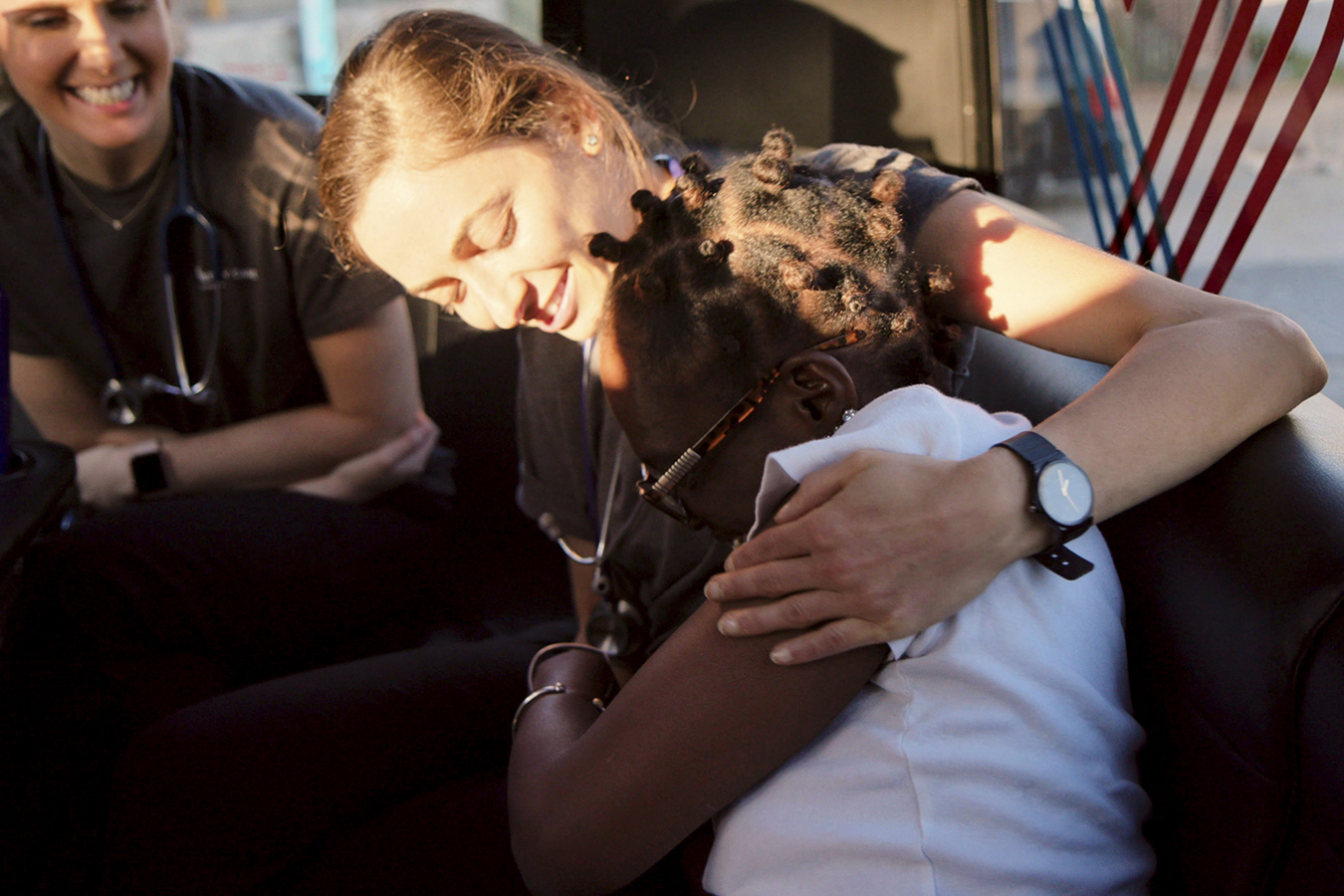 Sopain Lawson gets a hug from an Emory nursing student. Emory nursing students can choose to do a four-week rotation with Mercy Care’s Street Medicine program. Lawson developed a debilitating foot fungus while living in a homeless encampment. (Chris Ryan at Once Films courtesy of the Catholic Health Association)

“This is what street medicine is about — going out into these areas where people are not going to seek attention until it’s an emergency,” said Matthew Reed, who’s been doing social work with the team for two years.

‘Go To The People’

The street medicine team members use the trust they’ve built with patients to eventually connect them to other services, such as mental health counseling or housing.

Access to those services may not be readily available for many reasons, said Dr. Stephen Hwang, who studies health care and homelessness at St. Michael’s Hospital in Toronto.

Sometimes the obstacle — not having money for a bus ticket, for example — seems small, but is formidable.

“It may be difficult to get to a health care facility, and often there are challenges, especially in the U.S., where people [may not] have health insurance,” Hwang said.

Georgia is among a handful of states that have not expanded Medicaid to all low-income adults, which means many of its poorest residents don’t have access to the government-sponsored health care program.

But even when homeless people are able to get health coverage and make it to a hospital or clinic, they can run into other problems.

“There’s a lot of stigmatization of people who are experiencing homelessness,” Hwang said, “and so often these individuals will feel unwelcome when they do present to health care facilities.”

He’s the medical director of the Street Medicine Institute and started making outreach visits to the homeless in 1992, when he worked at a clinic in Pittsburgh.

“Health care likes people to come to it on its terms,” Withers said, while the central tenet of street medicine is, “Go to the people.” 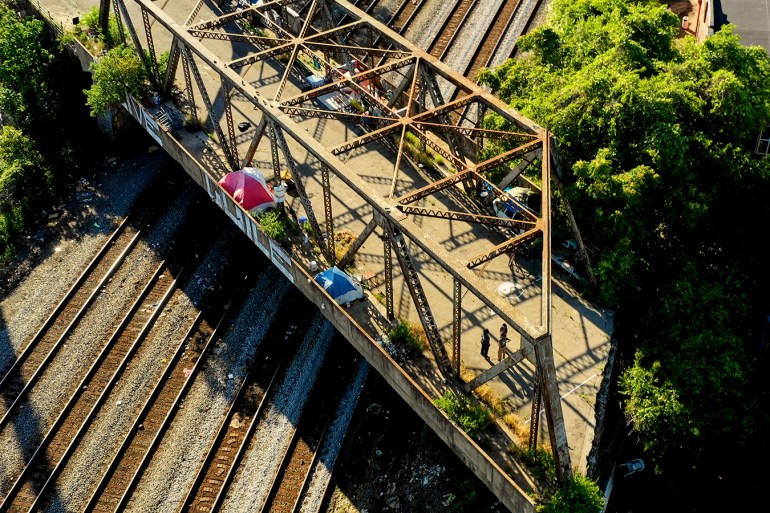 A drone view of what the Mercy Care Street Medicine team calls "the bridge to nowhere," where people experiencing homelessness set up camp.(Chris Ryan at Once Films courtesy of the Catholic Health Association) 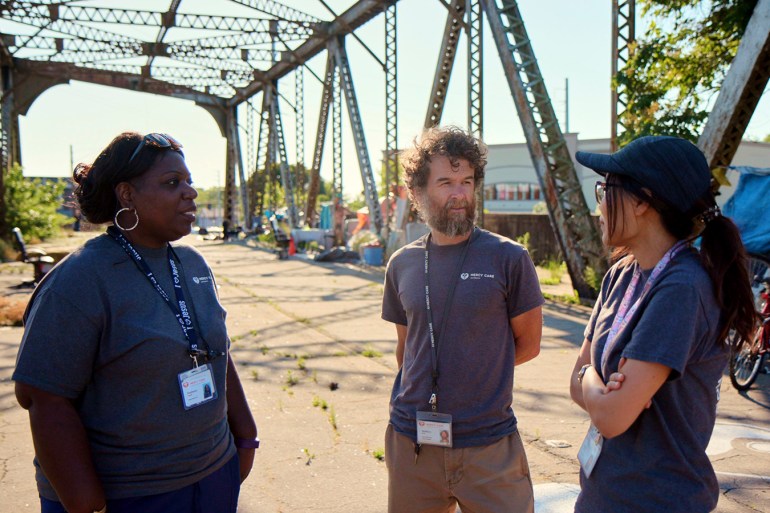 Mercy Care in Atlanta spends about $900,000 a year on its street medicine program. In 2018, that sum paid for direct treatment for some 300 people, many of whom got services multiple times. Street clinics can help relieve the care burden of nearby hospitals, which Withers said don’t have a great track record in treating the homeless.

“We’re not dealing with them well,” Withers said, speaking about American health care in general. In traditional health settings, homeless patients do worse compared with other patients, he said.

Those extra days and clinical complications mean additional costs for hospitals. One estimate cited in a 2017 legislative report on homelessness suggested that more than $60 million in medical costs for Atlanta’s homeless population were passed on to taxpayers.

Mercy Care said its program makes homeless people less likely to show up in local emergency rooms and healthier when they do — which saves money.

It’s past sundown when the street medicine team rolls up to the day’s final stop: outside a church in Atlanta where the homeless often gather. A handful of people have settled down for the night on the sidewalk. Among them is Johnny Dunson, a frequent patient of the Street Medicine program.

Dunson said the Mercy Care staffers have a compassionate style that makes it easy to talk to them and ask for help.

“You gotta let someone know how you’re feeling,” Dunson said. “Understand me?

Sometimes it can be like behavior, mental health. It’s not just me. It’s a lot of people that need some kind of assistance to do what you’re supposed to be doing, and they do a wonderful job.”

Along with medical assistance, the staff at Mercy Care give patients doses of respect and dignity.

This story is part of a partnership that includes WABE, NPR and Kaiser Health News, an editorially independent program of the Kaiser Family Foundation.

An Atlanta Nonprofit Brings Medical Care And Connection To The Homeless