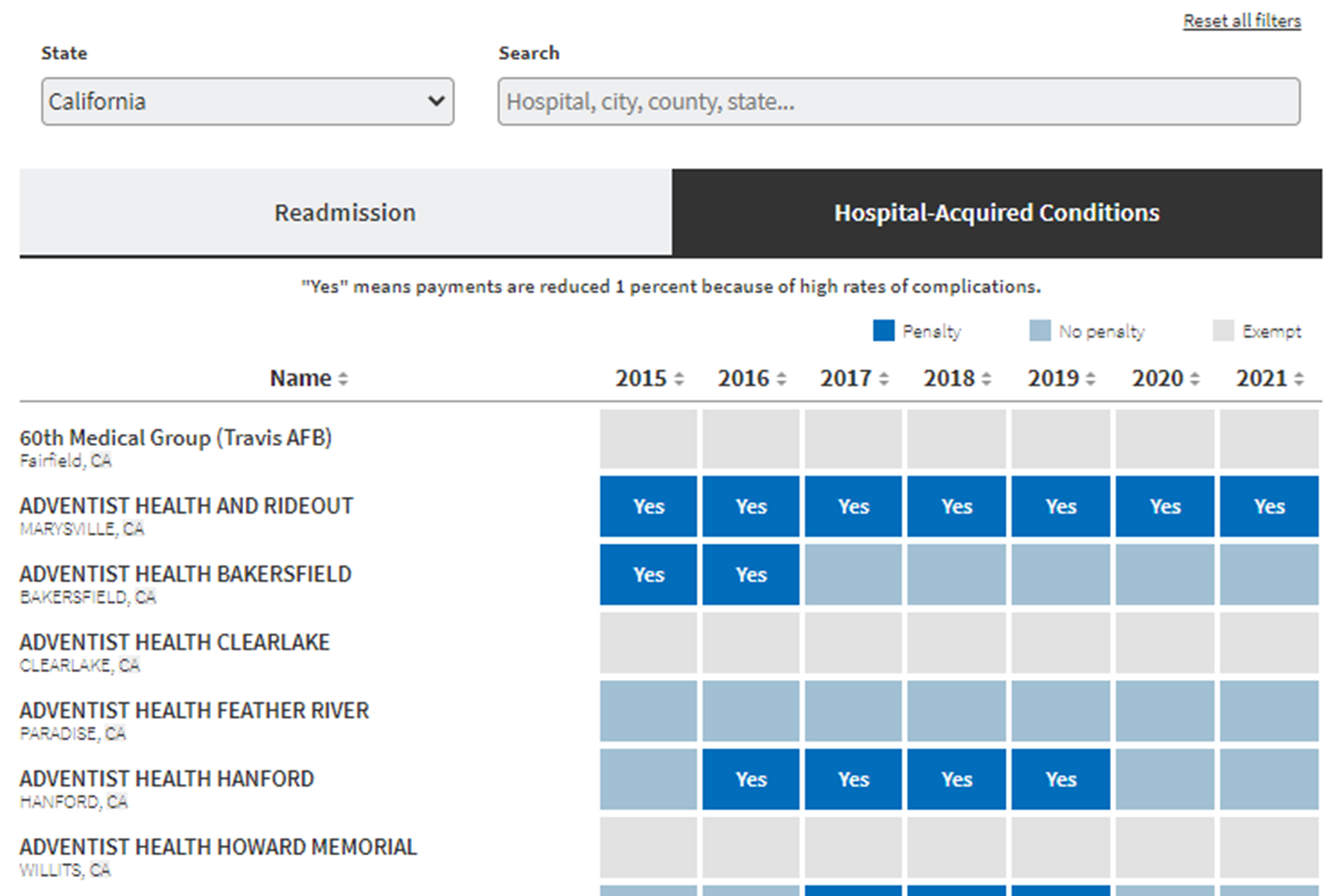 Look-Up Tool
Here are the hospitals hit with safety penalties for 2021. You can filter by location, hospital name or year.

The federal government has penalized 774 hospitals for having the highest rates of patient infections or other potentially avoidable medical complications. Those hospitals, which include some of the nation’s marquee medical centers, will lose 1% of their Medicare payments over 12 months.

The penalties, based on patients who stayed in the hospitals anytime between mid-2017 and 2019, before the pandemic, are not related to covid-19. They were levied under a program created by the Affordable Care Act that uses the threat of losing Medicare money to motivate hospitals to protect patients from harm.

On any given day, one in every 31 hospital patients has an infection that was contracted during their stay, according to the Centers for Disease Control and Prevention. Infections and other complications can prolong hospital stays, complicate treatments and, in the worst instances, kill patients.

“Although significant progress has been made in preventing some healthcare-associated infection types, there is much more work to be done,” the CDC says.

Now in its seventh year, the Hospital-Acquired Condition Reduction Program has been greeted with disapproval and resignation by hospitals, which argue that penalties are meted out arbitrarily. Under the law, Medicare each year must punish the quarter of general care hospitals with the highest rates of patient safety issues. The government assesses the rates of infections, blood clots, sepsis cases, bedsores, hip fractures and other complications that occur in hospitals and might have been prevented. The total penalty amount is based on how much Medicare pays each hospital during the federal fiscal year — from last October through September.

Hospitals can be punished even if they have improved over past years — and some have. At times, the difference in infection and complication rates between the hospitals that get punished and those that escape punishment is negligible, but the requirement to penalize one-quarter of hospitals is unbending under the law. Akin Demehin, director of policy at the American Hospital Association, said the penalties were “a game of chance” based on “badly flawed” measures.

Some hospitals insist they received penalties because they were more thorough than others in finding and reporting infections and other complications to the federal Centers for Medicare & Medicaid Services and the CDC.

“The all-or-none penalty is unlike any other in Medicare’s programs,” said Dr. Karl Bilimoria, vice president for quality at Northwestern Medicine, whose flagship Northwestern Memorial Hospital in Chicago was penalized this year. He said Northwestern takes the penalty seriously because of the amount of money at stake, “but, at the same time, we know that we will have some trouble with some of the measures because we do a really good job identifying” complications.

There were 2,430 hospitals not penalized because their patient complication rates were not among the top quarter. An additional 2,057 hospitals were automatically excluded from the program, either because they solely served children, veterans or psychiatric patients, or because they have special status as a “critical access hospital” for lack of nearby alternatives for people needing inpatient care.

The penalties were not distributed evenly across states, according to a KHN analysis of Medicare data that included all categories of hospitals. Half of Rhode Island’s hospitals were penalized, as were 30% of Nevada’s.

All of Delaware’s hospitals escaped punishment. Medicare excludes all Maryland hospitals from the program because it pays them through a different arrangement than in other states.

The Medicare Payment Advisory Commission, which reports to Congress, said in a 2019 report that “it is important to drive quality improvement by tying infection rates to payment.” But the commission criticized the program’s use of a “tournament” model comparing hospitals to one another. Instead, it recommended fixed targets that let hospitals know what is expected of them and that don’t artificially limit how many hospitals can succeed.

Although federal officials have altered other ACA-created penalty programs in response to hospital complaints and independent critiques — such as one focused on patient readmissions — they have not made substantial changes to this program because the key elements are embedded in the statute and would require a change by Congress.

Boston’s Beth Israel Deaconess said in a statement that “we employ a broad range of patient care quality efforts and use reports such as those from the Centers for Medicare & Medicaid Services to identify and address opportunities for improvement.”

UCSF Health said its hospital has made “significant improvements” since the period Medicare measured in assessing the penalty.

“UCSF Health believes that many of the measures listed in the report are meaningful to patients, and are also valid standards for health systems to improve upon,” the hospital-health system said in a statement to KHN. “Some of the categories, however, are not risk-adjusted, which results in misleading and inaccurate comparisons.”

Cedars-Sinai said the penalty program disproportionally punishes academic medical centers due to the “high acuity and complexity” of their patients, details that aren’t captured in the Medicare billing data.

“These claims data were not designed for this purpose and are typically not specific enough to reflect the nuances of complex clinical care,” the hospital said. “Cedars-Sinai continually tracks and monitors rates of complications and infections, and updates processes to improve the care we deliver to our patients.”