President-elect Joe Biden has tapped California Attorney General Xavier Becerra to lead the U.S. Department of Health and Human Services. Becerra, who would be the nation’s first Latino HHS secretary, has taken some ground-breaking positions on health care, especially since he became attorney general in 2017.

He has sued the Trump administration dozens of times on health care, birth control, immigration, climate change and more, with California leading the defense of the Affordable Care Act before the U.S. Supreme Court. Becerra has also won a major legal settlement from Sutter Health after accusing the nonprofit health care giant of using its market dominance in Northern California to illegally drive up prices.

Becerra told California Healthline last year that his views have been shaped by his experience as the son of Mexican immigrants. Describing his mother’s miscarriage, he said that everyone should be able to go to the doctor: “For me, health care is a right,” he said. “I’ve been a single-payer advocate all my life.”

Here’s more of what he told California Healthline and KHN about his views on health care in the past few years:

Early last year, Becerra told Samantha Young, California Healthline’s state politics correspondent, about his experience as the child of immigrants, and how that shaped his legal and political career. 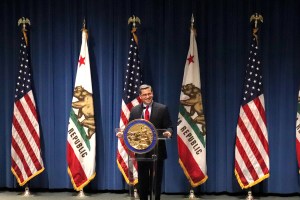 Xavier Becerra, the state’s first Latino attorney general, is one of President Donald Trump’s most relentless adversaries. He attributes his legal values — and his opposition to the current administration — to his upbringing as the son of Mexican immigrants.

Becerra joined KHN chief Washington correspondent Julie Rovner on her “What the Health?” podcast two years ago about his emphasis on health care as attorney general.

In this episode of KHN’s “What the Health?” Julie Rovner of Kaiser Health News, Rebecca Adams of CQ Roll Call, Stephanie Armour of The Wall Street Journal and Joanne Kenen of Politico discuss how protections for people with preexisting conditions have become a top issue in the elections, Trump administration efforts to make prescription drug prices more public and the start of Medicare’s annual open-enrollment period. Plus, Rovner interviews California Attorney General Xavier Becerra.

Last month, Becerra spoke with Samantha Young about his defense of the Affordable Care Act before the U.S. Supreme Court. 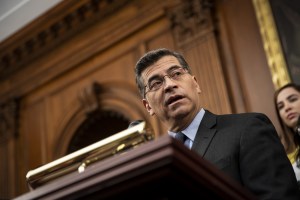 The U.S. Supreme Court will hear arguments Tuesday in a case that could overturn the Affordable Care Act. California Attorney General Xavier Becerra, who is defending the law with the backing of more than 20 other states, told California Healthline that he predicts the justices will uphold it.

KHN, which publishes California Healthline, is an editorially independent program of KFF.

Xavier Becerra in His Own Words: ‘Health Care Is a Right’