WASCO, Calif. — Kira Hinslea wanted to play outside, but she knew she couldn’t until her mom checked an air-quality app on her phone.

“Is it OK?” the 6-year-old eagerly asked her mother, Shirley Hinslea, one day late last month.

Hinslea gave Kira the green light, and the child beamed with excitement. “Yes! Yes! Yes!” she yelled, sprinting from the kitchen, across the living room and out to the porch of their mobile home in this small Kern County town.

Kira’s freedom didn’t last long. Within 20 minutes, her throat started to itch and her chest felt heavy, she told her mom. She wearily returned inside and sifted through her backpack for her inhaler.

Kira has had severe asthma since she was 2, and the polluted air in the San Joaquin Valley exacerbates her symptoms.

Valley residents inhale some of the dirtiest air in the nation, and families know to keep masks in their cars and inhalers within reach and to check the air quality on a daily — sometimes hourly — basis.

But Hinslea questions the air-quality readings. The mobile phone apps she uses to search for conditions in her ZIP code often lag hours behind the real-time data. Occasionally, apps and websites show conflicting readings, she said.

Hinslea is enrolled in the collaborative’s asthma management program, and it offered her one of the palm-sized devices. She jumped at the opportunity. The monitors cost about $230 and require a Wi-Fi connection. A map showing all active monitors around the world — along with their data — can be viewed online.

“For [Kira’s] health, I want to have the best, real-time information,” said Hinslea, 47, as a staff member from the collaborative mounted the monitor on the side of the house near her front door. 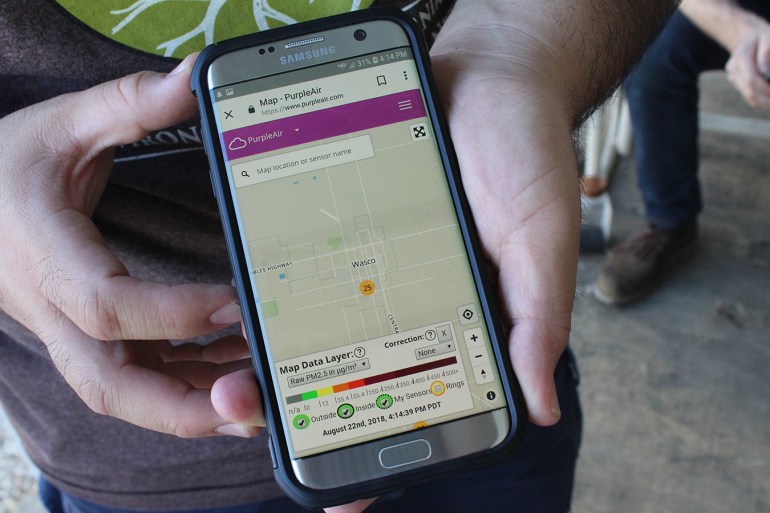 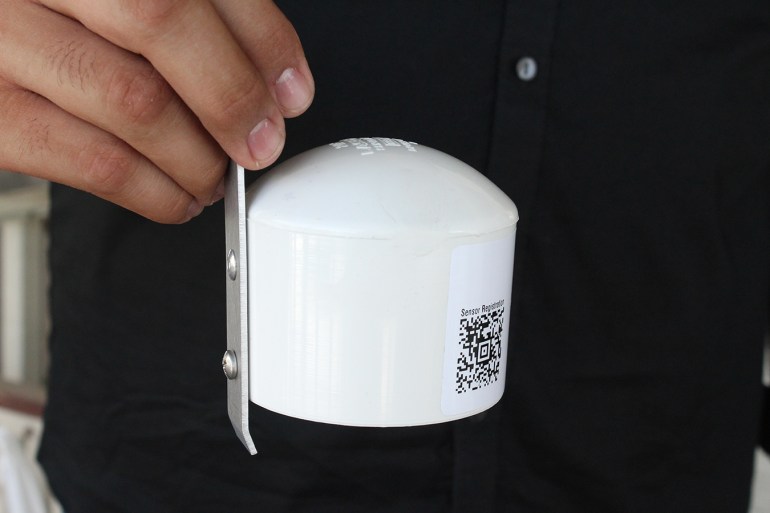 Health and environmental groups in the San Joaquin Valley are using off-the-shelf air monitors to begin collecting air-quality information at the neighborhood level while they wait for more sophisticated monitoring systems from the state. (Ana B. Ibarra/California Healthline)

Efforts by such nonprofits will supplement a new state law that aims to improve air quality — and air-quality monitoring — in communities such as Wasco that are heavily affected by air pollution.

As part of the law, the California Air Resources Board later this month is expected to name 10 polluted communities chosen to get help from the state to clean up their air. They will each have an air-monitoring system composed of several monitors strategically placed in different neighborhoods.

The monitors will track all types of air pollution, including the two most common: ozone, the main ingredient in smog, and particulate matter, which is pollution made up of ash, soot, diesel exhaust and other small particles.

The data from these monitoring systems will help communities identify specific pollution sources, such as sprayed pesticides, emissions from local oil refineries and from port operations. Then the California Air Resources Board and regional air districts will devise a plan to reduce those emissions, said Lindsay Buckley, a spokeswoman for the board. More communities will receive monitoring systems in later years. 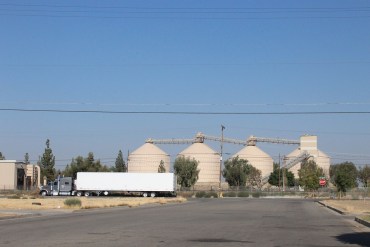 Wasco, Calif., in northwestern Kern County, has a population of about 26,000. It is surrounded by farm fields and agricultural operations — and isn’t far from oil fields. Pollution from these and other sources worries some residents.(Ana B. Ibarra/California Healthline)

The state plans to begin monitoring those communities by next July.

Although Wasco is not among the first communities to receive a tracking system from the state, its residents will likely benefit from the data collected and lessons learned in nearby Shafter, Buckley said.

Wasco, home to about 26,000 people, takes pride in having the ideal climate for growing roses. It is also a big almond producer.

Wasco is “surrounded 360 degrees by agricultural production,” he said, and the San Joaquin Valley is also a key player in oil and gas production for California.

“On top of that, we’re also in the middle of Highways 5 and 99,” Aguirre said. “So you have this cumulative effect from all these sources of pollution.” 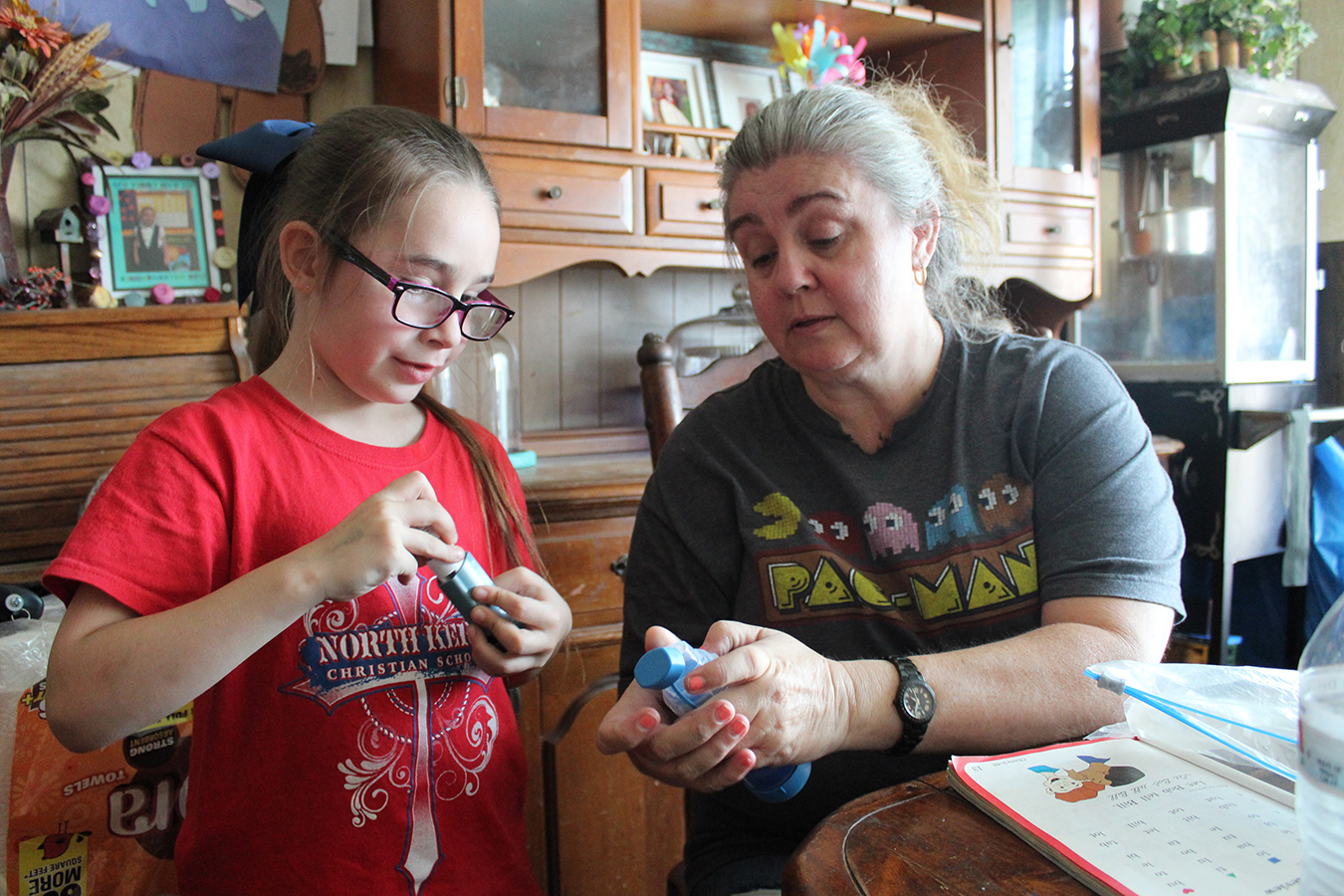 Kira Hinslea, 6, takes a puff from her inhaler after having some trouble breathing and feeling chest pressure. The dirty and dusty air in Wasco, Calif., exacerbates her asthma symptoms.(Ana B. Ibarra/California Healthline)

Wildfire smoke this summer compounded worries over air quality for residents in the region, including Hinslea. “Now you’ve got smoke, and dust and just everyday pollution. … It can get really bad,” she said. “You look outside and think, ‘Is it overcast or is it smog?’”

When her daughter Kira’s asthma flares up, the little girl often coughs and wheezes through the night and misses school the next day, Hinslea said.

Having more timely and reliable information from the small air monitor near her front door will help her decide if her daughter can go to school — and if she does, whether she should stay indoors during recess, she said.

“It wasn’t always like this,” said Hinslea, who was born and raised in Wasco. “When I was little, it seemed crisper and brighter, fresh. It was just different.”