In recent months, health aides who care for elderly Americans at home appeared at scores of rallies calling for better pay and workplace conditions. President Barack Obama and some of the presidential candidates have pledged to improve the lives of these workers, who often struggle on the poverty-level wages they are paid.

Now, thanks in part to the “Fight for $15” movement, hundreds of thousands of home care workers in at least five states, including California, will gradually receive significant hourly raises. And as result of a large organizing campaign, tens of thousands who have joined unions can negotiate for paid sick time, health and retirement benefits.

California became the first state to mandate a $15 minimum wage in April, when Gov. Jerry Brown signed a law raising it to that level by 2022. Small employers with 25 or fewer workers will have an additional year to comply.

Some parts of the state will get there sooner. In San Francisco, for example, a local ordinance requires the hourly minimum to hit $15 by 2018. In Los Angeles County and city, the minimum wage will reach the $15 mark by 2020.

“The Fight for $15 and the simultaneous benefits is an amazing, unprecedented thing that I don’t think anyone five years ago would have expected, given our hyper-polarized political environment,” said Laura Dresser, a labor economist at the University of Wisconsin-Madison who studies the impact of low wages. “This is a workforce that’s coming out of the shadows.”

People with a deep understanding of eldercare policy say that without improving conditions and raising pay, which hovers at $10 an hour, it will be impossible to meet skyrocketing demand for skilled and devoted workers.

In California, an estimated 460,000 caregivers participating in the state’s In-Home Supportive Services Program for low-income elderly and disabled people will benefit from the gradual rise in the state’s minimum  wage to $15 an hour. At present, they make as little as $10.00 an hour, the current minimum. Some caregivers have faced delays or nonpayment of their wages because of problems with the state program’s payment processing system.

Elder care policy experts argue that bigger paychecks and benefits will not have a significant impact on senior citizens unless their aides and assistants are also better screened, trained and organized.

” I think it’s going to take time and a different mindset to professionalize this job and improve outcomes,” said Carol Rodat, New York policy director for the Paraprofessional Healthcare Institute (PHI), which researches ways to transform eldercare. “Achieving better wages is a first step, but there are others that have to follow or you don’t get to the end point — improved outcomes for the clients.”

As it stands, the soaring number of Americans who choose home care over nursing homes have no organized national system to count on that guides the hiring, education or oversight of their caregivers. There is little or no data that tracks how well the home care is delivered. And yet, these workers, like those in a hospital, provide a lifeline, not only dressing, feeding, bathing and shopping for clients, but working with their health care providers and noticing when their illnesses progress or relapse.

“It’s been a growth industry people can get into with little to no experience and few barriers,” said Rodat, whose organization wants better state and federal oversight. “We have to totally re-engineer home care. It will take a massive change.”

In the past 20 years, the Service Employees International Union, which organized nurses, has focused on home care workers, a largely non-white, female workforce that earns as little as $8 an hour and is often unable to piece together a full day’s work. And earlier this year, these workers landed in the national spotlight when they joined the “Fight for $15” minimum wage campaign.

As a result, 500,000 home caregivers in 12 states have joined SEIU and can bargain for paid sick time and retirement benefits. And Massachusetts, California, New York, Washington and Oregon, and cities such as San Francisco, Seattle, Los Angeles, New York and Washington D.C., passed laws phasing in a $15 minimum wage or an equivalent indexed to inflation. An estimated 640,000 of the more than 2 million aides hired through agencies or hired privately will see raises.

The raises and union protections are concentrated in Northeastern and Western states. And they do not even cover the largest share of workers, the unpaid family members who care for a loved one. Nonetheless, many people who have worked closely on these issues see the changes as an important step in stabilizing what has been a marginal workforce. 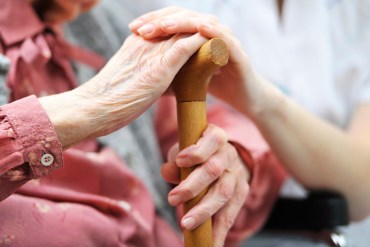 With an annual turnover of around 50 percent, home care workers now have among the lowest retention of any industry. Labor organizers say even those who wish to stay often leave for better pay and hours. Advocates note that a trusted caregiver can be pivotal to a person’s health and well-being.

“When you keep the same worker that individual is going to see changes in the client’s quality of life. They are more likely to say ‘Mrs. Smith usually doesn’t confuse her children,’” said Caitlin Connolly, the Home Care Fair Pay campaign coordinator with the National Employment Law Project.

But many people who work in eldercare or study it also say that paying workers more and keeping them on the job will not assure senior citizens a standard of care because of the large gaps in regulation. Currently, not all home care agencies even check applicants’ criminal histories, something not every state requires.

In a widely-cited study, researchers at Northwestern University’s medical school found that just 55 percent of the 180 agencies conducted a national background check. Only a third tested applicants for drug use, even though the job can mean frequent contact with medications.

The study, led by geriatrician Lee Lindquist, showed that many agencies hire unskilled workers off Craigslist and place them in homes of elderly people with physical and cognitive impairments.

Lindquist found aides, some of them illiterate, who mixed up medications or neglected to feed or move clients. Supervisors rarely checked in. And training was lax.

Federal law requires home health aides, who perform skilled nursing functions such as wound care, to have 75 hours of training. There is no mandated training for the largest, fastest-growing segment, the personal aides who assist with housekeeping and grooming. No continuing education is required.

“We see a huge prevalence of Alzheimer’s and dementia and depression and pulmonary disease and cardiac disease,” noted Rodat of PHI. “You’d think we’d want to give people extra training since they are on the front line.”

The increased training she and others are calling for costs more than many agencies and states say they can afford.

Home Care Associates, in Philadelphia provides up to 150 hours of training, along with continuing education and coaching from experienced supervisors.

“A lot of people who do this work have a real passion for it,” said Karen Kulp, president and CEO of the company. “But even if they get $15 an hour it’s not going to be any different without training, support and supervision. You’re not going to improve the quality of the work.”