Amid the buzz of hair clippers and the beat of hip-hop, barber Corey Thomas squeezes in a little advice to the clients who come into his Inglewood, Calif., shop for shaves and fade cuts. Watch what you eat, he tells them. Check your blood pressure. Don’t take life so hard.

“We’re a high statistic for … hypertension and everything, and it’s something we let go by,” Thomas said as he worked at the shop, A New You, on Friday. “Our customers, they’ll talk to us before they talk to anybody else.”

And that can be good for their health. Thomas, who himself has high blood pressure, helped lead a group of customers as part of a study published Monday in the New England Journal of Medicine showing that providing information and inviting a pharmacist onsite can go a long way toward helping black men reduce their blood pressure.

The group, which met for about a year in 2016, included a once-a-week visit from the pharmacist, who prescribed blood pressure medicine and followed up with the customers to make sure they were taking it. A blood pressure machine installed in the barbershop sent patients’ readings directly to their doctors and to the pharmacist. 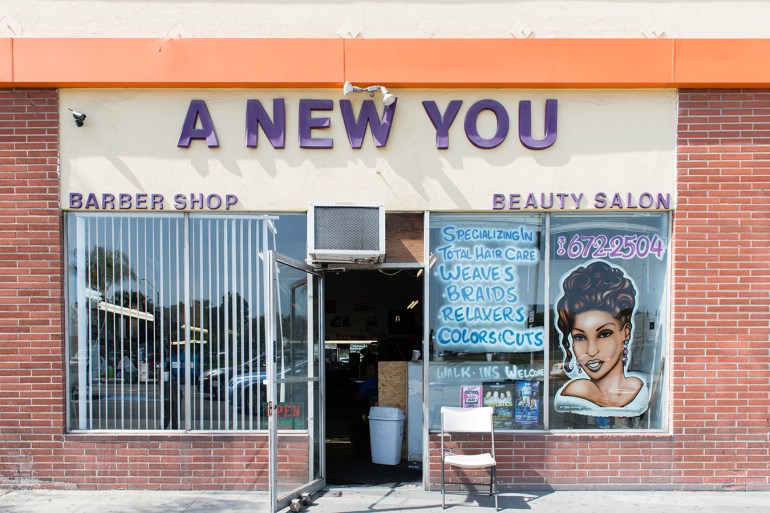 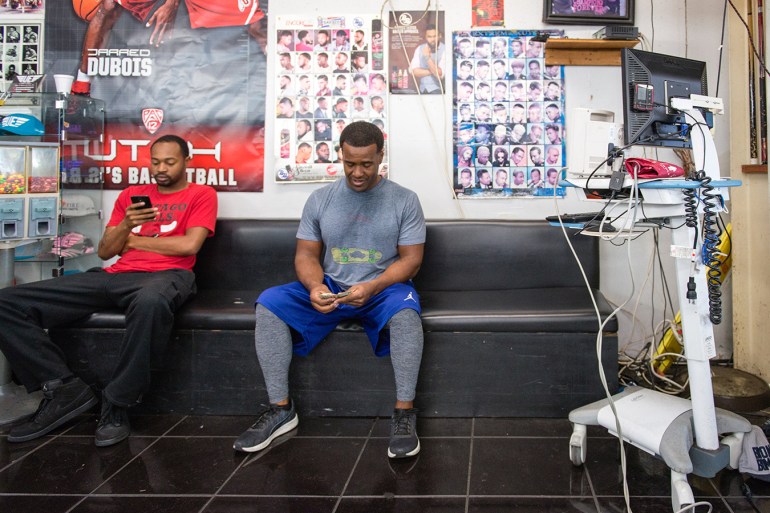 A blood pressure monitor sits in the corner of A New You. Thomas says clients use it regularly to check their blood pressure. (Heidi de Marco/California Healthline)

Researchers found that after six months, the men who received both the education from their barbers and the drug therapy from the pharmacists were more likely to see their blood pressure drop to a healthier level and remain under control than the comparison group that received only information and encouragement to see their doctors.

Nearly two-thirds of the men who got the drug therapy achieved a healthy blood pressure of less than 130/80 mm Hg, while only about 12 percent of the second group did.

“We all expected the intervention to be effective, but I don’t think any of us could have predicted the magnitude of the effect we ultimately saw,” said pharmacist Ciantel Adair Blyler, one of the co-authors of the study, who visited 10 different barbershops in Inglewood, Compton, Bellflower and Long Beach. She went to each shop once a week for a year to see patients, she said.

A team of pharmacists, along with physicians from several medical centers in Southern California, conducted the study at 52 Los Angeles-area barbershops with an $8.5 million federal grant from the National Heart, Lung, and Blood Institute.

Each of the 319 barbershop clients in the study had hypertension, defined as an average systolic blood pressure of 140 mm Hg or higher (that’s the maximum pressure exerted on the arteries when the heart is pushing blood through the body). They were randomly assigned to an intervention group or a control group.

Uncontrolled hypertension is one of the biggest health problems facing the African-American community, health officials say. It affects blacks more often, and at an earlier age, than whites and Hispanics, according to the federal Centers for Disease Control and Prevention. About 43 percent of black men have high blood pressure, compared to 34 percent of white men and 28 percent of Mexican Americans, CDC data show. 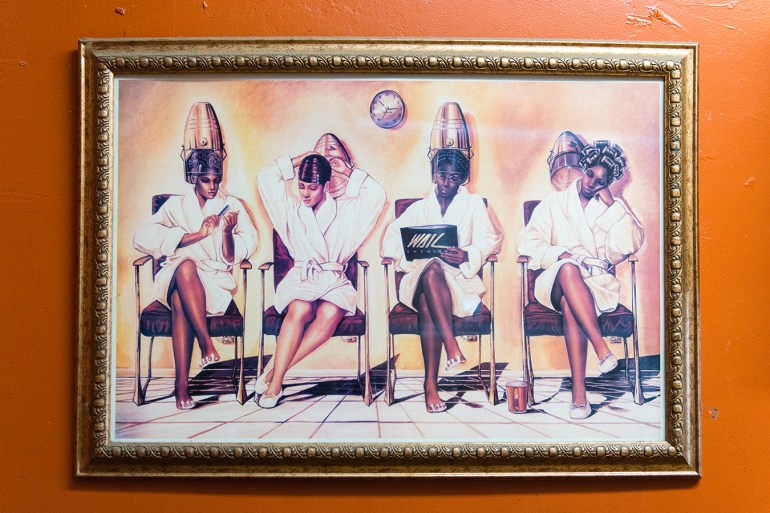 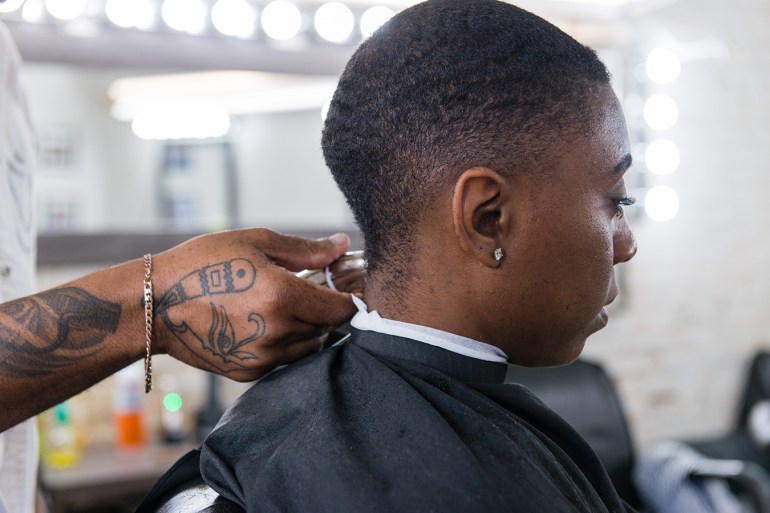 Stress related to racial discrimination, mistrust of the medical system and less frequent use of health care services and medications, are some of the reasons why African Americans are more likely to have high blood pressure, according to the CDC. Undetected hypertension can lead to heart and kidney damage as well as strokes and heart attacks.

Blyler said she and the team understood the mistrust, which is why they chose barbershops, traditionally a common venue for community gatherings in black neighborhoods.

“When you meet people where they are, there is a different level of trust and respect that’s earned,” Blyler said. “I think that’s why this intervention was ultimately so successful.”

But there were still some challenges gaining the trust of the barbershop patrons, Blyler observed. 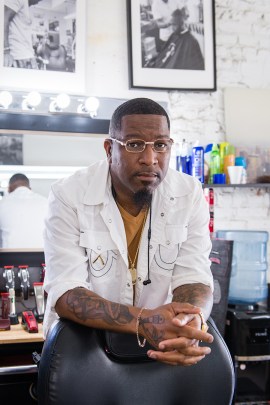 “The hurdle we had to get over was getting them to trust me, to trust that the medication I was prescribing was good for them, that it wasn’t an experiment and I wasn’t somehow financially benefiting from drug companies,” she said.

Once she earned their trust, the men were not shy about sharing their health history, Blyler said. “Many openly admitted to not going to see their doctors for long periods despite knowing they had high blood pressure and other untreated conditions.”

Thomas, the barber at A New You, agreed to participate in the study and help his clients check their blood pressure.

“One day one of the pharmacists asked me, ‘what about you?’” Thomas recounted. “I’m like, ‘Nah. I’m all right.’ … I’d been on high blood pressure medicine for like two years then. I said ‘I don’t like it. It’s messing my body up.’”

Thomas, 49, who had suffered a stroke six years before, said the pills he was taking made him feel sluggish. The pharmacist assigned to A New You was persistent. “They asked me about my lifestyle, how I ate and everything — as opposed to my doctor. He didn’t ask me nothing,” Thomas said.

The pharmacist changed his medicine, the blood pressure machine was moved in, and Thomas — as well as his patrons — started to listen.

With a little golf he plays now, and some changes in his diet, Thomas said his systolic blood pressure is down to 129. “I feel great,” he said, adding that “it’s also fulfilling” to help his customers control their blood pressure as well.

Even though the study is over, Thomas still talks to his customers about hypertension. And the blood pressure machine is still there for anyone to use.

Thomas said efforts like these can help change long-engrained habits among African-American men.

“A lot of us use the emergency room as doctors,” he said. “So I think [these] studies will help out a great deal.”

Black Men’s Blood Pressure Is Cut Along With Their Hair

The latest installment in CHCF’s Medi-Cal Explained series explains the procurement process and what it means for the future of Medi-Cal managed care and the millions of Californians it serves.