Denise Roberts is still coping with complications from a life-threatening bout of Valley Fever three years ago that claimed part of a lung. Roberts, who lives in Doyle, Calif., a tiny rural community near the Nevada border, typically drives to Reno for the care she needs. Specialists in her own state, she said, are too far away.

In an effort to reduce costs, the insurer has quietly decided to scale back participation in the national Blue Card program that since 1994 has allowed Blue Shield’s members to receive a range of primary and specialty care services out of state. That could be a big problem for frequent travelers, college students, snowbirds and other people who divide their time between states – and for rural patients like Roberts who live close to state borders.

The change applies only to members with individual market preferred provider health plans,- not those with group coverage or Medicare. The restrictions appear to be confined to California.

Susan Edwards, a longtime insurance broker in the northeastern town of Susanville, Calif., described Blue Shield’s new restrictions as “a huge deal. We’re in a border county, we’re very rural, so when we need medical care we go to Reno. That’s where the specialists are. That’s where the bigger hospitals are.”

Blue Shield of California – the third largest insurer in the state – covers about 720,000 people in individual PPO plans, according to the state’s Department of Managed Health Care. Nearly a fifth are in the state’s insurance marketplace, Covered California.  It’s impossible to know how many will be affected by the change.

“I now stand to lose either my coverage or my doctors when I have to renew this year,” said Roberts, 61, editor of a trade publication. “Tough choice to make when you’re held hostage by the insurance industry.”

Blue Shield of California downplayed the new restrictions. The insurer still will cover out-of-state emergency care, urgent care and some limited primary care, company officials said. It also will work with patients already undergoing a course of treatment in another state, and offer members the opportunity for telephone consultations with out-of-state doctors, spokeswoman Amanda Wardell said.

“We have a large network of providers in California,” Wardell said. “We’re trying to focus on affordability and part of that is focusing on our provider network in California. We’re able to manage our costs better.”

Kevin Knauss, a Sacramento-area health insurance agent who writes the InsureMeKevin blog, said he’s received calls from worried clients, including a man who divides his time between New York and California and a family that had hoped to seek highly specialized care outside California for their son’s brain disease.

In California’s competitive insurance market, she said, insurers are narrowing their networks of doctors and hospitals to lower their costs. 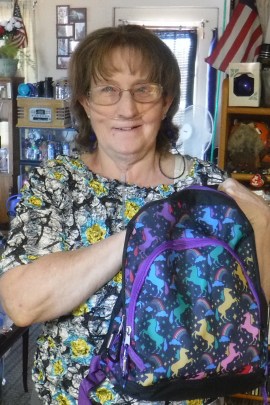 Denise Roberts of Doyle, Calif., has come to rely on doctors in nearby Reno, Nevada to treat lingering complications from Valley Fever. But she may have to change doctors and drive much farther for care in her home state -— or pick another insurer — because of a Blue Shield of California policy change.(Courtesy of Denise Roberts)

“Consumers are price-sensitive to premiums,” Corlette said. Under the ACA, “there is a more limited set of tools for insurers to lower premiums. They can’t discriminate against people based on their health status.”

Roberts, the Doyle resident, said that if she can’t get care in Reno – a roughly 45-minute drive from her home – she’ll have to travel through the Plumas Forest to Quincy, Calif., which takes nearly twice as long.

Roberts said she considered changing to Anthem Blue Cross, which still allows members access to out-of-state care through the Blue Card program. But she recalled having difficulties obtaining the care she needed when she was an Anthem client in the past.

“As a result, I’ve chosen to stay with Blue Shield and let the chips fall where they may,” she said.

Roberts’ health problems are significant: She nearly died from Valley Fever and had part of her left lung removed. She also suffers from heart disease, asthma, allergies and chronic obstructive pulmonary disease.

Dena Mendelsohn, a San Francisco-based senior attorney for Consumers Union, said all insurers need to ensure that their members – including rural residents – have timely access to both primary care and specialty doctors.

No law forces insurers to provide non-emergency care outside their regions, Mendelsohn said, but if Blue Shield is “lemon-dropping” – trying to get costlier members to drop their coverage – “it would be problematic.”

“It’s really important for consumers to really shop around and understand their options during open enrollment season,” which ends in California on Jan. 15, Mendelsohn said.