LOS ANGELES — Gary Carmona thought he could do it all. He’s run companies and chaired nonprofit boards. But since his wife was diagnosed with dementia, Carmona, 77, has felt overwhelmed.

“I really see myself at times crashing,” he said. “In my mind, I’m saying, ‘You know, I can’t really handle all this.’”

There was the time his wife, Rochelle, wandered outside and fell down. And the time she boiled water and walked away, leaving the burner on.

“I’m always double-, triple-, quadruple-checking everything that she’s around,” he said.

Carmona was among about 25 people who went to a Los Angeles-area adult day care center on a recent Saturday for a daylong “caregiver boot camp.” In the free session, funded in part by the Archstone Foundation, people caring for patients with Alzheimer’s or another form of dementia learned how to manage stress, make their homes safe and handle difficult patient behaviors. They also learned how to keep their loved ones engaged, with card games, crossword puzzles or music.

Doctors and researchers increasingly recognize that caring for people with dementia compromises the physical and mental health of the caregivers. And that, in turn, jeopardizes the well-being of the people they are caring for. Some studies have shown that the burden on caregivers may increase the likelihood that the loved ones in their charge will be placed in a nursing home.

“People with Alzheimer’s who have stressed caregivers have been shown to have poor outcomes,” said Zaldy Tan, the medical director of the UCLA Alzheimer’s and Dementia Care Program who created the boot camp. “Their caregivers have essentially thrown in the towel.”

People with dementia are also more likely to go to the emergency room and be hospitalized if their caregivers aren’t prepared for the job, Tan said.

That’s one of the main reasons why UCLA Health and its geriatrics division started its caregiver boot camps in 2015.

UCLA holds four boot camps a year at community and senior centers around Southern California and hopes to expand over the next year to meet the growing need. About 5 million Americans, 1 in 10 people over 65, have Alzheimer’s disease — a number that could balloon to 16 million by 2050, according to the Alzheimer’s Association.

Tan started the recent session by explaining the progression of dementia, noting that in its later stages people often don’t remember their loved ones.

“Do they all reach that stage?” asked one woman, who takes care of her sister.

“They do, if they live long enough,” Tan said. “I know it’s heartbreaking.” 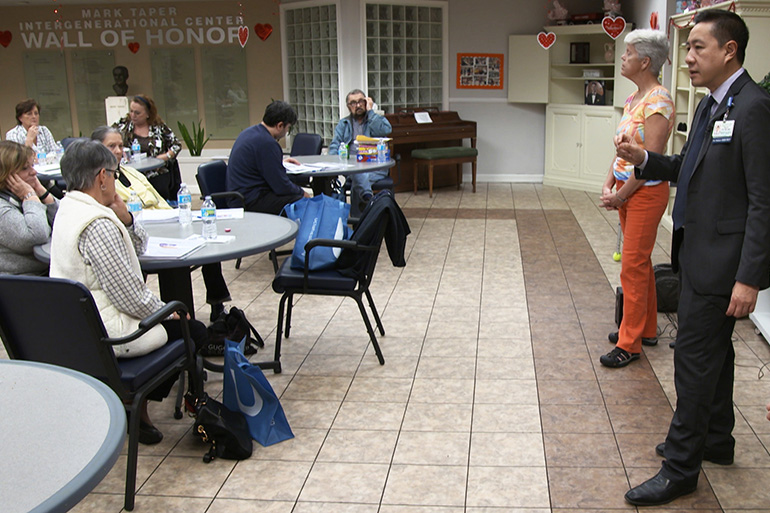 Dr. Zaldy Tan fields questions from participants at the Alzheimer’s Caregiver Boot Camp. Tan helped develop the program, which teaches skills and techniques to those who have taken on the responsibility of caring for a loved one with dementia. (Courtesy of UCLA Health)

He also warned the group that their actions can provoke anxiety or aggression in their loved ones, inadvertently.

“A lot of times, when you see someone shift from being calm to agitated, happy to angry, typically there’s a trigger,” Tan said. “A trigger is just like a trigger in a gun. You push something and then you get a reaction.” He told them that as caregivers they were in the best position to identify and avoid those triggers.

Leon Waxman, who also attended the boot camp, said he tries not to upset his wife, Phyllis. But sometimes she gets mad, as she did that day when he dropped her off for day care while he attended the session for caregivers.

Taking care of Phyllis the past few years has been trying, he said. She can still dress herself, but she gets easily confused and can no longer make decisions.

“The hardest part for me is I don’t have a wife anymore,” said Waxman, who has been married to Phyllis for 58 years. “She’s not the same person she was 10 years ago.”

During the boot camp, recreational therapist Patty Anderson demonstrated a game caregivers could play at home: music bingo. Each square had the name of a song, and she played music.

“Bye blackbird,” one yelled out.

Anderson said that even people with dementia can sometimes recognize songs and read their titles. “There’s a lot of good things that come out of this activity — just listening to music, clapping your hands, reminiscing,” she said.

In another room, occupational therapist Julie Manton explained how to prevent people with dementia from falling. She advised the group to ensure their homes have good lighting and the beds have rails, as examples. She also urged them to get rid of throw rugs.

Manton warned the participants that their loved ones might wander off and suggested the use of monitoring devices. “The key thing is to know where your loved one is at all times,” she said.