Former Los Angeles radio announcer Pat Kelley was selling real estate in 1999 when the severe backaches started. A couple of years later, he also began to suffer weakness in his foot, leading to a fall so serious his wife insisted he see a doctor. 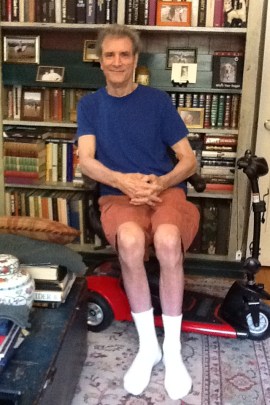 Pat Kelley, pictured here three years ago in a wheelchair, is now confined primarily to bed as his health declines. (Family photo)

The diagnosis: “primary progressive multiple sclerosis,” the rarest form of the neurological disease.

Today, Kelley, 67, retains only the limited use of his left hand.

“He’s gone from a limp to a cane to a walker to a wheelchair to now he can’t move,” said Melody Rogers, Kelley’s wife of 29 years. “He can’t sit up by himself.”

Kelley now needs 24-hour care, but the couple can’t afford it. The nearly quarter-million dollars they’ve spent on caregiving since 2012 has almost depleted their savings, the couple said. And the $4,000 they pay monthly for five hours of daily care puts a severe strain on their income from their combined Social Security checks and pensions and Rogers’ income from a part-time job.

“I don’t know how much longer I can keep working,” said Rogers, 75, a former actress who sells real estate part time to help pay for her husband’s care. “The emotional, physical, spiritual and financial strain on a caregiver is just unbelievable.”

Kelley is a plaintiff in a lawsuit filed last week by four non-profit advocacy groups seeking to provide disabled Californians and their spouses financial relief promised under the federal Medicaid Act.

The organizations are seeking class-action status for the lawsuit, alleging the state is denying assistance to more than 1,000 qualified married and disabled Californians.

The complaint, filed in Los Angeles County Superior Court, accuses the state’s Department of Health Care Services of failing to implement a Medicaid “spousal impoverishment” rule intended to keep spouses, who want to keep their disabled partner out of a nursing facility, from going broke paying for home-based care. Under federal law, the spouse of the disabled person is allowed to keep $120,900 in assets and a higher income rather than just the $3,000 Medicaid would otherwise allow a couple to keep.

When originally passed in 1988, the spousal protection law took effect only when one spouse entered a nursing home. But Congress expanded the protection so that people like Kelley, who qualify for the high level of care provided in a nursing facility, could get it at home.

But California isn’t allowing that, the lawsuit says.

California “should have implemented the [expanded] law in 2014, but it has failed to do so for the past three years, said Dipti Singh, an attorney with Bet Tzedek Legal Services in Los Angeles, one of the advocacy organizations that filed the lawsuit.

A spokesman for the Department of Health Care Services said on Friday the agency had not yet reviewed the pending lawsuit and would not comment on it.

“As the population ages, we’re going to be confronted more and more with the economic and social … need for in-home care that doesn’t bankrupt families,” Singh said. “That’s what this law was trying to do.”

According to the lawsuit, California’s failure to implement the expanded protections has caused patients and their spouses “either [to] submit to institutionalization or become impoverished.”

The petitioners are asking the court to force California to immediately apply the expanded spousal protections, to notify Californians who potentially were eligible for the protections of their rights and to reimburse them for any out-of-pocket expenses they paid that should have been free.

“It’s much more cost-effective to provide home and community-based services as opposed to institutionalized care,” Singh said. “In the case of our clients and many other individuals with disabilities … they would rather stay at home with their spouses and their families.”

Rogers, meanwhile, said she will do all she can to keep her husband out of a nursing facility, even as his disease progresses and caregiving becomes harder for her.