Civil rights advocates sued California on Wednesday, alleging that care provided by Medi-Cal, the state’s health program for low-income people, is substandard and disproportionately hurts Latinos — by far the largest group of enrollees.

The lawsuit, filed in Alameda County Superior Court by the Mexican American Legal Defense and Educational Fund (MALDEF) and the Civil Rights Education and Enforcement Center, says Medi-Cal participants have “substantially worse access to health care than their counterparts” in employer-based insurance plans or Medicare, the federal program for seniors and people with disabilities. State and federal laws require Medi-Cal to provide a level of care that is on par with that available to the general population, according to the court filing.

The two groups that filed the case hope to get it certified as a class-action lawsuit on behalf of all Medi-Cal enrollees.

The complaint claims that beneficiaries of Medi-Cal, the state’s version of the Medicaid program, often experience delays in care or are denied care altogether. And, it says, they may have to travel longer distances to find medical providers who are willing to see them.

“As a result, Medi-Cal participants suffer from greater pain, illness, and undiagnosed and untreated serious medical conditions — with significant impact to their overall health — than do their fellow Californians with other insurance,” according to the suit. The bottom line, it says, is that “California has created a separate and unequal system of health care, one for the insurance program with the largest proportion of Latinos (Medi-Cal), and one for the other principal insurance plans, whose recipients are disproportionately white.”

The Department of Health Care Services, which runs Medi-Cal and is named as a defendant in the lawsuit, said in a statement that it has “not identified any systemic problems with patient access to services in the Medi-Cal program, nor has the federal Centers for Medicare and Medicaid Services identified any issues.”

The department said it “routinely monitors access and network adequacy in the contracting Medi-Cal Managed Care Plans.” The lawsuit blames the alleged obstacles to health care access on low reimbursement rates, which it says discourages doctors from accepting Medi-Cal patients. The suit also says the state has failed to provide adequate monitoring to ensure that beneficiaries have timely access to care.

The plaintiffs do not request specific monetary damages, other than attorney fees and other legal costs. Rather, they seek systemic changes, including “adequate” pay for doctors treating Medi-Cal beneficiaries and better monitoring and enforcement to ensure patients get care when they need it.

The suit follows a federal administrative complaint filed by the same groups in December 2015 with the U.S. Department of Health and Human Services. That case did not lead to an investigation, MALDEF said. The lawsuit filed Wednesday is a different approach to address the same problem, said Thomas Saenz, the group’s president and chief lawyer. 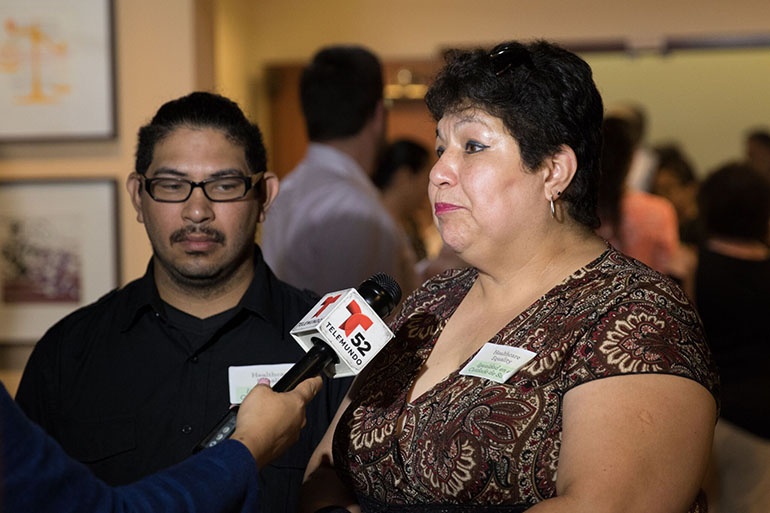 In a May 2016 letter responding to the federal complaint, California’ s Office of the Attorney General noted that current law “provides a number of remedies that provide relief if a Medi-Cal patient is denied timely access to needed care and services.” For example, they can submit a complaint to their health plan that must be resolved within 30 days, the letter said.

The attorney general’s office also said it had no evidence to show Latinos were treated differently than other Medi-Cal beneficiaries.

As of January 2017, 48 percent of California’s 13.5 million Medi-Cal beneficiaries were Latino, according to data from the Department of Health Care Services.

“This is a problem faced by all Medi-Cal patients,” Saenz said. “But it is occurring in the one insurance system where Latinos are overrepresented.”

The lawsuit names five individual plaintiffs, including a Sacramento couple — Rebecca Binsfeld, 35, and her husband, Carlos de Jesus, 43 — who said they have experienced delays in care. Binsfeld suffers from lupus and de Jesus has chronic back pain. They also have a 16-year-old daughter with scoliosis.

The family used to get primary care at UC Davis Medical Center, until their Medi-Cal managed care plan under Health Net terminated its contract with the hospital in 2015.

They sought primary care elsewhere but had difficulty finding a doctor willing to take new Medi-Cal patients, Binsfeld said. She eventually found help at a local community clinic in Sacramento, but it took 10 months for her to be seen by a rheumatologist — more than double the recommended time between such visits. And she experienced debilitating symptoms while she waited, she said.

“The first thing they tell you about lupus is that you need to avoid stress, and this was very stressful for me,” Binsfeld said. “I found myself in the ER quite a few times.” 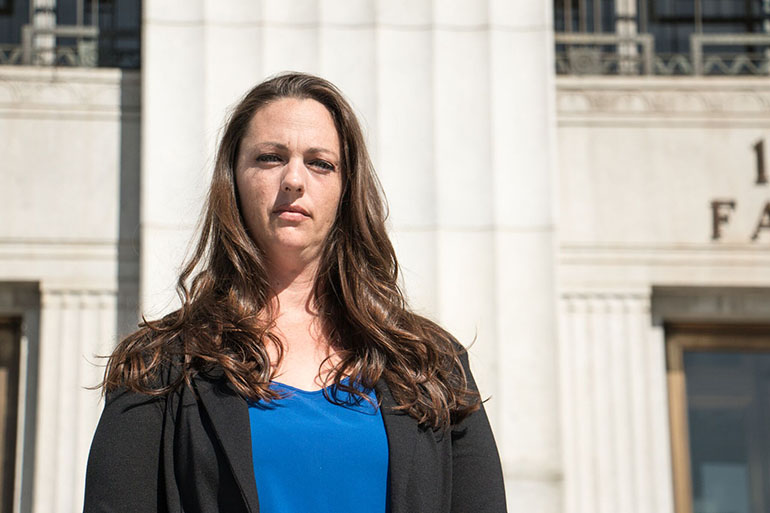 Rebecca Binsfeld, who suffers from lupus, is one of five individual plaintiffs named in the lawsuit. She and her husband, another plaintiff, say they have experienced delays in care. (Kim Rescate /SEIU-UHW)

Darin Ranahan, Binsfeld’s attorney, said the point of the lawsuit is “for the state to stop discriminating against people with Medi-Cal” and make sure that access to care is the same as for people with other types of insurance. “That means the state will need to allocate money for reimbursement rates and also remove barriers to care,” he said.

But state legislators, the medical industry and Gov. Jerry Brown wrangled over Medi-Cal rates earlier this year — and not to the entire satisfaction of doctors or patient advocates.

Last month, Brown approved a state budget that sets aside $465 million of tobacco tax money to boost Medi-Cal payments for doctors and dentists. That’s about one-third of the $1.2 billion the tax is expected to raise in its first year. Health care advocates and doctors had initially hoped that entire amount would be used to raise providers’ pay, and during the debate over the budget they argued that voters had approved the tax last November with the same idea in mind.

MALDEF’s Saenz said the amount ultimately allocated is “not going to make much of a dent in the problem.” 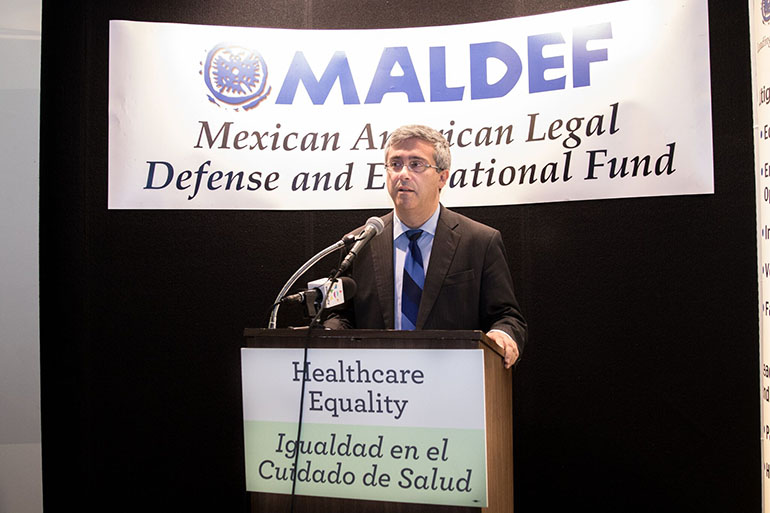 Tom Saenz, MALDEF president and chief lawyer, speaks at a press conference in Los Angeles on July 12. (Courtesy of SEIU-UHW)

Saenz said that while boosting Medi-Cal provider rates is an essential part of improving access to care for Medi-Cal patients, it is not the entire solution. There are also systemic and administrative hurdles to overcome, he said. They include long application processing times and the challenge of ensuring that physicians and specialists have the capacity to see new patients, he said.

There is also a big question mark hanging over the whole Medi-Cal program, given efforts in Congress to cut Medicaid funding and roll back the program’s expansion under Obamacare. Saenz said that it is difficult at this point to assess how such changes would affect California’s ability to improve access and quality of care for its Medi-Cal population.