When Jessy Rosales was a sophomore at the University of California-Riverside, she had a boyfriend and was taking birth control pills. Then, out of nowhere, she started feeling sick.

“I just thought it was the stomach flu,” she said. “It turns out I was pregnant.”

Rosales was sure she was not ready to have a baby. She wanted a medication abortion that would involve taking one pill at a health clinic, and a second one at home a day or two later to induce a miscarriage.

“I just wanted the intimacy of dealing with it on my own, in the privacy of my own home,” she said. “And being able to cry if I wanted to cry or just being able to curl up in my bed right away.”

Public university health centers in California do not perform abortions. But state lawmakers are expected to pass a bill in the coming weeks that would require health centers at all 32 state campuses to provide medication abortions. If the bill becomes law, it would be the first of its kind in the nation.

The bill’s supporters say they want to remove the obstacles women face accessing medical abortion off campus. For example, Rosales was given three off-campus referrals for abortion providers by her student health center. The first clinic she called didn’t do abortions after all. The second didn’t take her insurance.

By the time she could get an appointment at a third clinic, she was into the second trimester of pregnancy — too late for a medication abortion, which can be done only up to the 10th week. Rosales ended up having a surgical procedure.

“The doctor kept telling me to relax, to relax, and I couldn’t because it just hurt so bad,” she remembered. “I was just afraid and alone.”

Rosales graduated last year and is now advocating for the bill (SB-24), as a reproductive justice activist with the Women’s Foundation of California. She wants other students to have easier access to the abortion pill than she did.

Opponents have organized several rallies against the bill. In August, about 60 protesters in yellow T-shirts gathered outside a church in Sacramento, their heads bowed as a priest led them in prayer, then marched around the state Capitol, chanting “Don’t kill babies! Don’t kill babies!” 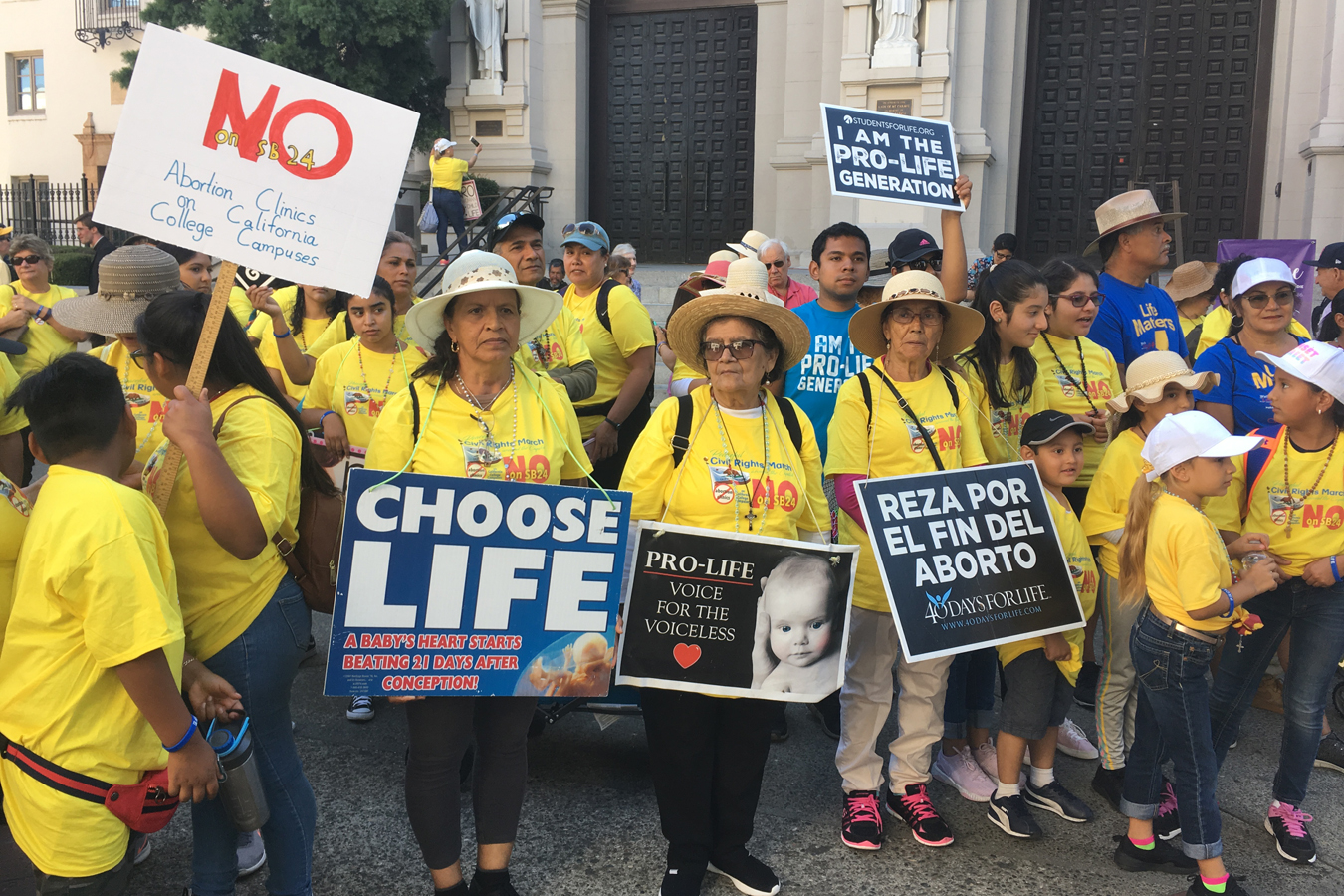 Anti-abortion protesters gather outside a church in Sacramento, Calif., on Aug. 13 to sound their opposition to legislation that would make medication abortions available on public university campuses.(April Dembosky/KQED)

While a consortium of women’s groups that support abortion rights have promised to pay for the required ultrasound equipment and upfront training costs of providing the abortion pill on campus, eventually universities would likely need to dip into tax dollars or student fees for ongoing costs. Abortion opponents like Michele LaMonica object to that.

Insurers are required to cover abortion under California law, and state tax dollars do go toward abortions provided through Medi-Cal, the state and federal Medicaid program for low-income patients. Currently, none of the University of California campuses and only some of the California State University campuses get reimbursed for health services through Medi-Cal. University officials testified during legislative hearings on the same bill last year that it could be an administrative and fiscal burden to establish billing systems to provide the abortion pill on campus. They predicted that some clinical costs, as well as security and liability costs, could fall directly on the universities and get passed on to students.

As many as 519 women at public universities seek a medication abortion every month in California, according to a study published in the Journal of Adolescent Health last year. The same research found that off-campus abortion providers were an average of 6 miles away from public university campuses in California.

Former Gov. Jerry Brown cited this stat when he vetoed a version of the bill (SB-320) last year, saying the legislation was not necessary.

“Six miles away — that’s like a $5 Uber ride,” said abortion opponent Nick Reynosa, the Northern California coordinator for Students for Life of America. He said the campaign is more about politics than need. In his view, abortion rights proponents are trying to counteract the wins abortion opponents have had in Republican-led states in recent years.

The bill’s supporters don’t deny it. Phoebe Abramowitz was part of the student team that launched the campus campaign for medication abortions at UC-Berkeley four years ago.

“Now that we’re doing statewide advocacy, we’re hoping to set a national precedent that we can, even in these really hostile times to women and queer people, move access to abortion forward,” she said. “It’s more important now than it even was a year ago.”

Last year, when Gov. Brown vetoed the bill, then-gubernatorial candidate Gavin Newsom said he would have supported it. Now that Newsom is governor, advocates are optimistic he will side with them this time around.