California voters will weigh in this November on a high-stakes ballot proposition intended to help control the cost of prescription drugs – the latest attempt to limit soaring prices that have prompted public criticism nationwide.

The proposition would require the state to drive a harder bargain with drug companies so it doesn’t pay more for medications than the U.S. Department of Veterans Affairs.

The initiative would affect about 5 million people whose health care is covered by the state, proponents said. They include retired state workers, inmates and some low-income residents in the Medi-Cal insurance program.

Across the nation, prices have spawned state legislative proposals as well as federal hearings and task forces. Dozens of bills have been proposed to address the high cost of specialty drugs, according to the National Conference of State Legislatures.

Political leaders in Virginia and New Jersey have introduced legislation that would require manufacturers to report production costs of some high-priced drugs. A bill in New Mexico would create a task force on pharmaceutical pricing, while a proposed law in Washington state would cap consumers’ out-of-pocket spending on prescription medications.

Among the catalysts for public outrage are the sky-high price of treatments for diseases such as hepatitis C and the unapologetic markups for specialty drugs by former pharmaceutical executive Martin Shkreli.

“It’s a universal issue,” said Geoffrey Joyce, a professor and director at the USC Schaeffer Center for Health Policy & Economics. “How do we control these prices and at the same time not dampen incentives to innovate?”

Limiting prices could bolster state budgets in the short-term but might diminish the drug companies’ incentive to create future drugs, he said. 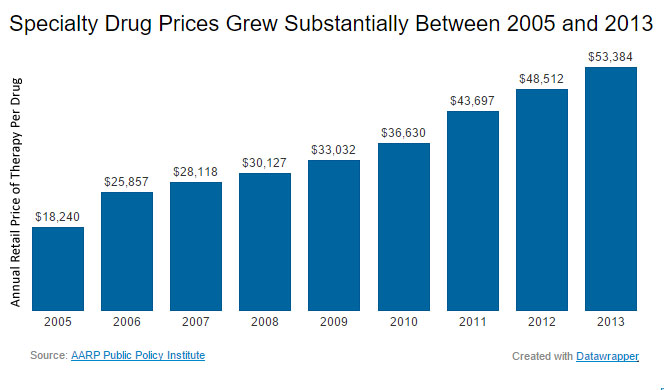 The California ballot measure is sponsored by the AIDS Healthcare Foundation, a Los Angeles-based organization that provides HIV and AIDS care around the world. “Everybody is angry about drug prices,” said Michael Weinstein, president of the group, which has proposed a similar initiative in Ohio. “When is enough enough?”

Pharmaceutical Research and Manufacturers of America (PhRMA), the chief opponent of the measure, says it is misleading and would “negatively impact millions” of Californians by causing drug prices to rise.

Kathy Fairbanks, spokeswoman for the opponents, said price controls for one segment of the population would only shift the cost to others. “It’s not going to help veterans, families, kids,” she said.

Recent polling by the Kaiser Family Foundation showed that 77 percent of Americans believe making medications affordable to people with chronic conditions is a top health care priority for politicians. And 72 percent said drug costs are unreasonable. (Kaiser Health News is an editorially independent program of the foundation.)

The California initiative is being closely watched, as states cope with high-cost specialty drugs and drug manufacturers fear a potential precedent in a bellwether state.

The pharmaceutical industry is already outspending advocates of the initiative by a large margin. With the election more than nine months away, several companies have contributed a total of nearly $39 million to defeat the proposition. Pfizer and Johnson & Johnson, among the biggest contributors, have donated almost $6 million each.

By contrast, proponents have raised only about $4 million, according to the Secretary of State’s office, which announced in December that the initiative had qualified for the ballot.

Though support for the proposition has been led by the AIDS Healthcare Foundation up to this point, Weinstein said he plans to reach out to other groups. “We have the people on our side and the political mood could not be better,” he said. “This is the beginning of real reform in drug pricing.”

Similarly, Fairbanks said the opposition campaign plans to contact veterans, patient advocates and businesses. “We expect to have a broad coalition in the near future,” she said.

The measure would exclude the vast majority of Medi-Cal beneficiaries, who are in managed care plans that negotiate their own prices. It also would not affect people on Medicare, with employer-sponsored coverage, or who those purchase private plans on the open market or through Covered California, the state’s insurance exchange. 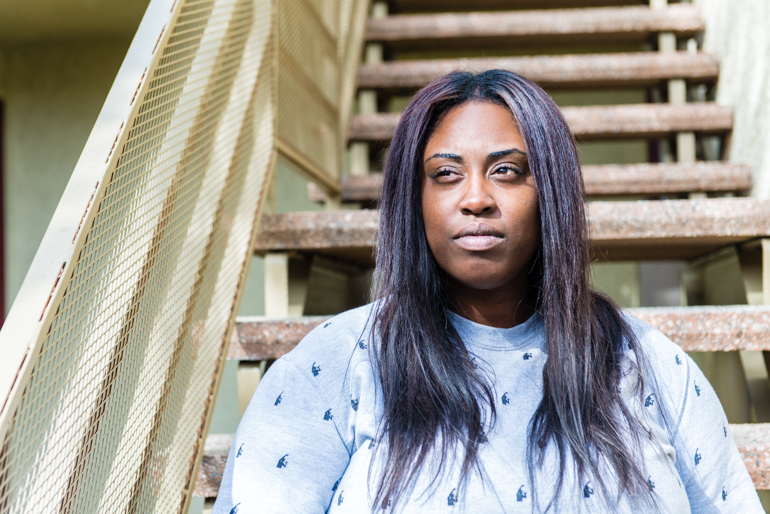 Whatley at her apartment in Sylmar, Calif., on Friday, January 22, 2016. Whatley, an unemployed teacher, says it’s a good idea for drug prices to be regulated. (Heidi de Marco/KHN)

The state Legislative Analyst’s Office has not yet been able to conduct a fiscal analysis of the measure because some of the price data is not publicly available and it’s impossible to know how drug manufacturers would respond to caps, said Amber Didier, an analyst in the nonpartisan state office.

The lack of public information on prices could make enforcement of the initiative impossible, Fairbanks argued.

For people covered by state programs, the costs of specialty drugs largely fall to taxpayers rather than individual consumers. But some Medi-Cal recipients still support curbing prices.

Chaz Whatley, 31, said medication she takes for bipolar disorder costs about $550 a month and Medi-Cal covers all but $1. Whatley, an unemployed teacher in Los Angeles, worries that if her drugs become more expensive, Medi-Cal won’t pay and her doctor may have to prescribe something less effective.

“It’s a great idea to regulate the prices in some sort of way,” she said. “Otherwise, it’s just making the pharmaceutical companies really rich.”

Consumers in the private market already have some new protections from high out-of-pocket drug costs.

Beginning this year, most people with plans through Covered California, the state insurance exchange, won’t have to pay more than $250 a month per prescription. The exchange is the first in the nation to set caps on co-pays. And Gov. Jerry Brown signed a law late last year with similar effect for other privately insured residents who take expensive drugs for cancer, epilepsy and other diseases. That law takes effect in 2017.

San Diego resident Maggie Crine said she hopes there will be more such relief for patients in the future. She takes care of her mother, who has private insurance and pays over $200 a month for medications to treat chronic lung disease and high blood pressure. “We struggle to pay,” she said. “Where is the money going?”

Attempts by California state legislators to impose more transparency on pharmaceutical companies haven’t gotten much traction. Assembly member David Chiu (D-San Francisco) withdrew a bill this month that would have required drug manufacturers to publicly report profits and costs of production, marketing and advertising on any drug priced at more than $10,000 annually.

Anthony Wright, executive director of the consumer group Health Access, said he sponsored a ballot measure in 2005 that would have pressured pharmaceutical companies to reduce drug prices for low-income Californians, but it was defeated after the companies spent tens of millions of dollars to oppose it, Wright said.

It started as a “low roar,” she said. “Now it’s just deafening.”

California Voters Will Have Their Say On Drug Prices