The failure of a University of Washington clinic to inform a pregnant woman in a timely fashion that she had tested positive for Zika is adding to concerns about how tests for the illness are tracked and the potential consequences of delayed or inaccurate results.

Andrea Pardo, 33, of Issaquah, Wash., was tested for the virus in October after becoming pregnant while she was living in Mexico. The results were ready last December, but the clinic did not notify Pardo until April — 37 weeks into her pregnancy, just before she delivered her daughter, Noemi.

Zika can cause devastating birth defects, though Pardo’s baby appears healthy so far. But the delay, blamed on a mistake at the clinic where Pardo received care, deprived her of the chance to make an informed choice about her pregnancy, she said.

There have been other reports of botched or delayed tests in the U.S. since the Zika outbreak began in Brazil in 2015, health officials said.

In February, nearly 300 Zika tests for pregnant women conducted by the public health laboratory of Washington, D.C.’s Department of Forensic Sciences had to be repeated after the discovery that technicians had skipped a necessary step, causing all results to be negative. One pregnant woman later tested positive for the virus, and another 25 pregnant women had inconclusive results, said LaShon Beamon, a spokeswoman for the department.

Dr. Kelly Wroblewski, director of infectious diseases for the Association of Public Health Laboratories, said she has heard of several recent cases in which patients did not receive Zika test results promptly, though “it’s not the norm.”

“The reports aren’t getting to the right clinicians,” she said. “Where and how that breakdown is happening, I can’t say from where I sit.”

Health officials in the U.S. and beyond have conducted hundreds of thousands of tests as Zika spreads. The CDC alone has sent out 400,000 tests in U.S. states and territories and more than 700,000 worldwide, spokesman Tom Skinner said.

In California, officials have conducted tests to detect Zika on nearly 16,000 samples since January 2016. At least 561 people have tested positive for the virus in the state, including 131 pregnant women. Six women have delivered infants with Zika-related birth defects, health officials reported.

In May, officials with the Centers for Disease Control and Prevention expanded recommendations for Zika testing to include not only pregnant women who might have been exposed to the virus but women with risk factors who are thinking of becoming pregnant.

The Zika virus, which can be passed from a pregnant woman to her fetus, can cause potentially severe birth defects, including microcephaly, characterized by a small head, as well as vision and hearing problems, and developmental delays. After news that the virus was spreading in Latin America, requests for abortions spiked, researchers found.

Pardo said she probably wouldn’t have terminated her pregnancy had she known earlier that she was infected with Zika — but she would have wanted accurate information.

Dellit said clinic staff knew that Pardo had been exposed to Zika and cared for her appropriately. Officials have revamped the test protocols, double-checking that results from outside labs make it into medical files and are communicated to patients, he added.

Pardo traveled to Las Guacamayas, Mexico, last June to be with her husband, Hector Pardo, 28. He originally came to the U.S. as a teenager without documentation and had to leave the country while his immigration status was resolved. He returned to Washington state in December and now works for a furniture company.

Andrea Pardo is on maternity leave from her job as an academic counselor in the University of Washington’s microbiology department. The couple also have a 3-year-old daughter. 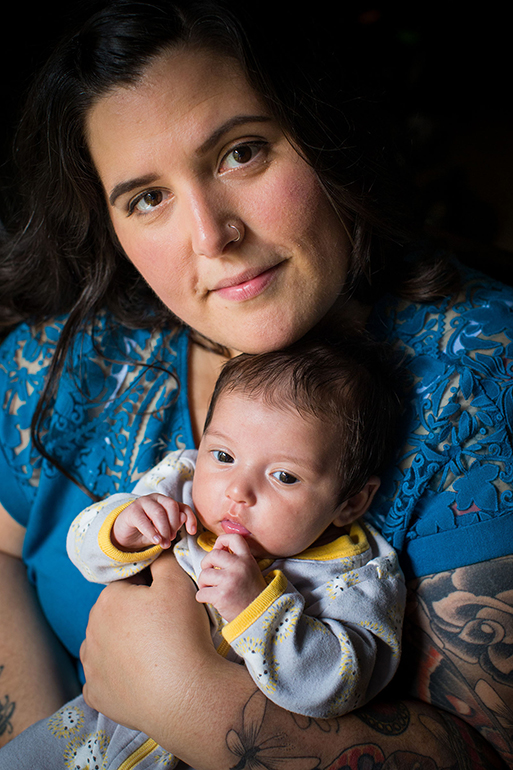 Andrea became pregnant last August. At the same time, she developed what she thought was a heat rash and other symptoms of illness, but a doctor there downplayed any risk of Zika infection, she said.

It’s a stealthy virus; 4 out of 5 people never know they’re infected, while others might show mild symptoms, such as fever, rash, joint pain, muscle aches and red eyes. The effects in unborn fetuses, however, can be devastating, experts say.

A blood test in Mexico was negative for Zika. Pardo returned to the U.S., when she was 16 weeks pregnant, and tested positive for dengue, which, like Zika, is a flavivirus. Because the two viruses can cross-react in tests, doctors couldn’t tell for sure whether she had a Zika infection, too.

Pardo’s samples were sent for additional tests, which were processed promptly by the state health department and by a CDC-approved laboratory in Minnesota. But the results weren’t sent to Pardo.

She learned of the results only when she received a letter in late April from UW scientists recruiting patients with Zika for a research trial. It said she had tested positive for Zika.

“I thought I was negative,” she said. “I was really upset about it. How dare they give me a diagnosis that wasn’t true?”

Pardo pressed her doctor for answers — and learned then she was presumed infected.

She took her baby to Seattle Children’s Hospital, where Noemi was seen by experts in microcephaly.

Dr. Hannah Tully, a pediatric neurologist, confirmed that the baby appears healthy, with no sign of a Zika infection.

But Pardo said she’s haunted by the positive results of her test. She worries her daughter could still develop problems — one of the many unknowns of the Zika scourge.

“It was shocking just because I didn’t know how to advocate for my baby,” she said. “Thankfully, she was developing normally, but even without microcephaly, they don’t really know.”