Ana Magaña has struggled with schizophrenia for more than 30 years, and she even landed in the hospital a couple of years ago after she stopped taking her medications.

When the Woodlake resident was discharged, she received additional support.

But she didn’t get it by traveling 15 miles to the closest county mental health clinic, in Visalia. The clinic came to her.

The RVs hit the streets in 2007, funded by Proposition 63, known as the Mental Health Services Act, which was adopted by California voters in 2004. The measure funded an expansion of mental health services by imposing a 1 percent tax on personal income over $1 million.

The RVs serve about 250 Tulare County residents every year and have helped more than 3,500 since they debuted, said Dr. Timothy Durick, the county’s mental health services director.

Mental health care on wheels is rare among local health departments. But the trend is growing in California as more counties receive state money to deploy such vehicles in hard-to-reach places.

Riverside started sending three RVs in 2013 to elementary schools in rural areas. They provide parent-child therapy, among other mental health services. In May, San Diego County got an $8.8 million grant through the Mental Health Services Act to use two mobile units on isolated Native American reservations.

Kirsten Barlow, the executive director of the County Behavioral Health Directors Association of California, thinks the practice may become more common in the future.

“Using a van or RV to deliver care is a growing trend [among] many types of health care providers to make services as accessible as possible,” she said.

In the poor Central Valley county of Tulare, many residents live in the foothills or rural farming communities far from urban centers, with limited access to transportation, said Tammie Weyker-Adkins, a spokeswoman for the county’s health and human services agency.

“We go out to those communities because we feel that it’s extremely important to serve those populations, no matter their status,” she said. 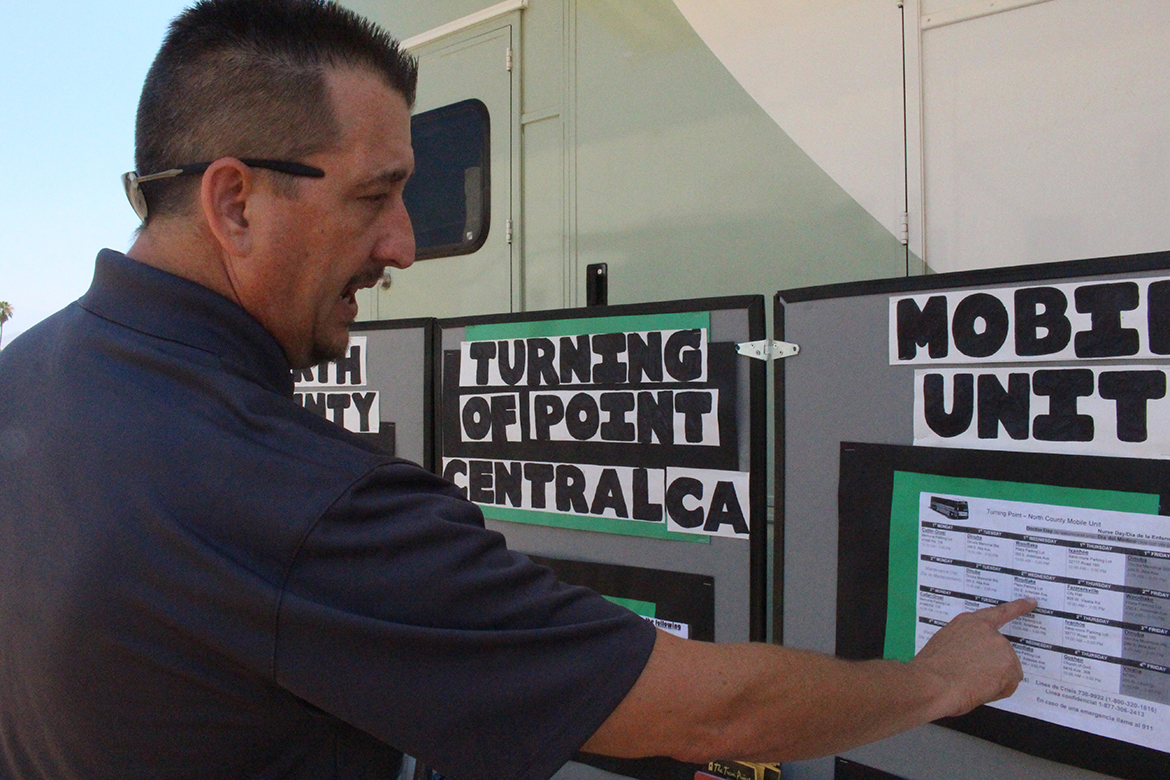 The county contracts with nonprofit organizations to staff the RVs, which are unassuming on the exterior but look like doctors’ offices inside. They usually travel to patients’ homes or community centers in small towns.

Inside, people with serious mental illnesses such as schizophrenia and post-traumatic stress disorder can get individual or group therapy, case management and job training — in Spanish and English.

To be eligible, patients must be uninsured or have Medi-Cal, the state’s version of the federal Medicaid program for low-income people.

If residents in such circumstances had to pay for transportation, they wouldn’t go to their appointments, Durick said. “Food, clothing, shelter are going to come before going to a doctor’s visit,” he said.

County officials believe the program is working: In the past year, 3.4 percent of the mobile unit patients were hospitalized, compared with 9.6 percent of all mental health clinic patients in the county, Weyker-Adkins said.

When Magaña visited the RV, parked outside a nearby community resource center, a doctor prescribed her new medication, educated her about her condition and referred her to a support group for patients with mental illnesses.

Magaña does not know how to drive, and her two knee surgeries make it difficult to walk.

So, since her initial appointment inside the RV, her nurse, therapist and case manager have monitored her progress at home, usually driving a car there.

“I feel very spoiled because they come to my house and see me,” Magaña said through a Spanish-language translator.

She reports that her medication is working. “I feel much better, I feel animated,” she said.

Laurie Cano, a peer advocate for Kings View, one of the private contractors that runs the RVs for Tulare County, was homeless and addicted to drugs when friends from church told her about the mobile units in 2009. She called, and met one just off the freeway.

“The van itself [is] a blessing, especially for individuals that didn’t have nothing. They’re scared of everybody,” said Cano, 50. The staff “didn’t crowd me, they didn’t push me up against the wall, they didn’t make me feel unwelcome or anything like that.”

Cano said she felt comfortable sharing her story and was referred to a drug and alcohol recovery program. Kings View paid for food, clothes and a place for her to stay.

She now rents a house in Tulare and is raising grandchildren. She’s been drug-free for more than seven years.

“During my whole addiction time, I lost everything. I hit rock bottom,” Cano said. “I got all that back. It took time, but it does happen.”

In Riverside County, about 100 families have received parent-child therapy in mobile units over the past year, according to Janine Moore, a county mental health services administrator.

Moore said her department has identified high-poverty, rural areas with “less access to services” and sends the RVs to schools in those locations.

Families with children exhibiting disruptive behavior can receive therapy in RVs parked outside the schools, which helps kids address that behavior and function better, Moore said.

San Diego County, which looked to Tulare as the inspiration for its mobile mental health program for Native Americans, will debut its two RVs in January, said county behavioral health director Alfredo Aguirre.

He expects them to provide mental health assessments for at least 600 people a year, and about 120 of them will receive ongoing treatment.

The units will offer psychiatric help, prescriptions, case management and counseling to Native Americans. The suicide rate among Native Americans between the ages of 15 to 34 — 19.5 per 100,000 people — is 1.5 times higher than the national average for that age group, according to the Centers for Disease Control and Prevention.

“We’ve known for a long time that our individuals with more serious disorders … have trouble accessing our providers,” he said. “A lot of that has to do with regional isolation.”

Correction: This story was updated on Aug. 14 to correct the spelling of Laurie Cano’s last name.