CHULA VISTA, Calif. — Norma Diaz and her husband, Joseph Garcia, have dedicated their careers to running a nonprofit health insurer that covers some of California’s neediest residents.

And in the process, they’ve made millions of dollars.

Together, Diaz and Garcia made $1.1 million in 2016 and received more than $5 million since 2012, according to the health plan’s tax returns and company data. Diaz’s compensation as CEO exceeded the pay of several peers at bigger plans in 2016.

Garcia, married to Diaz since 1997, is an outside consultant who serves as chief operating officer. Their health plan, with $1.2 billion in annual revenue, had a profit margin of 19 percent in 2016, the highest of any Medicaid insurer in California and more than six times the industry average.

“This is not only a conflict of interest but egregious overpayments,” Frank Glassner, chief executive of Veritas Executive Compensation Consultants in San Francisco, said after hearing of the payments from a reporter and reviewing the tax returns. “It’s the family-and-friends plan.”

The arrangement at this midsize California health plan raises broader questions about government oversight as states award billions of dollars in public money to private plans to cover patients on Medicaid, the federal-state insurance program for the poor.

Evidence is mounting that Medicaid’s rapid expansion under the Affordable Care Act has far outstripped the government’s ability to monitor the taxpayer money it turns over to insurers. In California, for instance, some health plans have reaped outsize profits, so large the state is now trying to claw back billions in overpayments, a recent Kaiser Health News investigation found.

Medicaid enrollment has soared to 74 million Americans, from 58 million before the ACA rollout. About 75 percent of them are assigned to plans like Community Health Group, which receive a flat monthly fee per person to handle their medical care.

Increasingly, states have embraced managed care in hopes of controlling Medicaid costs. Insurers could see further growth as the Trump administration and Congress seek to cut federal spending on Medicaid and shift more of the fiscal burden onto states.

These managed-care contracts can be highly lucrative for the companies involved and their executives, like Diaz and Garcia. Any money left over after spending on medical care and administration is profit or “surplus,” depending on whether the plan is nonprofit.

Federal auditors have warned for years about lax oversight of Medicaid money, a task that primarily falls to states. A 2017 report found that even as managed care has grown in importance, states have fallen behind in collecting essential data from plans.

In the past year alone, government auditors and consultants criticized Illinois, Kansas and Mississippi for poor supervision of Medicaid insurers. Illinois auditors said the state didn’t properly monitor $7.1 billion paid to Medicaid plans in fiscal year 2016, leaving the program unable to determine what percentage of money went to medical care as opposed to administrative costs or profit.

An examination of Community Health Group in California points to systemic flaws in oversight.

For instance, California officials said they do not examine the companies’ public tax filings. As a social welfare nonprofit, Community Health does not pay taxes, but it is required to file returns with the federal government, known as 990s, which provide basic information about operations and finances.

In a review of Community Health’s recent returns, KHN discovered that the company falsely denied — on the 2015 and 2016 forms — that it was doing business with a family member.

In response, the insurer immediately said that was an error and it was amending the returns to reflect its relationship with Garcia. The company had disclosed the relationship in earlier years.

California’s Medicaid agency, in a statement, said insurers are allowed to set their own conflict-of-interest policies. Asked specifically about Community Health Group, it referred further questions back to the health plan.

Likewise, the state’s chief insurance regulators at the Department of Managed Health Care said in a statement that insurers are not required to submit information on executive compensation and the state does not set standards for that. They do review the pay of outside contractors.

Diaz and Garcia, sitting together at a conference table in the CEO’s office on a recent weekday, said they were proud of their long record of helping disadvantaged people. The couple insists there’s nothing wrong with mixing work and family. 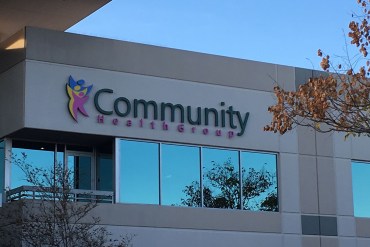 Community Health Group, with $1.2 billion in annual revenue, had a profit margin of 19 percent in 2016, the highest of any Medicaid insurer in California and more than six times the industry average. (Chad Terhune/California Healthline)

Diaz, 56, said her husband reports not to her but to a fellow executive, the associate CEO, and his consultant’s role was approved by the health plan’s board. “I don’t feel for me it’s a conflict of interest because he was here for many years long before we ever got married, so we got used to a working relationship,” she said.

Garcia, 66, served as the company’s on-staff chief operating officer for about 15 years and then switched in 2011 to the role of consultant (acting as COO), which ultimately raised his pay. He said the couple has never tried to hide their personal relationship from the state or anyone else.

“I understand from the outside someone might say ‘Oh my God. That’s a conflict.’ But it’s not. It’s irrelevant that I’m her husband,” he said. “I don’t see how it’s a misuse of public funds. The expense for a chief operating officer would be made no matter what, and my compensation is fair.”

Under his consulting agreement, Garcia is paid $275 an hour and can make as much as $572,000 annually, according to documents obtained by KHN through a public records request. The health plan had requested the information be kept confidential, but the state released it.

In September, regulators at the managed-care department asked Community Health Group how Garcia’s pay was determined. The company submitted a pay range for chief operating officers that it said was drawn from industry surveys.

Community Health said it picked the maximum figure in the range, $442,863, to reflect Garcia’s “many years of experience in health plan operations.” It then increased his pay range by 30 percent because it said Garcia doesn’t receive benefits. The plan called his current salary — which in 2016 fell below the maximum allowed — “both fair and competitive.”

An agency spokesman said the state’s review of the matter is closed.

In early 2012, the insurer hired a new executive as COO, but he left the following year. Garcia stayed on as a consultant during that time at roughly $400,000 annually, then resumed his COO duties. His current consulting agreement runs through 2021.

“We don’t want to lose Joseph. He has a tremendous amount of knowledge,” said Albert Vitela, a retired San Diego police detective who is the plan’s co-founder and chairman.

As for Diaz, she has received $2.8 million in salary, benefits and other compensation over the five years ending in 2016. Her 2016 pay of $604,502 exceeded that of the CEO of the Inland Empire Health Plan in Southern California, which has four times the enrollment.

Last year, federal auditors examined compensation for the 133 top paid executives at managed-care organizations in seven states, focused on health plans that get more than half of their revenue from Medicaid.

For 2015, the top executives earned $314,278, on average — more than double what state Medicaid directors earned, according to the report. Auditors didn’t find major differences in pay between for-profit and nonprofit Medicaid plans.

State officials had raised the rates paid to Medicaid plans in anticipation of the Affordable Care Act rollout in 2014, but the costs for newly insured patients weren’t as high as predicted. After the KHN investigation into insurer profits published in November, California’s Medicaid director, Jennifer Kent, vowed to recoup billions of dollars in excessive payments from insurers in coming months.

From 2014 to 2016, Community Health Group recorded profits of $344.2 million, according to state data obtained and analyzed by Kaiser Health News. Diaz said her insurer expects to return more than $100 million to the Medicaid program.

Robert Stern, a government ethics expert and former general counsel of California’s Fair Political Practices Commission, welcomed the scrutiny of Medicaid profits. But he said the business practices at Community Health Group suggest there is much more to be done.

“Taxpayer money should be spent as wisely as possible,” Stern said. “It’s not their money. It’s our money.”

Do you have a Medicaid managed care story? Contact Senior Correspondent Chad Terhune at cterhune@kff.org or via Signal at 657-226-0625