Last fall, a bladder condition forced Carmen Anguiano to leave her job at a packing shed in Salinas, a farming community off California’s Central Coast.

She had to give up her employer’s health insurance at a time when she needed it most. So Anguiano, who is 60, bought a health plan through Covered California, the state’s health insurance exchange. She liked the coverage, which she and her farmworker husband could afford because of government subsidies.

Now, with Covered California announcing its rate increases for next year, Anguiano and others in her region face the steepest price hikes in the state. Even though Anguiano qualifies for subsidies, she’s not sure if she’ll be able to afford her plan next year.

“I am willing to pay a little more, as long as I can afford it,” Anguiano said. “But it does worry me, especially if [premiums] continue to rise this much every year.” 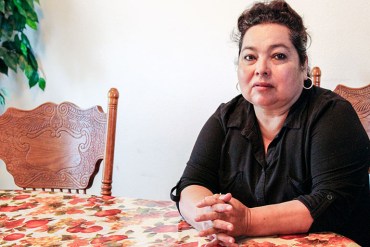 Carmen Anguiano, 60, in her home in Salinas, Calif. on July 22, 2016. She worries that her monthly premium for next year might put more financial pressure on her family. She lives in the three-county region that will see the highest average premium increase in 2017. (Ana Ibarra/California Healthline)

Covered California’s 13.2 percent average premium hike for 2017, announced two weeks ago, would concern any consumer. But people like Anguiano, who live in the region made up of Monterey, Santa Cruz and San Benito counties, face increases of up to 28.6 percent, by far the largest among the exchange’s 19 pricing regions.

More than 32,000 people in that region signed up for or renewed Covered California health plans during the last enrollment period in 2015. Insurance companies and Covered California officials say it is simply more expensive to provide care in the coastal region, where medical providers face less competition and charge more for their services.

“Historically, this region is among the most expensive when it comes to health care. This predates the ACA,” said James Scullary, a Covered California spokesman.

“This area is somewhat of an island in the sense that it is not as easy for people to access care,” said Erin Trish, an assistant research professor at the University of Southern California’s Leonard D. Schaeffer Center for Health Policy and Economics. “There are a limited number of providers, and providers know they can charge higher prices because they have less competition.”

Another factor, said Scullary, is that managed care, which tends to contain health spending, does not predominate in the region.

Covered California officials noted that while monthly premiums will rise, so will the income-based subsidies that about 90 percent of exchange enrollees receive. Covered California will encourage consumers to shop around for a different plan, which can help mitigate the impact of rising costs, Scullary said.

In Salinas, Anguiano currently pays Anthem $38 monthly for a heavily subsidized silver-tier plan — the second-cheapest level of coverage — that would otherwise cost her $895 per month.

But Anguiano finds it hard to follow all the details of Covered California’s 2017 rate increases as her insurance agent explains the possible expenses she’ll face when open enrollment starts Nov. 1.

What Anguiano does understand is that higher health care costs mean more financial stress for her and her husband. Added to a mortgage and other rising expenses, any little increase is tough, she said.

Because Anguiano takes medication for high blood pressure and visits her doctor regularly, canceling her health insurance is not an option, she said. Maybe another $20 or $30 a month is doable, but she hasn’t thought much beyond that point, she said.

This year’s average premium increases on the state exchange are more than triple the 4 percent average increase Californians have seen in the past two years. What each person ends up paying, however, depends on their income, the insurer and coverage level they choose, and where they live.

In Monterey County, where the median household income is approximately $58,500 — slightly less than the state as a whole — the nearly 30 percent insurance premium hikes seem unwarranted, some residents say. The rate hikes are even more challenging for residents of Salinas, the county seat, whose annual median household income is about $10,000 less than that, according to the latest U.S. Census data.

Carmen Anguiano’s son, Refugio Anguiano, who also signed up for coverage through Covered California, earns less than $30,000 a year selling life insurance. He pays $83 a month for a subsidized, silver-tier Anthem plan. He said it is unclear to the average consumer like him why his region faces higher health care costs.

Insurance companies say they now have more complete data on the Covered California market since it was launched in 2014 and have realized that their moderate rate increases of the past two years were too low to cover their costs.

Officials at Anthem Blue Cross said its rates across California are rising because of increased costs for medical therapies and prescription drugs. The company plans to increase premiums by an average of 17.2 percent statewide and by an average of 31 percent in the pricing region where the Anguianos live. Anthem Inc. covers 64 percent of Covered California enrollees in that area.

Blue Shield of California will increase premiums an average of 24.3 percent on the Central Coast compared with about 20 percent statewide. It covers most of the remaining Covered California enrollees in that region who are not signed up with Anthem.

CHOMP officials said they were “disappointed” to hear Blue Shield was singling them out, especially because they have been working closely with insurance companies toward reducing costs. 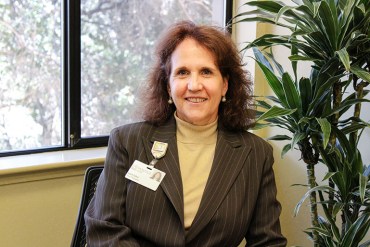 Laura Zehm, the chief financial officer at Community Hospital of the Monterey Peninsula, says the hospital, said to be a significant driver of health care costs in the region, has had significant cost reductions in recent years. (Ana Ibarra/California Healthline)

Laura Zehm, the chief financial officer at CHOMP, said the hospital has not been able to raise its rates for Blue Shield enrollees by more than 5 percent the past two years under the terms of its contract with the insurer.

Zehm noted that the hospital actually reduced imaging costs by 35 to 55 percent after physicians warned it was charging outpatients too much for those services.

According to data from the Office of Statewide Health Planning and Development, 53 percent of CHOMP’s patients last year were Medicare beneficiaries — a group that tends to be higher risk and more costly. Medicare provides coverage to people 65 and older.

“We have a lot of Medicare and Medi-Cal,” Zehm said. “Those payers pay below cost. What ends up happening is cost gets shifted to people who buy commercial insurance.”

Some people in the three-county Central Coast California pricing region may soon have more cost-saving options: Kaiser Permanente will be offering HMO plans on the exchange in Santa Cruz County next year.

In San Benito and Monterey counties, Anthem and Blue Shield will continue to dominate the marketplace, however. Refugio, Carmen Anguiano’s son, said that while he was satisfied with his silver Anthem plan, he would consider dropping to a bronze-level plan if his monthly premium surpasses $100.

Except for some concern about his cholesterol level, the 39-year-old considers himself healthy. He said he bought a Covered California plan primarily to avoid a tax penalty.