[UPDATE: This story, originally published Nov. 12, 2018, was revised on Dec. 20 to report the amount of money Covered California spent on the dance performances.]

SACRAMENTO, Calif. — What do hip-hop dancing and health insurance have in common?

For one, you sure do hope that the break dancer busting backflips is covered.

Beyond that, Covered California, the state’s Obamacare health insurance exchange, is betting that one will bring attention to the other.

So, on a stage designed to look like a hospital waiting room, seven dancers portraying ill and injured patients used body pops, flares and fancy footwork to show that “life can change in an instant” — the slogan for this year’s Covered California marketing campaign.

The three-minute hip-hop routine, performed by local dance crew RS Sacramento outside the Covered California headquarters, kicked off the agency’s fourth bus tour to promote open enrollment. By the end of the first week, the bus made 23 stops in 16 cities, including Fresno, Bakersfield, Riverside and San Francisco. Local dance troops also performed in these communities.

“Why dance? Well, for millions, dance is how they stay healthy — Zumba, jazz, hip-hop — it’s universal,” said Peter Lee, Covered California’s executive director, to a crowd made up mostly of his own employees, health care advocates and a handful of reporters. 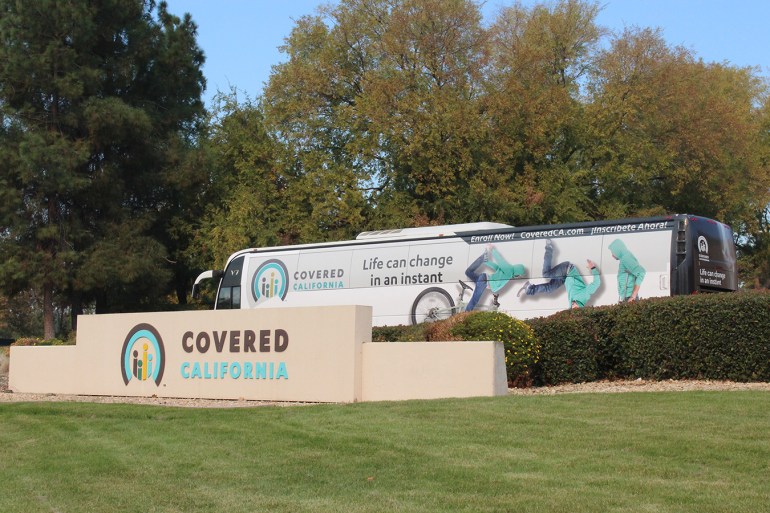 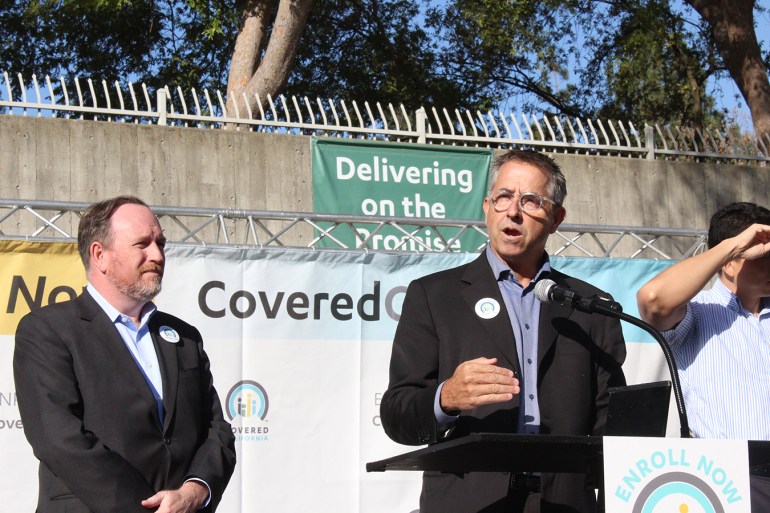 Peter Lee, Covered California’s executive director, says the goal is to bring 350,000 new consumers into the marketplace during this sign-up period. Currently, about 1.4 million people are enrolled in health plans through Covered California. (Ana B. Ibarra/California Healthline)

By targeting healthy people “that need to be harangued, nudged, prodded, more of them sign up and that lowers the cost for everybody,” Lee said later, while sitting behind a table that doubled as his desk inside the charter bus. On the side of the bus were three bigger-than-life images of a man tumbling headlong over his bicycle and ending up in crutches.

It’s all part of the agency’s considerable investment in marketing — which far exceeds the federal government’s own budget for the same purpose in the 39 states that use healthcare.gov.

Covered California said it won’t report the total bus tour costs until open enrollment ends on Jan. 15.  But in response to a California Public Records Act request from California Healthline, the agency said it paid about $133,200 for the dance performances.

Covered California is funded by fees, equal to 3.75 percent of premiums, that it levies on its health plans.

Last year, the agency spent $1.4 million its bus campaign, which included about $142,400 for 16 murals that it commissioned and unveiled across the state.

Covered California said projects like the bus tour pay for themselves because of the media attention and promotion they receive.

Yet some market experts don’t think that this much “hoopla” is needed in what is now the Affordable Care Act’s sixth open-enrollment period, when most Californians recognize the Covered California brand.

Ed Haislmaier, a senior research fellow with the conservative Heritage Foundation, chuckled when he heard about the hip-hop dancers. He said there are better ways to invest premium dollars.

“Rather than spending money on TV, floats, bus posters and what-not, maybe the way you do this is by paying the agents and giving them an incentive to beat the bushes and bring people in,” Haislmaier said.

In 2017, insurance agents brought in nearly half of the 1.2 million subsidy-eligible enrollees, a Covered California report shows.

For the open-enrollment period for 2019 plans, which started Oct. 15, Covered California is wielding a $107 million marketing and outreach budget. About $40 million of that is for paid advertising, such as TV commercials, radio spots and billboards.

Covered California’s 2018-19 ad budget is four times more than the $10 million the federal government plans to spend on advertising for healthcare.gov, just like last year.

Lee defended the robust and sometimes unconventional marketing strategies, explaining that the individual insurance market has huge turnover each year and that potential enrollees, who might not be aware of the financial aid available through the marketplace, become eligible for tax credits every day.

Some people, he added, may be considering dropping their insurance because of the elimination of the Obamacare tax penalty, which takes effect next year.

For some, the advertising works. 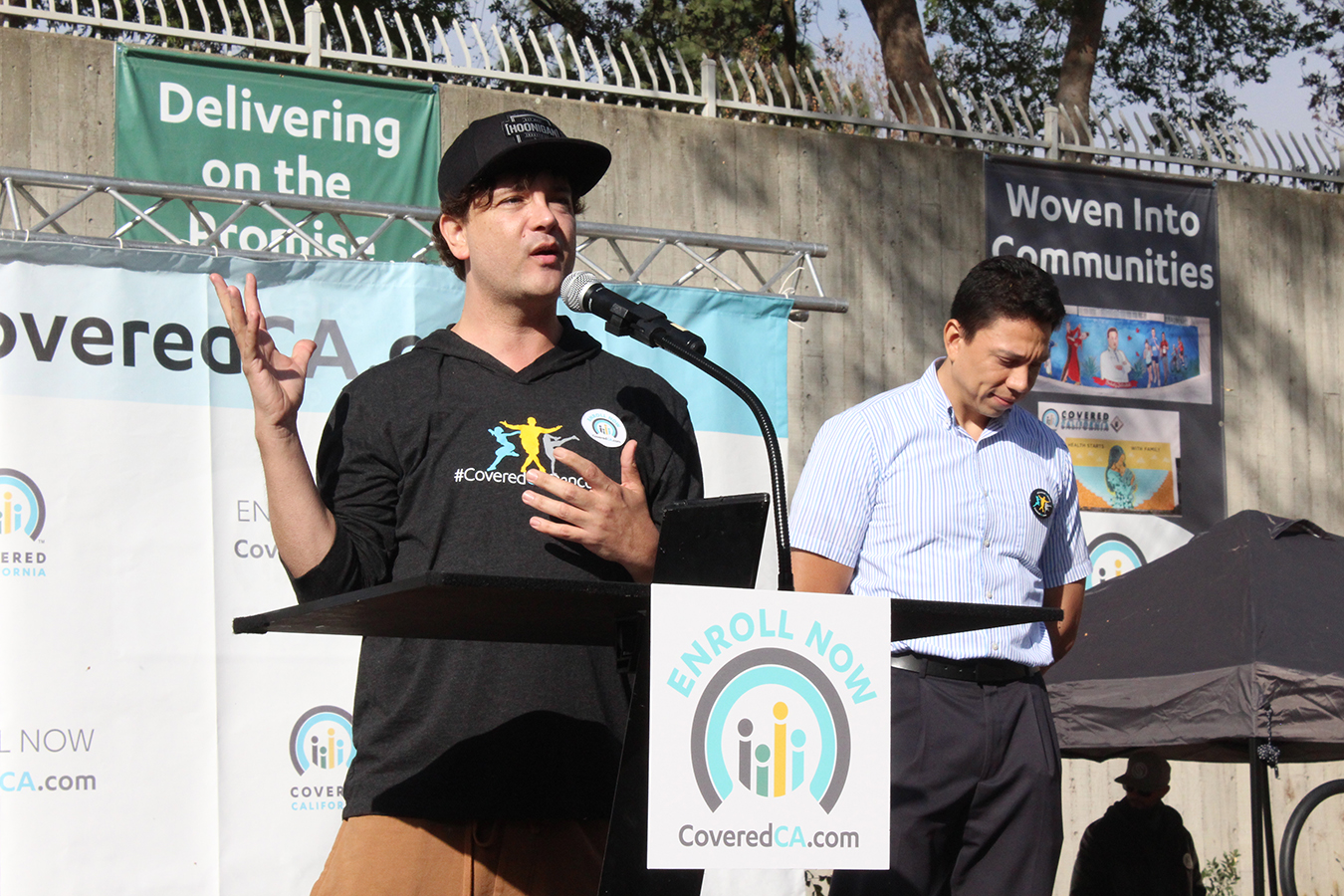 Rob Schultz, who choreographed the patient-themed dance routine, describes his experience as a Covered California enrollee. As a dancer and someone with a preexisting condition, he said he needs health insurance at all times. (Ana B. Ibarra/California Healthline)

Rob Schultz, the choreographer in charge of the opening number at the kickoff event, said he was enrolled in a Covered California plan for about a year when his income temporarily dropped and he became eligible for federal tax credits that reduced the cost of his premiums.

A friend who had seen ads told him about Covered California, he said. As a dancer and someone with pancreatitis, he needs insurance because “I can end up in the hospital at any time,” he said.

In the Sacramento performance, one young man cradled his broken arm, and another hobbled onto stage with crutches. A skateboarder stumbled and injured his neck, and a woman sneezed into her arm. There was also a lot of coughing.

Then they broke into a dance.

[UPDATE: This story, originally published Nov. 12, 2018, was revised on Dec. 20 to report the amount of money Covered California spent on the dance performances.]