“In both individual and small group, we’re building competitive markets where consumers are the winners,” Peter V. Lee, Covered California’s executive director, said Thursday. The rates for next year “demonstrate that markets are working to keep premiums under control and give consumers more choices than they’ve ever had.”

Approximately 28,000 people have insurance through Covered California’s small business marketplace. That makes it one of the largest small business health coverage programs in the country, according to officials. But it’s still dwarfed by the 1.4 million people covered in the exchange’s individual market.

In July, Covered California announced that premiums in its individual market would jump 13.2 percent on average next year — a big leap up from the 4 percent average increases Californians had seen in the exchange’s first two years.

Covered California’s small group market is available to businesses with up to 100 full-time employees. Lee said that while this market has had a slow start, without the same level of attention given to the individual market, interest is growing. 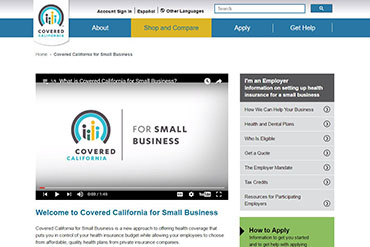 Covered California officials have seen a near doubling in the number of agents writing policies for small groups since 2014, Lee said.

Scott Hauge, president of Small Business California, an advocacy organization, said most of his group’s members don’t shop in the exchange. He said he hasn’t seen Covered California rates differ much from those in the outside market. “I think the big problem is [business owners] don’t see a reason to [go to Covered California],” Hauge said. “There hasn’t been good marketing around why someone should.”

In a 2015 Small Business California survey, only 43 percent of the nearly 700 small-business owners queried said they provided health insurance to employees, and only 11 percent of those said they had researched the exchange’s small business options.

Lee said that with the expiration of federal insurer protection programs pushing up 2017 rates in the individual market, “the relatively low increase for small business helps focus attention on what stability can look like.”

The latest installment in CHCF’s Medi-Cal Explained series explains the procurement process and what it means for the future of Medi-Cal managed care and the millions of Californians it serves.