She’s been on dialysis for 10 years and has received treatment at several different centers. She left the first because she saw roaches. At others, she often spied blood stains and cookie crumbs on chairs and on the ground, she said.

“Infections are a great concern for people with wounds,” said Foster, 60, a Northridge, Calif., resident who addressed a lively crowd outside the First African Methodist Episcopal Church Thursday.

About 60 people had gathered on the front lawn of the church to rally against what they consider unsafe and unsanitary conditions at many dialysis clinics.

Foster, who is tall, thin and strong-willed, has become a leading voice in a movement that is demanding dialysis clinics improve patient care. 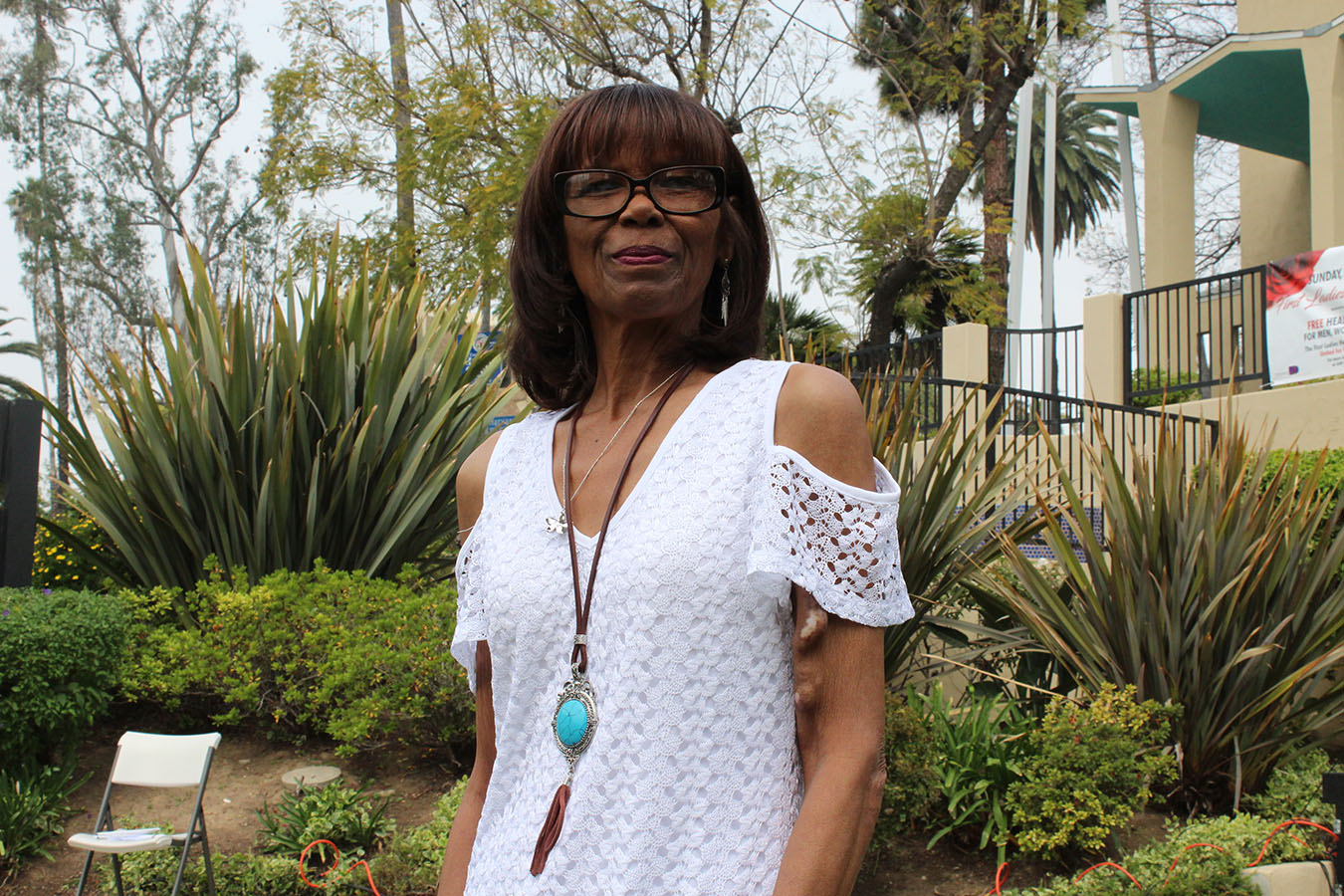 Tangi Foster of Northridge has been a dialysis patient for 10 years. She says she has seen cockroaches and blood stains on the ground of dialysis centers and worries about infections. (Ana B. Ibarra/California Healthline)

Dialysis treatment, also known as hemodialysis, filters impurities from the blood, and people with end-stage kidney disease need it to stay alive. DaVita Kidney Care and Fresenius Medical Care are the industry giants.

Dialysis is a very dangerous procedure, Foster said: “They are literally taking all the blood out of your body, anything could go wrong.”

Roughly 66,000 Californians with kidney failure rely on dialysis, according to the U.S. Renal Data System.

Backed by the powerful Service Employees International Union–United Healthcare Workers West, Foster and others are turning to the ballot box in an attempt to meet their demands. After they rallied in Los Angeles and three other California cities Thursday, they delivered more than 600,000 signatures to election offices around the state.

They need about 60 percent of those signatures to be verified in order to get a proposal on the Nov. 6 ballot. The measure would limit dialysis companies’ revenues to 15 percent above what they spend on patient care. If their revenues exceeded that threshold, the companies would have to refund the difference to insurers or patients. 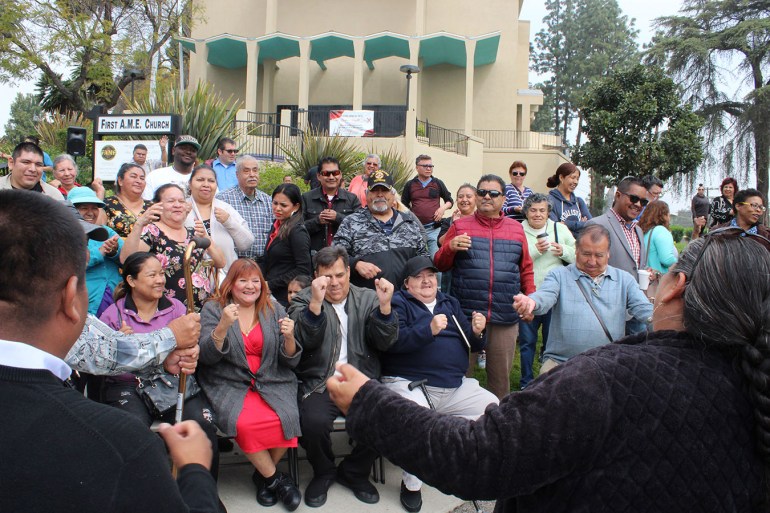 A group of dialysis patients and their family members cheer after cardboard boxes full of voter signatures are packed onto a van to be transported to the Los Angeles County Registrar of Voter’s office in Norwalk. (Ana B. Ibarra/California Healthline) 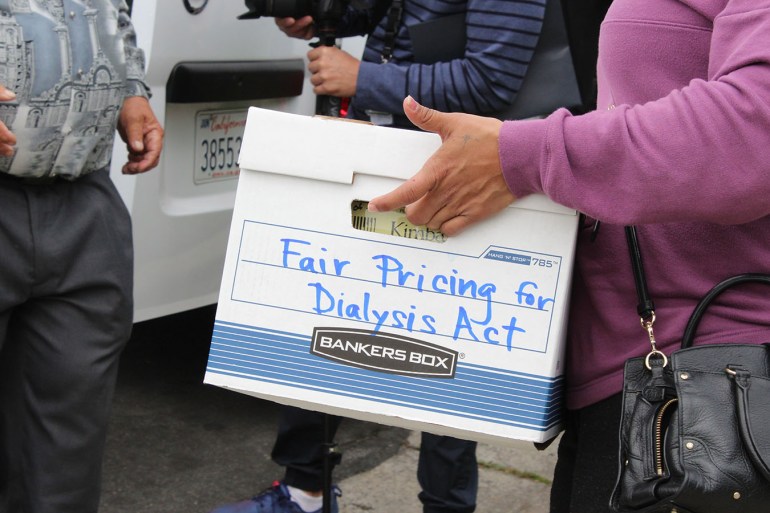 Cardboard boxes full of voter signatures are packed onto a van to be taken to the Los Angeles County Registrar of Voter’s office in Norwalk on Thursday. (Ana B. Ibarra/California Healthline)

Supporters of the proposal are banking on the idea that companies like DaVita and Fresenius would rather provide more care than give money back to insurance companies. Neither company would comment on the matter.

At Thursday’s rally, patients and their loved ones loaded a dozen boxes stuffed with signed petitions onto a van headed for the Los Angeles County Registrar of Voters. Onlookers — some standing, others in wheelchairs — clapped and cheered.

Some carried photos of deceased parents and family members who were once dialysis patients. 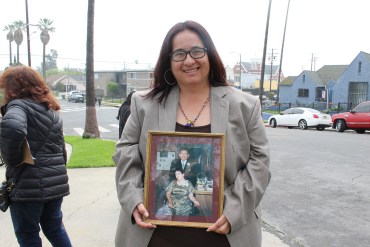 Cecilia Gomez-Gonzalez of El Monte says both her parents were dialysis patients. She supports The Fair Pricing for Dialysis Act because after spending years with them in dialysis centers, she saw “tragic things happen.” (Ana B. Ibarra/California Healthline)

One of the church’s pastors, Edgar Boyd, told the crowd that many people in his congregation and community are on dialysis, including his brother.

Opponents of the measure say that putting a cap on how much revenue clinics can keep might backfire: Clinics, especially ones run by nonprofits, could end up struggling to cover their operating costs.

Miguel Estrada, a technician who monitors patients in a DaVita clinic in San Rafael, Calif., believes that the measure would force clinics to reduce care for patients and possibly shut down. Estrada belongs to a group called Patients and Caregivers to Protect Dialysis Patients, a coalition opposing the measure that is funded by the industry.

He said the clinics where he’s worked have not been dirty and unsanitary.

Debbie Coote, another technician, also thinks dialysis patients will suffer if the ballot measure is approved. “If they reduce how much is being reimbursed, how are they going to afford to hire more people and buy new machines?” she said.

One dialysis nurse who attended the rally said she’s fed up with clinic conditions. Ida Deperio, who works at a DaVita clinic in Montebello and a Fresenius clinic in West Covina, said both sites are severely understaffed.

Ideally, you would assign no more than four patients to each technician, explained Deperio, 59, who came to the rally in her scrubs. Yet in some cases, technicians have to monitor nearly a dozen patients at a time, she said.

“That’s crazy,” Deperio said, noting that a higher patient load increases the chance of errors. “I’m scared for my patients and for my license.”