“Road to Reform” last week posed the question if the Affordable Care Act was improving our health.

We may not have the answer yet — but we do have some new insight.

A major study on the effects of having health insurance went live on Monday. And the results ended up being both relevant and groundbreaking: Mortality noticeably fell in Massachusetts after the state expanded health coverage.

As noted last week, no researchers have ever been able to make a firm connection between giving people health coverage and seeing health outcomes subsequently get better.

But based on this new study, it seems that “expanding insurance substantially improves the well-being of people who get it,” Harvard’s Katherine Baicker told the New York Times.

So by extension, it appears that the Affordable Care Act is making health care somewhat better, too.

How the Study Worked

Baicker and her co-authors — Ben Sommers, a Harvard professor and the study’s lead author, and Sharon Long of the Urban Institute — took a look at how mortality in counties in Massachusetts compared with control counties in other states with similar economic conditions.

One specific focus was whether mortality changed when patients with conditions like cancer and heart disease — afflictions that could, in theory, be inflected by health coverage.

Here’s what the researchers found: Four years after Massachusetts expanded health insurance coverage, the death rate among non-elderly adults had fallen by nearly 3%. The decline was even steeper — 4.5% — among patients with conditions considered “amenable” to health care.

For a visual comparison of that decline, see the chart from the Los Angeles Times below: 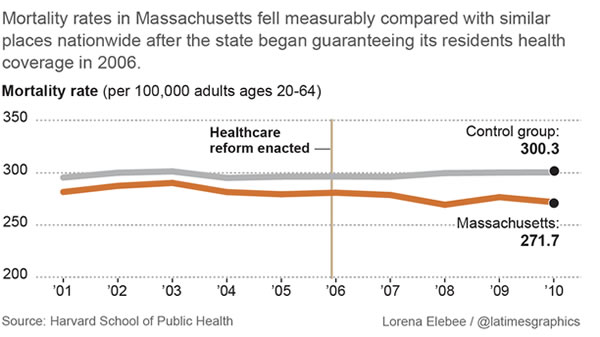 Did California Just Save 2,300 Lives by Expanding Obamacare? Let’s Do The Math.

Since the study’s publication in Annals of Internal Medicine, the researchers have confidently proclaimed that health coverage does more than keep people healthier — it saves lives.

“Nationally, you have to be careful [when trying] to extrapolate from one state,” Sommers said in an interview, noting the many differences between Massachusetts and other states — everything from the range in residents’ financial situations to whether state officials support the idea of public coverage expansion.

That hasn’t stopped other researchers from getting animated about the findings, or openly conjecturing about the implications. Their excitement is chiefly because the Annals study is a rare confirmation of what many had long suspected (but couldn’t prove) — that giving people health insurance ends up making them healthier.

The research and policy communities also are enthusiastic because the study changes the tone of debate over health reform, contends Austin Frakt, a health economist and New York Times contributor. (Frakt wrote the editorial accompanying the new study.)

That’s largely because the findings from Massachusetts put real numbers around a potential impact of coverage expansion: For every 830 people who received coverage, one death was prevented, the authors say.

So rather than ask whether “does health insurance improve health,” we can now focus on the more productive conversation of “how much to spend to save a life,” Frakt posted on Twitter.

The new data could help quantify the impact of a state’s decision to expand coverage under Obamacare.

That’s particularly true in a state like California — where millions have obtained coverage through the law, but one sticking point is that many of those people may have been previously insured.

Acknowledging the many caveats of trying to export findings from one state to another, how effective might the ACA be at helping save lives in California? Specifically, if the state saw mortality gains comparable to Massachusetts?

To figure it out, we’ll rely on data provided by Covered California; takeaways from the new Annals study; and estimates that Ken Jacobs, chair of the Labor Center at UC-Berkeley and one of the creators of the CalSIM model, shared with my colleague David Gorn.

Let’s start by examining the number of privately insured.

Meanwhile, California’s Medicaid numbers are a little easier to figure out.

Taken together, that’s a little bit more than 1.91 million people who are presumably newly insured. And applying the Massachusetts calculation — one saved life for every 830 who get coverage — translates to a little more than 2,300 lives saved every year in California, thanks to the ACA.

But that figure may only be scratching the surface.

California had more than 7 million uninsured residents in 2012; while that number could fall by about 6 million through 2017, Rachel Dornhelm writes for KQED’s “State of Health,” it isn’t vanishing right away.

“We really think that enrollment in ACA is a three-year process rather than get everyone enrolled the first year,” Gerald Kominski, professor of health policy and management and director of the UCLA Center for Health Policy Research, told Dornhelm.

If California continues to achieve its coverage goals, and the Massachusetts conversion holds true, the state would end up saving more than 7,200 lives a year thanks to Obamacare.

Some critics have pointed out that it’s far too simplistic to take the state-specific results of one state and apply them to another.

Writing on Twitter, economist Stephen Parente of the University of Minnesota has called it an “apples and oranges” comparison.

Nor should we expect that getting the uninsured to sign up for coverage means that they’ll immediately start receiving care. The huge crunch of new enrollees in California means that Medi-Cal has been plagued by troubles, with a backlog of 900,000 pending applications as of last week. There’s also a logistical problem facing current enrollees: “The renewal form is really a mess,” Elizabeth Landsberg of the Western Center on Law and Poverty told California Healthline. That could hamper renewals and lead some to lose coverage, too.

The crunch of newly insured Americans also presents a different kind of challenge: There might not be sufficient provider access to cope with the demand of patients, leading to wait lists that cancel out some of the positive effects of having insurance.

Still, the Massachusetts study suggests these are better short-term problems to wrestle with than the long-term problem of lacking coverage. Especially because the full effects of health coverage expansion may not be revealed for some time.

Here’s what other stories are making news on the road to reform.

The looming uncompensated-care burden: Writing at the Washington Post‘s “WonkBlog,” Jason Millman notes that providers deliver as much as $85 billion in uncompensated care today, and that’s not going away with coverage expansion.

Why didn’t Latinos sign up for Obamacare? National Journal‘s Clara Ritger goes deeper into the mostly logistical reasons behind the reluctance.

More than 80% of exchange customers have paid their first month’s premium: That’s according to insurers’ testimony presented at Wednesday’s House hearing on Obamacare enrollment, Alex Wayne reports for Bloomberg.

Did California Just Save 2,300 Lives by Expanding Obamacare? Let’s Do The Math.