Senator Ed Hernandez (D-West Covina), who chairs the Senate Committee on Health, this week announced a measure that would require pharmaceutical companies to notify state health programs and private insurers before they increase prices. Hernandez dropped a similar bill last session because he was dissatisfied with amendments that raised the threshold for reporting.

Hernandez said it is even more important to pursue drug price transparency in the aftermath of the Nov. 8 election. California “take[s] the lead” on many policy issues, he said, naming the environment, health care and immigration. The heavily Democratic state’s role in health policy has become “even more important,” with the election of Donald Trump and a Republican-dominated Congress, he said. 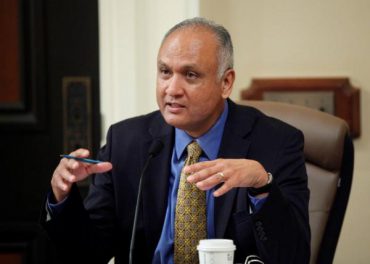 The health chairman’s new legislation appears to be similar to the bill he introduced last year, SB1010, though in its early form, it contains few details. The new bill says that prior notification of a price increase by manufacturers would help payers of prescription drugs manage costs and help inform the public about the justifications for such increases.

The bill Hernandez scrapped would have required drugmakers to notify state programs and insurers in writing when they raised the price of a drug by 25 percent or more, or by more than $10,000 over the course of a year. It also would have required three-day advanced notice before they could sell a medicine costing $10,000 or more.

Protecting patients’ access to drugs and advancing innovation in the state’s biomedical sector are both a “top priority,” he said in an emailed statement.

“We look forward to working with the Chairman, his colleagues in the legislature, and the Administration in pursuit of these important goals throughout the coming legislative session.”

Last year, the association spent $723,529 lobbying in Sacramento from the beginning of 2015 to the end of September of this year, according to the California Secretary of State. Only some of that money was spent lobbying against Hernandez’s legislation, but the senator said he had encountered strong opposition to the measure and ultimately pulled it when he felt amendments had weakened its effectiveness.

The amendments by the Assembly Appropriations committee raised the reporting threshold for drug price increases from 10 percent to more than 25 percent. The amendments also removed the requirement for drug companies to provide justification for the price increases and delayed by a year when these notifications would have to go into effect.

About sixteen states considered some sort of drug price transparency measures last year, according to the National Conference of State Legislatures (NCSL). Some of them, unlike the first Hernandez bill, proposed that drugmakers disclose research and development costs. Most of them failed, except for Vermont’s proposal, which was signed into law this past June.

Vermont’s law requires, among other things, that the state identify the 15 drugs on which it spends the most and which have also been subject to price increases of 50 percent or more over the past five years. Virginia will consider its transparency legislation again this coming year, according to NCSL.

“Transparency… [puts] pressure on the markets to control prices,” Hernandez said, adding that he doesn’t believe in regulating the actual prices of the drug or eliminating companies’ ability to make a profit. But their profits, he said, should not “gouge” patients or taxpayers.

Patient advocates support the measure, saying recent news about the Epipen prices increases has helped their cause.

“The public anger over skyrocketing prescription drug prices is not going away,” Anthony Wright, executive director of Health Access, a co-sponsor of the legislation, said in a written statement. “We are confident we will be able to make progress in the new year.”