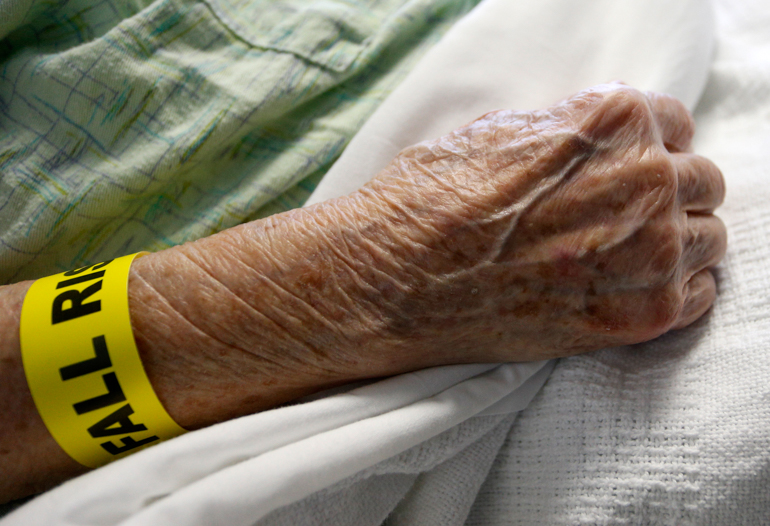 Thelma Atkins, 92, was admitted to the geriatric unit at the University of Alabama at Birmingham (UAB) Hospital-Highlands after a neighbor at her senior living facility ran over her feet with a motorized scooter. Hospital staff got her up and walking soon after her arrival. (Hal Yeager for California Healthline)

BIRMINGHAM, Ala. — Thelma Atkins ended up in the University of Alabama at Birmingham (UAB) Hospital-Highlands after a neighbor in her senior living center ran over her feet with a motorized scooter.

Terri Middlebrooks, a nurse at the hospital, tried to figure out how active the 92-year-old Atkins was before the incident. “Are you up and moving at home?” she asked.

“I can manage, but I have to have help sometimes,” Atkins replied.

Atkins said she uses a walker to visit friends and to get to the communal dining room. But she’s also fallen a few times in recent years.

“Don’t quit walking here,” Middlebrooks told her. “It’s the most important thing you can do. … This bed is not your friend.”

Middlebrooks is the coordinator of a unit designed to address the challenges specific to caring for the elderly. She told her new patient that throughout her stay, one of the main goals would be to keep her active.

The medical center’s effort to get older patients up and moving while they are in the hospital is far from typical. Despite a growing body of research that shows staying in bed can be harmful to seniors, many hospitals still don’t put a high priority on making them walk.

At UAB Hospital-Highlands’ 26-bed geriatric unit, known as the Acute Care for Elders unit, or ACE, patients are encouraged to start moving as soon as they arrive. The unit is one of a few hundred around the U.S. that is attempting to provide better and more tailored care to geriatric patients.

The hospital opened the unit in 2008 with the recognition that the elderly population was growing and that many older patients didn’t fare well in the hospital. ACE units are based on the idea that if the unique needs of seniors are met, they will have better outcomes and their care will be less costly.

Research has shown that the units shorten patients’ stays in the hospital, reduce their likelihood of returning too soon after discharge and make it less likely they will be sent to a nursing home. 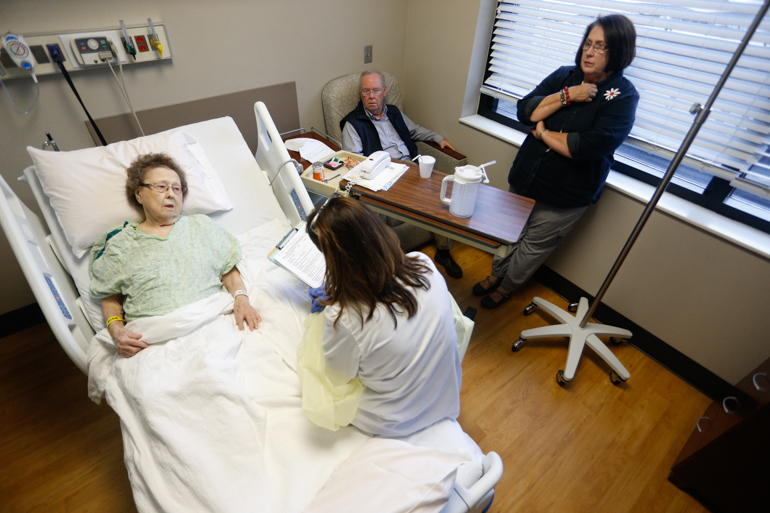 Thelma Atkins, 92, talks to Terri Middlebrooks, a nurse who manages the geriatric unit at UAB Hospital-Highlands. Atkins’ daughter and son-in-law listen in. Middlebrooks says that “patients walk in the door of a hospital and think it’s OK to stay in a bed. It’s not.” (Hal Yeager for California Healthline)

In addition to employing specially trained staff who work together as a team, the Alabama unit has special handrails attached to the walls, low-glare lighting and non-skid floors. Every room has a walker and plenty of space to move around. Volunteers walk with patients, and therapists work with them on maintaining their strength.

Staff members try to disabuse patients of the idea that they are there to rest. “People walk in the door of a hospital and think it’s OK to stay in a bed. It’s not,” said Middlebrooks.

Andres Viles, a nurse coordinator, said nurses at other hospitals are often so busy administering medications and tending to wounds that they don’t make time to walk with their charges. The emphasis on patient mobility is “a culture change” for most hospitals, he said.

At UAB Hospital-Highlands, that shift took a lot of education. Staff members in the new unit attended workshops that included role playing and sensitivity training. The hospital also trained “geriatric scholars,” who became advocates for addressing the particular physical and cognitive needs of seniors. 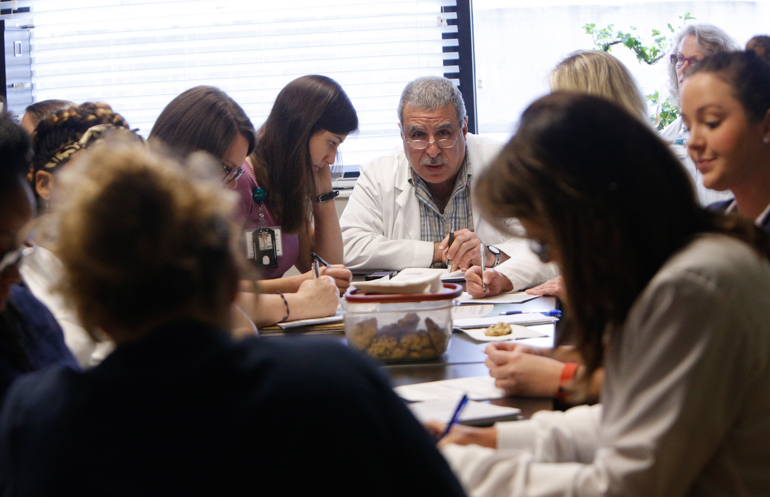 A team of medical professionals gather for a daily meeting to discuss the elderly patients at the Acute Care for Elders, or ACE, unit at UAB Hospital-Highlands. (Hal Yeager for California Healthline)

The Affordable Care Act explains some of the reluctance by staff at many hospitals to get patients moving, experts say. Under the law, hospitals are penalized for preventable problems, including falls. Researchers believe that hospital staffers, to ensure their patients don’t fall, often leave them in their beds.

“We are doing an awful lot to prevent falls, but there is a cost,” said Heidi Wald, an associate professor at the University of Colorado School of Medicine. “The cost is decreased mobility.”

Researchers said there are other explanations for the failure of hospitals to get elderly patients moving. They may not have enough staff, for example, or they may fear lawsuits.

Families won’t sue if their mom gets weaker in the hospital, but they may if she falls, said Cynthia Brown, director of the Division of Gerontology, Geriatrics and Palliative Care at the UAB School of Medicine. 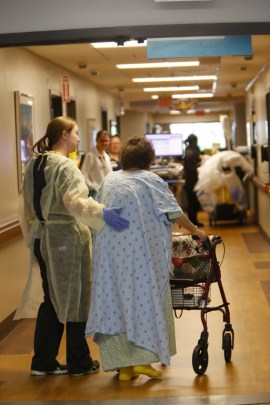 “Why would the hospital want to put themselves at risk for litigation or the CMS [Centers for Medicare and Medicaid Services] coming back and biting them?” she said.

Brown added that hospital staffers around the country generally do not consider walking with patients to be as important as their other duties. “It is just one more thing on a list of a whole lot of things,” she said. “Often times, walking falls to the bottom.”

It’s also harder for patients to walk around if they are attached to IV lines or oxygen tanks, or if they take drugs that make them sleepy. Such medication or equipment is not always necessary.

The very layout of hospitals and the way they operate makes it too easy for patients to remain stationary. They can control their televisions by raising a finger, and they typically get their food in bed.

On average, hospitalized older patients spend just 43 minutes a day standing or walking, according to a study by Brown published in the Journal of the American Geriatrics Society. They are in bed more than 80 percent of their hospital stay, she found.

The impact of remaining so sedentary in the hospital can be devastating for older patients: It is puts them at greater risk for blood clots, pressure ulcers and confusion.

Immobility can also reduce patients’ ability to take care of themselves when they go home — a difficulty that persists a month after their discharge, according to Brown. And it puts them at higher risk of readmission to the hospital, according to research.

Immobility hurts older patients more than younger ones, in part because the elderly are generally weaker, have less bone density and are at higher risk of falling. Ironically, keeping a patient in bed, which is often intended to prevent falls in the hospital, can increase their risk of falling after they are discharged, experts said.

Instead of returning home to their normal lives, patients who can’t walk when they leave the hospital are more likely to go into nursing homes, said Seth Landefeld, chairman of the Department of Medicine at the UAB School of Medicine.

“They don’t bounce back,” Landefeld said. “The pneumonia is better, but Aunt Mary is not walking and talking the same as before.”

Landefeld said hospitals frequently take the “smart bomb” approach to illness. “We blow away the disease, but we leave a lot of collateral damage,” he said.

Making sure hospitalized patients spend sufficient time out of their beds can save money, keep them mobile after they return home and improve their overall health. Researchers in Texas found that increasing the number of steps elderly patients took on their first and last days in the hospital reduced their risk of dying over the following two years. A study of pneumonia patients of all ages showed that walking early in their hospital stay shortened its duration, saving an average of $1,000 per patient.

The hospital hosts a twice-weekly session called “Move and Groove,” designed to get older patients dancing. At a recent session, a music therapist played the piano as the patients held tambourines or bells and moved their feet to the beat. All of the patients used walkers. A few had oxygen tanks and most wore bracelets indicating they were at risk of falling.

Willie Mae Rich, 86, rests after a short walk around her room. Nurse coordinator Andres Viles told Rich, “This bed is not your friend.” (Hal Yeager for California Healthline)

Occupational therapist Linda Pilkerton said she doesn’t give patients a choice of whether to participate.

“We don’t ask them if they want to do an x-ray or if they want a CT scan,” she said. “This is ordered by the doctor. If they don’t get up and move, they start the death spiral.”

After Atkins was admitted to the unit following the scooter mishap, Middlebrooks told her it would only take two days of lying in bed to lose muscle mass. “And if you lose muscle mass, you get weaker and you’re more apt to fall,” the nurse explained, adding that Atkins had done enough of that.

Atkins, who has a pacemaker and has had hip and hernia surgeries, said she has lived alone a long time and doesn’t want to end up in a nursing home. As she pushed her walker down the hospital corridor, she acknowledged that she’s gotten weaker as she’s gotten older and that her arthritis makes it more difficult to shower and dress by herself.

But she said she’s determined to keep walking — at home and in the hospital.

“I don’t want to lose more independence,” she said. “I’ve already lost a lot of it.”

But even if patients spend a lot of time out of bed while they are in the hospital, it does not guarantee they will recover.

Willie Mae Rich, 86, came to the Alabama hospital this spring because her doctor was concerned about her heart. Rich knew her bones wouldn’t withstand a fall, so she worried about walking around too much.

But the hospital staff didn’t give her a choice. They urged her to eat meals while sitting in a chair, get herself dressed and get up as often as possible.

“The more time you spend out of this bed, the healthier you’ll be,” Viles told her. 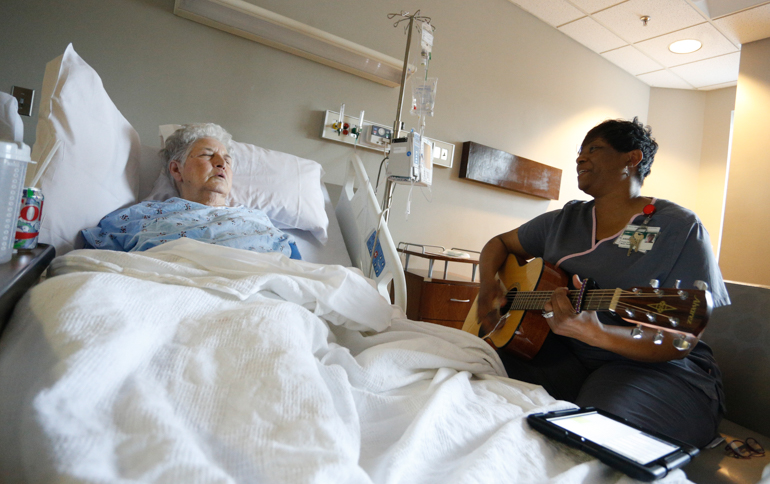 Despite staying active in the hospital, Rich, a great-grandmother, became more sedentary over the next several weeks. Her daughter, Debra Rich-Horn, said her mother continued to walk when she first came home, but soon she could barely get out of bed.

In May, she passed away.

“Her heart was already at a bad stage,” Rich-Horn said. “By the time [the hospital] got her, it was too late.”

This story was reported while its author, Anna Gorman, participated in a fellowship supported by New America Media, the Gerontological Society of America and The Commonwealth Fund.

Elderly Patients In The Hospital Need To Keep Moving