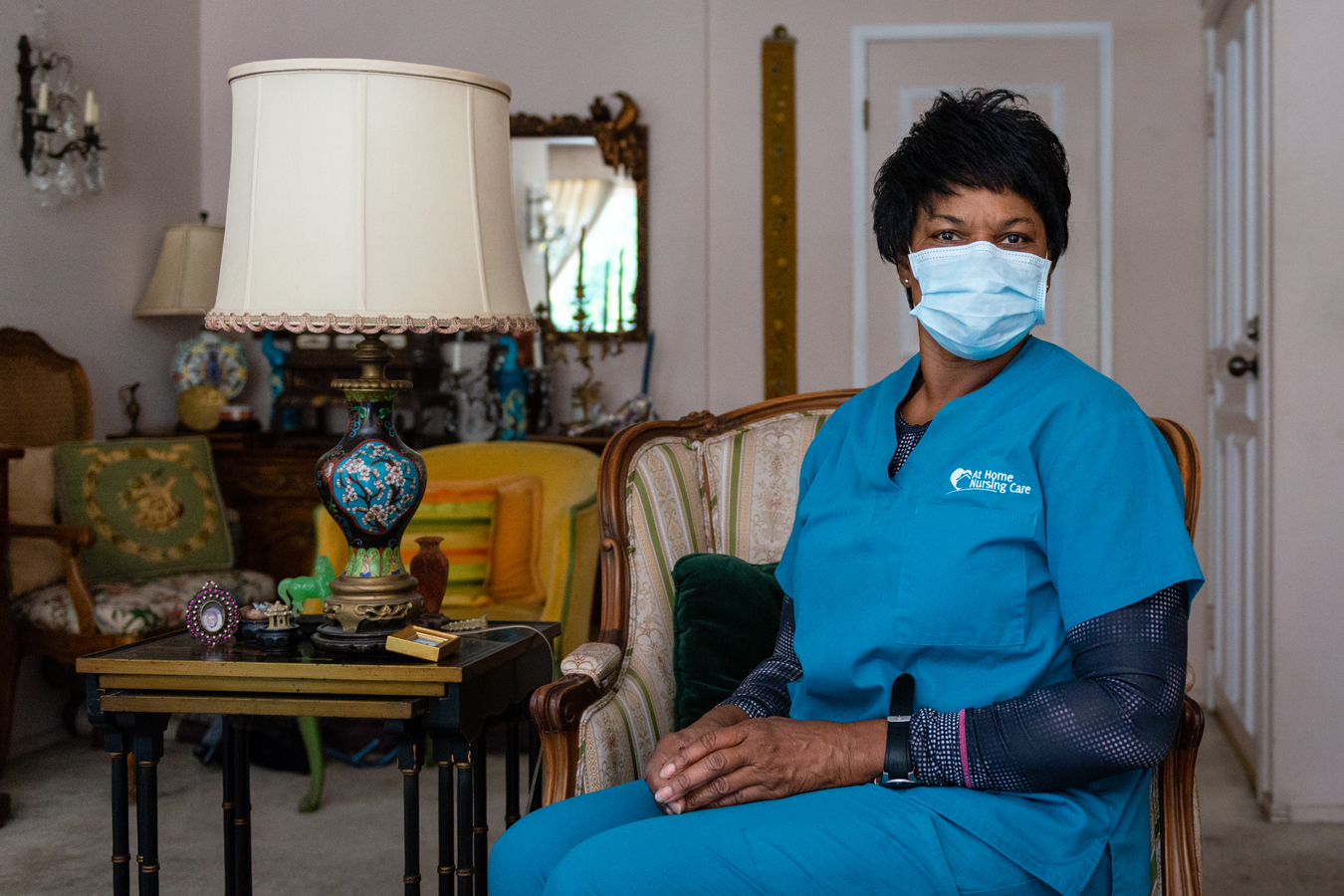 Pauline Lawrence is a home health aide for a 97-year-old man who depends on her. (Heidi de Marco/California Healthline)

This story can be republished for free (details).
WEST HOLLYWOOD, Calif. — Pauline Lawrence is 63, an age that puts her at increased risk if she contracts COVID-19.

Yet, three days a week, she spends 16 hours with someone at even greater risk: a 97-year-old man who depends on her and two other home health aides to survive.

“Somebody has to take care of him,” said Lawrence, an immigrant from Jamaica who lives with her 30-year-old son in a South Los Angeles apartment. “I will stand up to do what I have to do to help.”

Under California’s statewide stay-at-home order that is intended to stem the spread of the novel coronavirus — as well as similar orders issued by cities and counties — many businesses must shut down completely. More than 30 governors have issued similar orders for their states.

But the orders allow “essential” businesses to remain open and “essential” workers to stay on the job.

Who’s considered “essential”? For starters, health care workers, law enforcement personnel, plumbers and grocery store clerks. But many workers dubbed essential are not as obvious, including cannabis dispensary and entertainment industry employees under California’s statewide order, and gardeners and landscapers under the Los Angeles County order.

Among the people who continue to work without the luxury of working from home are a high percentage of low-wage earners, those who earn median hourly wages of $10.22, according to a recent national analysis by the Brookings Institution. And among low-wage earners, black and Latino workers are overrepresented compared with their share of the total workforce. 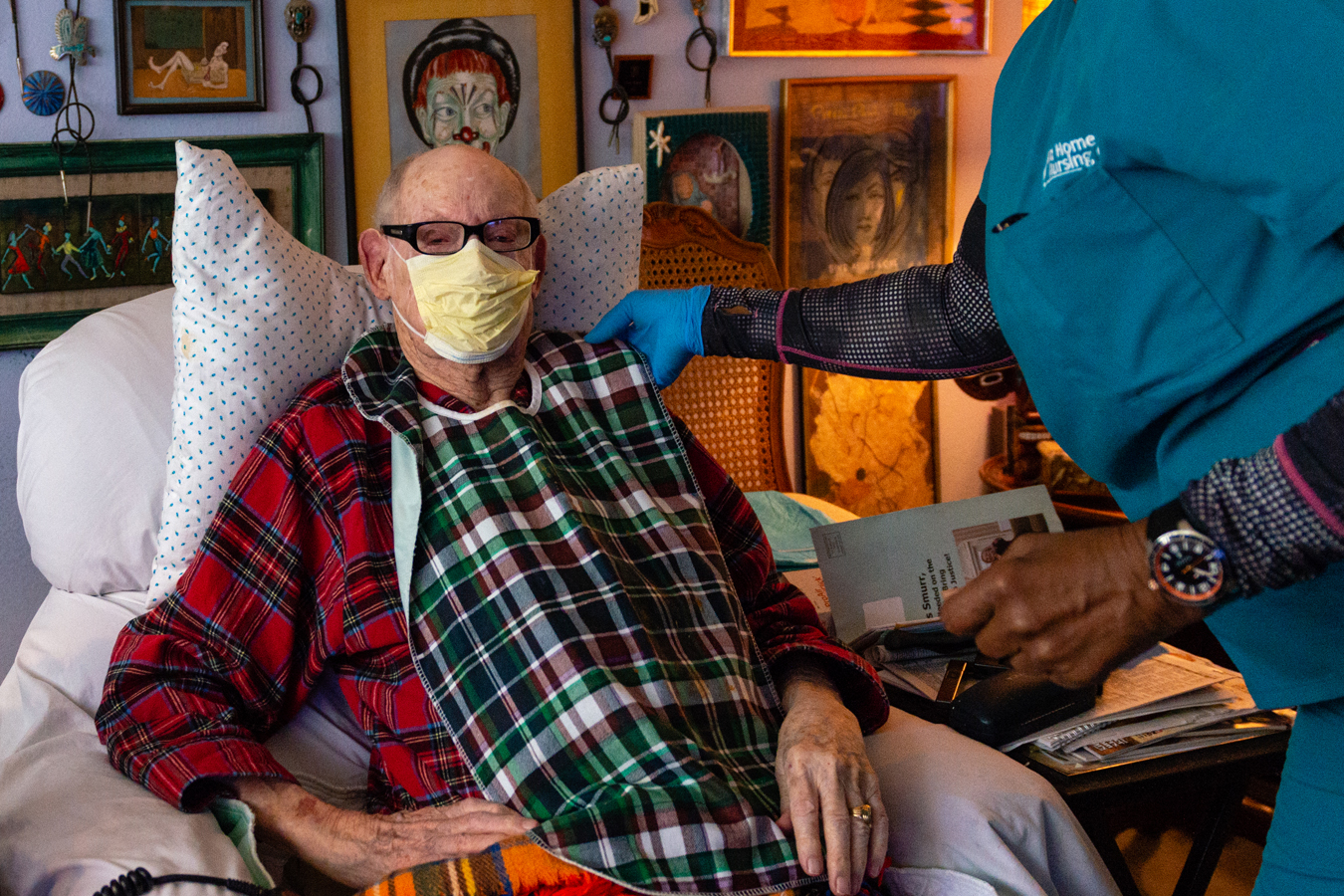 Lawrence cares for Charles Smurr, 97, a retired office manager. Smurr lives alone and depends on three home health aides to help him with his needs, from 7:30 a.m. to 11:30 p.m. every day. “I’m not afraid to keep working,” Lawrence says. “I’m a woman of God.” (Heidi de Marco/California Healthline) 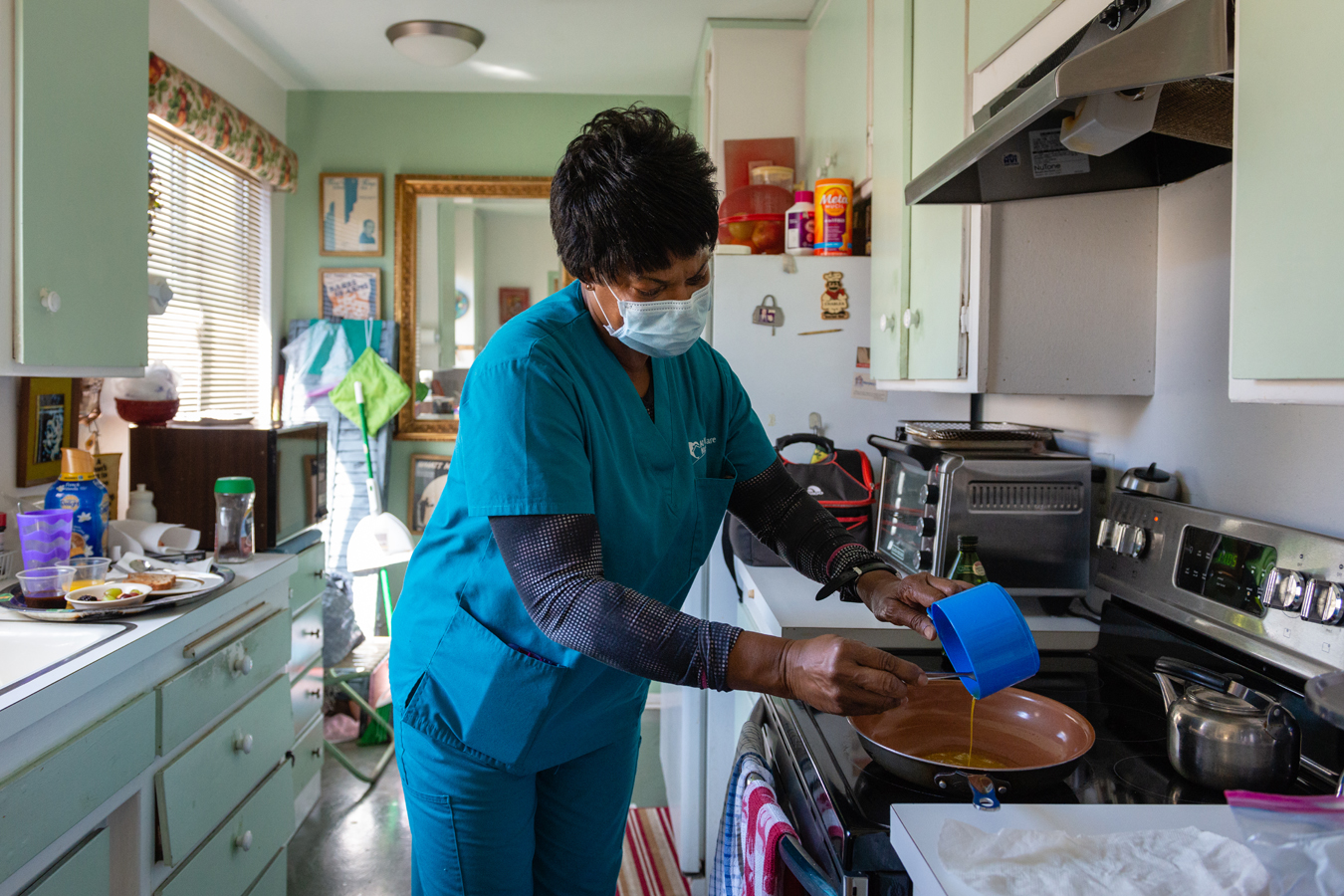 Lawrence, who wears protective gear during her entire shift, disinfects everything when she enters the two-bedroom apartment and as she works. After she leaves, she says, she does her best to prevent any germs from entering her home. “I take my clothes off and put them in a plastic bag before I enter my house.” (Heidi de Marco/California Healthline) 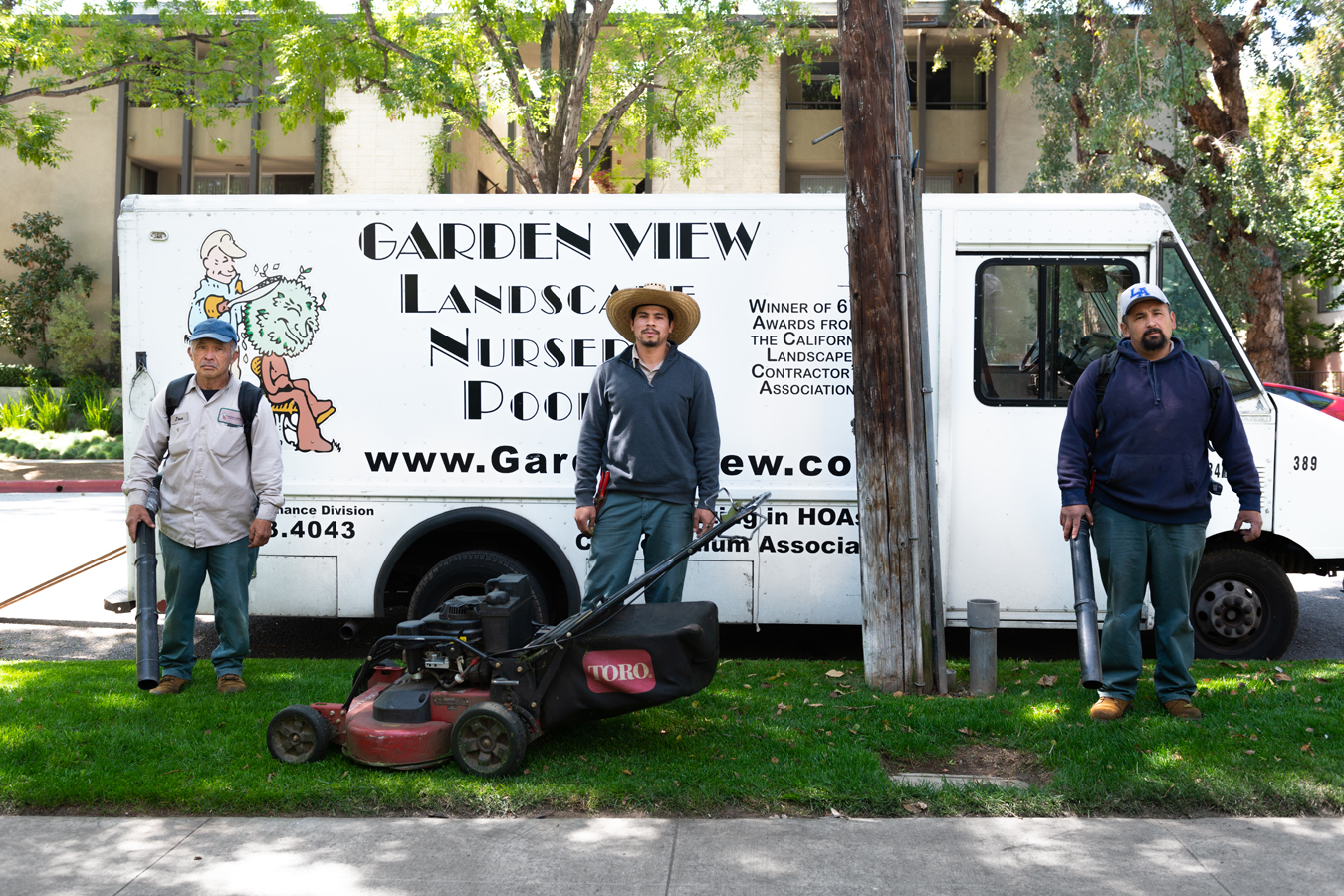 Jose Solorio, 56, Ismael Garcia, 33, and Oscar Bravo, 41, are landscapers in Pasadena, California. “We are worried like everyone else, but our risk is lower than if we worked in an office,” Garcia says. (Heidi de Marco/California Healthline) 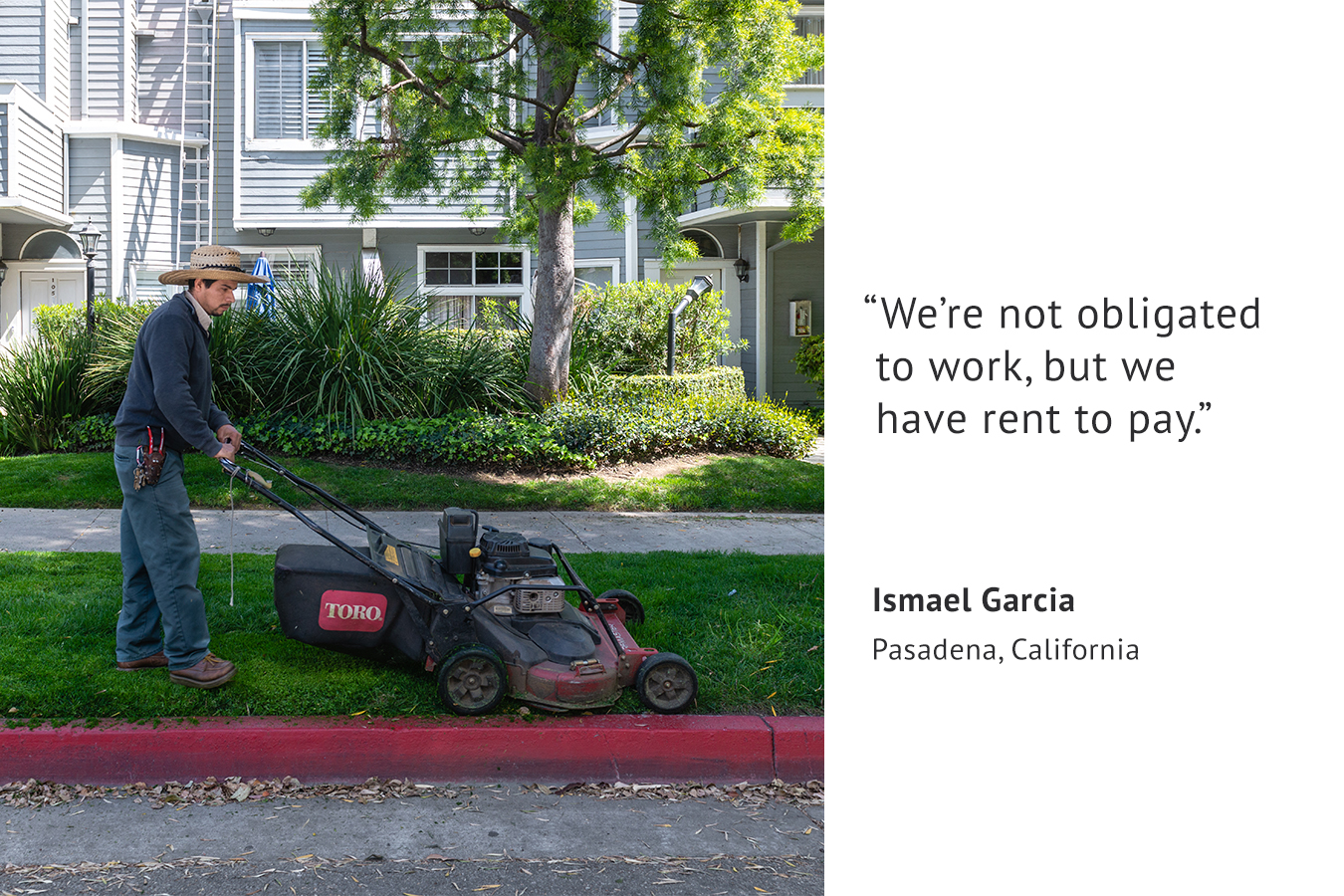 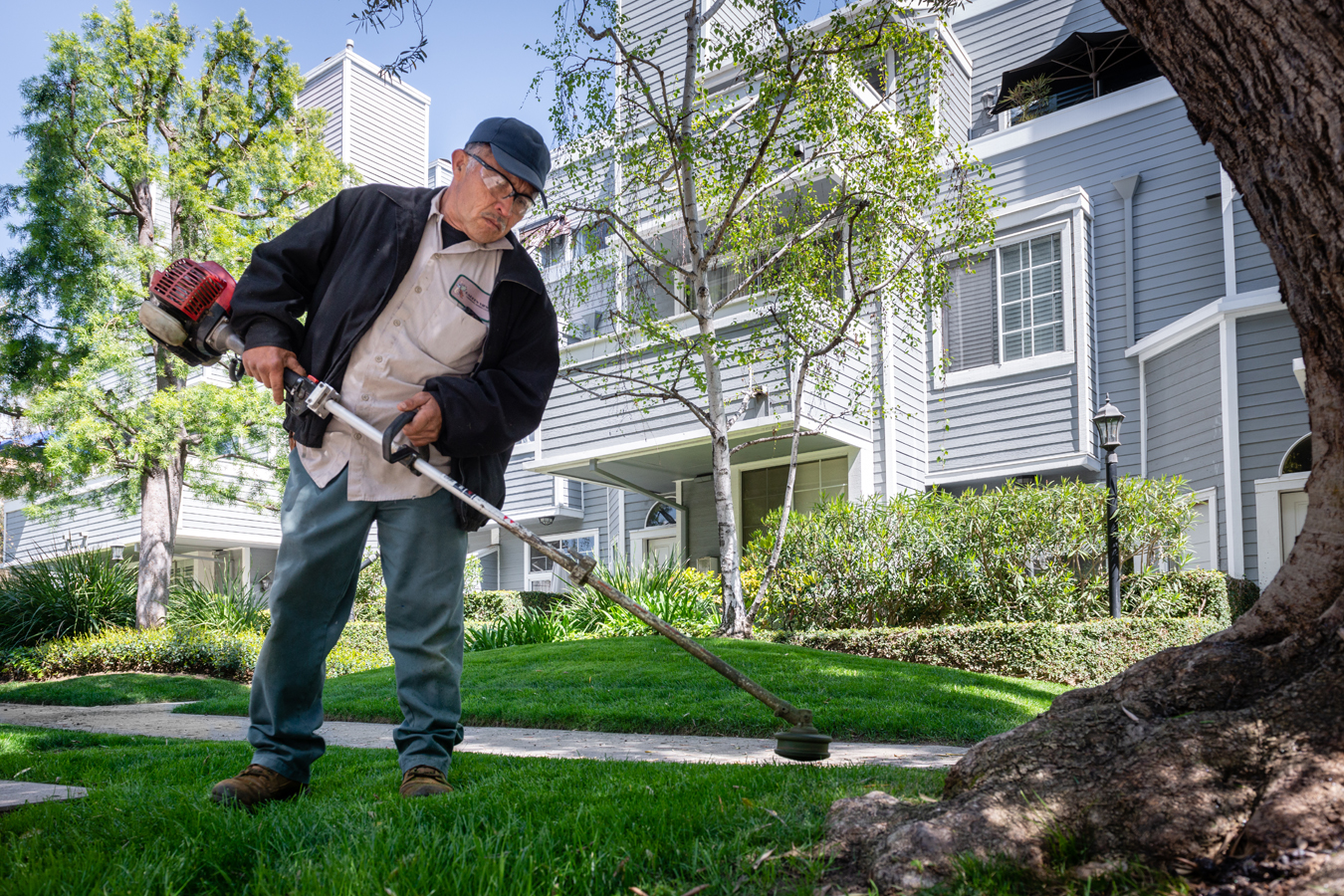 Jose Solorio says he will continue to work as long as he can. Like his co-workers, he is the main provider for his family. “It’s in God’s hands,” he says about the threat of getting sick. (Heidi de Marco/California Healthline) 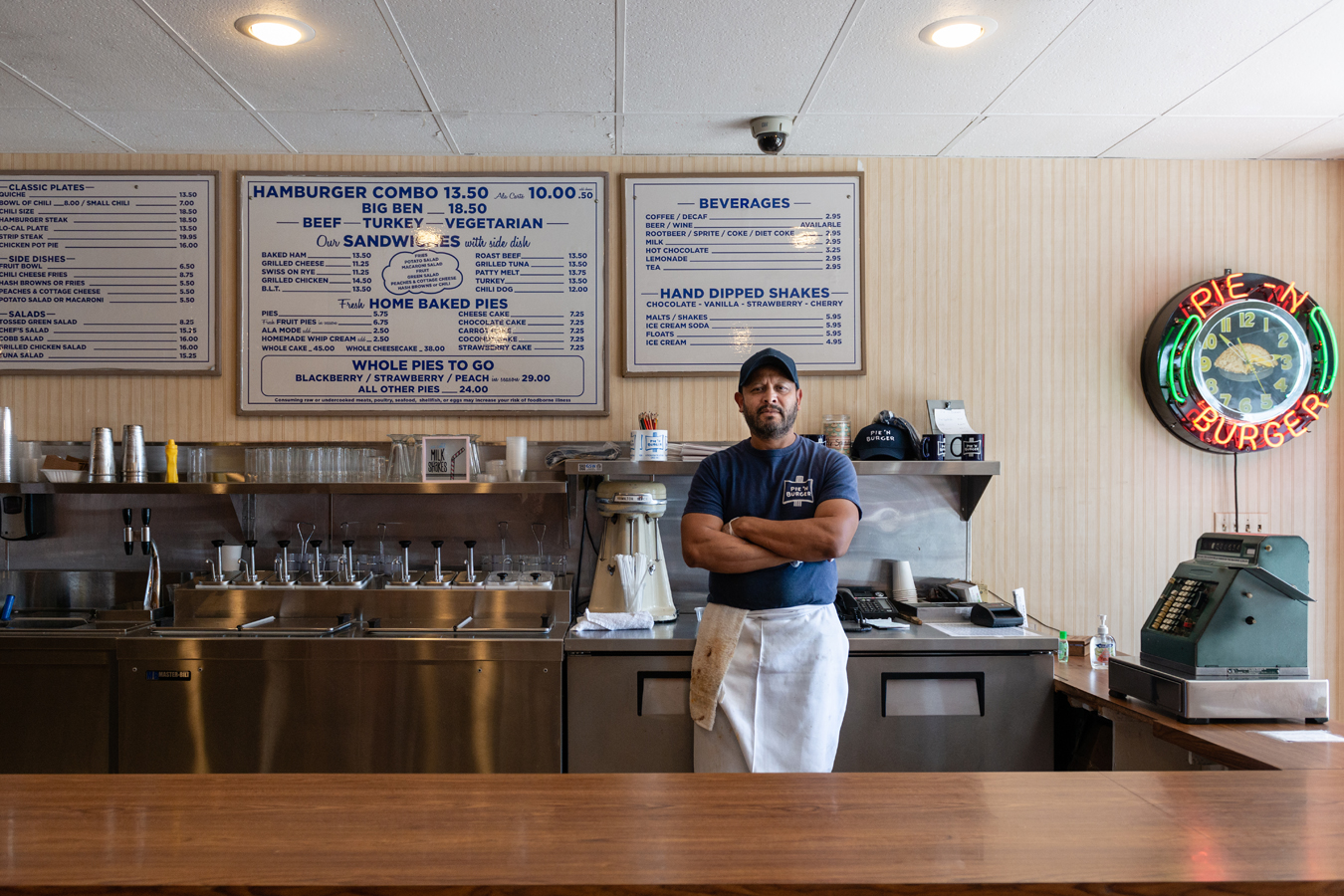 Tony Serrato, 34, is a cook at Pie ‘n Burger in Pasadena, where takeout orders keep him busy. His hours were cut when the stay-at-home order went into effect, and he now works 20 hours a week, down from 40. “It’s not enough, but it’s something,” he says. (Heidi de Marco/California Healthline) 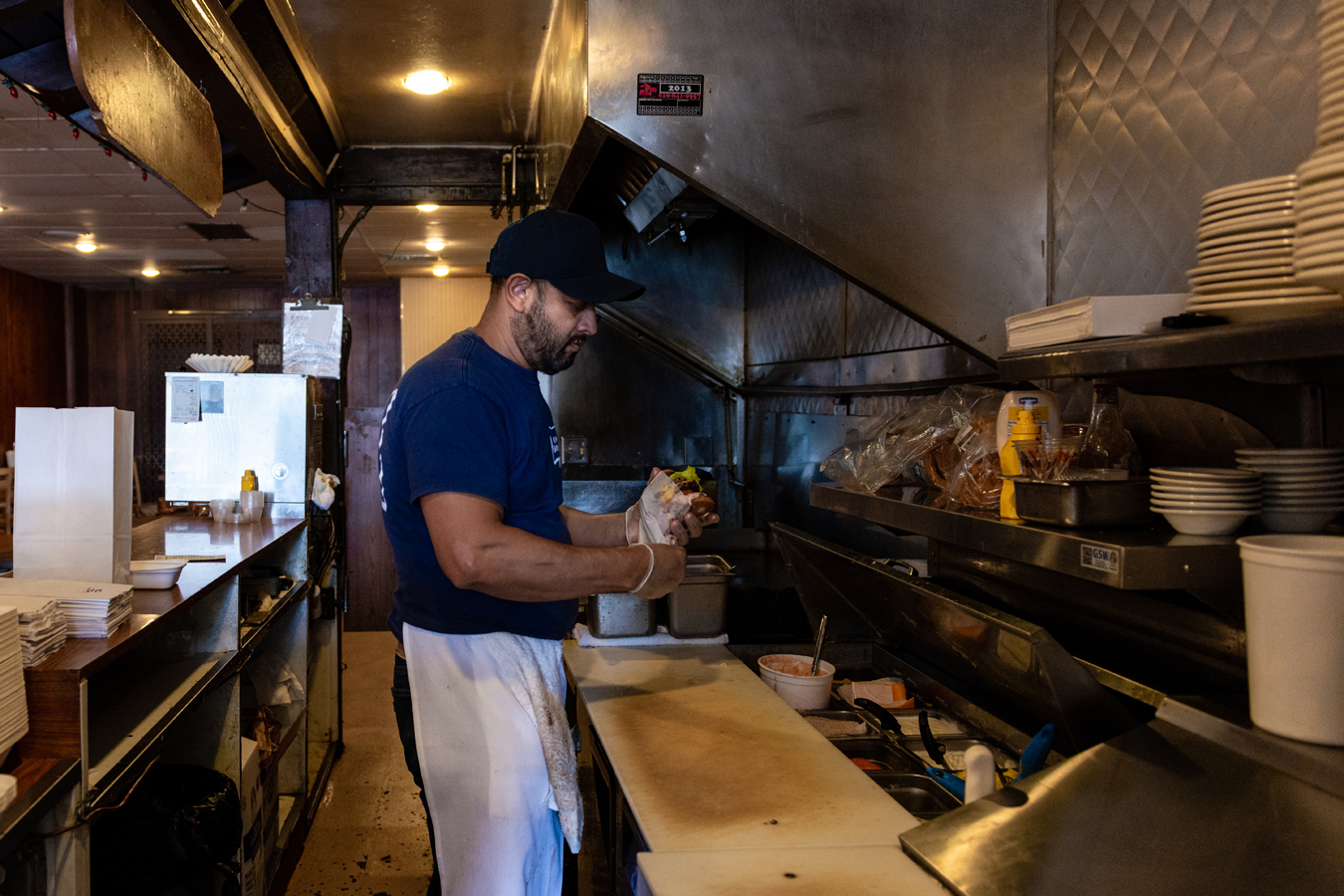 Serrato prepares a burger Thursday. Pie ‘n Burger employs just two workers per shift under the new coronavirus rules: one cook and one person answering the phones. Owner Michael Osborn says the restaurant is doing only about one-third of its regular business and is producing about 120 burgers a day. Osborn had to cut 25 employees when restaurants were ordered closed except for takeout or pickup service. He describes it as the hardest thing he’s ever had to do. (Heidi de Marco/California Healthline) 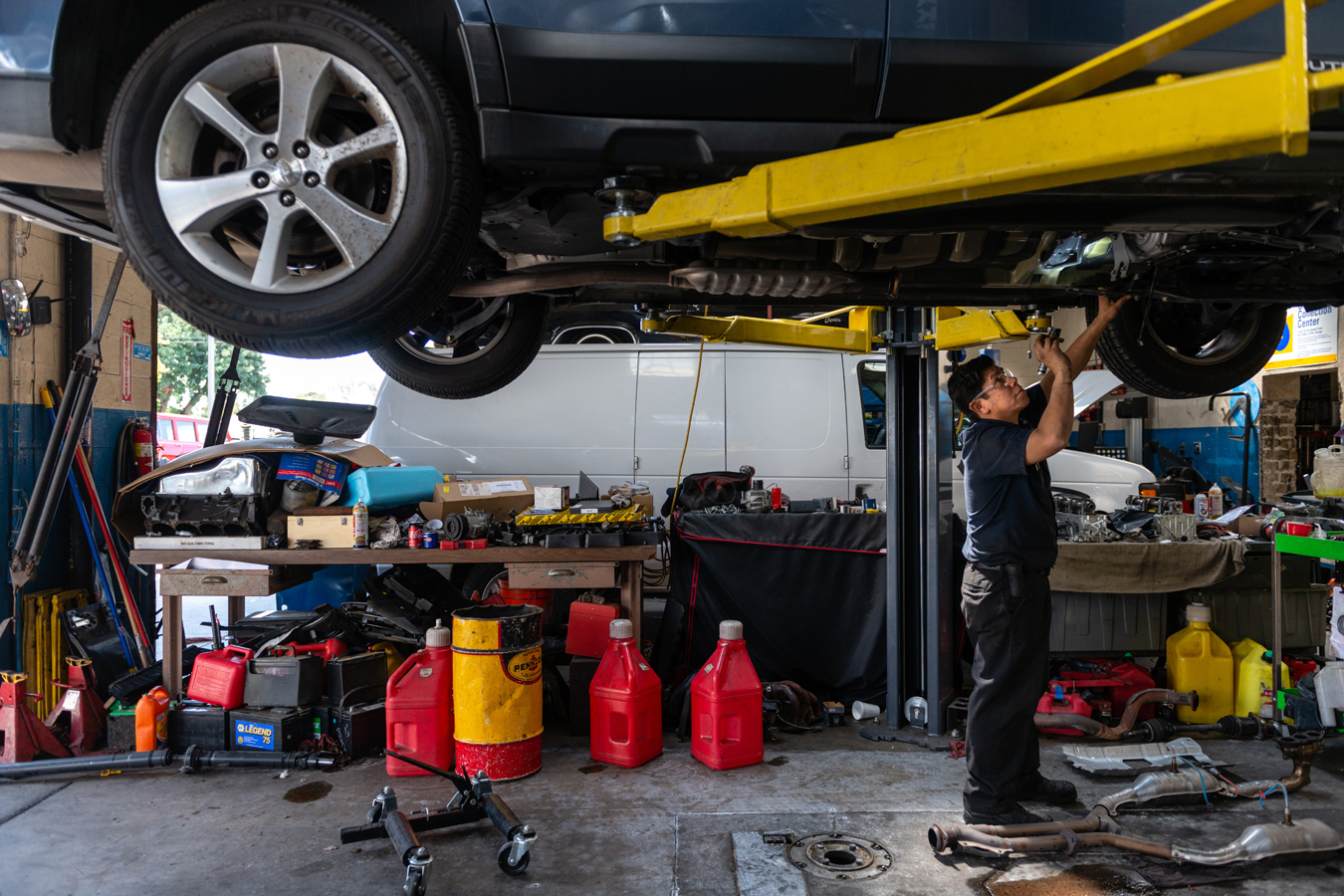 Gustavo Rojas, 33, works as an auto mechanic at Homer’s Auto Services in Monrovia, California. Rojas says work is consistent but slower than before. “Everyone needs their car,” he says. Rojas is part of a three-man crew. The mechanics don’t wear masks and only sometimes wear gloves, but Rojas says they wipe down high-touch parts of each car when it arrives at the shop, with a focus on the steering wheel. (Heidi de Marco/California Healthline) 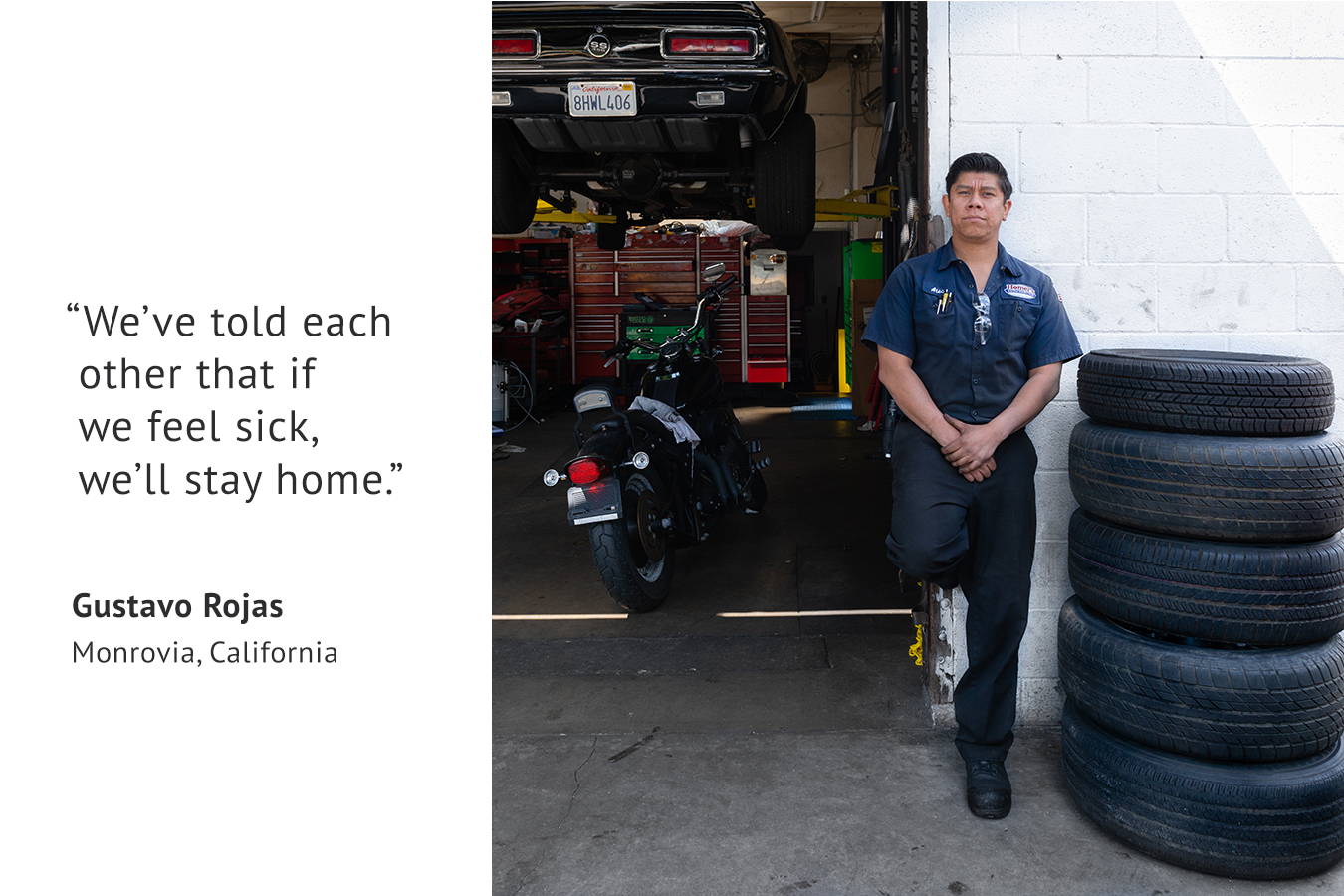 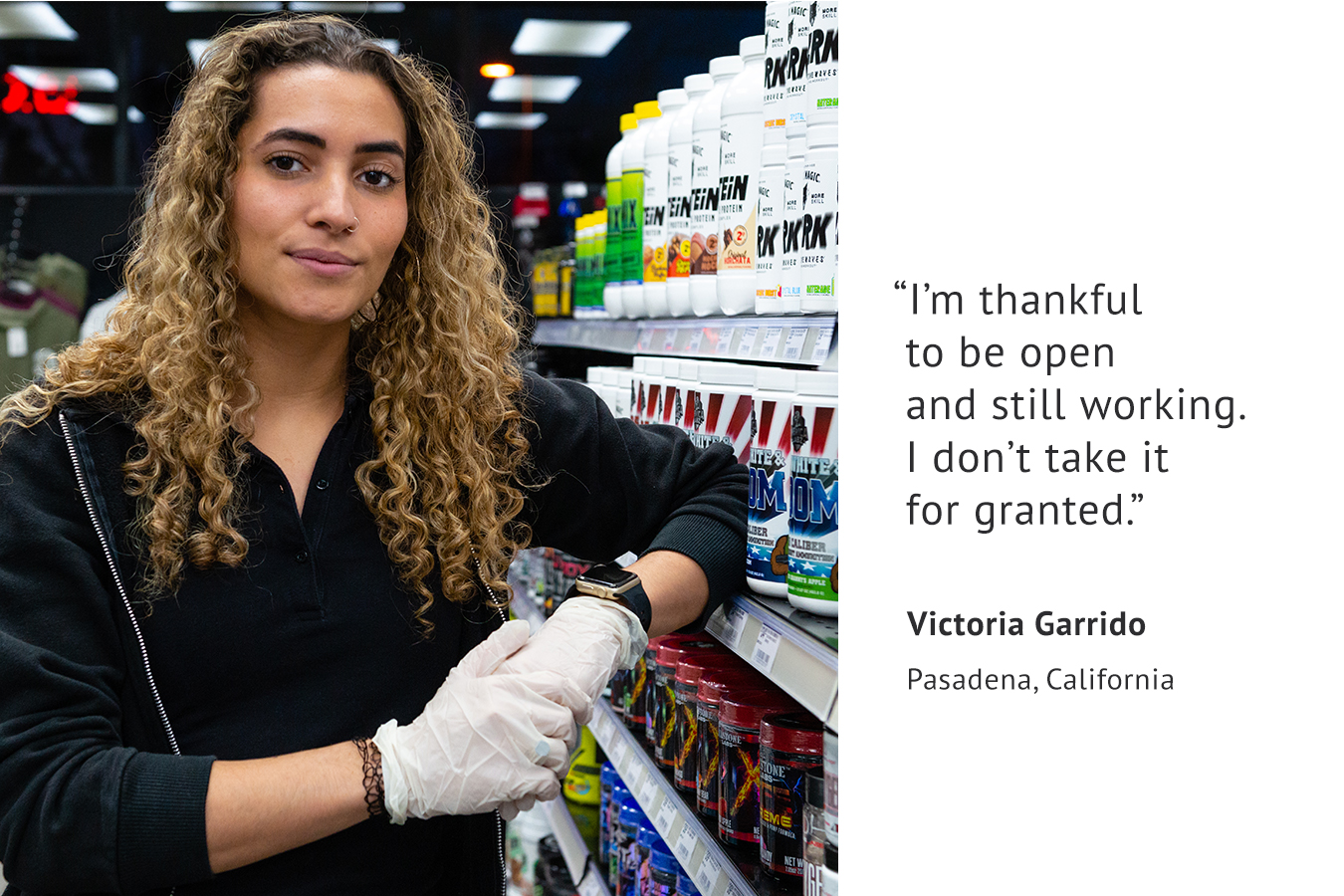 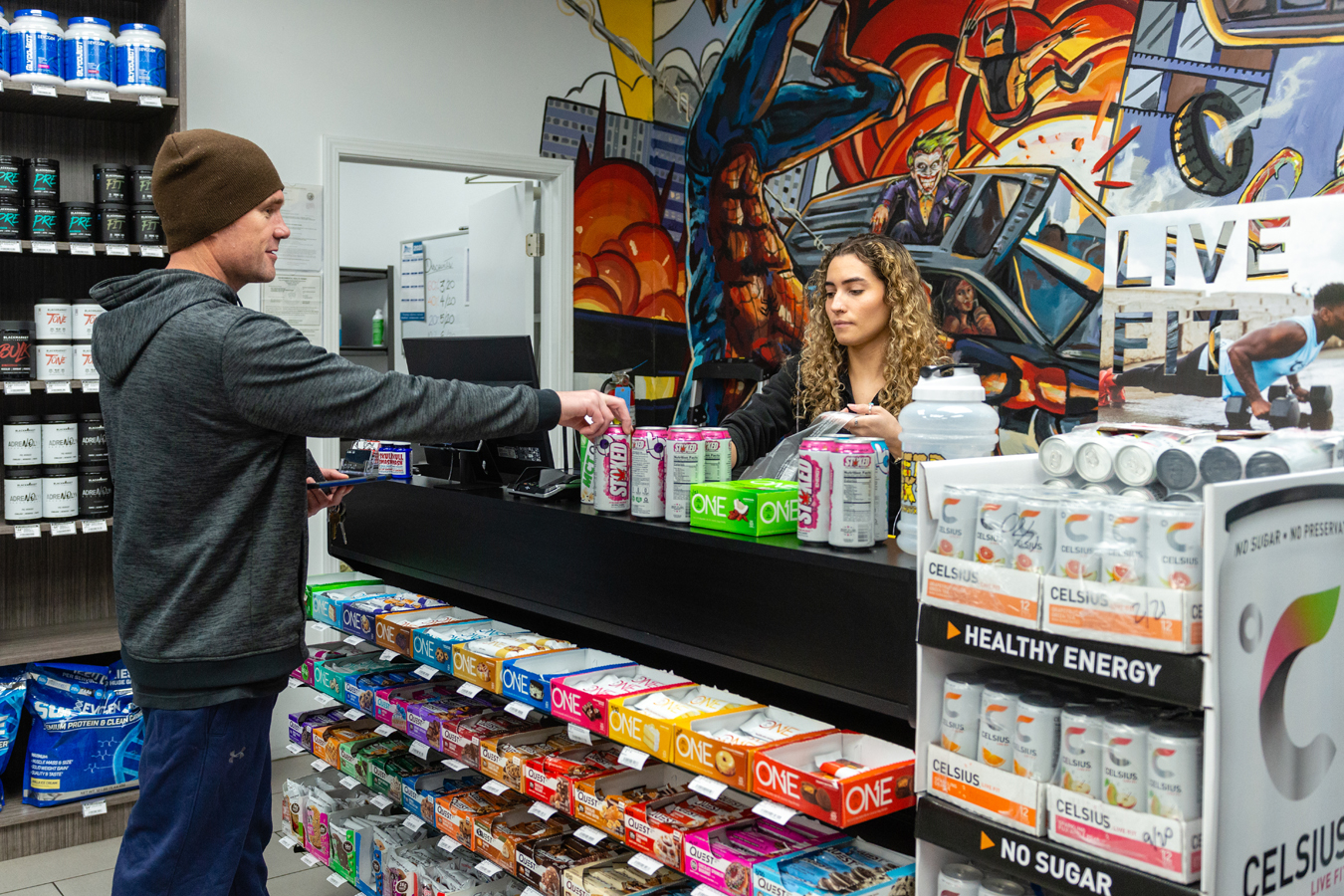 Victoria Garrido, 23, is a sales associate at Get Yok’d Sports Nutrition, a supplement and health food store in Pasadena. Sales have fallen 70% since the stay-at-home orders went into effect, says owner Sarb Derzakarian. With only about 25 customers a day, he says, he doesn’t know how long he can keep the store open. (Heidi de Marco/California Healthline) 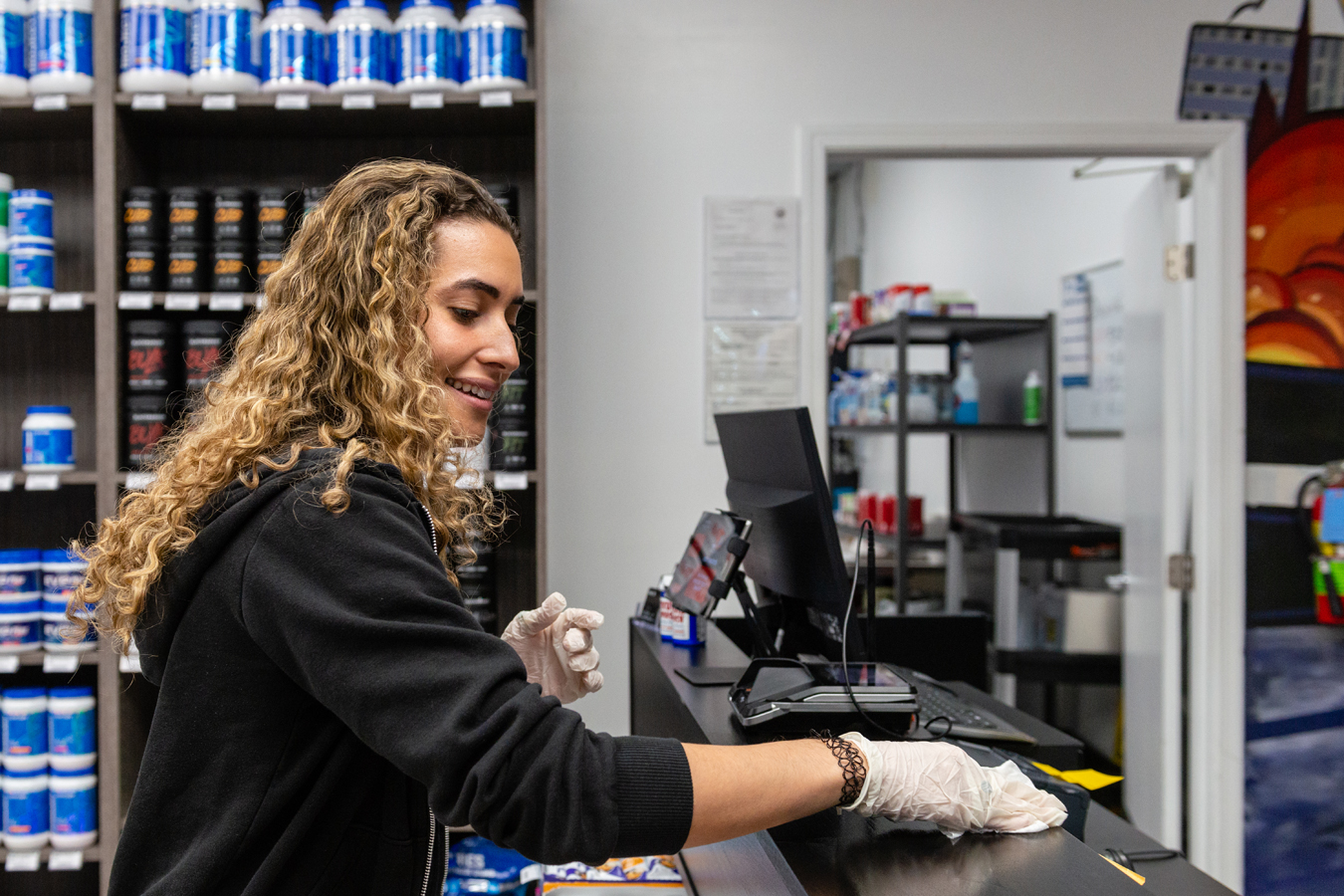 Garrido and other employees disinfect after each customer leaves. Garrido cleans the door handles, credit card machines and anything else the customer has touched. “I want to wear a mask,” says Garrido, “but it’s hard to work like that.” (Heidi de Marco/California Healthline) 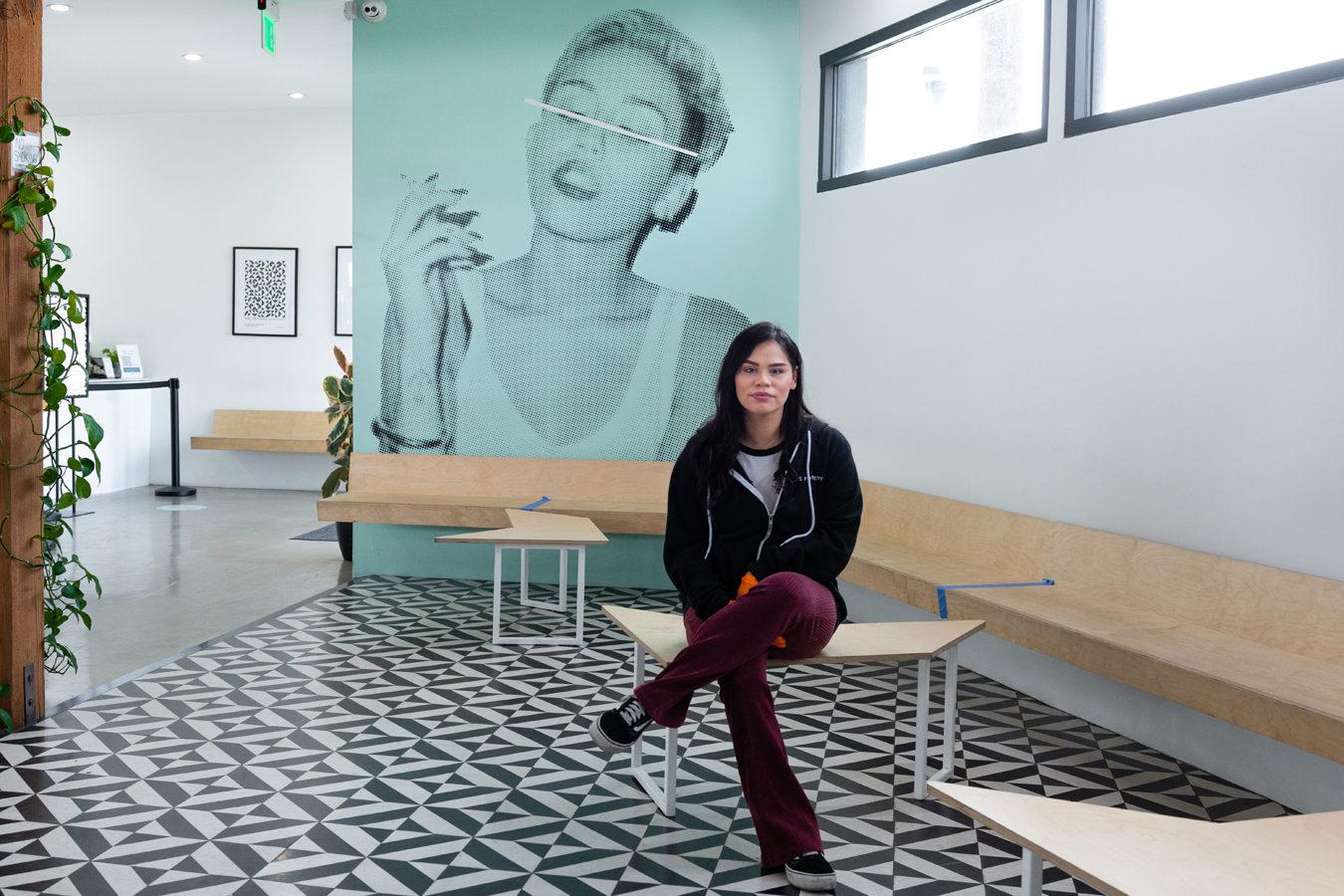 Tommie Ramirez, 29, is a “budtender” at The Pottery, a cannabis dispensary in the Mid-City neighborhood in central Los Angeles. Ramirez wears gloves at work and practices social distancing but worries about bringing the virus home to her elderly parents. (Heidi de Marco/California Healthline) 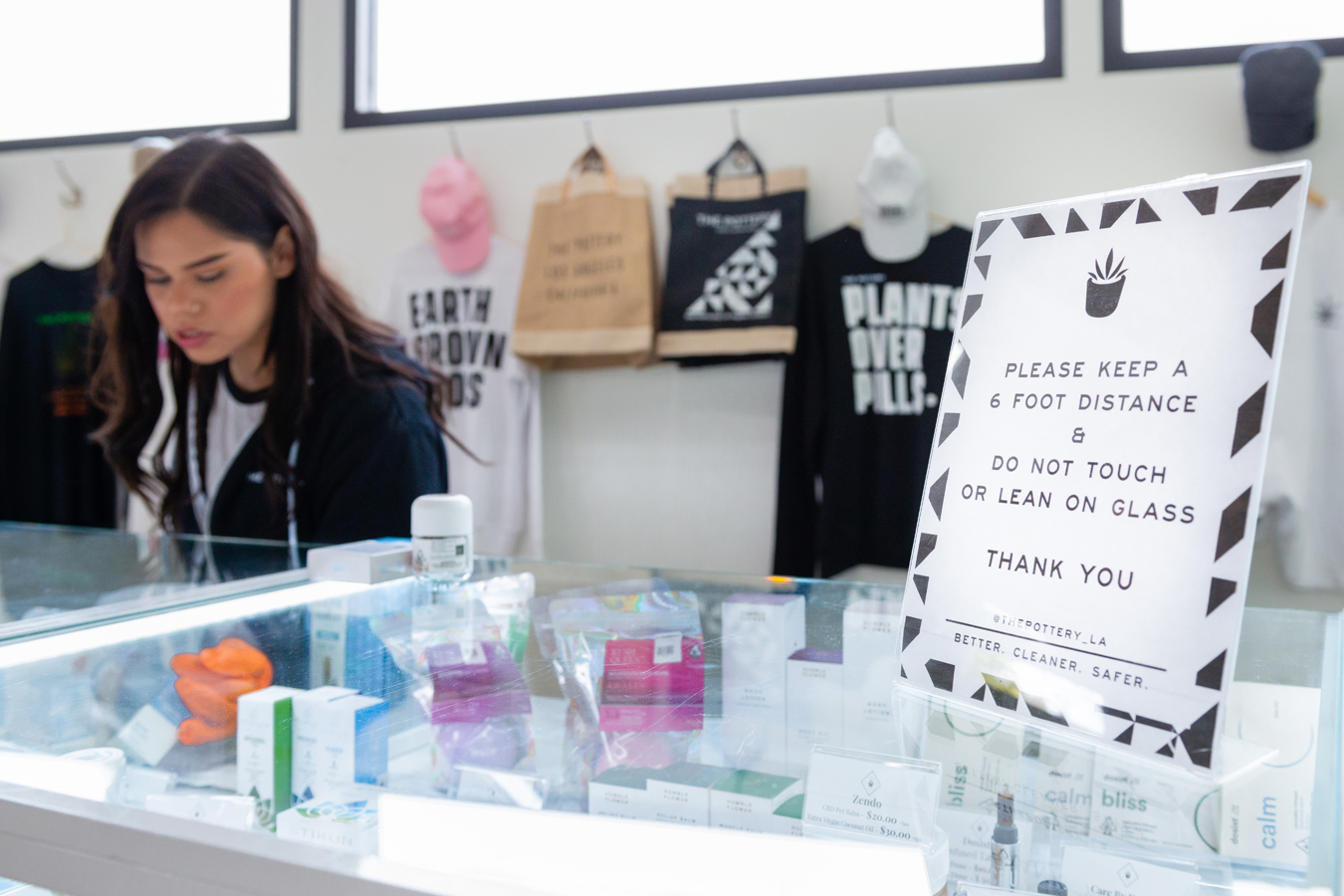 Ramirez grabs a cannabis tincture for a customer. The dispensary has taken precautions to keep employees and customers safe, including placing signs around the shop. (Heidi de Marco/California Healthline)

‘Essential’ Or Not, These Workers Report For Duty