Some large health insurance companies have suffered losses under the Affordable Care Act, leading to a few high-profile exits from the online marketplaces. Humana is just the latest, announcing in January that it will stop offering health insurance on the ACA health exchanges at year’s end.

But the administrators of a smaller, California-based insurer — Molina Healthcare — managed to turn a modest profit in the early years of the 2010 health law and break even in 2016. How did they do it?

“We understood the demographics of the people that we’re serving a little better,” said Dr. J. Mario Molina, CEO of Molina Healthcare, “because we’ve been doing it for so long.”

Despite a disappointing fourth quarter of 2016, Molina remains a fan of the Affordable Care Act overall and hopes Congress will consult with him and other insurers as it debates the health law’s fate.

“It doesn’t need to be scrapped and replaced,” he said. “It needs a tuneup.”

Molina’s business grew out of a network of Southern California medical clinics serving mostly low-income patients that was founded in 1980 by his father, David, also a doctor. Sometimes when his dad’s patients couldn’t pay, they would trade services, or give him items from their homes instead of cash, the younger Molina recalled: a glass decanter, a pipe organ, even a dog.

“My father was old-fashioned,” said the CEO. “He believed doctors had an obligation to take care of patients and that the primary issue was not how they were going to get paid.”

That is what positioned Molina Healthcare to move into the Obamacare marketplaces so smoothly, Mario Molina said — most people who signed up for Obamacare plans represent low-income households.

“It’s a different population most insurance companies haven’t been interested in,” he said.

For example, transportation is an issue for his company’s customers. They often take the bus to medical appointments, he said, so they’d rather see a doctor close to home than at an academic hospital 30 miles away.

“We don’t contract with every hospital and every doctor,” he admitted. “It’s not everyone, but it’s enough so that you can find a doctor and the hospital and the services you need.” His company operates in 12 states and Puerto Rico.

Although some observers have criticized narrow insurance networks for not offering consumers enough choice, especially of medical specialists, having fewer doctors in the Molina Healthcare network has meant lower costs for the company and its customers. That means the health insurance company has been able to earn a modest profit — roughly 1 percent in the first couple years of Obamacare.

Some larger insurers are accustomed to creating health plans for big companies, who often want more doctors and more benefits included, in hopes of attracting and retaining top employees. But plans like that cost more.

He’s accustomed to running a low-cost, low-margin business, while big guys like Humana, Aetna and UnitedHealthcare aren’t. Industry analysts say that’s why some of the big players lost money with Obamacare.

“It’s easier to work up from a low-cost position than it is to work down from a higher-cost position,” said Josh Weisbrod, a health care consultant with Bain & Company. “For an insurer that is used to selling employer plans with rich benefit designs and broad networks, it is difficult for them to transition that to a narrow network of lower-cost providers.” 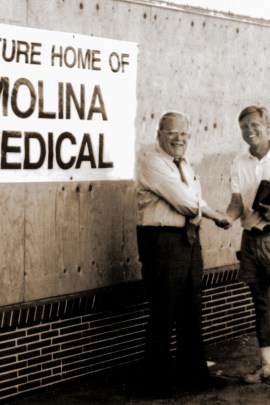 But Molina said there’s been a serious downside to his company’s success: a provision of the Affordable Care Act known as “risk transfer.” The provision was designed to help insurance companies cover losses if they ended up with a lot of very sick, expensive patients. It works like this: Companies with fewer patients who have a chronic or serious illness pay some of their revenue to the companies that cover more patients who are sick.

It was a fine idea, Molina said, but the formula lawmakers came up with to calculate risk was all wrong.

“Let’s put it this way,” he said. “Currently Molina Healthcare is returning 25 percent of our premiums to the government, which are then distributed to our competitors. So we are really subsidizing our competitors and helping them, rather than forcing them to compete.”

And that is one of the things that hit Molina’s bottom line in 2016, resulting in much lower profits than originally projected for the year and a significant fourth quarter loss. Molina complained that the risk formula seems to punish efficiency rather than help those who had some bad luck.

If lawmakers need guidance on how to fix Obamacare, he added, they should look at one state that definitely got it right: California.

California insurance regulators and health officials “forced everyone to really compete,” Molina said, “and that made everyone kind of sharpen their pencils and do a better job,” he said. “It’s kept everyone on their toes, and, as a result, I think there’s been more stability in the marketplace.”

There’s also more predictability. California may have more business regulations than other states, but Molina suggested that has created a level playing field.

“The state doesn’t make arbitrary decisions,” he said. “We can plan from year to year. We understand the rules. Imagine if you’re trying to play a game and the rules change in every quarter.”

Molina expressed hope that newly elected rule makers at the federal level will take his message to heart, too.