President Donald Trump, a self-described germophobe, has made no secret of his disgust with California’s growing homeless problem, which he has called a “disgrace” and “inappropriate” and equated to “living in hell.”

“We should all work together to clean up these hazardous waste and homeless sites before the whole city rots away,” Trump tweeted about San Francisco on Oct. 26. “Very bad and dangerous conditions, also severely impacting the Pacific Ocean and water supply.”

San Francisco officials were quick to dispute Trump’s claims. But some of California’s most prized rivers, beaches and streams are indeed contaminated with levels of fecal bacteria that exceed state limits, threatening kayakers, swimmers — and the state’s reputation as a bastion of environmental protection.

The presence of fecal bacteria in water is usually the result of problems with sewer systems and septic tanks. But water quality officials agree that the source of at least some of the fecal bacteria is California’s growing homeless population, most of whom don’t have reliable access to toilets.

“I’ve carried 5-gallon buckets that were unambiguously being used as toilets,” said David Gibson, executive officer of the San Diego Regional Water Quality Control Board, describing his experience cleaning up homeless encampments. “They were taking it to the San Diego River, dumping it there, and rinsing it out there.”

Fecal contamination of waterways is a widespread problem and becoming more urgent in states with large homeless populations. In Seattle, homeless people living in RVs are accused of dumping raw sewage straight into storm drains, which flows directly to local waterways. In Oregon, workers cleaning up homeless camps along the Willamette River in Eugene routinely find feces and needles.

California has the largest homeless population in the nation, estimated at more than 151,000 people in 2019, according to the U.S. Department of Housing and Urban Development. About 72% of the state’s homeless slept outside or in cars rather than in shelters or temporary housing.

The Trump administration has fixated on California’s homeless population in particular as a potent source of pollution.

In addition to Trump’s tweets, the U.S. Environmental Protection Agency sent a letter to California Gov. Gavin Newsom on Sept. 26 alleging that the state’s lack of urgency on homelessness threatens public health by polluting nearby water with untreated human waste. It then issued a notice to San Francisco accusing it of violating the federal Clean Water Act.

Jared Blumenfeld, secretary of the California Environmental Protection Agency, responded by accusing the federal EPA of retreating on clean water protection, and called the administration’s focus on the environmental impact of homelessness “sensationalized” and “misguided.”

But concerns extend beyond the Trump administration. A record number of Californians — about 1 in 4 — believe homelessness and housing is the top issue facing the state today, up from 1% in 1999, according to the Public Policy Institute of California.

When it comes to water, scientists look for E. coli and other bacteria to determine levels of fecal contamination. While E. coli is present in both human and animal feces, human fecal contamination is particularly dangerous because it can transmit diseases that affect people, including hepatitis A and cholera.

Most people are not at risk of getting sick unless they drink the water, or if pathogens enter open cuts or sores, said Richard Ambrose, a professor in the department of environmental health sciences at UCLA. Homeless people face the highest risk because they are more likely to wash or wade in the water and have less access to toilets and showers, he said. 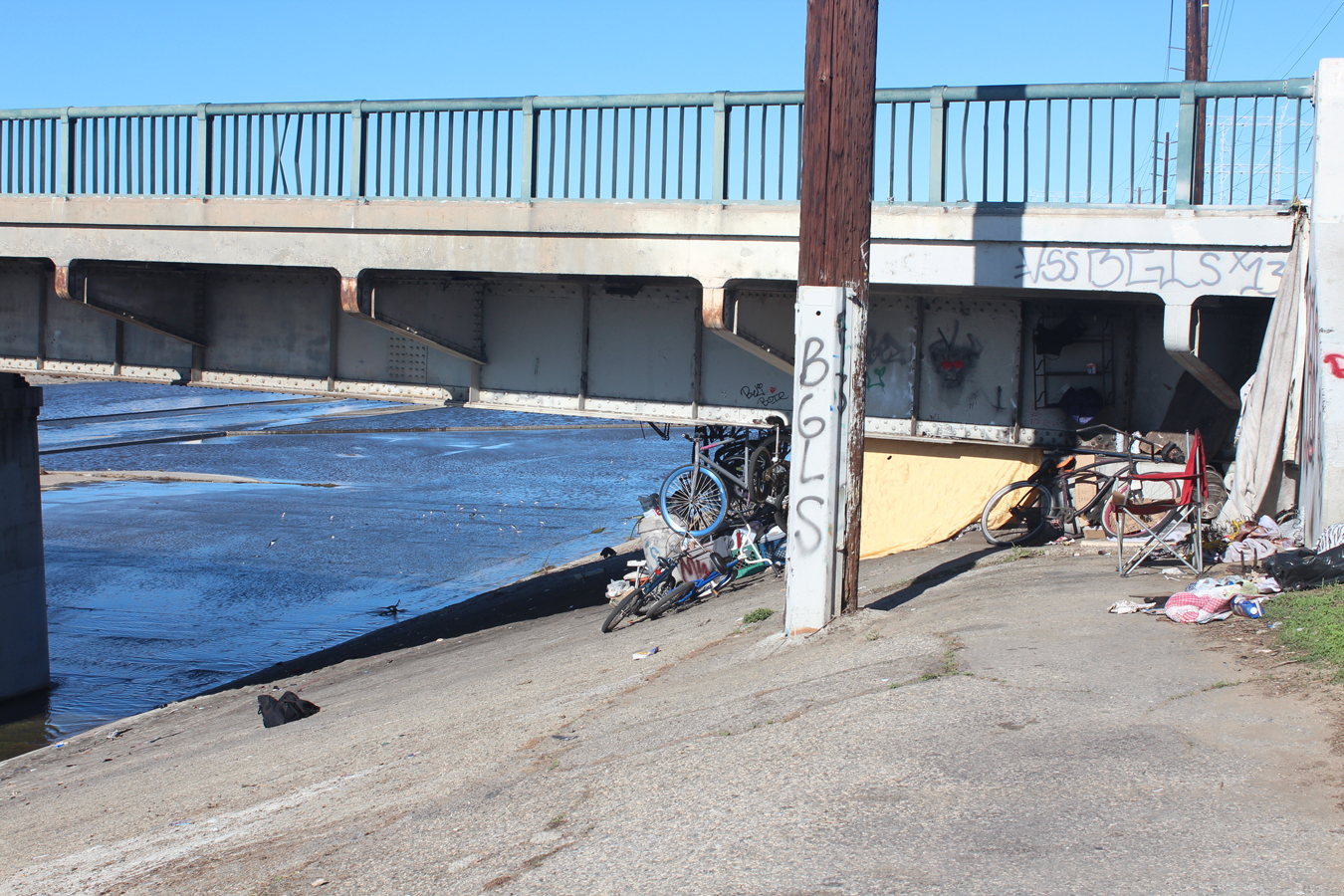 In the city of Vernon, a homeless encampment is hidden under a bridge that crosses the Los Angeles River.(Anna Almendrala/California Healthline)

In the city of San Francisco, Trump’s favorite punching bag on the issue, fecal pollution on the streets gets swept into the storm drains after it rains and is routed to the same treatment plants as toilet water, which means Trump’s claims about the city’s water were inaccurate, officials say.

But that isn’t the case for most of the state’s cities and sewage systems. In San Diego, the state’s second-most populous county, dozens of homeless encampments line the 52-mile-long San Diego River, which flows into the Pacific Ocean. Officials have for decades recorded high levels of fecal bacteria in the river that exceed state standards, Gibson said.

Last year, the regional water board ordered San Diego County, several cities and municipal agencies to determine the source of the contamination. In addition to investigating the condition of leaky sewage infrastructure, which fails when it rains, the order requires municipalities to evaluate how homeless people living on riverbanks, in parking lots, trailers and RVs may be contributing to the problem, Gibson said.

Farther north, in Sacramento, regulators have been measuring elevated fecal bacteria levels in the lower American River for more than three years. Located near downtown Sacramento, it is a popular destination for water sports, even as hundreds of homeless people camp nearby.

Some recreational areas, including Tiscornia Beach, where families picnic, BBQ and wade in the river, had E. coli levels so high in the past year that they hit the upper limits of what the water board’s laboratories could measure — more than seven times higher than the state standard, said Adam Laputz, assistant executive officer of the Central Valley Regional Water Quality Control Board.

The board is conducting a three-year DNA analysis to determine whether the bacteria comes from people, birds or dogs, he said. “That source could be from a sewage collection that’s leaky, or it could be from leaky septic systems,” in addition to homeless encampments, he said.

If the source is human, the water board will embark on a new study to determine whether the source is an infrastructure failure or individuals.

In the San Francisco Bay Area and Southern California, which have the largest homeless populations in the state, some cities conduct routine water monitoring. But the regional water boards, which make key water quality decisions for their regions and take enforcement actions when necessary, aren’t testing to determine if and how homeless encampments affect water quality.

Contamination from homeless camps is so easy to observe — and smell — that there is no “need to monitor to know there’s a problem,” said Thomas Mumley, executive officer of the San Francisco Bay Regional Water Quality Control Board, which stretches from Napa County to Santa Clara County.

If there are no bathrooms in or near a homeless encampment, “we can assume there’s a discharge of waste” where there shouldn’t be, he said.

Bay Area regulators are working with some cities that are conducting pilot projects, such as offering free RV dump stations and providing sanitation services for encampments.

The board could one day require municipalities to adopt such projects or face fines, Mumley said.

“We’re cautious about using that authority,” he said. “We want public dollars going toward solutions, not just paying penalties.”

The Central Coast Water Board has already issued an order to the city of Salinas to map homeless encampments and focus more resources on their sanitation needs. 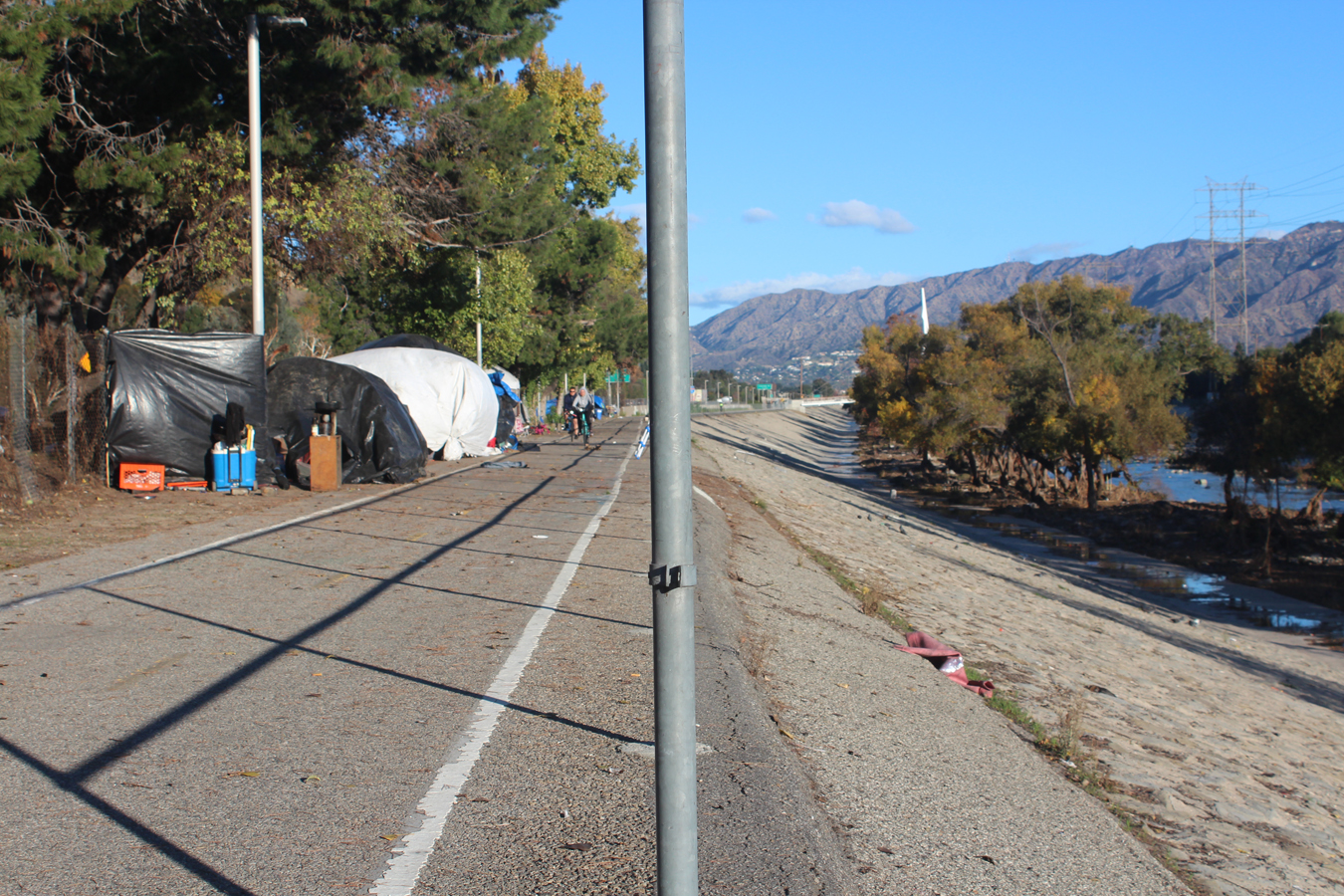 Large plastic tarps protect dilapidated camping tents on one side of the Atwater Village bike path, which runs alongside the Los Angeles River.(Anna Almendrala/California Healthline)

In Los Angeles, hundreds of homeless people camp within the Los Angeles River channel itself and thousands live nearby.

Along a stretch of the river that runs through Atwater Village north of downtown, one man, who called himself P. Dogg and said he had been homeless for three years, said that he bathes in the river when the water is “clear, not murky.”

Asked if he’s ever gotten sick from bathing in the river, he answered proudly: “Never once.”

While local testing of the Los Angeles River, San Gabriel River and the Ventura River Estuary wasn’t designed to measure the effects of homelessness, results suggest there have been significant impacts in some areas due to homeless encampments, said Renee Purdy, executive officer of the Los Angeles Regional Water Quality Control Board.

Purdy is working with area communities that have installed portable toilets and organized trash cleanups with money initially budgeted for water infrastructure maintenance.

“The long-term solution is really to address the societal issue of homelessness,” she said.