Ownership of the Affordable Care Act has officially been transferred from President Barack Obama and Democrats in Congress to President Donald Trump and congressional Republicans, according to a new poll.

In the monthly tracking poll from the Kaiser Family Foundation, 61 percent of respondents said any problems with the law moving forward are the responsibility of Trump and Republicans in Congress, while only 31 percent said future problems are the fault of the Democrats who passed it. (Kaiser Health News, which publishes California Healthline, is an editorially independent project of the foundation.) 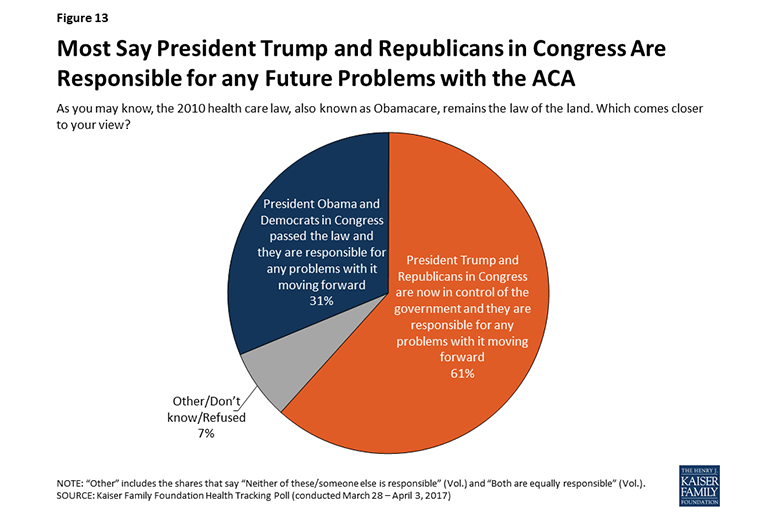 Shortly after the House GOP “repeal-and-replace” bill failed to pass the House last month, Trump said that “the best thing we can do, politically speaking, is let Obamacare explode.” That’s apparently not the case, according to the poll’s respondents. Even a majority of Republicans — 51 percent — say the administration should try to make the law work. That’s also the view of 54 percent of self-identified Trump supporters.

The poll also makes clear why members of the conservative House Freedom Caucus continue to fight for a bill that repeals more of the law.

While 55 percent of all respondents said the GOP health bill failed to pass because “it went too far in cutting existing programs,” a majority of Republicans, 58 percent, said “it didn’t go far enough to end Obamacare.”

And although a plurality of those polled (49 percent) say Trump and congressional Republicans should “stop working on health care and move on to other priorities,” a full three-quarters of Republicans say they should “keep working on a plan to repeal and replace the 2010 health care law.”

The telephone poll — which was conducted March 28 through April 3 — has a margin of error of plus or minus 3 percentage points.

For Better Or Worse, Trump And GOP Now Own Health Care