NEW YORK – The Mount Sinai Hospital emergency room looks and sounds like hundreds of others across the country: Doctors rush through packed hallways; machines beep incessantly; paramedics wheel stretchers in as patients moan in pain.

“It’s like a war zone,” said physician assistant Emmy Cassagnol. “When it gets packed, it’s overwhelming. Our sickest patients are often our geriatric patients, and they get lost in the shuffle.”

But just on the other side of the wall is another, smaller emergency room designed specifically for those elderly patients.

Patients like Hattie Hill, who is 105 years old and still living at home. A caregiver brought her in one rainy day in late spring because she had a leg infection that wasn’t responding to antibiotics. Hill, who also has arthritis and a history of strokes, said she prefers the emergency room for seniors because she gets more attention.

Packed emergency rooms are unpleasant for everyone. But they can be dangerous for elderly patients, many of whom come in with multiple chronic diseases on top of a potentially life-threatening illness or injury.

“Who is going to suffer the most from these crowded conditions?” asked Ula Hwang, associate professor in the emergency medicine and geriatrics departments at the Mount Sinai School of Medicine. “It is going to be the older adult … the poor older patient with dementia lying in the stretcher with a brewing infection that is forgotten about because it’s crazy, chaotic and crowded.”

Seniors who come into traditional emergency rooms are frequently subjected to numerous and sometimes unnecessary tests and procedures, according to research and experts. They stay longer and their diagnoses are less accurate than younger patients. And they are more frequently admitted to the hospital by ER doctors overwhelmed by the constant influx of very sick patients.

“You’ve got this surge of more and more older adults coming to the emergency departments,” said Kevin Biese, co-director of geriatric emergency medicine at the University of North Carolina School of Medicine. “Yet there hasn’t necessarily been this recognition that [they need] different screening, different treatment and they are going to have different outcomes.” 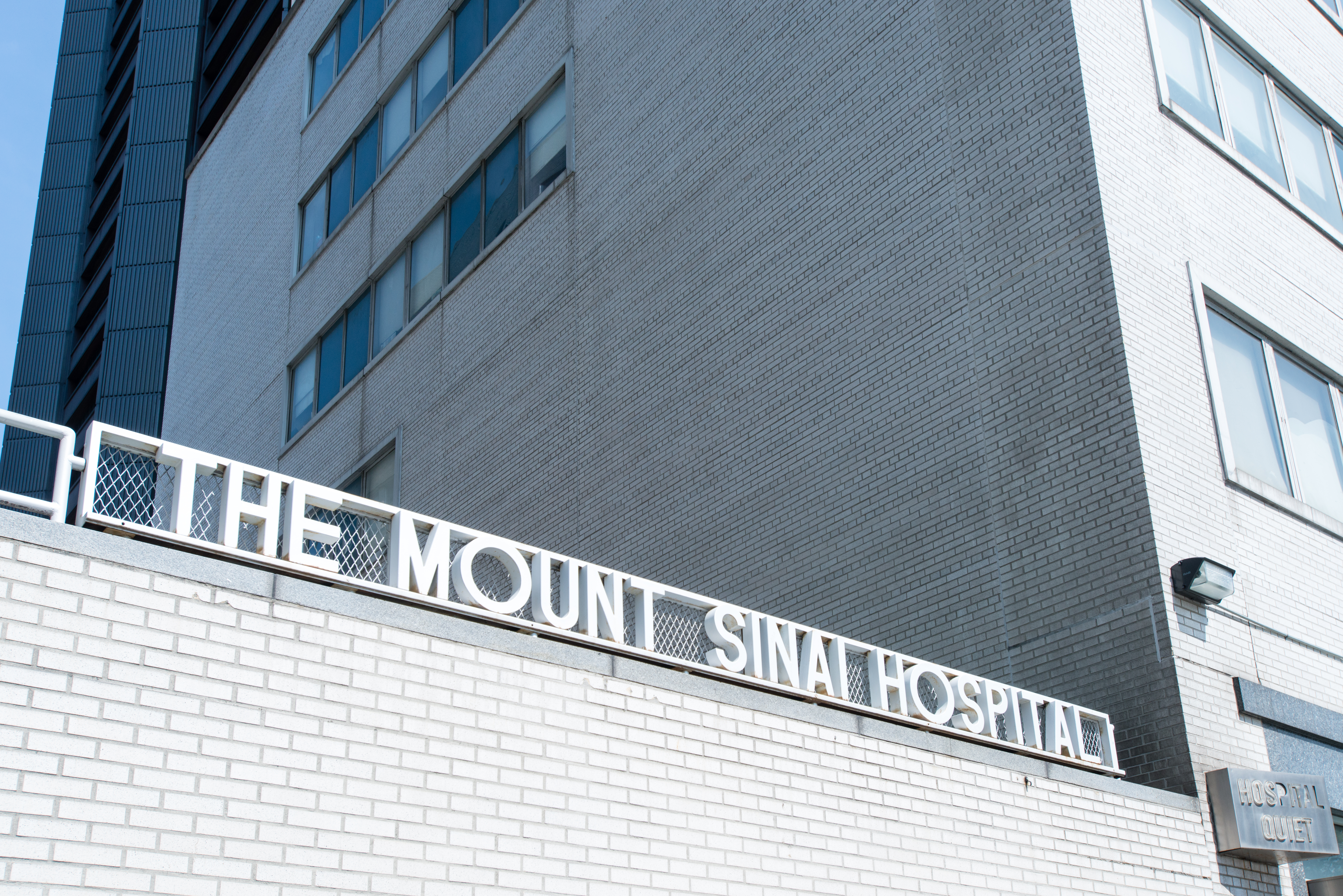 Mount Sinai Hospital, which opened its geriatric emergency room in 2012, is part of a nationwide effort to find a better way to treat elderly patients. (Heidi de Marco/California Healthline)

Geriatric emergency rooms, which are slowly spreading across the country, provide seniors with more expertise from physicians, nurses and others trained specifically to diagnose and care for the elderly, researchers said.

The staff in these specialized ERs collaborate closely not only to treat the seniors’ immediate health problems but also to reduce their risk of confusion, bed sores and over-medication. Senior ERs are designed to be more quiet and tranquil.

Geriatric ERs have the potential to lower health care costs because staff can more carefully discern who needs to be admitted and who can be cared for outside of hospital walls, Hwang and others said. That tends to reduce hospitalizations among the elderly.

Mount Sinai, which opened its geriatric emergency room in 2012, is part of a nationwide effort to find a better way to treat elderly patients. The first geriatric ER opened in New Jersey in 2008, and now there are more than 100 such units nationwide.  Several others are being planned, including in California, North Carolina, Connecticut and Texas.

Geriatric ERs vary widely. Some are separate units with trained staff; others are merely sections within traditional emergency rooms with extra hearing aids and other senior supplies. But professional medical organizations have developed guidelines to standardize design, staffing and patient screening.

The boomlet in geriatric emergency rooms stems in part from an increase in older patients with complex conditions who are seeking care in regular ERs. That has caused some providers and hospitals to seek more effective and efficient ways to treat them.

About 20.4 million patients over the age of 65 were treated in emergency rooms in 2011, up from 15.9 million a decade earlier, according to a national hospital survey conducted by the Centers for Disease Control and Prevention. As the population ages, older patients are expected to make up an increasing share of ER patients.

The Affordable Care Act also has fueled the expansion of senior emergency rooms. The law assesses penalties when too many patients return to a hospital too soon after discharge. Facilities have tried to reduce readmissions in part by providing better emergency care and triage.

Now, that growth could continue as hospitals face additional pressure to provide more efficient and less costly care to their Medicare patients. The Centers for Medicare and Medicaid Services announced in January that within two years, half of all traditional Medicare payments will go to providers based on quality of care rather than quantity of services. 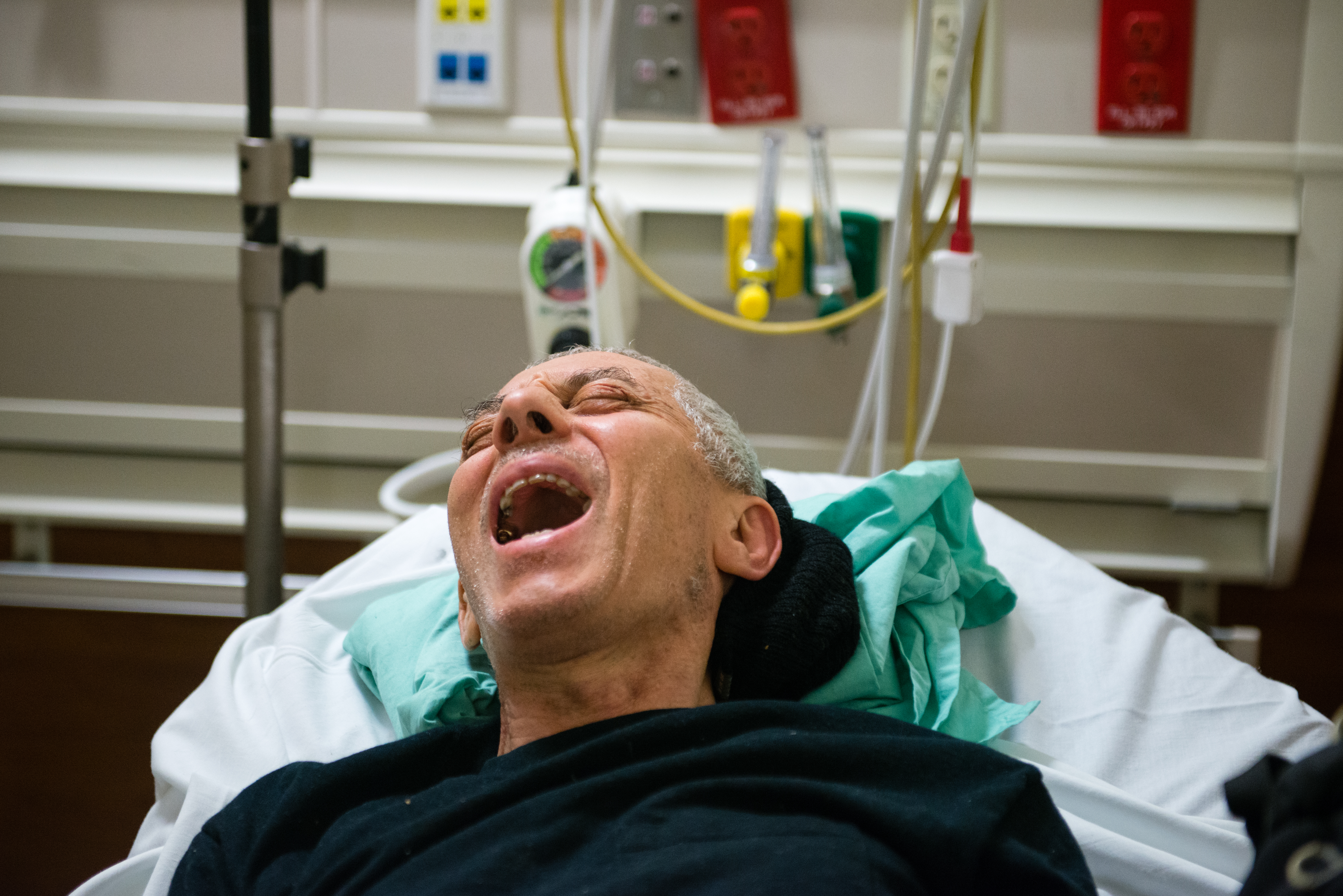 John Fornieri, 80, screams in pain as the doctor puts pressure on his hip. Fornieri, an artist with arthritis and a heart condition, was admitted to the hospital after he lost his balance and fell to the ground. (Heidi de Marco/California Healthline)

Emergency departments are the perfect places to make changes that could help control spending, because they are gateways between home and costly hospitalizations, Hwang said. About 60 percent of elderly patients who get hospitalized come through the emergency room, according to a 2013 Rand Corporation study. A quarter of those hospitalizations are preventable, according to one 2012 federal study.

“Hospitals that before didn’t think there was any need for this are saying, ‘Can you help us create a geriatric ED?’” Hwang said.

The geriatric emergency room at Mount Sinai is set up differently than traditional emergency rooms. It has thicker mattresses to help reduce the chance of bed sores, raised toilet seats, hand rails in the hallways and reduced-noise curtains.

The department is allotted 20 beds, but the main hospital sometimes steals them for other patients. That leaves some older ER patients waiting in the hallway.

Over a two-day period in May, dozens of older patients were treated for falls, dizziness, severe pain and shortness of breath. 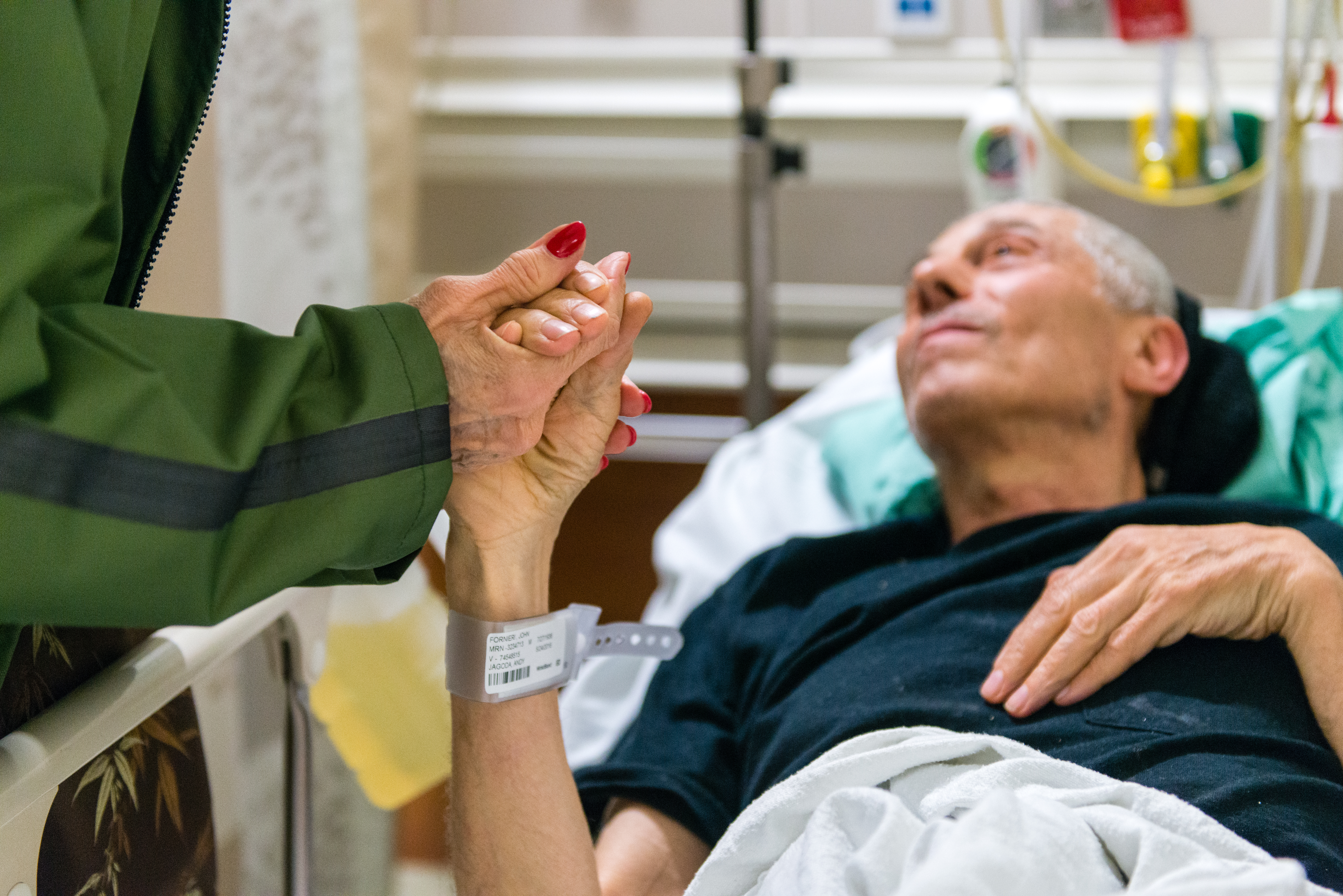 John Fornieri, 80, came in after falling on his floor at home. Fornieri, an artist with arthritis and a heart condition, said he nearly lost consciousness. An x-ray showed he had broken a hip.

Fornieri said he was grateful that the geriatric emergency room staff was trained to care for the elderly. “Seniors need a different kind of attention,” he said. “We can’t see and we can’t hear like we used to. We can’t even talk the same.”

Denise Nassisi, a physician who runs the geriatric ER, said her patients are at greater risk of falling, medication errors and infections than younger patients. Seemingly routine injuries can have devastating effects. Broken arms, for example, can make it difficult for elderly people to care for themselves.

Many also have dementia or other cognitive impairments that make it harder to get an accurate account of their medical history and the reason for their ER visit, she said. About half of the patients arrive unaccompanied by relatives or caregivers.

In the past, Nassisi said, doctors frequently just admitted the patients, leaving it to the hospital staff to do a more complete workup. But now, Nassisi and her team of social workers, therapists, nurses and others try to screen, diagnose and treat patients more thoroughly in the ER, she said. 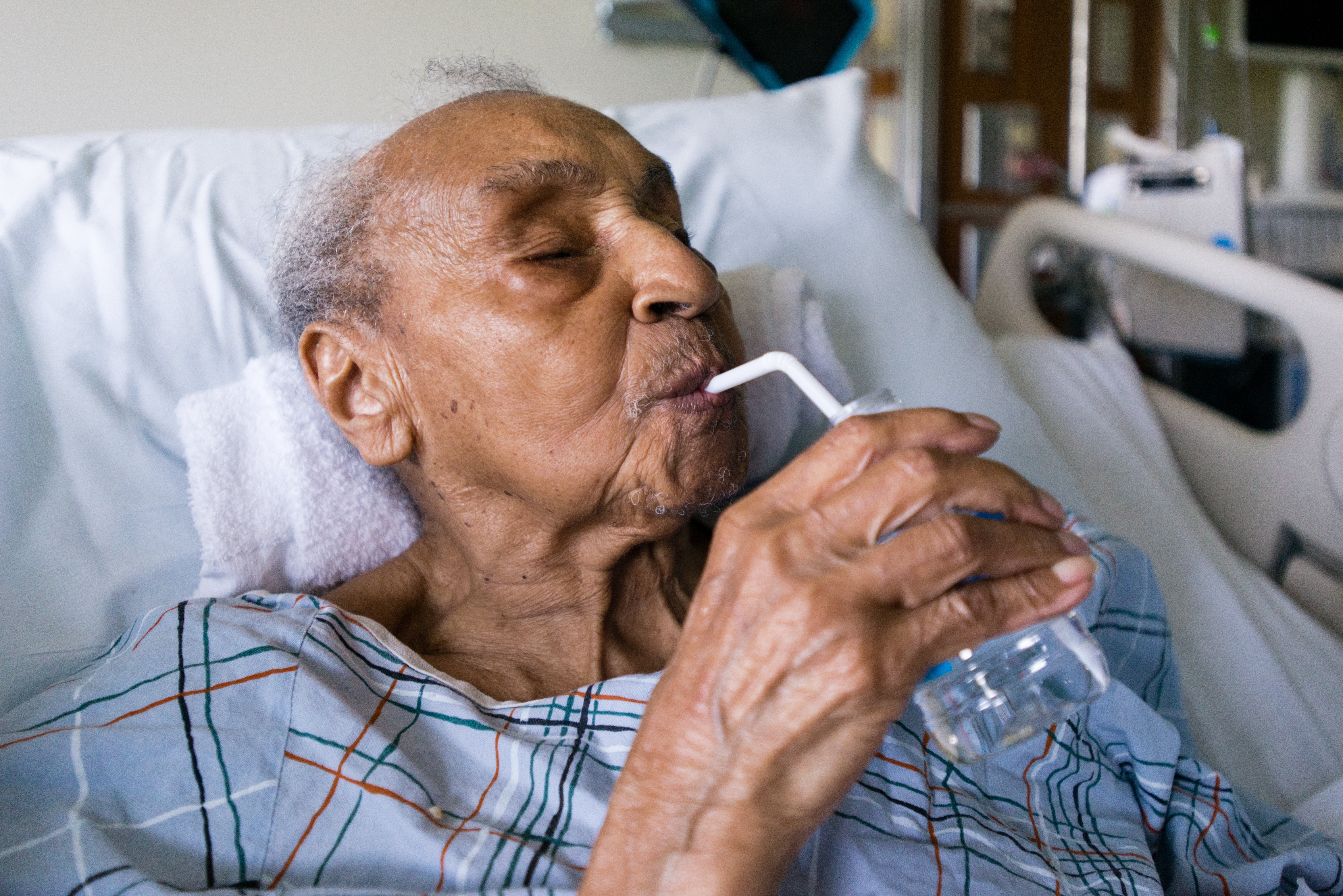 Hattie Hill, 105, who has arthritis and a history of strokes, said she prefers the emergency room for seniors because of the extra attention. (Heidi de Marco/California Healthline)

Part of their job is to determine whether older patients can be safely discharged. That means they aren’t automatically admitted to the hospital, which would raise their risk of confusion and loss of independence. “We are trying to change the culture of just admitting,” Nassisi said.

A patient doesn’t need a clean bill of health to be discharged. One 81-year-old patient came in for a toothache but also had a long list of illnesses: coronary artery disease, chronic pulmonary disease, arthritis, high blood pressure, prediabetes and high cholesterol. She was released with pain medication, antibiotics and an appointment with a surgeon.

Another patient, who was 83 and had high blood pressure, anxiety and cancer, had fallen in her kitchen. She, too, was discharged after staff ensured she could walk on her own and had help at home.

As providers determine where the patients should be treated, they also try to prevent them from becoming delirious, developing additional problems or taking potentially harmful medications.

“How are you doing?” 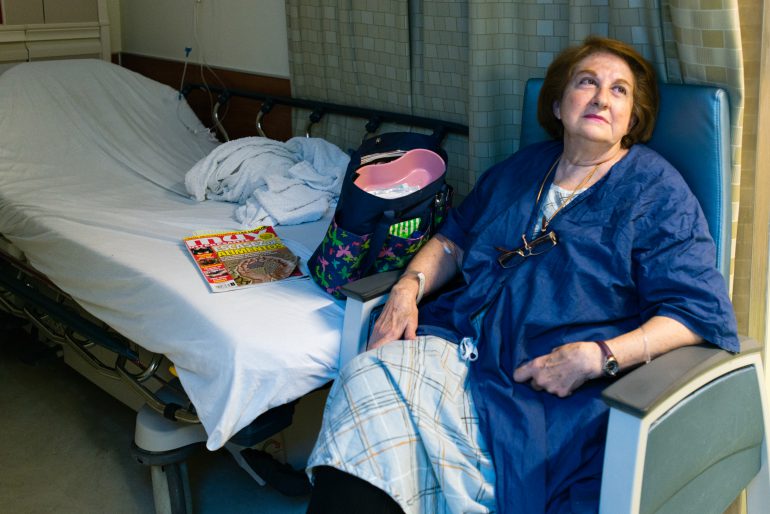 After being seen in the emergency room, Castellanos waits for a hospital bed for further testing. (Heidi de Marco/California Healthline)

Schefkind looked at Hill’s leg, red and swollen. She said they were going to get her some stronger antibiotics and something to relieve the pain.

“Let’s start with Tylenol,” Schefkind said. “I don’t want to give you something too strong because it’s not safe when you’re older.”

Shortly afterward, the team decided the best place to admit Hill so doctors could get her infection under control. A nurse pulled Hill’s blanket up to her chin, packed up her belongings and rolled her through the door toward the main hospital.

This story was reported while its author, Anna Gorman, participated in a fellowship supported by New America Media, the Gerontological Society of America and The Commonwealth Fund.