Michael Callahan, an outgoing 43-year-old carpenter, landed in a Los Angeles County jail last September because of what he said were “bad decisions and selling drugs.”

He had uncontrolled diabetes and high blood pressure when he arrived, but his health was the last thing on his mind. Consumed by a meth addiction, he hadn’t taken his medications for months. “When I got here, I was a wreck,” said Callahan, who is stocky and covered in tattoos. “My legs were so swollen that if I bumped them they would break open.”

By January, however, his diabetes was improving and his blood pressure had dropped. Now, he takes his medications daily and sees a doctor every two months. Even as he counts the days until his release this summer, Callahan knows he is getting much-needed medical care. “I’m where I need to be, not where I want to be,” he said. 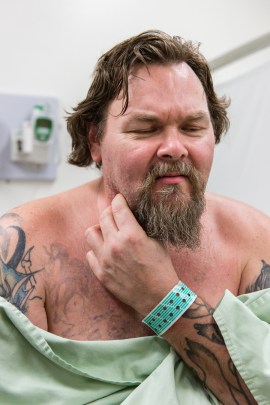 Inmate Michael Callahan, a 43-year-old carpenter, waits to be seen by the clinic doctor at the Los Angeles County jail on Jan. 17, 2018. Callahan said he’s determined to stay sober and to keep monitoring his health. “I’m 43 years old and that’s not the age to be screwing around with diabetes,” he said. (Heidi de Marco/California Healthline)

Callahan’s situation is counterintuitive: He may end up leaving jail healthier than when he arrived. Officials at the Los Angeles County Department of Health Services hope to see more cases like his as they embark on an ambitious effort to improve health care for jail inmates. Their project follows decades of complaints, lawsuits and reports of poor medical and mental health care at the Los Angeles County jails, which house about 18,000 inmates on any given day.

The county’s overhaul is designed to raise the quality of health care behind bars and better equip inmates to manage their health after they are released. But the challenges are enormous — the population is disproportionately sick, and the jails weren’t designed to be medical facilities.

The innovative effort at one of the nation’s biggest jail systems is based on a logical premise: Inmates don’t stay in jail for long — the average stay is just 60 days — so it’s a crucial opportunity to diagnose and begin treating their diseases.

“People are there for just a blip in time, days, weeks, months … and they’re returning back to the community,” said Mark Ghaly, director of community health for the county Department of Health Services. “What happens in the jail matters.”

The county health agency took over medical care in the jails from the LA County Sheriff’s Department in 2015 and started revamping the system in earnest last year.

The main health clinic at the Men’s Central Jail in downtown Los Angeles is located just inside a large metal gate. Inmates there and at all the LA county jails can get a wide variety of medical and behavioral care. “It’s a giant health system and it’s complex,” said Margarita Pereyda, chief medical officer of correctional health services for LA County. “We are a hybrid between a hospital and an ER and an outpatient kind of environment.”

Part of the plan is to make clinics inside the jails more like ones on the outside. That means assigning inmates to primary care doctors to manage their chronic diseases and getting them appointments and medications quickly. It also means expanding treatment for mental health and substance abuse and referring those who need advanced medical or behavioral care to specialists who work for the county.

It’s a monumental job: Nearly half of all inmates have at least one chronic disease, including about 450 who have HIV and 900 with diabetes. About two-thirds of inmates are addicted to drugs or alcohol, and about a quarter have serious mental illnesses.

To improve inmates’ access to care, county officials launched a physician recruitment effort this month. They released a series of online videos featuring medical providers with the slogan “Mission Possible.” As an incentive, they are offering to pay up to $120,000 in medical school debt for each of the new hires who need it. That strategy has been used to lure doctors to low-income communities around the United States.

Esther Lim, who directs the jails project at the American Civil Liberties Union of Southern California, said she is optimistic care will improve, but she still hears daily from inmates about delays in appointments and medications. And, she said, people are still dying inside the LA County jails — an average of 25 each year, according to the health department.

“It’s an indication that there is something wrong, that the delivery of medical care is still poor,” Lim said. Overcrowding can result in inmates’ health being neglected and deteriorating over time, she said. County health officials acknowledge the situation is not going to change overnight. The county is “making some great headway,” but “there are some things that you can change more quickly than others,” said Ed Matzen, clinical nursing director for the jails.

Lello Tesema, a primary care physician and director of population health for the county jails, said many of her patients have gone without care on the outside for a long time. As soon as she gets a new patient, Tesema takes a medical and personal history. Then she creates a plan with the patient, knowing she only has a limited amount of time to implement it.

One early morning in January, Tesema examined Callahan, the carpenter, on an exam table in a room just off a busy corridor around the corner from his dorm-style cell. She said the swelling in his legs had diminished and his blood sugar level was looking good. “We’re moving in the right direction,” she told him. On the way back to his bunk, Callahan stopped at a window to pick up a pill for his diabetes.

Tesema said she worries about the health of her patients after they get out of jail even though they leave with a referral to a county clinic and 30 days’ worth of medication — up from three days in the past. “Often I see patients come back and a lot of the successes that happened while they were here end up diminishing after they leave,” she said. 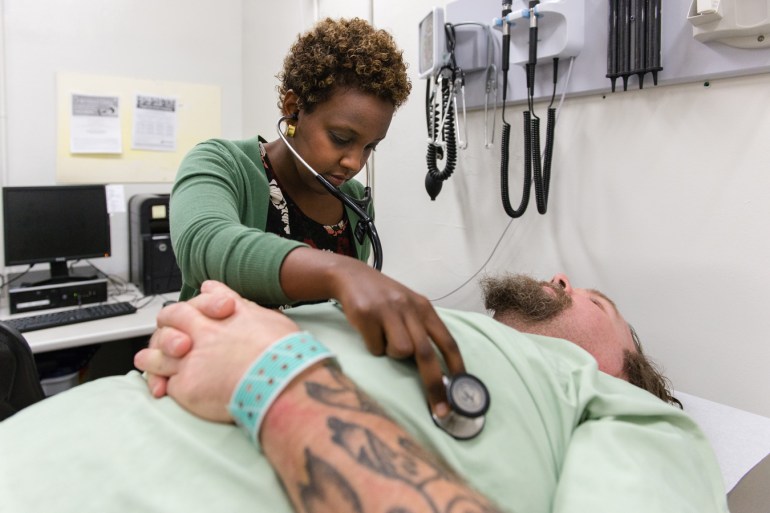 Lello Tesema, a primary care physician and director of population health for the Los Angeles County jails, checks on Callahan who had uncontrolled diabetes and hypertension when he arrived at the jail. (Heidi de Marco/California Healthline) 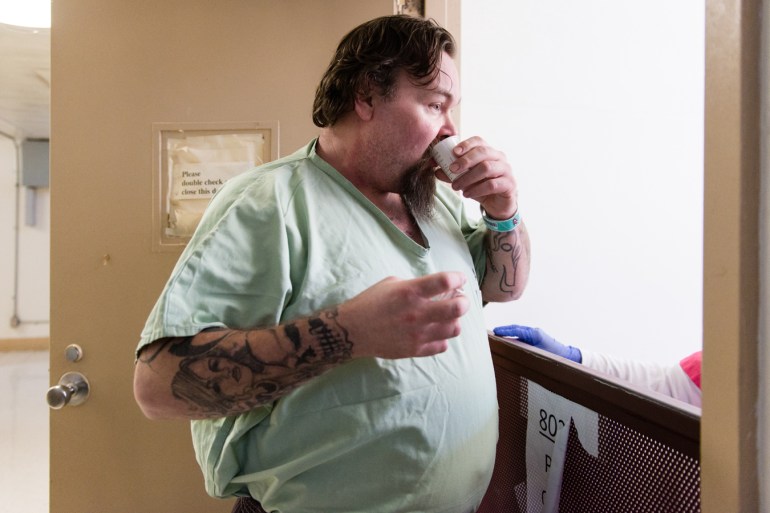 On the way back to his bunk, Callahan stops by a window where he receives a pill for his diabetes. “Taking care of my diabetes here is a lot easier than it was on the streets … because I had other things clouding my mind,” he says. (Heidi de Marco/California Healthline)

Tesema and other medical providers in the jail must manage the inherent tension between safety and medical care. Sometimes, doctors have to see patients in their cells or treat them when they are handcuffed, Tesema said.

Jason Wolak, a captain in the medical services bureau of the Sheriff’s Department, said deputies are making an effort to get more inmates to medical appointments. “We’re the Uber for medical,” he said. He added that the Sheriff’s Department needs more staff, especially for transporting inmates to outside specialists or to the county-run hospitals.

Since patients also are going to court, attending classes or meeting with their lawyers, scheduling medical visits can be a challenge, Ghaly said. “There’s a high no-show rate to appointments.”

Pereyda said the new system for providing care at the jails depends on current doctors changing their mindset — things as simple as calling people patients rather than inmates.

“We can figure out the logistics and we can figure out the resources, but shifting the way people think and act is going to be our biggest challenge,” she said. Hiring new doctors who believe in the mission of health care behind bars will help, she added.

Among some inmates, attitudes about their own health are already beginning to shift.

Callahan said he’s determined to stay sober and continue monitoring his health when he gets out. “I’m 43 years old and that’s not the age to be screwing around with diabetes,” he said.