Lloyd Dean’s hospitals treat more than 5 million Californians per year. And he has a vision for how they’ll get their care in the future — whether at work, on vacation, or in another state altogether.

“Wherever you go in this country, you have Dignity with you,” Dean, the CEO of Dignity Health, said in an interview last year.

Historically, Dean’s comment might have signaled that Dignity, a California-based system of about 40 hospitals, was going to follow the approach of HCA or Ascension — two hospital organizations that grew from regional to national health systems through a series of mergers and acquisitions.

But Dignity isn’t merging its way to new markets just yet. Instead, the health system is looking for other ways to build its relationships, and last week agreed to a joint venture in Arizona with Ascension Health and Tenet.

That deal was notable because all three organizations already are among the nation’s largest hospital systems. But it was especially telling because each system is taking part in a new wave of dealmaking — non-merger-mergers, for lack of a better term.

“And they’re all related to market forces, some of which are attributable to the Affordable Care Act.”

Mergers on the March

For decades, hospital administrators have perceived mergers as the preferred way to achieve size, scale and bargaining power with payers. And in a nation of 5,000 or so hospitals, there’s always going to be lots of dealmaking; thanks to a steady stream of acquisitions, more than 60% of the nation’s hospitals are now part of larger hospital systems.

But there’s been a marked uptick in hospital M&A since Obamacare’s passage, with total mergers rising from 50 deals in 2009 to more than 100 in 2012. 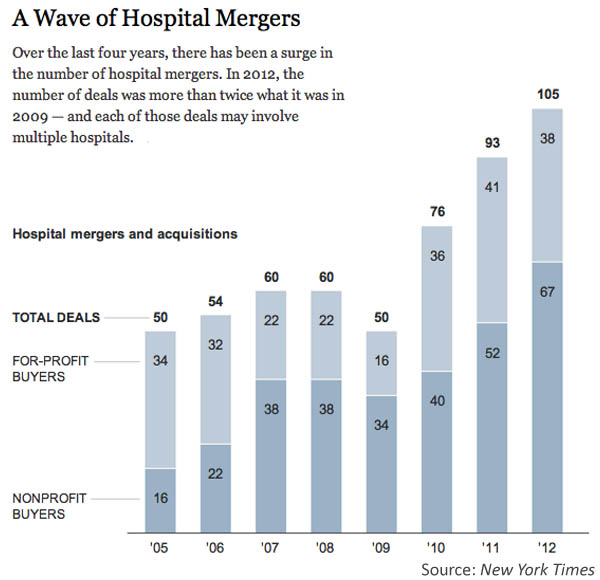 Hospital Mergers Are Out. ‘Strategic Alliances’ Are In. Is Obamacare Responsible?

That uptick is partly because of the ACA’s incentives to provide better care at broader scale. For instance, the law’s provisions encourage health systems to move into providing “population health,” which involves assuming more control over how patients are treated across the health care continuum, and generally requires a larger network and more alignment with other providers.

The surge in dealmaking also may reflect the lingering effects of the recession, which pressured some hospitals into finding stronger partners that could help keep them afloat.

However, the Federal Trade Commission has ramped up its scrutiny of the competitive effects of these deals. (See this “Road to Reform” column on the tension between integration and competition.)

“We want to let the markets do what they’re supposed to do and produce the best outcomes for consumers,” Martin Gaynor, director of FTC’s Bureau of Economics, told California Healthline. As such regulators are picking their battles carefully, Gaynor stressed; of hospitals’ 100-plus deals per year, the FTC has scrutinized only a small handful of them.

New Deals Are Focused on ‘Quality’

Still, hospital administrators have stressed that there’s a chilling effect from the FTC’s scrutiny; even a single high-profile ruling against the industry can cause them to think twice about traditional approaches to consolidation.

And that’s one reason hospitals are seeking out partnerships that aren’t mergers per se, but involve coming together to share knowledge, assets or branding, rather than sharing ownership — which can have important legal implications.

For example, Tenet has teamed up with Yale New Haven to explore building new clinical networks in the Northeast. On the surface, the two systems may be unlikely allies; Yale’s a regional academic medical center, while Tenet is a for-profit hospital system with national scope. But the organizations say that’s why they complement one another: Yale can provide clinical expertise, while Tenet brings its deep pockets to help with potential acquisitions. (And because Tenet’s not allowed to develop clinical networks under Connecticut law barring for-profits, the partnership with Yale offers another way in.)

A similar strategy of partnerships between AMCs and for-profit organizations has emerged in North Carolina (where Duke and LifePoint have formed a joint venture) and Ohio (where Cleveland Clinic and Community Health Systems have done the same).

When it comes to these new deals, “the FTC should be standing up and cheering,” Hatton told California Healthline.

“What you’re seeing is a way for Centers of Excellence and other institutions to find ways to share [their] expertise,” Hatton added.

“These are very interesting developments indeed,” Gaynor acknowledged, especially “if health care providers are finding [ways] to come together and coordinate and offer better care for lower cost.”

But Gaynor stressed that the FTC takes each case matter-by-matter, and it’s too soon to know exactly how these new alliances will play out.

That gets to a major unanswered question: Will this slew of new partnerships, joint ventures, and other innovative deals end up helping patients?

Cleveland Clinic, for instance, has said that its new cardiac affiliations have helped improve performance for the system’s partners. But there hasn’t been much, if any, research done on whether a “quality alliance” actually ends up raising quality.

Still, Hatton is among those who believe that bringing more organizations together will end up as a positive, getting to the Affordable Care Act’s goal of health system improvement.

Pointing to the new Kaiser-Hopkins deal, she says it’s an example of two industry leaders teaming up to try and share their expertise, knowledge, and experience.

“I think that’s an enormously fabulous [development],” Hatton added. “Although I guess that’s in part because my husband is a Kaiser patient.”

Here’s a look at other stories making news on the road to reform.

Documents disprove the case for ‘Halbig’: The Washington Post‘s Greg Sargent argues that the ACA always intended to provide subsidies in all states, explaining how a drafting error gave rise to the lawsuit behind Halbig v. Burwell.

‘Narrow networks’ continue to rankle: Julie Appleby of Kaiser Health News reviews the financial motivations behind insurers’ decisions to limit the number of providers in their plans, and how patients are pushing back. (“Road to Reform” recently took a deep look at narrow networks, explaining why they might be a good thing and discussing the emerging lawsuits against them.)

Medicare spending projections dialed back: At the New York Times “The Upshot” blog, Margot Sanger-Katz reviews how the latest estimates of projected Medicare spending are wrapped up in a bigger mystery: the broad slowdown in health care spending.

Hospital Mergers Are Out. ‘Strategic Alliances’ Are In. Is Obamacare Responsible?