An 11-year-old statewide effort to expand mental health services with a tax on high incomes is helping many people, but there’s not enough hard data to measure the overall impact of the billions of dollars raised so far, members of an independent state watchdog agency said Thursday.

More work is needed to overcome problems of communication, reporting and oversight in order to assemble a clear picture of how the money’s spent. That, anyway, was the consensus reached at Thursday’s hearing before the Little Hoover Commission, most of whose members are appointed by the governor and the legislature.

Known as the Mental Health Services Act — or Proposition 63 — the program was approved by California voters in 2004. It imposes a 1 percent tax on incomes of $1 million or more to fund county mental health programs. It has raised $13 billion so far.

The money has been used to fund services to treat and assist people suffering from a mental illness or those at risk of developing one — including trauma recovery, crisis stabilization, early intervention and housing.

But beyond anecdotal examples, there is no common data pool to show how the money raised is being spent and if it is making a dent in the state’s mental health crisis, according to the commission.

Toby Ewing, executive director of a separate commission that oversees the Mental Health Services Act, said the main problem is the way the information is being collected: county by county, each formatting and reporting the data in a different way. 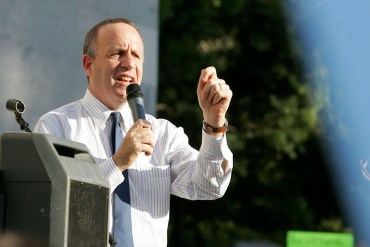 Darrell Steinberg, former president pro tempore of the state Senate, was a coauthor of the Mental Health Services Act. (Kelly Huston via Flickr)

Ewing said his agency is trying to determine the outcomes of crisis service programs funded by the measure. The agency has heard positive news, and they’ve heard about children unable to get care when they need it. But with no common data pool, it’s hard to quantify.

More than a decade after the measure took effect, there are still county supervisors who are confused about how it works, Ewing said. His commission, he added, plans to create a master spreadsheet to track what is happening in every county.

Initiative supporters told the commission they agreed improvement is needed in data gathering and coordination, but the merits of the measure are undeniable.

“Where would we be without Prop 63?” asked Darrell Steinberg, former president pro tempore of the state Senate, who coauthored the initiative. “Maybe we’d have some pilot programs, but not what we have now.”