About Road to Reform

Road to Reform updates federal and state efforts to overhaul the nation's health care system, focusing on key milestones, the politics and the players, and the roadblocks that remain.

It was intended to lower costs. (Debatable.)

But has it improved health care quality — the third element of the “Triple Aim” at the heart of reform?

This is “exactly the right question,” says Harold Pollack, a professor at the University of Chicago. But “it’s [going to be] hard to pull out an answer.”

Is it too soon?

The ACA was signed into law 1,501 days ago — and in some ways, four years is a political eternity.

But it can take a decade or more for a health policy’s effects to really materialize and inflect long-term health outcomes — and that’s before acknowledging that the ACA’s drawn-out implementation has stretched out its effects, too.

For millions of Americans, the law’s massive coverage expansion only kicked in four months ago. Hundreds of hospitals have signed up for the ACA’s signature accountable care organizations, but thousands more are still sitting on the sidelines, given that the program is voluntary.

And some of Obamacare’s most far-reaching, if overlooked provisions — the Patient Centered Outcomes Research Institute’s comparative effectiveness work, or the care delivery reforms being spun up by Medicare’s innovation center, for instance — will take years to pay off.

… Or Should We Start Looking?

But the ACA’s raft of provisions also includes many reforms that have gone into effect, and presumably, could already have led to improvements in care quality.

Under the law’s insurance market reforms, for example, many chronically ill Americans no longer face exclusions or rescissions from health plans. They also had opportunities to sign-up for high-risk pools to get immediate coverage, even if the pools themselves were under-subscribed.

And in several states, the ACA’s Medicaid expansion actually began years ago; more than 600,000 Californians signed up through the Low-Income Health Plan.

Obamacare also has introduced a handful of new pay-for-performance measures into Medicare, such as penalties for readmissions, that already appear to be working. For the first time in years, readmissions rates appear to be falling. That’s possibly because the threat of penalties spurred hospitals to institute new programs — like home care visits and free medication — that seem to have translated into lower all-cause readmissions.

The CMS map below tracks the percentage point change in Medicare readmission rates by hospital referral region, between January and August 2013 compared to the average across the 2007-2011 period. 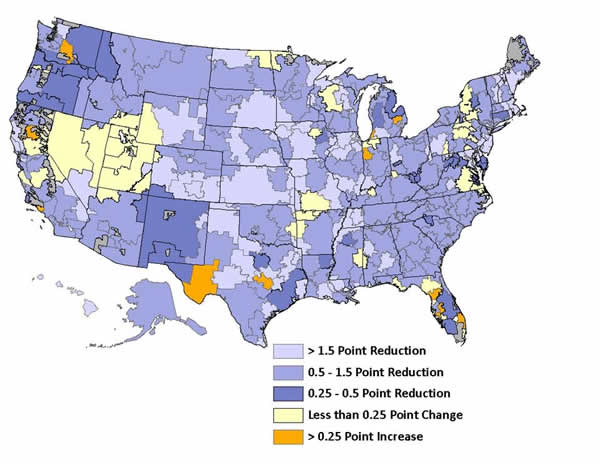 It’s Been Four Years. Has Obamacare Improved Health Care Yet?

Lessons From Oregon: What We Should Be Watching

Experts say that the real health benefits of the ACA may not be seen until millions of previously uninsured Americans have been able to take advantage of the law’s massive expansion of Medicaid.

But there’s serious debate over whether coverage expansions can lead to measurable improvements in health outcomes.

“We’ve never shown in any [randomized study] that we’ve ever improved health behaviors by giving health insurance” to the uninsured, Pollack says.

Baicker’s in a position to provide an answer; she’s one of the authors of the Oregon Health Insurance Experiment, the landmark randomized trial into how expanding Medicaid coverage affects enrollees’ lives. (Back in 2011, “Road to Reform” took a close look at how the study could shape policy debate.)

And she agrees that the findings from Oregon — which both defenders and critics of the ACA wield as seeming evidence of their arguments — are inconclusive about the law’s potential effects.

If there’s “one takeaway,” Baicker tells California Healthline, it’s that “the study should urge real caution in our ability to use [coverage expansion] to affect chronic disease management.”

Baicker did take care to point out a distinction in how expanding access to care could shape patients’ lives.

There’s an important caveat when examining the Oregon study: Researchers tracked coverage expansion in 2008 — before the state switched over to the coordinated care organizations that resemble the ACA’s own ACOs. As a result, providers may not have had the same incentives to focus on newly covered patients with chronic disease and ensure that they were receiving ongoing care management.

Examining the ACA’s Design: Was the Law Actually Focused on Health?

When thinking about Obamacare’s potential effects on health quality, there’s another wrinkle, too.

Was the ACA optimally designed to improve Americans’ health?

A few experts don’t think so.

“The ACA nipped around the margins at [things] that relate to health outcomes,” says Tevi Troy, a former deputy secretary of HHS and Romney campaign adviser who is now president of the American Health Policy Institute.

“The political decisions that drove the creation of the bill led to a design that wasn’t really focused on health outcomes,” Troy tells California Healthline.

That said, the readmissions improvements are notable and worth celebrating, he adds.

“The law is not set up to optimally do anything” on care quality, Duke’s Don Taylor agreed via email to California Healthline. “It is a kick of the ball down the field, and we need to pay close attention to results and figure out what to do next.”

“It is unclear what an optimal approach would be. We need as much data and evaluation as possible to inform mid-course corrections,” Taylor added.

When Will We Know if ACA is Improving Care?

Baicker thinks that within a year, we could start looking for “proxy measures” that get to potential improvement in health outcomes. For instance, if the number of eye exams for diabetic patients goes up or more patients start using blood pressure medication.

But Pollack warns that we might never know for sure.

Even years from now, “it’ll be really hard to tease out the impact of ACA,” says Pollack. The health law “is basically the bumper sticker in this really seismic shift in how health care is delivered,” he adds. “And many of the things that are happening [might] have been happening whether or not the ACA would be passed.”

Why did some uninsured fail to sign up for coverage through the ACA? The number one reason, per a new Kaiser Family Foundation survey: They thought they couldn’t afford it, Jeffrey Young notes at the Huffington Post.

Road to Reform The Health Law

It’s Been Four Years. Has Obamacare Improved Health Care Yet?