Even as the cost of EpiPens dramatically rose, so too did the number of prescriptions written for patients in Medicare, sending spending by the program skyrocketing nearly 1,100 percent from 2007 to 2014, a new report shows.

During the same period, the total number of Medicare beneficiaries using EpiPens climbed 164 percent, from nearly 80,000 users in 2007 to more than 211,000 in 2014, according to the analysis by the Kaiser Family Foundation. While the report does not delve into what’s behind the increase, factors could include increased awareness among people with allergies, marketing efforts and access to insurance coverage.

The abrupt rise is notable because many people think that life-threatening allergies are less common among the elderly. In addition, epinephrine — the active ingredient in EpiPens — can pose greater risks to older adults. Food and Drug Administration labeling urges caution when prescribing to this age group.

“That level of increase gives me pause,” said Martha Twaddle, senior medical officer for Illinois at Aspire Health, which provides home-based supportive care for people with serious illness.  She did not work on the study. Epinephrine — the active ingredient in EpiPens — can cause side effects including chest pain, rapid increase in blood pressure or irregular heart rhythms, which could be fatal, for people with certain medical conditions, including heart disease.

The foundation study comes amid ongoing scrutiny — including congressional testimony Wednesday by Mylan CEO Heather Bresch — over EpiPen price increases. (California Healthline is produced by Kaiser Health News, which is an editorially independent program of the Foundation.) 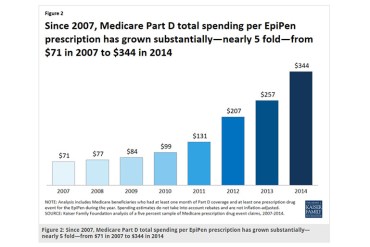 EpiPens are used in cases of severe allergic reactions. Costs for a two-pack of the pens has gone from about $94 in January 2007 to $609 in May of this year. In response to criticism of its price increase, Mylan announced in late August that it would make a generic version and price it at half of its current brand name price.

The new numbers from Medicare could add fuel to the debate over these price increases and voters’ demands that Congress take action to roll back the cost of the popular medication.

The health insurance program for senior citizens and disabled people spent about $6.4 million on the devices in 2007, but spent $75.3 million in 2014, with sharp price hikes by the manufacturer driving much of the increase. Those figures reduce the amount spent based on estimates of how much Medicare saved in rebates from manufacturers, although the agency would not disclose the exact amounts.

All patients with suspected severe allergic reactions — even the elderly — are given either a prescription or an actual epinephrine auto injector upon discharge, he said.

“We tell them to have it and use it if they have a lip or tongue swelling, shortness of breath, a skin rash [or other symptoms] of a problem,” said Glatter, adding that adults tend to become more susceptible to food allergies as they age.

Increased awareness among doctors and patients about the importance of epinephrine could account for some of the increase seen in the study, said Richard Lockey, a past president of both the World Allergy Organization and the American Academy of Allergy, Asthma & Immunology.

“Most people survive an allergic reaction … the people who don’t survive are those who don’t get epinephrine or don’t get it soon enough,” said Lockey, who says it is necessary to balance this idea with the possible risks epinephrine poses for older patients. “It’s a matter of clinical judgment.”

Although Medicare is generally thought of as the government health program for older people, about 16 percent — or 9.1 million beneficiaries — are younger than 65. They are generally disabled or have kidney problems requiring dialysis. According to foundation researchers, although the majority of users were older than 65, a disproportionate share – 35 percent — of the EpiPen users were younger than 65. Additionally, 26 percent were between 65 and 69. Use fell off with age, with only 15 percent of the users being between ages 75-85.

“You can come up with a ton of reasons why the under-65 population might see an increase in EpiPen use,” said James Goodwin, an expert in geriatric medicine at the University of Texas Medical Branch in Galveston. He did not work on the study.

As for the overall increase, Goodwin said there are likely many factors and it isn’t necessarily evidence of overutilization. Still, Goodwin says he specializes in patients older than age 80 and has never prescribed an EpiPen, nor had three of his colleagues, who work with slightly younger elderly patients.

One geriatrician said he has patients who are on it with prescriptions from their allergists, who weigh the pros and cons of having the drug. Those physicians “are the ones to say your allergy is serious enough to potentially become life threatening.”

At the American Geriatrics Society, epinephrine is not included on the organization’s list of potentially inappropriate medicines, said Nicole Brandt, a professor at the School of Pharmacy at the University of Maryland.

“When you look at in context of someone having a severe anaphylactic reaction, which is life threatening, you want access to treatment,” said Brandt. She said doctors should caution patients about the appropriate use of the devices and encourage them to seek additional medical attention if they experience side effects.

She suggested the increase in Medicare prescriptions seen in the study reflects access to insurance more than overuse.

Since Medicare drug plans cover part of enrollees’ total drug costs, beneficiaries in prescription drug plans pay less that the full retail price. But beneficiaries still paid significantly more of their own money for EpiPens during the seven-year period studied in the report. Average out-of-pocket spending for beneficiaries with Medicare drug coverage nearly doubled for each EpiPen, from $30 to $56. The report does not include price increases beyond 2014.

Still, those costs are far less than what some people with private insurance might pay, particularly those with high deductibles. As a result, at least one doctor — geriatrician David Barile from Princeton, New Jersey, who did not work on the study — speculated that the rise in Medicare use of EpiPens might simply be older people getting them for their grandchildren.

Liz Szabo contributed to this report.

It’s Not Just For Kids: Medicare EpiPen Spending Up 1,100 Percent