Skip to content
This story also ran on Los Angeles Times. This story can be republished for free (details).

COVID-19 is disrupting just about every student’s 2020 education, but medical students have it particularly hard right now.

“It’s a nightmare scenario for the class of 2021,” said Jake Berg, a fourth-year student at the Kentucky College of Osteopathic Medicine in Pikeville. In March, students were abruptly pulled out of hospitals and medical offices, where they normally work with professionals to learn about treating patients. Over the space of less than two weeks, he said, medical students in “pretty much the entire country” transitioned from seeing patients in person to learning online.

“Everyone goes along with the idea that we’re all in the same boat together,” he said. “But, really, it’s like we’re all on the Titanic and it’s sinking.”

Megan Messinger, in her fourth year at the Western University of Health Sciences in Pomona, California, calculates she has lost about 400 hours of patient time. She worries “the class of 2021 is going to be the dumb class of interns,” said Messinger, who hopes to do a combined residency in pediatrics and psychiatry. “I feel very behind.”

The problem is most acute for medical students in their third and fourth years of study. Year three is when most medical students do their “core clinical clerkships.” These are one- or two-month stints in hospitals and clinics, through which they get the flavor of specialties such as internal medicine, pediatrics, surgery and obstetrics/gynecology.

Fourth-year students tend to spend time in more specialized options, often traveling to get experience in specialties in short supply at their own medical school’s affiliated hospitals, and also to informally “audition” at places they might like to apply to for residency. Because of the coronavirus pandemic, however, “away rotations” have been suspended, and residency interviews for next year’s graduating class will be done virtually.

Schools and hospitals are trying to restore the core clerkships but, in many areas, this is a work in progress. The uncertainty adds considerably to students’ stress levels.

“I have no idea how I will learn about the culture of the hospitals I’m applying to,” said Garrett Johnson, a fourth-year student at Harvard Medical School. On one hand, this year’s class of doctors-to-be will save a lot of money — typically, travel and housing costs for away rotations and in-person residency interviews are paid by the students. On the other hand, he said, “you don’t get to meet any of the people or get a feel for the place.”

Karissa LeClair, a fourth-year student at the Geisel School of Medicine at Dartmouth, agreed. “I was looking forward to getting to know places I had not been to previously,” she said. 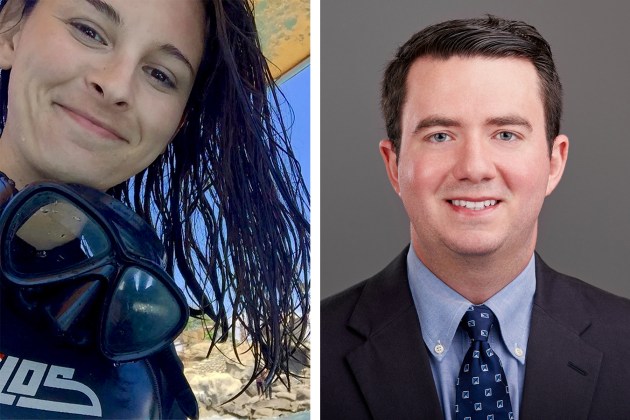 Left: Karissa LeClair, a fourth-year student at the Geisel School of Medicine at Dartmouth, applied to core clinical clerkships in New York City, Boston and Ann Arbor, Michigan ― but all were canceled. (Karissa LeClair) Right: Because of the pandemic, “away rotations” have been suspended for med students at the Kentucky College of Osteopathic Medicine. “It’s a nightmare scenario for the class of 2021,” says Jake Berg, a fourth-year student. (Raymunda Garza)

LeClair, who wants to become an ear, nose and throat specialist, said clerkships she applied to in New York City, Ann Arbor, Michigan, and Boston were all canceled.

Since she was not planning to be in New Hampshire for most of this year, LeClair now has no place to live near Dartmouth. “I’m piecing together sublets and staying with friends,” she said. Unless something changes, she will spend her final year of medical school only in facilities formally affiliated with Dartmouth.

Messinger is facing similar problems in Southern California. “I’m at Cedars right now, and loving it,” she said, referring to Los Angeles’s Cedars Sinai medical center. “But you can only do one rotation there. I don’t have anything scheduled after this. My only audition rotation, at Tulane, was canceled.”

Administrators are sympathetic. “They have had major disruption,” said Dr. Alison Whelan, chief medical education officer for the Association of American Medical Colleges, which oversees M.D.-degree programs. “Medical school is stressful, and with COVID it’s even more stressful.”

“I feel for the students, they’re really in a tough position,” said Dr. Robert Cain, president and CEO of the American Association of Colleges of Osteopathic Medicine, which oversees osteopathy programs. About 1 in 4 U.S. medical students pursue a doctorate in osteopathy, which is similar to an M.D. degree but includes training in hands-on manipulative techniques and more emphasis on whole-body health.

Starting this year, M.D. and D.O. students are competing for the same residency training programs and work side by side, a change planned before the pandemic.

One hurdle is that all these students, in order to become well-rounded doctors, need to see a broad mix of patients with a diverse group of medical issues. But even at hospitals and clinics that have resumed general care, patients with ailments other than those associated with COVID-19 are not showing up, because they are afraid of catching the coronavirus. Elsewhere elective procedures have been canceled or postponed.

“That has become a challenge,” Whelan said. In areas with high COVID-19 rates, hospitals and other facilities often do not have enough personal protective equipment for even essential health personnel, so students are kept out. 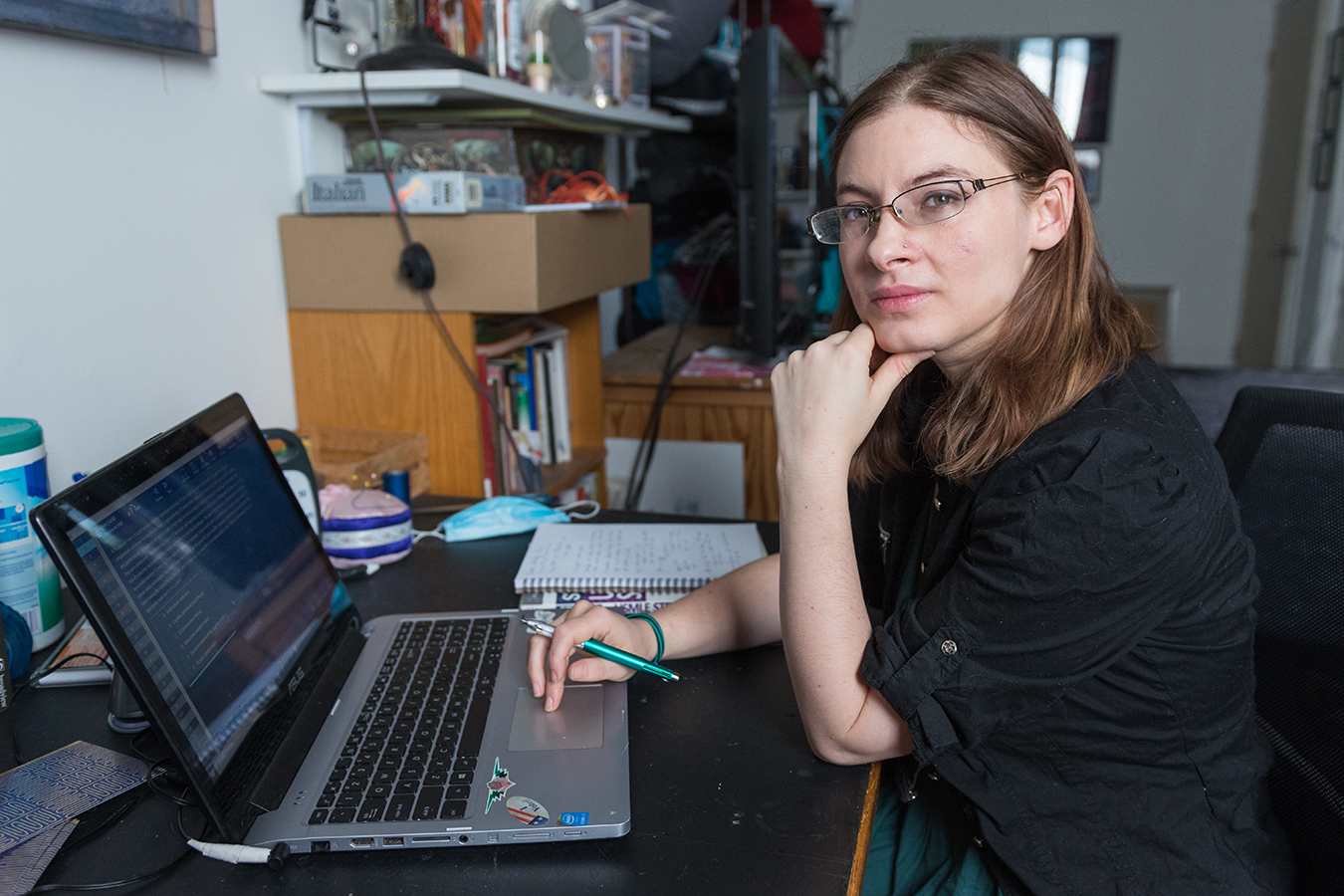 Fourth-year medical students like Megan Messinger tend to spend time in more specialized options, but COVID-19 is disrupting their education. “The class of 2021 is going to be the dumb class of interns,” Messinger says. (Heidi de Marco/California Healthline)

The AAMC in August updated its guidance on student participation in clinical rotations. It continued to leave decisions about allowing students into patient care areas up to individual teaching hospitals and medical schools. But it also noted that while students are not technically essential in day-to-day care activities, “medical students are the essential, emerging physician workforce” whose learning is necessary to prevent future medical shortages.

“The progression of students over time for relatively on-time graduation is essential to the physician workforce,” Whelan said. Enabling students to finish their education in the COVID-19 era “is an ongoing, complex, jigsaw puzzle.”

Both the M.D. and D.O. organizations said third-year students can still complete most of their required rotations, although perhaps not in the usual order, and schools have dramatically increased their use of online teaching of diagnostics and care.

“A fair amount of what students do is observation,” she said. “So schools have created step-by-step videos.”

And some educators are confident these students will catch up — eventually. “Most learning goes on during your residency,” said Dr. Art Papier, who teaches dermatology at the University of Rochester medical school. “I think it can all be made up.”

In addition to losing in-person patient contact, medical students face obstacles in taking required national board examinations — there are several types and are not always conveniently offered near their training sites.

After having one required test canceled on short notice, student Jake Berg had to reschedule. The first open seat was three hours away and a couple of weeks later; then his canceled test was reinstated.

The exam that tests clinical skills has been postponed for all M.D. students but is expected to be rescheduled.

The comparable exam for osteopathic students, however, has been made optional. That’s partly because D.O. students must demonstrate not only clinical skills, but also proficiency in physical manipulation techniques, which means they need to work with patients under the supervision of doctors as part of their test. But the D.O. clinical skills exam is offered only in two places: Chicago and outside Philadelphia.

“If there’s a self-isolation period, who can afford to spend two weeks in a hotel in Chicago or Philadelphia?” asked Messinger, of Western University.

While the travel may be a burden, the exams are needed “to protect the public” from doctors who have not demonstrated competence, said Cain, of the osteopathic colleges’ association.

Whelan and Cain said details are being worked out and changes are possible as the COVID situation evolves.

In the end, Cain said, this crop of students may emerge from COVID as better doctors than those who didn’t face such challenges.

“Hopefully, we’ll look back and see them as the class of resilience,” he said. “That they were able to work through some very hard times.”