Millions of Californians carry their Medi-Cal cards in their wallets and purses as proof of health coverage from the largest state Medicaid program in the country.

“It’s the face of Medi-Cal,” said Stan Rosenstein, a health care consultant in Sacramento who ended his 31-year career at Medi-Cal in 2008 as the state Medicaid director.

It’s a rather staid face. And old-school. Decades old.

But now it’s getting a facelift.

Rosenstein unveiled the program’s new card recently, at a 50th-anniversary celebration for Medi-Cal in Sacramento. It is more colorful, more California and definitely less bureaucratic.

Awash in California poppies, the card will start landing in mailboxes soon.

“The department is trying to bring this card into the mainstream,” Rosenstein said. “It will be something that’s much more friendly to people in Medi-Cal, something you can take pride in.”

The debut of the new card seems mostly symbolic. It doesn’t do anything the old card didn’t.

And of course, it doesn’t address some of the persistent problems that dog the program: complaints by medical and dental providers about low reimbursement rates, delayed access for some members to specialists and other care providers, and many other challenges.

Officials and health care experts said the new design reflects a changing — and growing — program that now provides health insurance to about a third of the state’s population.

“It’s a recognition that this is no longer your grandmother’s Medi-Cal program,” said Anthony Wright, executive director of the consumer advocacy group Health Access California.

In 2014, as part of the Affordable Care Act, Medi-Cal expanded its eligibility to include people with higher incomes and adults without kids, among other changes. Since then, enrollment has exploded.

“Even people who have been middle-income in their careers but are between jobs now have Medi-Cal to fall onto,” Wright said. “It’s appropriate the card looks closer to what a private insurance card looks like.” 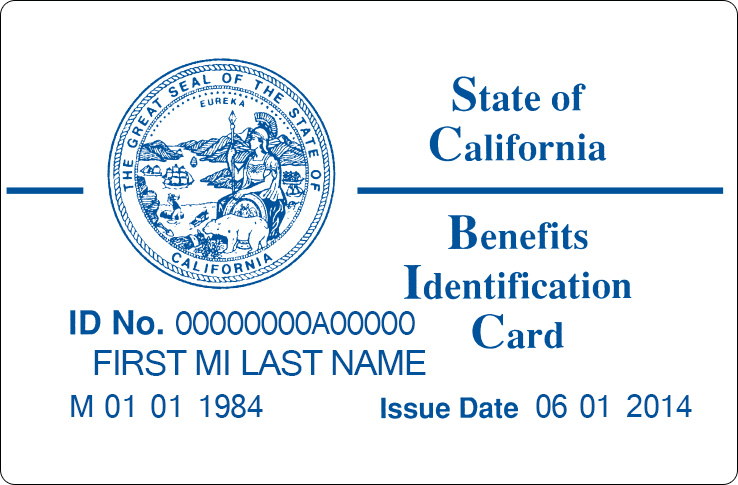 The current Medi-Cal identification card, which debuted in 1994, marked technological progress because of its magnetic strip. (Courtesy of the California Department of Health Care Services)

It’s unclear exactly when the new cards will be released. At the anniversary event, Rosenstein said they will begin rolling them out to members this summer. Later, Williams backtracked, saying “we have not set a production date at this time” because the department needs to prepare doctors and other Medi-Cal providers for the change first.

The department started its outreach efforts to providers last week, he said.

When the new cards are distributed, they will go first to new enrollees and current enrollees whose cards have been lost or stolen, Williams said.

After that, they likely will be distributed to members when they renew their eligibility annually, he said.

The cost of the new cards is minimal because the design was created in-house and the department will use the same printing machines that produce the current cards, Williams said.

In Medi-Cal’s early days, paper Medi-Cal cards were mailed to members every month with adhesive stamps on them, Rosenstein said. When members went to doctors or other providers for certain types of services, such as vision or chiropractic care, they handed over one of the stamps, which the provider would stick onto the claim.

“That’s not a great system for automation,” he said.

So when the current card was introduced in 1994, its magnetic strip marked a “big advancement for Medi-Cal,” Rosenstein said.

Its design, not so much.

“The intent was to have an official, ‘government-looking’ card,” he said.

Williams said the plan for the new card was the opposite.

“We want to make it look less bureaucratic. The old one looked like your typical public-assistance card,” he said. “As we evolve, Medi-Cal is more than just a program for low-income people.”

Medi-Cal Cards Getting A Facelift