Alondra Diaz can’t get enough of Elmo and Barney, and she adores picture books.

The 14-year-old, who will enter high school next week, has several complex and debilitating medical conditions, including epilepsy, microcephaly and a mitochondrial disorder. Her long-standing team of doctors — a neurologist, geneticist, orthopedist, pediatrician and others — is primarily based at Cedars-Sinai Medical Center in Los Angeles, where Diaz lives.

But Diaz may lose access to that team because of a recent move by the state agency that administers Medi-Cal, California’s version of the Medicaid health insurance program for low-income residents.

Like Medicaid programs in many states that want more budgeting certainty or hope to save money, Medi-Cal is shifting many patients like Diaz, with complex conditions, into managed care plans. The plans agree to cover enrollees for a fixed amount per month. But in doing so, they often rely on narrow networks of physicians that do not include the patients’ doctors.

“The care and the attention that she gets and has been getting would not be the same,” said Diaz’s mother, Maria Colin, 45, who spoke through a Spanish-language interpreter. “Instead of going forward, she would be going backward in her development.”

Thirty-nine states use managed care to cover all or part of their Medicaid populations, according to the Kaiser Family Foundation. (California Healthline is produced by Kaiser Health News, an editorial independent publication of the foundation.)

In 28 of those states, at least 75 percent of Medicaid beneficiaries were enrolled in managed care last year, and those numbers are likely to increase. About 80 percent of California’s 13.5 million Medi-Cal members are now in managed care. 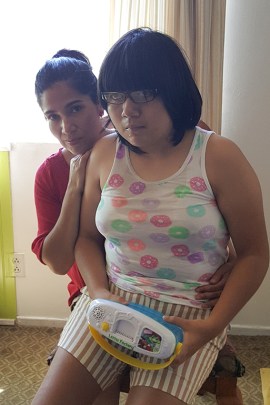 Alondra Diaz, 14, sits with her mother, Maria Colin. Diaz has epilepsy, microcephaly and other severe medical conditions, but the state Department of Health Care Services overturned an administrative law judge’s decision that would have allowed her to stay with her team of specialists. (Courtesy of Maria Colin)

In January, the California Department of Health Care Services (DHCS) overturned a ruling by an administrative law judge that would have allowed Diaz to stay in the traditional form of Medi-Cal — known as fee-for-service — and keep her doctors. Instead, the department said she must switch to a managed care plan with which her doctors do not contract.

Two health consumer advocacy groups, Neighborhood Legal Services of Los Angeles County and Western Center on Law and Poverty, sued DHCS Tuesday to help Diaz and the dozens of other Medi-Cal members who’ve had similar rulings overturned by the state.

The lawsuit, filed in Los Angeles Superior Court, alleges that the department is contradicting doctors’ opinions and illegally reversing decisions by administrative law judges that would allow patients with complex medical conditions to remain in fee-for-service Medi-Cal.

“As a result, they’re putting our clients at great medical risk,” said Mona Tawatao, a senior attorney for Western Center.

The department said it does not comment on pending litigation.

In fee-for-service Medi-Cal, patients can see any doctor who accepts them, and providers are reimbursed for each medical service or visit. Under managed care, the state contracts with health plans to deliver benefits to enrollees and pays them a fixed monthly premium to cover the expense of doing so — a payment system known as “capitation.”

Managed care encourages providers to offer preventive care and to scrutinize every test or treatment, since they bear financial risk if they go over budget.

But budget concerns are not the only reason to move patients to managed care, he said. Medicaid enrollees “tend to be the sickest, the frailest, the most medically complex and most expensive patients in the country,” and their medical care needs to be managed, he said. “You really want some kind of entity or some kind of organized involvement in how to best provide comprehensive, holistic care to that patient.”

But shifting to managed care comes at a price for some patients: They must remain within the plan’s network of providers, and that can mean losing their medical team.

That is the case with Diaz.

In California, Medi-Cal patients who are slated to move into managed care can appeal by filing a “Medical Exemption Request.”

As part of that process, the enrollee’s doctor must submit “evidence that [the patient] is unstable and that … treatment cannot safely be transferred to a managed care plan physician(s) of the same specialty or specialties,” according to DHCS.

An exemption lasts up to 12 months when approved, “and is dependent on an individual’s unique situation,” said department spokeswoman Carol Sloan.

From October through December 2016, the most recent quarter for which data are available, the department approved 66 percent of exemption requests and denied 34 percent.

When Medical Exemption Requests are rejected, members can then take their case to an administrative law judge, as Diaz’s family did.

For several years, Diaz’s Medical Exemption Requests had been approved by the department. But it rejected her latest request in July 2016, her mother, Colin, said.

Colin appealed to an administrative law judge on behalf of her daughter, and the judge ultimately agreed that Diaz should remain in fee-for-service Medi-Cal under the care of her existing medical team.

Diaz’s “treating physician certified that she has not stabilized to a level that would enable her to change physicians and begin receiving care from a plan provider without deleterious effects,” the judge wrote.

But the health care department, in its January order reversing the judge’s decision, asserted that “there is no evidence of clinical or physical instability. … The beneficiary is currently stable for transfer to a managed care plan.”

The lawsuit targets such reversals, arguing that in overturning the judges’ decisions, the department is not abiding by its own rules.

In the past two years, roughly 130 Medi-Cal patients — primarily in Los Angeles County — have had decisions in their favor overturned by the department, said Ella Hushagen, a staff attorney for Neighborhood Legal Services.

“When there’s evidence from the treating physician that the patient is too unstable to move into a managed care plan, the department is not following that standard,” Tawatao said. “The department should follow the rules.”

The suit seeks redress for Medi-Cal recipients who have already had judges’ decisions overturned, as well as those who may appeal in the future. It covers most Medi-Cal recipients, including those in Los Angeles County, Tawatao said. Some beneficiaries may not be affected because they live in counties with different medical-exemption rules, she said.

“These are people who are very fragile, with rare diseases and conditions for which there appear to be very few specialists,” Tawatao said.

Diaz and her family are working separately with Neighborhood Legal Services to contest the department’s reversal. The soon-to-be ninth-grader remains in fee-for-service this month while that appeal is pending, Hushagen said.

Diaz was placed in managed care for a few days earlier this month before advocates got her out. During that time, she couldn’t get her epilepsy medication refilled, and the mobile nurse who visits her three times a week didn’t have authorization to help.

Meanwhile, Diaz’s medical needs mount. She had to start using a wheelchair last year after she kept falling and doctors discovered her right leg was longer than her left.

Her doctors are now investigating whether she has petit mal seizures every night when she sleeps. Her last grand mal seizure landed her in the hospital in October.

If she moves to managed care, “we would have to start all over again with new doctors. It’s like starting from scratch,” Colin said. “That’s time wasted that she needs to be spending with her doctors receiving treatment.”