McKinley County, N.M., has the nation’s highest rate of Medicaid enrollment, and people there say it is vital to battle daunting economic and public health challenges.

GALLUP, N.M. — On a crisp sunny day, Tyson Toledo, a precocious 5-year-old boy, hobbled into a private health clinic to have his infected foot examined.

Pediatrician Gayle Harrison told his mother to continue to apply antibiotic ointment and reminded them to come back if the swelling and redness worsened.

The appointment at Rehoboth McKinley Christian Health Care Services’ outpatient center comes at no charge for the Toledo family, who live 30 miles away on the Navajo Nation Reservation. That’s because Tyson is covered by Medicaid, the state-federal health insurance program for the poor.

New Mexico leads all other states in Medicaid enrollment, with 43 percent of its residents on the program. That’s partly because the state has a large Native American population, living in communities historically riven with poverty. The numbers offer an eye-popping snapshot of the promotion of Medicaid expansion since 2013: Nearly a third of the 900,000 New Mexico beneficiaries joined as part of the Affordable Care Act’s option to expand Medicaid.

Kaiser Health News is examining Medicaid’s role in the U.S. as the health care program comes under renewed fire from Republicans who generally want to put the brakes on the program, even as many Democrats credit the expansion with reducing the number of uninsured Americans to historic lows. Conservatives view the costs as prohibitive for state and federal budgets.

Nina Owcharenko, a senior research fellow in health policy with the conservative Heritage Foundation, said the enrollment boost is “not a positive story.” While the high enrollment underscores the pervasive poverty in New Mexico, it also signals surging costs for taxpayers, she said.

“I am growing more concerned about the cost of shifting Medicaid dollars to the federal government and without a budget cap on the program. … That is a dangerous fiscal course for the country,” she said.

“This is a problem that needs to be fixed. … We need to find a way that is more rational and more fiscally sustainable,” said Owcharenko, who was a top Health and Human Services official in 2016. 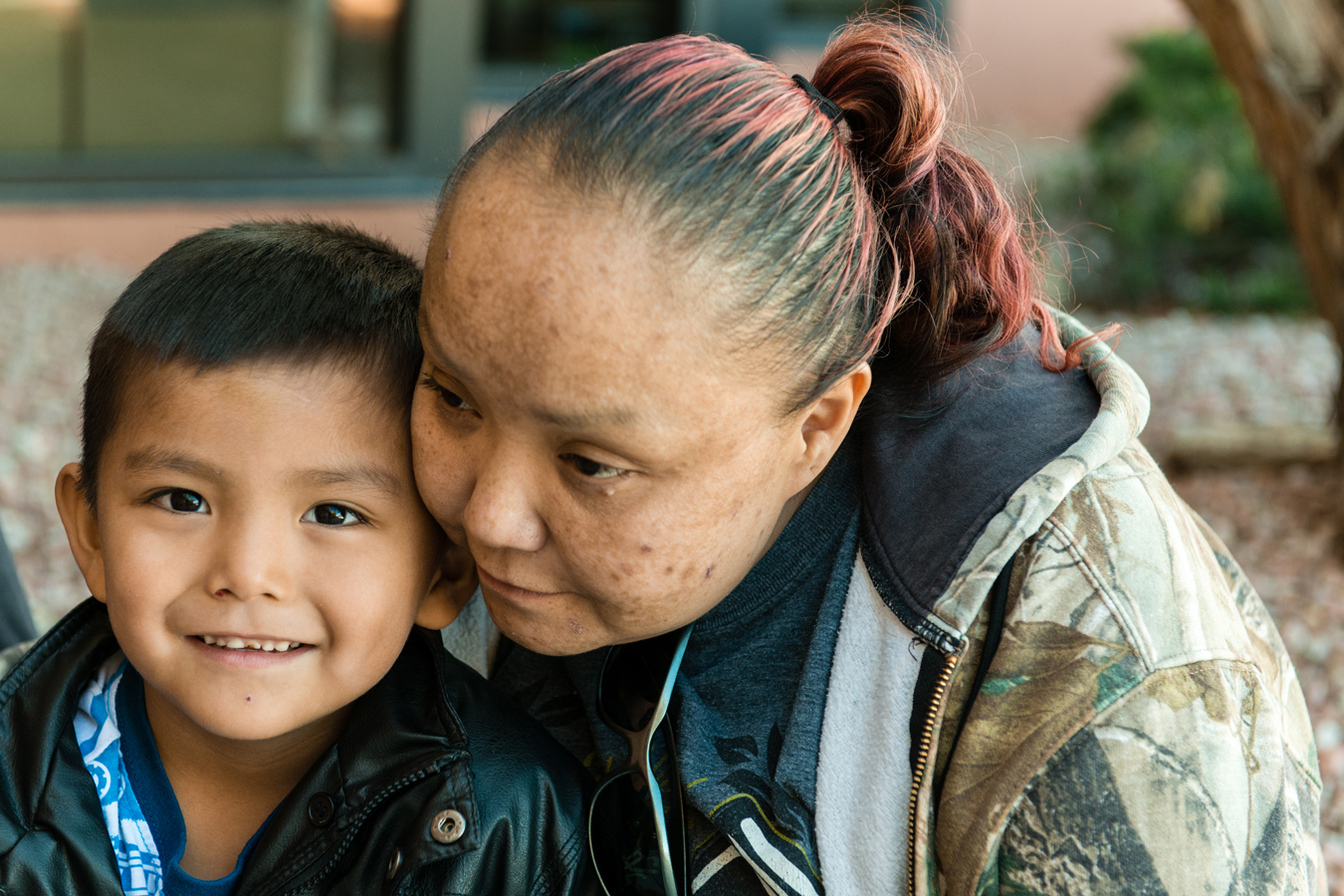 In Gallup, a city of about 23,000 people, Medicaid is as much a part of the fabric as Native American-crafted jewelry and green chile sauce. Recipients include the waitress at the downtown bar, the clerk at a loan store and the maid at the hotel.

And multigenerational families are common in Gallup and surrounding McKinley County. Tyson’s mother, grandmother, aunt and uncle also are enrolled in Medicaid.

Fifty-two percent of the county’s residents have coverage through the program. That’s the highest rate among U.S. counties with at least 65,000 people, according to a KHN analysis of Census data. 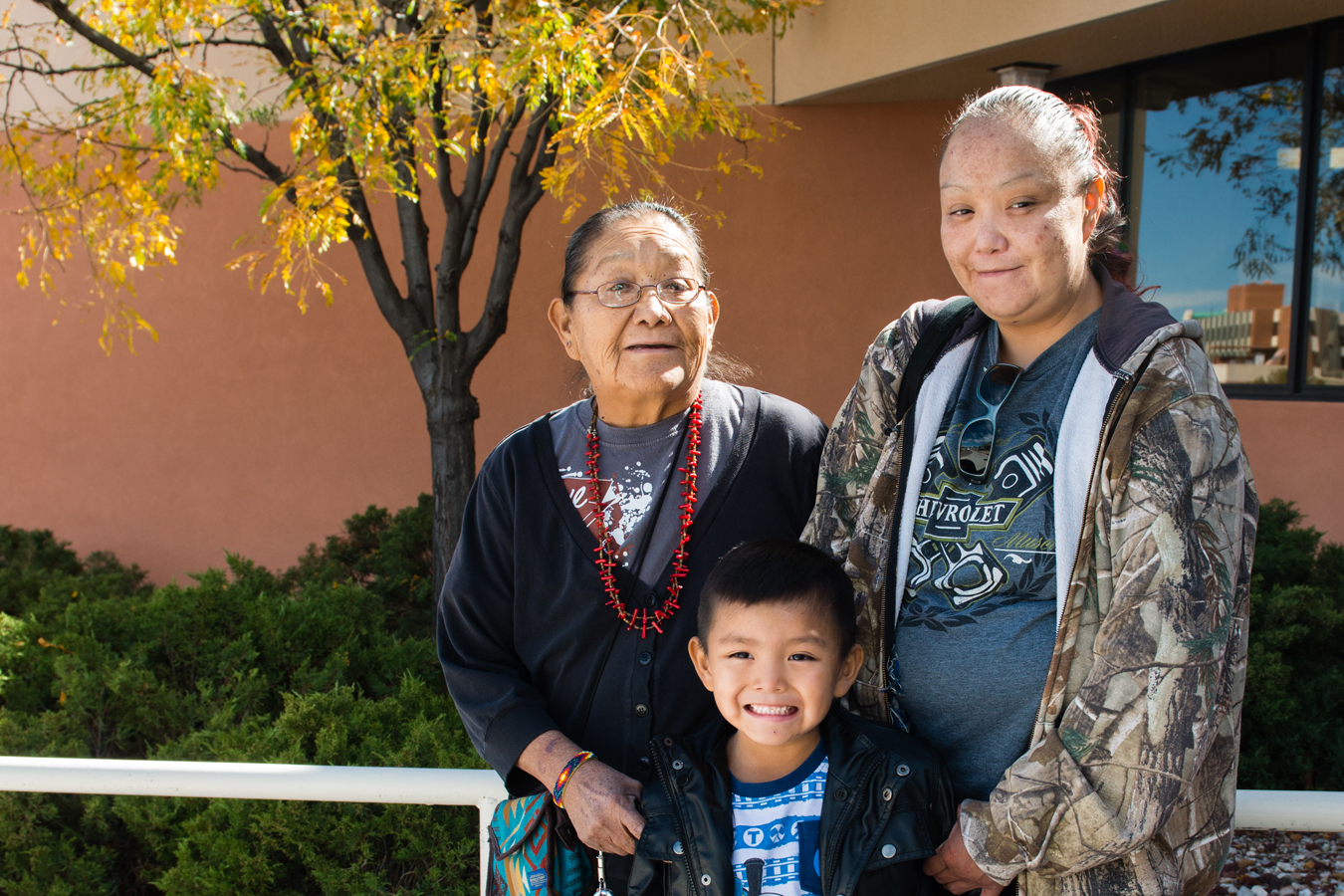 Tyson Toledo, his mother and grandmother are all are on Medicaid. Multigeneration Medicaid families are common in McKinley County, N.M., where 52 percent of residents are on Medicaid, the highest rate among U.S. counties. (Heidi de Marco/California Healthline)

“Pretty much everybody is on Medicaid here,” said Libby Garcia, 36, who lives in a trailer overlooking downtown Gallup.

Garcia, who works as a custodian at a local Head Start agency, quit a second job cleaning businesses because that extra income would put her over the eligibility level for coverage. She can’t afford private insurance, and Medicaid gives her free care at a community health center and insulin and other medicines for her diabetes without out-of-pocket costs, she said.

McKinley, where more than 40 percent of the population lives below the federal poverty level ($12,140 for an individual), is the nation’s only county of at least 65,000 people in which more than half the population is on Medicaid. Nationwide, about 23 percent of Americans are enrolled, with more than 16 million people added since the expansion.

In McKinley County, many residents see Medicaid as vital. There’s no stigma around it, and enrollees and providers speak positively about it. 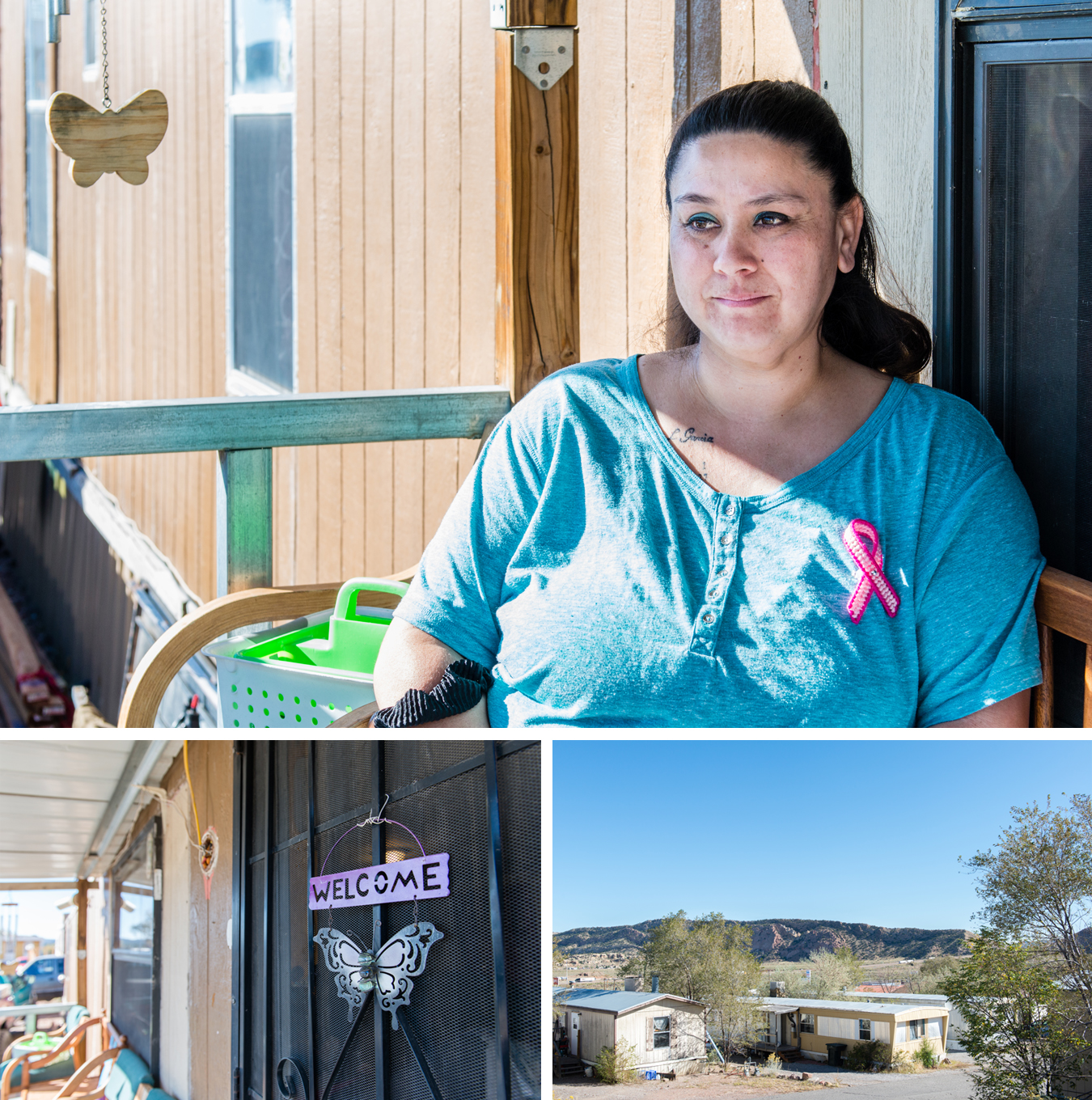 “Pretty much everybody is on Medicaid here,” Libby Garcia says of her mobile home community in Gallup, N.M. Garcia, who lives in a trailer overlooking downtown Gallup says she had to quit her second job because she would make too much to qualify for Medicaid. The federal-state program for low-income people enables her to get free care at a nearby community health center and afford insulin and other diabetes medication. (Heidi de Marco/California Healthline)

The heavy concentration of Medicaid in this high-altitude desert is a result of two factors: the high poverty rate and the Indian Health Service’s relentless work to enroll patients in the program.

Medicaid enrollees in Gallup say the coverage has opened up new opportunities for them to get more timely care, especially surgery and mental health services. It has been vital in combating high rates of obesity, teen birth, suicide and diabetes, according to local health officials.

Outside a local Dollar Tree store, Linda James, 55, who sells jewelry she makes, said Medicaid paid for her son’s braces and her teenage daughter’s drug rehabilitation. “It’s a lifesaver for us,” she said, noting it helps her get quicker care than waiting at Indian Health facilities.

For the Gallup Indian Medical Center — the main Indian Health Service facility in the area — Medicaid has stoked the local budget and eased overcrowding. When patients on Medicaid are treated there, the center is reimbursed by the program. That money supplements the Indian Health Service’s annual federal grant, which is set by Congress.

Last year, Medicaid funding made up 34 percent of the center’s $207 million budget. Among all U.S. hospitals, Medicaid provided only 18.5 percent of revenue. “Medicaid has become the safety net for the Indian Health Service,” said John Ratmeyer, deputy chief of pediatrics at the Gallup Indian Medical Center. “It’s providing an extra pod of money to pay for services not within our hospital system.”

Medicaid this year is projected to add more than $800 million to Indian Health Service hospital funding, supplementing the $4.8 billion in annual federal appropriation.

The medical center in Gallup looks like a relic of the 1960s, with fading-blue exterior walls, sandstone-colored outpatient trailers, cramped nursing stations and hard plastic seats in its emergency room waiting area. The hospital doesn’t have an MRI machine or any designated private patient rooms. 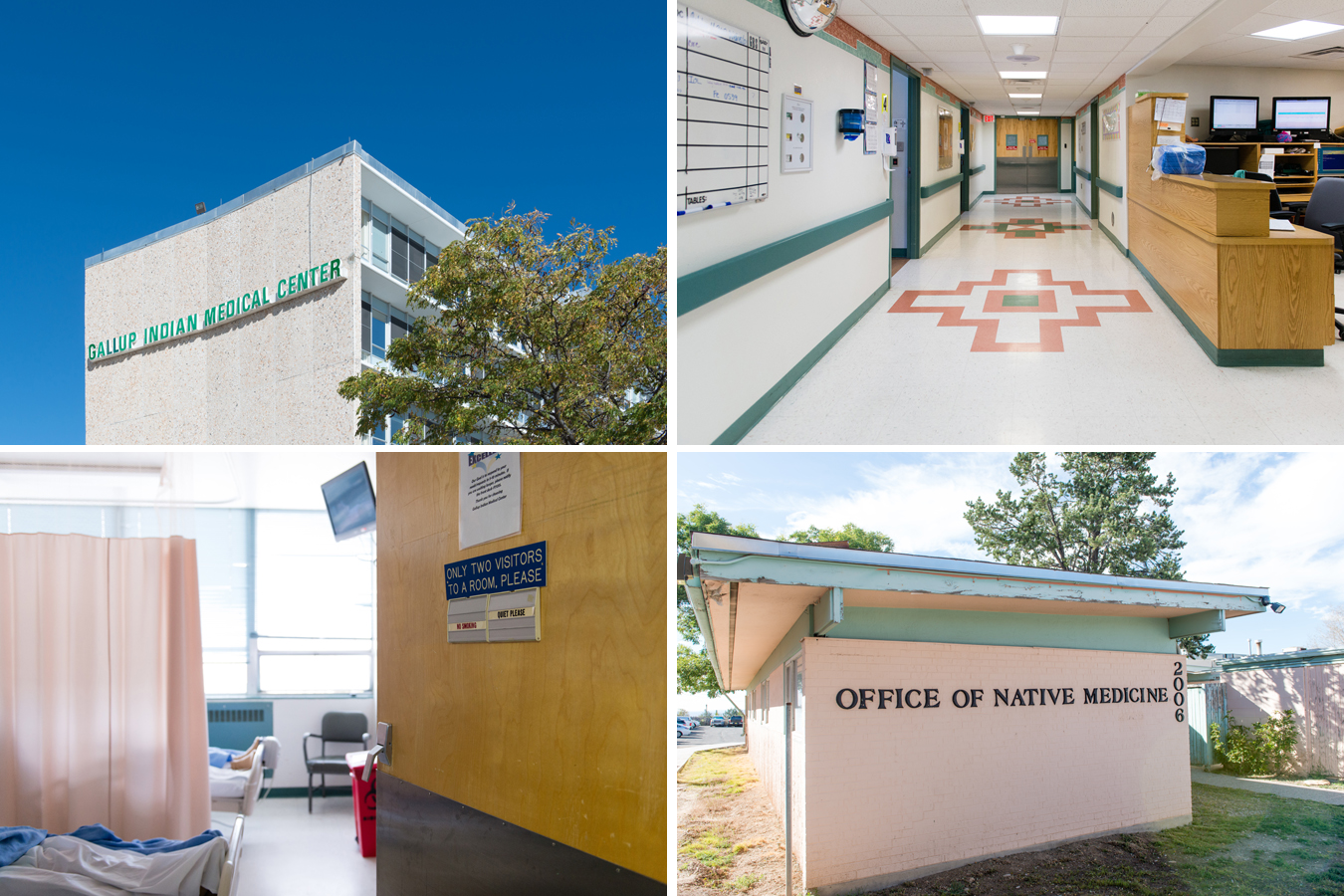 Native Americans can receive free care at Indian Health Service hospitals and its clinics, such as this facility in Gallup, N.M. (Heidi de Marco/California Healthline)

“One of our biggest challenges is just maintaining the building,” said Dr. Kevin Gaines, acting deputy clinical director at the hospital. The extra money coming from patients covered by Medicaid are helping the center pay for a badly needed $13 million modernization of its ER and urgent care unit, he said.

Another problem is a shortage of nurses and doctors, which leads to long wait times for patients — three or four months for primary care appointments or for dental services or eyeglasses. Some patients seeking specialized care need to go 140 miles to Albuquerque, a hardship for many Native Americans, some of whom don’t have access to cars or money for such transportation. But Medicaid will cover some non-emergency transportation for medical appointments.

The county has a host of medical challenges related to its economic problems. According to a 2016 report sponsored by Rehoboth McKinley, the county’s suicide rate for ages 10 and up is twice the U.S. average, alcohol-related deaths are nearly four times higher than the national rate, and teen birth rates are three times the U.S. average. Average life expectancy in McKinley is 74 years, four years less than the typical U.S. life span.

This kind of care doesn’t come cheap. The federal government paid the full cost of the expansion through 2016, but now New Mexico and other states have to pick up a 5 percent share. To deal with rising costs, the state in 2017 began cutting the fees it pays hospitals, doctors and other providers.

Asked about her Medicaid health plan while at a popular doughnut shop, Corrine Rosales, 60, of Gallup, said it’s invaluable for her and her two young nieces, Mya and Destiny. Medicaid pays for her diabetes medications and helped Mya get treated for attention-deficit disorder.

“I don’t know what we would do without it,” she said.