Prescription drug prices are up, making policy experts increasingly anxious. But relief could come from a surprising source. Just ask Cheech and Chong.

New research published Wednesday found that states that legalized medical marijuana — which is sometimes recommended for symptoms like chronic pain, anxiety or depression — saw declines in the number of Medicare prescriptions for drugs used to treat those conditions and a dip in spending by Medicare Part D, which covers the cost on prescription medications.

The study, which appears in Health Affairs, examined data from Medicare Part D from 2010 to 2013. It is the first study to examine whether legalization changes doctors’ clinical practice and whether it could curb public health costs.

The findings add context to the debate as more lawmakers express interest in medical marijuana.

California became the first state in the union to legalize marijuana for medical use, when voters passed the Compassionate Use Act in 1996.

Ohio and Pennsylvania have passed laws this year allowing the drug for therapeutic purposes, making the practice legal in 25 states, plus Washington D.C. The question could also come to a vote in Florida and Missouri in November. A federal agency is considering reclassifying it under national drug policy to make marijuana more readily available for medical purposes.

Medical marijuana saved Medicare about $165 million in 2013, the researchers concluded. They estimated that, if the policy were nationalized, Medicare Part D spending would have declined in the same year by about $470 million. That’s about half a percent of the program’s total expenditures.

That is an admittedly small proportion of the multi-billion dollar program. But the figure is nothing to sneeze at, said W. David Bradford, a professor of public policy at the University of Georgia and one of the study’s authors.

“We wouldn’t say that saving money is the reason to adopt this. But it should be part of the discussion,” he added. “We think it’s pretty good indirect evidence that people are using this as medication.”

The researchers found that in states with medical marijuana laws on the books, the number of drug prescriptions dropped for treating anxiety, depression, nausea, pain, psychosis, seizures, sleep disorders and spasticity. Those are all conditions for which marijuana is sometimes recommended. Prescriptions for other drugs treating other conditions, meanwhile, did not decline.

The study’s authors are separately investigating the impact medical marijuana could have on prescriptions covered by Medicaid, the federal-state health insurance program for low-income people. Though this research is still being finalized, they found a greater drop in prescription drug payments there, Bradford said.

If the trend bears out, it could have meaningful public health ramifications. As doctors and public health experts grapple with the consequences of excessive prescription painkiller use, medical marijuana could provide an alternate path. Experts say abuse of prescription painkillers – known as opioids – is in part driven by high prescribing. In states that legalized medical uses of marijuana, painkiller prescriptions dropped – on average, the study found, by about 1,800 daily doses filled each year per doctor. That tracks with other research on the subject.

Questions exist, though, about the possible health harms or issues that could result from regular use.

It’s unlike other drugs, such as opioids, in which overdoses are fatal, said Deepak D’Souza, a professor of psychiatry at Yale School of Medicine, who has researched the drug.

“That doesn’t happen with marijuana,” he added. “But there are whole other side effects and safety issues we need to be aware of.”

“A lot of people also worry that marijuana is a drug that can be abused,” agreed Bradford. “Just because it’s not as dangerous as some other dangerous things, it doesn’t mean you want to necessarily promote it. There’s a lot of unanswered questions.”

Meanwhile, it is difficult to predict how many people will opt for this choice instead of meds like anti-depressants or opioids. 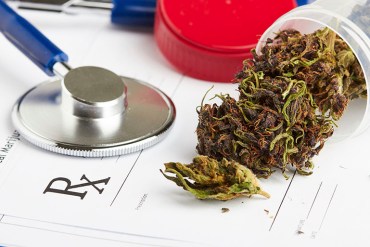 Because the federal government labels marijuana as a Schedule I drug, doctors can’t technically prescribe it. In states that have legalized medical marijuana, they can only write patients a note sending them to a dispensary. Insurance plans don’t cover it, so patients using marijuana pay out of pocket. Prices vary based on geography, but a patient’s recommended regimen can be as much as $400 per month. The federal Drug Enforcement Agency is considering changing that classification – a decision is expected sometime this summer. If the DEA made marijuana a Schedule II drug, that would put it in the company of drugs such as morphine and oxycodone, making it easier for doctors to prescribe and more likely that insurance would cover it.

Still, Bradford maintains that if the industry expanded and medical marijuana became a regular part of patient care nationally, the cost curve would bend because marijuana is cheaper than other drugs.

Lester Grinspoon, an emeritus associate professor of psychiatry at Harvard Medical School, who has written two books on the subject, echoed that possibility. Unlike with many drugs, he argued, “There’s a limit to how high a price cannabis can be sold at as a medicine.” He is not associated with the study.

And, in the midst of the debate about its economics, medical marijuana still sometimes triggers questions within the practice of medicine.

“As physicians, we are used to prescribing a dose. We don’t have good information about what is a good dose for the treatment for, say pain,” D’Souza said. “Do you say, ‘Take two hits and call me in the morning?’ I have no idea.”