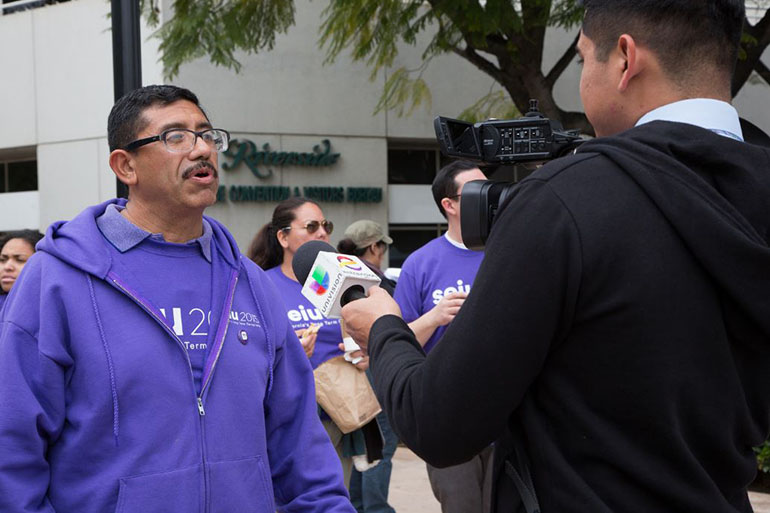 Enrique Camacho spoke about the adoption of California’s minimum wage law at a rally in Riverside in April. (Courtesy of SEIU Local 2015)

Enrique Camacho says his 22-year-old autistic son “looks practically normal,” but functions at the mental level of a two- or three-year–old.

That means just about everything he finds ends up in his mouth. One time, it was a razor, said Camacho, 52, of San Bernardino.

As a result, Camacho must watch his son, Francisco, full-time, and gets paid $10 per hour through In-Home Supportive Services (IHSS), a publicly financed program that helps some low-income elderly and disabled people receive care at home.

Starting next year, Camacho’s pay will rise because of a new California law that gradually increases the minimum wage. It will be $15 an hour by 2022 for businesses with more than 25 employees, and the same amount by 2023 for smaller workplaces. The current minimum wage of $10 per hour took effect in January.

The increases will be phased in annually. Next year, the minimum wage will rise to $10.50 for employers with more than 25 employees.

The roughly 400,000 IHSS caregivers in California, like Camacho, are among a larger number of home care workers who will benefit from the law, including employees of agencies that provide workers to families needing help.

“Home health care aides and personal attendants are among the lowest-paid jobs and the fastest-growing workforces in the country,” said Eileen Boris, Hull Professor of feminist studies at the University of California, Santa Barbara, who has written a book on the topic.

Last year, the mean annual pay for full-time home health aides was $26,700, according to data from the state Employment Development Department (EDD). Personal care aides made even less: $22,500. 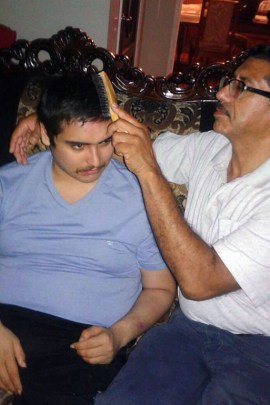 Enrique Camacho is a full-time caregiver to his son, Francisco, who has autism. Camacho will benefit from a new state law that will increase the minimum wage gradually to $15 over the next several years. (Courtesy of the Camacho family)

By comparison, the mean annual pay for the more than 16 million wage and salary jobs in California in 2015 was nearly $59,000, EDD statistics show.

The minimum wage law will benefit not only these “underpaid” workers, Boris said, but those who hire them.

“It’s also to the advantage of people to pay workers more because they get continuity of care. They get a higher caliber person. They don’t have as many people quitting,” she said.

Camacho expects he’ll use his raise mostly to buy necessities.

“After you pay bills and buy your groceries, after all that’s paid, there’s very little money left over for anything,” he said.

He’d like to buy more adult diapers and medicated creams for Francisco, and more clothing for all four of his children, he said.

“Sometimes we run out,” he said of Francisco’s diapers and creams. “This will help us afford those. Sometimes right now, we just can’t buy it.”

The state Legislative Analyst’s Office estimated that raising the minimum wage to $15 would increase the state’s payments to IHSS providers by between $1 billion and $1.5 billion annually.

That figure that doesn’t count the cost to people who pay for workers out of their own pockets.

Some worry that as the minimum wage rises, it will become harder for many families to hire home care workers — at least legally.

Kathy Janz, who runs a home care agency based in Menlo Park, believes the wage increase will lead people to hire workers under the table to keep their loved ones at home.

“They’ll totally go to the underground market. It will be huge,” Janz said. “You either break the law or you go to a nursing home.”

But that underground market already exists, said UC Santa Barbara’s Boris, and it’s hard to say whether it will grow as the minimum wage increases.

“Most people have limited budgets, but they also want to do the right thing for their loved ones,” she said. “You don’t want someone who will do harm. You don’t want a different person every week.” 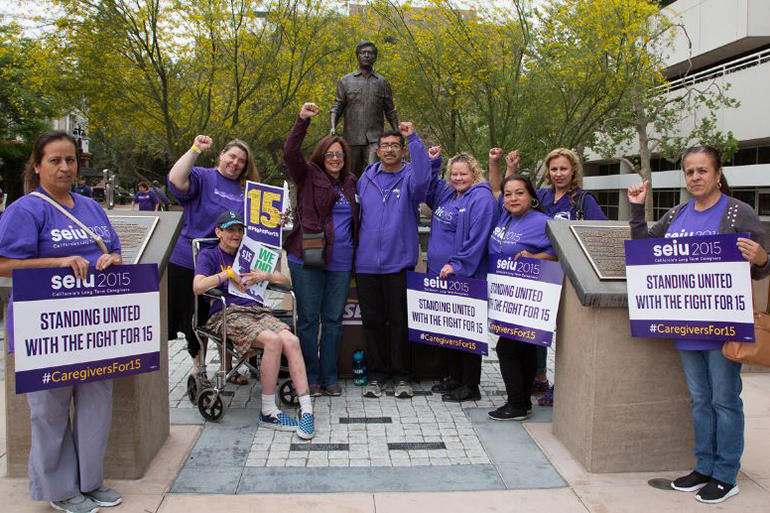 In April, Enrique Camacho, center, and other workers celebrated the adoption of California’s minimum wage law at a rally in Riverside. (Courtesy of SEIU Local 2015)

Data from the University of California, Los Angeles Labor Center, provided in conjunction with a report it issued last week on domestic employers in California, showed that 81 percent of those who employ home care workers already pay the minimum wage or more. (IHSS was excluded from the analysis because workers in that program are paid by the government.)

Viewed another way, however, the same statistic means that nearly one in five of those employers pay their home care workers less than the minimum wage.

The financial challenges faced by people who employ home care workers should not be solved on the backs of those workers, said Lindsay Imai, the Bay Area organizer for Hand in Hand, a national network of domestic employers who support workers’ rights.

“Workers should be paid a living wage. They do valuable work and should be fairly compensated,” Imai said.

Tara Animashaun, 37, of Crescent City, gets $10.50 an hour from the IHSS program to care for her 13-year-old daughter, Zyon, who has autism.

The single mother called the minimum wage increase “huge,” and expects it will give her some financial breathing room.

“Especially during the wintertime, it literally means we can pay our power and water bills and not have to worry about food and extra costs like diapers and medical care,” she said.