SACRAMENTO, Calif. — More than three years have passed since Asale Chandler’s teenage son was murdered in San Francisco. But Chandler said it feels as though it has been only three days.

The anguish doesn’t get better, said Chandler, a 55-year-old community activist from San Francisco at a rally here Tuesday. “It gets worse.”

Chandler’s 19-year-old son, Yalani Chinyamurindi, was one of four young black men who were shot and killed in January 2015 while sitting in a Honda Civic in the city’s Hayes Valley neighborhood. One man has been arrested in connection with the shooting.

On Tuesday, Chandler prayed, protested and communed with other mothers — and brothers, sisters, aunts and uncles — who have lost their loved ones to violence.

The “Mothers Fight Back!” rally came amid ongoing unrest over the police shootings of unarmed black men, including Stephon Clark, who was killed in his grandmother’s backyard in Sacramento in March. His death sparked large-scale protests that blocked traffic and disrupted Sacramento Kings basketball games.

But attendees of the rally noted they were speaking out against violence of all kinds, not just police brutality. They said they took to the Capitol steps to grab the attention of lawmakers and journalists. 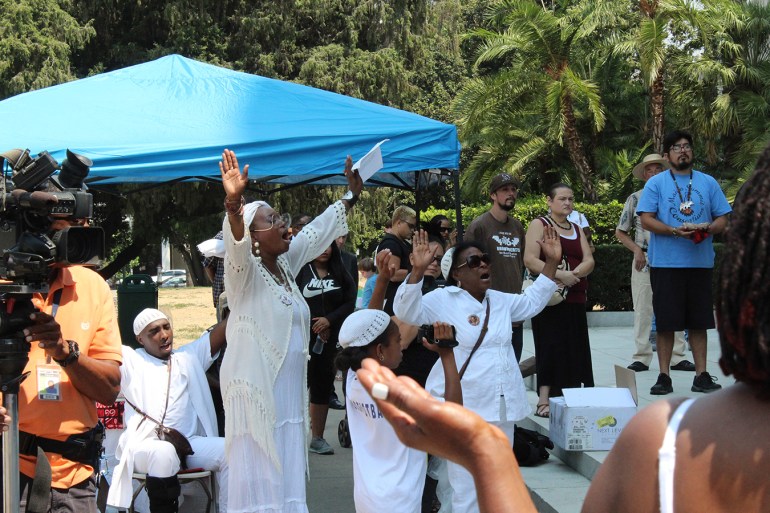 Asale Chandler’s son was murdered more than three years ago in San Francisco. On Tuesday, the community activist participated in a Hebrew “mother’s prayer” at the Mothers Fight Back! rally at the Capitol. (Alex Leeds Matthews/California Healthline) 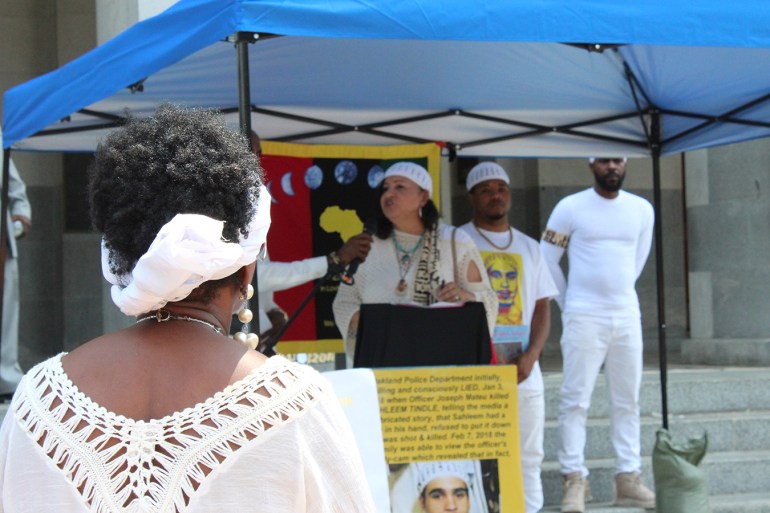 A few, like Chandler, are running for public office. Others participated to support their loved ones and join in solidarity with other mothers.

“You do want to connect to a mother or a father who’s been through it,” Chandler said. She hasn’t found solace through therapy or medication, but said being around other mothers whose lives were also transformed by violence is “the true medicine.”

The rally was passionate, but it wasn’t as pugnacious as its name might suggest. The moms came bearing snacks, handcrafted posters and children’s books. They sang and said prayers.

Participants said they are facing a dire mental health crisis fueled by violence, trauma and uncertainty.

“It’s traumatic for all of us. … We’re scared to death. We don’t know what to do, we don’t know how to act,” said Leia Schenk, 40, a social services worker in Sacramento, who is close with Sahleem Tindle’s family. Tindle was shot and killed by BART police near the West Oakland BART station in January.

Schenk said she struggles with the emotional fallout from the violence and fears for her children, particularly her two black sons. “It’s a helluva way to live,” she said.

Black children die from gun-related homicides at a rate nearly 10 times higher than that of white children, according to a 2017 study in the American Academy of Pediatrics. Another study published a few weeks ago showed that black men are at risk of being killed by police at a rate about triple that of white men.

The statistical differences are important, said Chet Hewitt, president and CEO of the Sierra Health Foundation, which awards grants to reduce health disparities.

However, the numbers don’t reveal the mental and physical pain that afflicts victims and their communities contending with violence, said Hewitt, who did not attend the rally.

Brooks, who has a 12-year-old daughter, attended the gathering to address the struggle many black parents encounter trying to protect their children from violence.

“Because there is no rhyme or reason to our people getting killed, that means there’s no one to tactically figure out how to avoid it,” said Brooks, 41. “We teach our children everything we can about how to stay alive.” 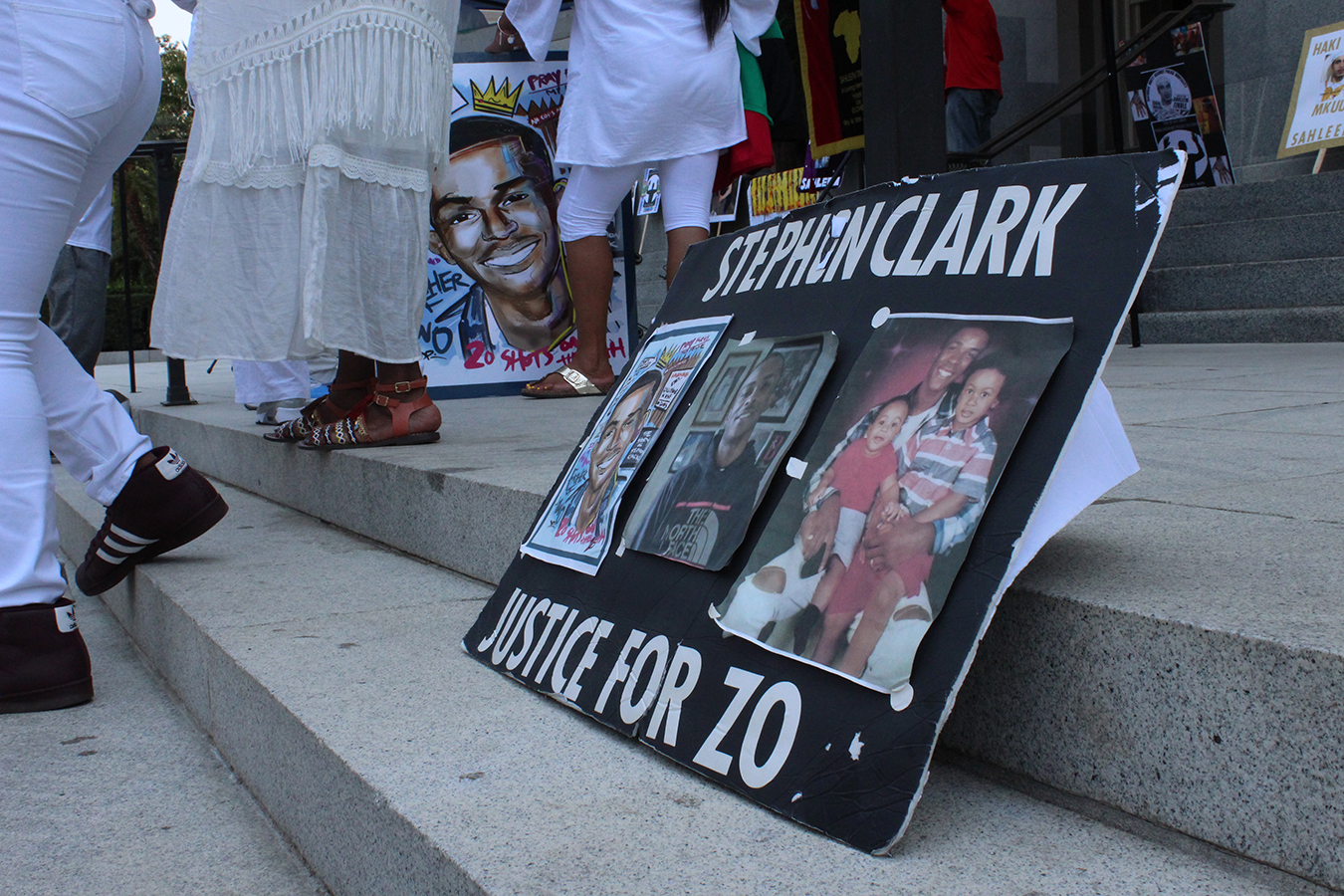 A poster commemorating Stephon Clark, who was killed by Sacramento police in March, sits on the Capitol’s steps during the Mothers Fight Back! rally.(Alex Leeds Matthews/California Healthline)

That trauma, fear and uncertainty has measurable effects on health.

According to the American Psychological Association, more than 25 percent of African-American youths exposed to violence are considered at risk for post-traumatic stress disorder. Symptoms of PTSD include anxiety, flashbacks and difficulty sleeping.

Community cohesion can help people heal from acts of violence, but violence can also erode that sense of togetherness, said Flo Cofer, director of state policy for Public Health Advocates, a nonprofit organization that works to address health disparities.

Many of the communities most affected by violence also face other physical and social  challenges like poverty, hunger and educational obstacles, she said.

“That’s part of the reason why the violence is so devastating. This is happening in a place where trauma is the air they breathe,” Cofer said in a phone interview.

At the rally, the low-key gathering of approximately 50 people consisted mainly of women and children. Moms parked strollers under a tent while their former occupants munched on crackers or toddled on the Capitol steps.

As one little girl, dressed in flowery overalls and shimmery sandals, danced to the “Circle of Life” song, adults and older children, dressed in white, surrounded her, clapping to the beat.

When the mothers gathered for a Hebrew “mother’s prayer,” Chandler stood near the front with her arms stretched above her head.

She is running for the Board of Supervisors in San Francisco to address the violence in her Bayview-Hunters Point neighborhood. “I’ve seen nothing but yellow tape, and it messed me up so badly,” she said.

Banks Reed’s son was the young man who was killed nearly seven months ago near the BART station. She said she knows the mental toll will be lifelong.

“It’s a life sentence for a mother,” she said. “A mother should not lose her children.”

Moms Fight Back Against Violence In Their Communities